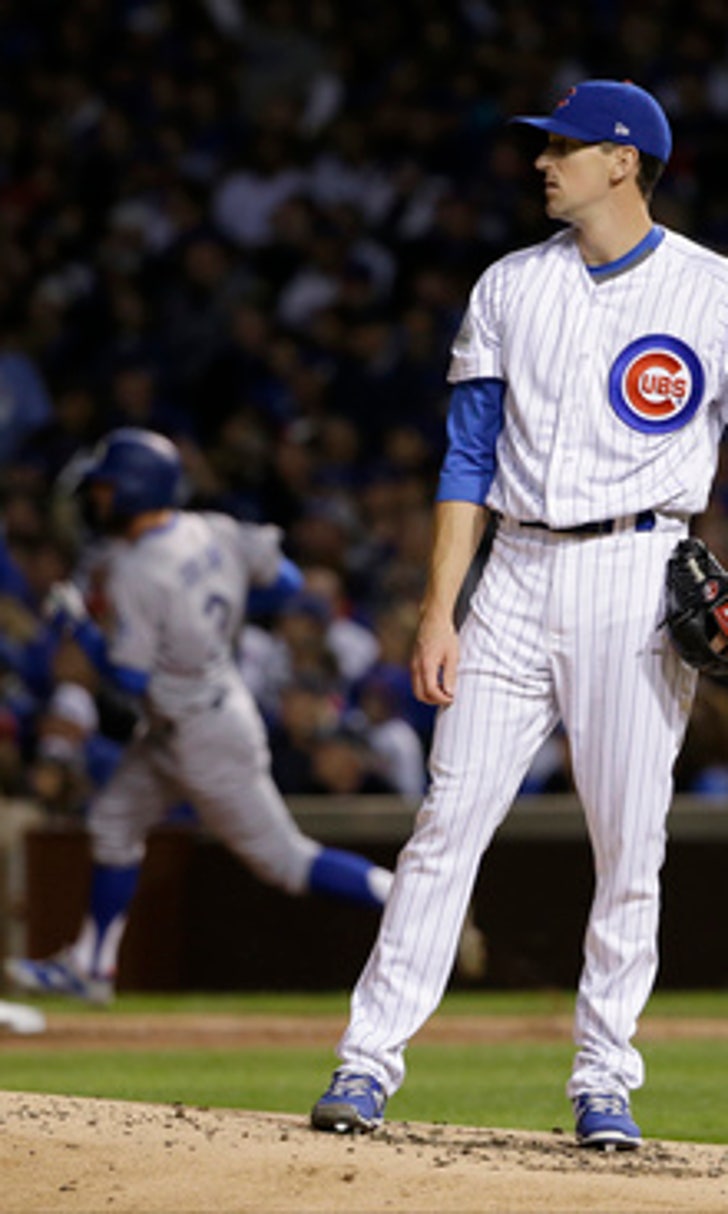 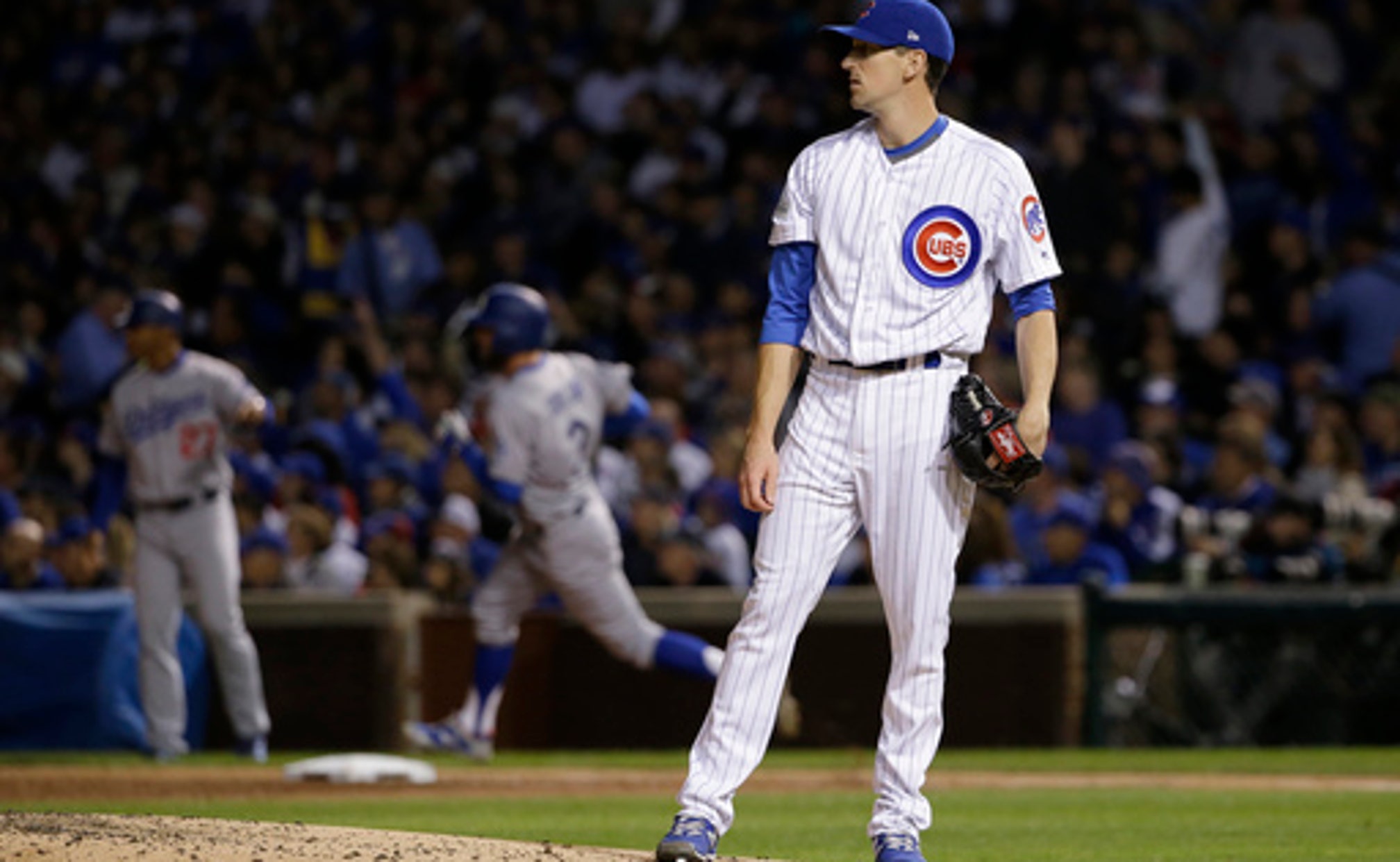 CHICAGO (AP) Kyle Schwarber had fans roaring, thinking the Chicago Cubs just might be ready to tighten the NL Championship Series against the Los Angeles Dodgers.

Turns out, his home run in the first inning was about all they had to cheer.

Yu Darvish shut down Chicago after Schwarber went deep, putting the Cubs on the verge of being swept in the NLCS for the second time in three years after Tuesday's night's 6-1 loss.

After knocking out Los Angeles last fall on the way to their first World Series championship since consecutive titles in 1907 and 1908, hopes of another parade are just about dashed.

''Tomorrow is a Game 7. We have three or four Game 7s in a row coming up right now,'' manager Joe Maddon said.

Jake Arrieta will try to keep the series going when he opposes Dodgers lefty Alex Wood on Wednesday night. Arrieta can become a free agent this winter, so it might be his final start for Chicago. And unless the Cubs get their offense and struggling bullpen in order, the season could come to a close.

Chicago has been in tough spots before, rallying from a 3-1 deficit to beat Cleveland in seven games for the World Series title last year. The Cubs also pulled out a wild victory at Washington in Game 5 of the Division Series this month after failing to close out the Nationals at Wrigley Field.

''I don't think there's any need to change anything,'' said Kris Bryant, who had two hits after going 1 for 8 through the first two games of the series. ''I think we can even play more loose because ... no one's expecting us to come back except the guys in this room.''

It was Bryant who asked ''why not us?'' after the Cubs won Game 5 to send the 2016 World Series back to Cleveland and start their historic comeback. It will take another epic effort to knock off Los Angeles, particularly the way they are hitting.

The Cubs are batting .160 with four extra-base hits through three games.

''Of course we expected more,'' Maddon said. ''It's somewhat surprising. I don't want to use the word disappointing.''

Batting second, Schwarber hit an opposite-field drive to left-center for a 1-0 lead in the first.

Darvish took the Cubs and the crowd right out of it, holding Chicago to one run and six hits in 6 1/3 innings. Chicago starter Kyle Hendricks couldn't match him.

The right-hander gave up four runs and six hits, including solo homers to Andre Ethier and Chris Taylor. It was his second straight shaky start after outpitching Nationals ace Stephen Strasburg in a dominant effort to win Game 1 of the NLDS.

Los Angeles led 3-1 with runners on first and second and none out in the sixth when Carl Edwards Jr. - erratic in the playoffs after a strong season - relieved Hendricks and walked Austin Barnes with one out. Joc Pederson flied out and Edwards walked Darvish on four pitches. After Taylor struck out to end the rally, boos came ringing from the Wrigley Field stands.

Struggling reliever Mike Montgomery gave up two more runs in the eighth. With runners on first and second, pinch-hitter Charlie Culberson struck out, only for the pitch to ricochet off catcher Willson Contreras' arm for a passed ball that allowed Logan Forsythe to score. With runners at the corners, Kyle Farmer followed with a sacrifice fly.

The Cubs could be on the way out, after barely squeezing past Washington. They experienced more drama on their way out west after that draining series.

Their cross-country flight to Los Angeles made an unscheduled stop in Albuquerque because Jose Quintana's wife, Michel, experienced an irregular heartbeat. The team remained on the ground for five hours to change pilots.

Quintana joined his teammates in Los Angeles on Friday night and started Game 1 the following night.

The Cubs could be excused for feeling a bit drained. Though Schwarber shot down that idea, saying, ''We're not running out of gas at all,'' Russell notices some signs of fatigue.

''I wouldn't say we're running out of gas,'' he said. ''I would just say some things here and there are a little bit fatigued. But we put the right guys out there every single day.''