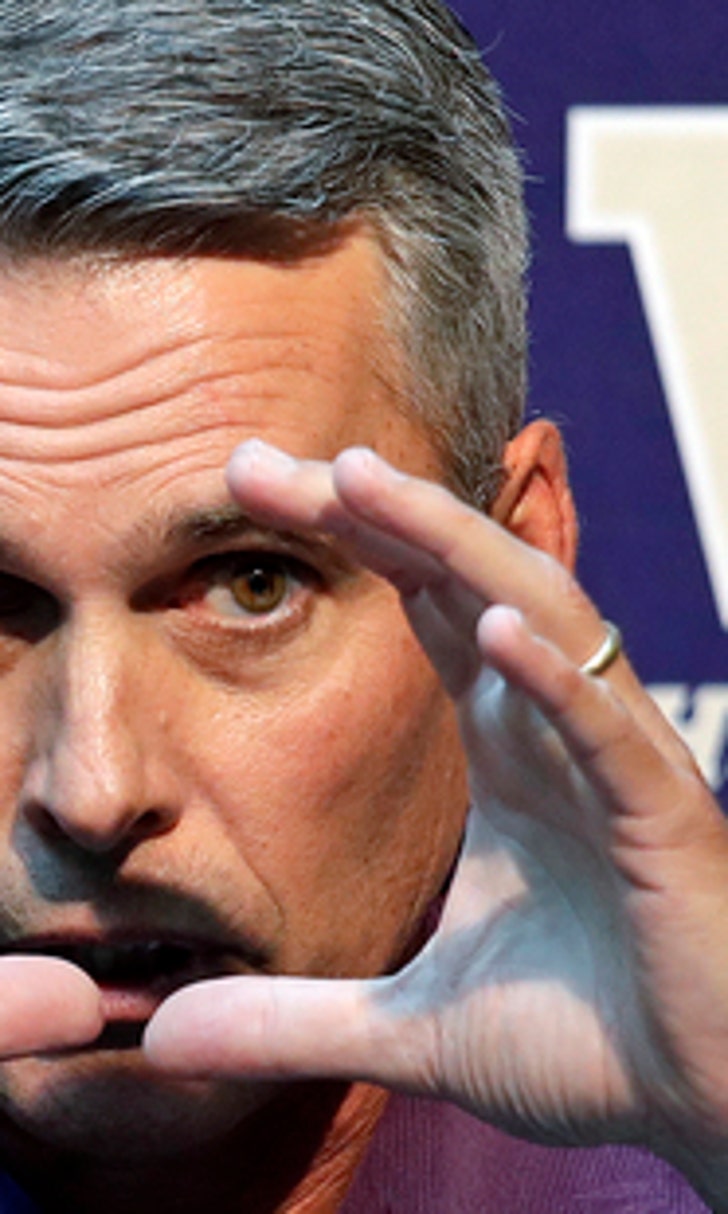 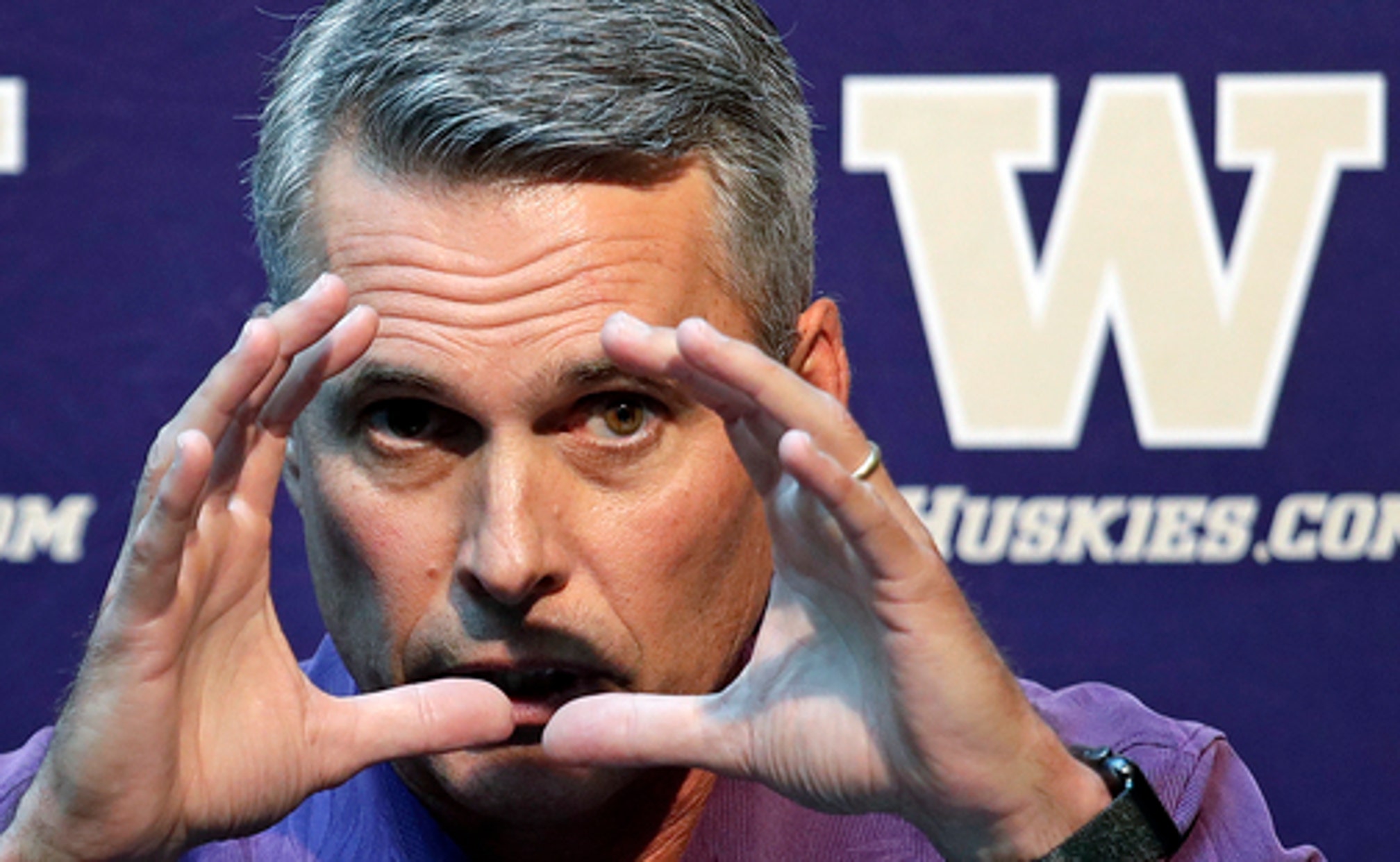 SEATTLE (AP) Chris Petersen got a brief respite from the talk of the high expectations facing Washington on the eve of fall camp.

Rather than talking around questions about the Huskies being a likely top 10 team when the AP Top 25 is released later this month or about the opener against powerhouse Auburn, Petersen was able to deflect momentarily as jets roaring overhead allowed him to share a memory and show a side of himself rarely seen in a formal setting.

''Oh, they're here,'' Petersen said as the U.S. Navy's Blue Angels roared over the Washington campus Thursday. ''That makes my stomach queasy. They made me throw up back in the day, but that's a different story.''

Eventually there was some talk about the Huskies and what lies ahead before the Sept. 1 season-opener in Atlanta against Auburn. But sandwiched in between football questions was a highly entertaining story from the Huskies' leader as the Blue Angels practiced over Lake Washington ahead of their weekend performances in Seattle.

The year was 2008. Petersen was the coach at Boise State and he was invited to be a celebrity passenger when the Blue Angels performed at the Air Magic Valley Air Show in Twin Falls, Idaho.

''I don't even know how to explain this,'' Petersen said. ''I mean it was the most painful half-hour of my life. I mean, I was up in the middle of this going, `Please stop this ride, this is not fun.' What it does gives you so much respect for those guys up there. Like when they would really be in combat, and maneuvering and I mean, I don't even know how the guy was flying the plane, because I couldn't even see. I was almost passing out half the time, and I had tears in my eyes, when I got off the plane I kissed the ground, it was like I made it.''

It didn't help Petersen that he's a bit claustrophobic and being strapped into the cockpit made him question his decision to participate even before takeoff.

''I don't know if it was out of control, I mean I couldn't lift my hands up and then I didn't know where I was and he was like, `Open your eyes and look up,' and I was upside down and I could see the Earth,'' Petersen recalled. ''And then all of the sudden the pressure was coming on. I mean, it was the most different feeling I've ever had.''

The flashback to 10 years ago, however painful, allowed Petersen to avoid what he loathes talking about.

The expectations on Washington as fall camp begins Friday haven't been this high for more than two decades, thanks to an experienced roster led by quarterback Jake Browning, running back Myles Gaskin and one of the best groups of defensive backs in the country.

Washington is the overwhelming favorite to with the Pac-12 North and the Pac-12 title, and is No. 6 in the preseason coaches' poll - its highest preseason ranking since 1997.

''You talk about all this experience, but I think teams change from good teams to great teams, or average teams to good teams, with how the old guys progress,'' Petersen said. ''We talk about that a lot. I'm just very adamant about that. So I'm anxious to get out there and see those guys that do have experience and have played with us, where their game goes in this next month. I really am anxious to see this.''

Petersen said the Huskies will be cautious early with players like left tackle Trey Adams (torn ACL) and wide receiver Chico McClatcher (broken ankle) who are returning from injuries suffered last season. The only player expected to be out for a majority of the upcoming season is tight end Hunter Bryant.

Rolling Over the Defense
After a dominant performance in a win over Georgia, Reggie Bush named Alabama's DeVonta Smith his 'Playmaker of the Week.'
5 hours ago

What You Need to Know: Big Ten Begins
Here comes the Big Ten, featuring a top 25 matchup and the return of Justin Fields in its debut weekend.
9 hours ago

Alabama Makes Statement Against Georgia
Nick Saban continued his absurd win streak against former assistants as Mac Jones had a star-making, breakout performance.
5 days ago
those were the latest stories
Want to see more?
View All Stories
Fox Sports™ and © 2020 Fox Media LLC and Fox Sports Interactive Media, LLC. All rights reserved. Use of this website (including any and all parts and components) constitutes your acceptance of these Terms of Use and Updated Privacy Policy. Advertising Choices. Do Not Sell my Personal Info