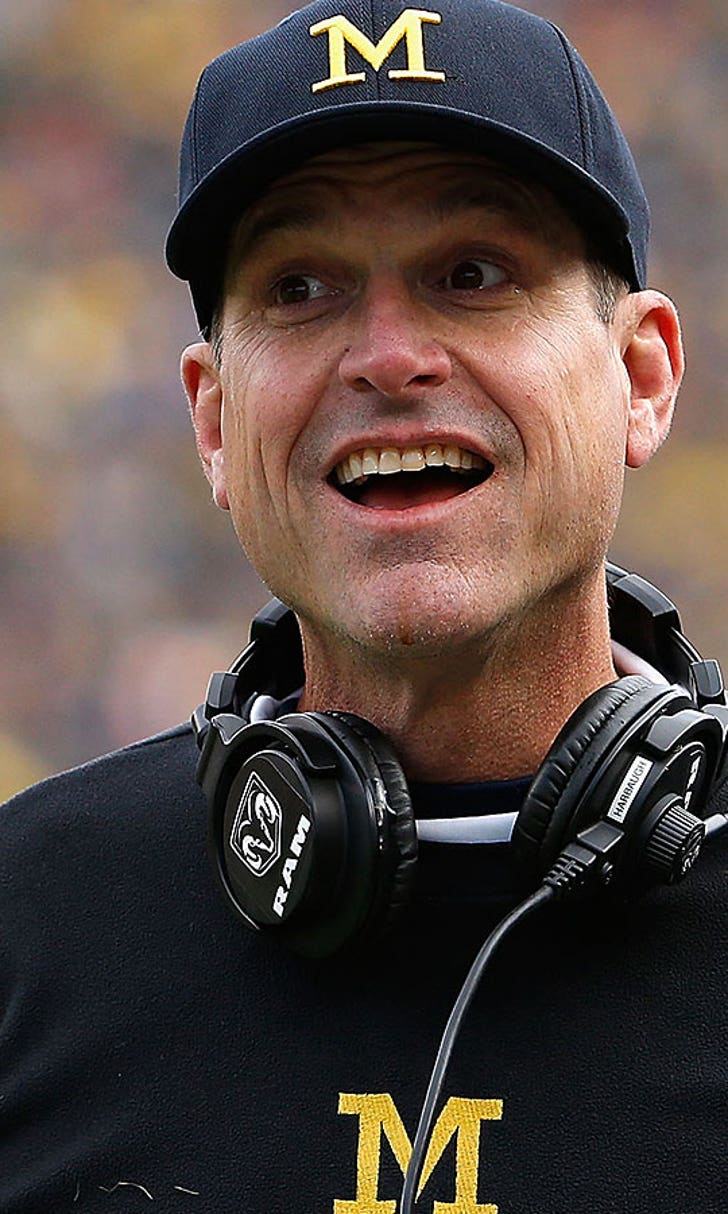 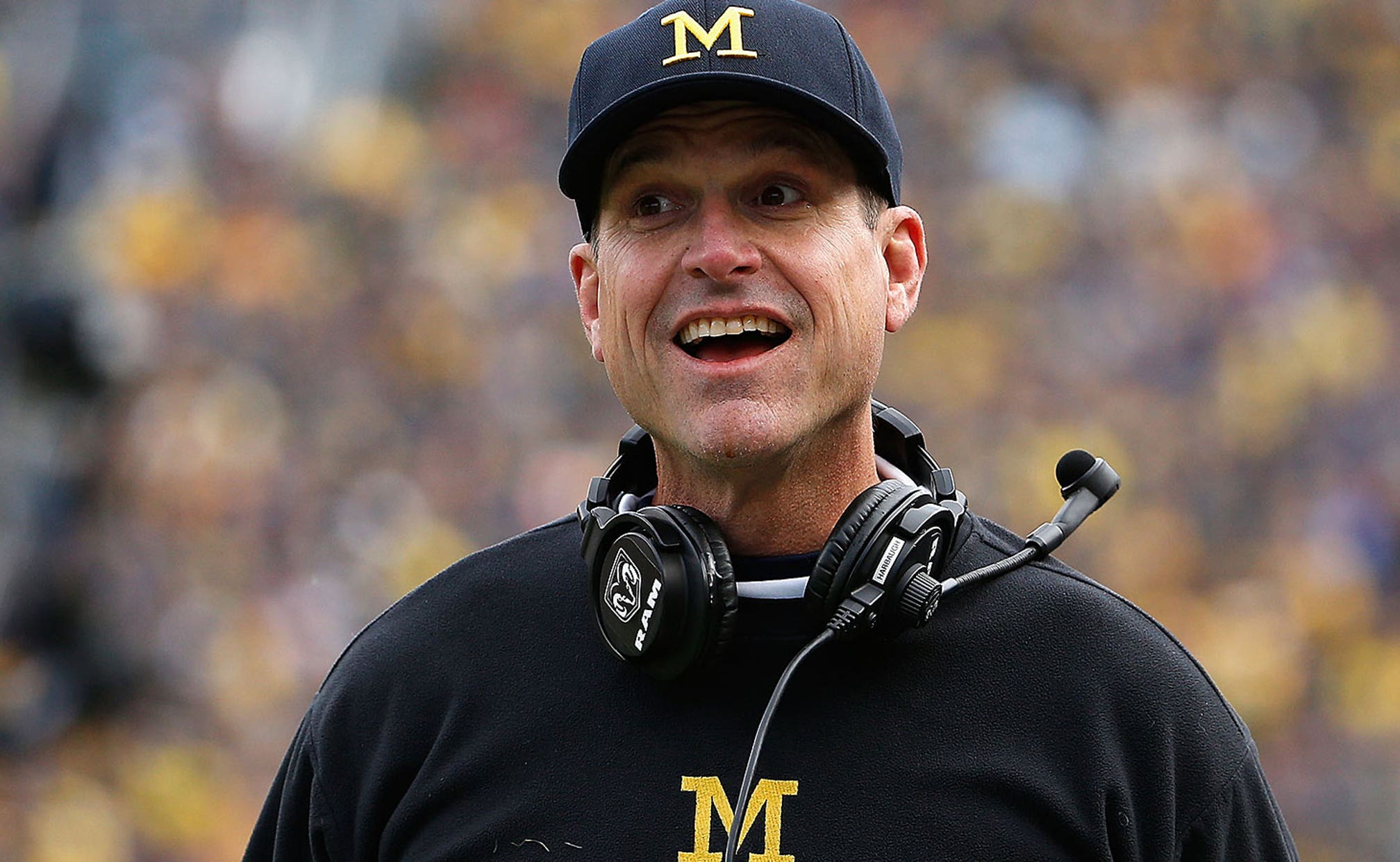 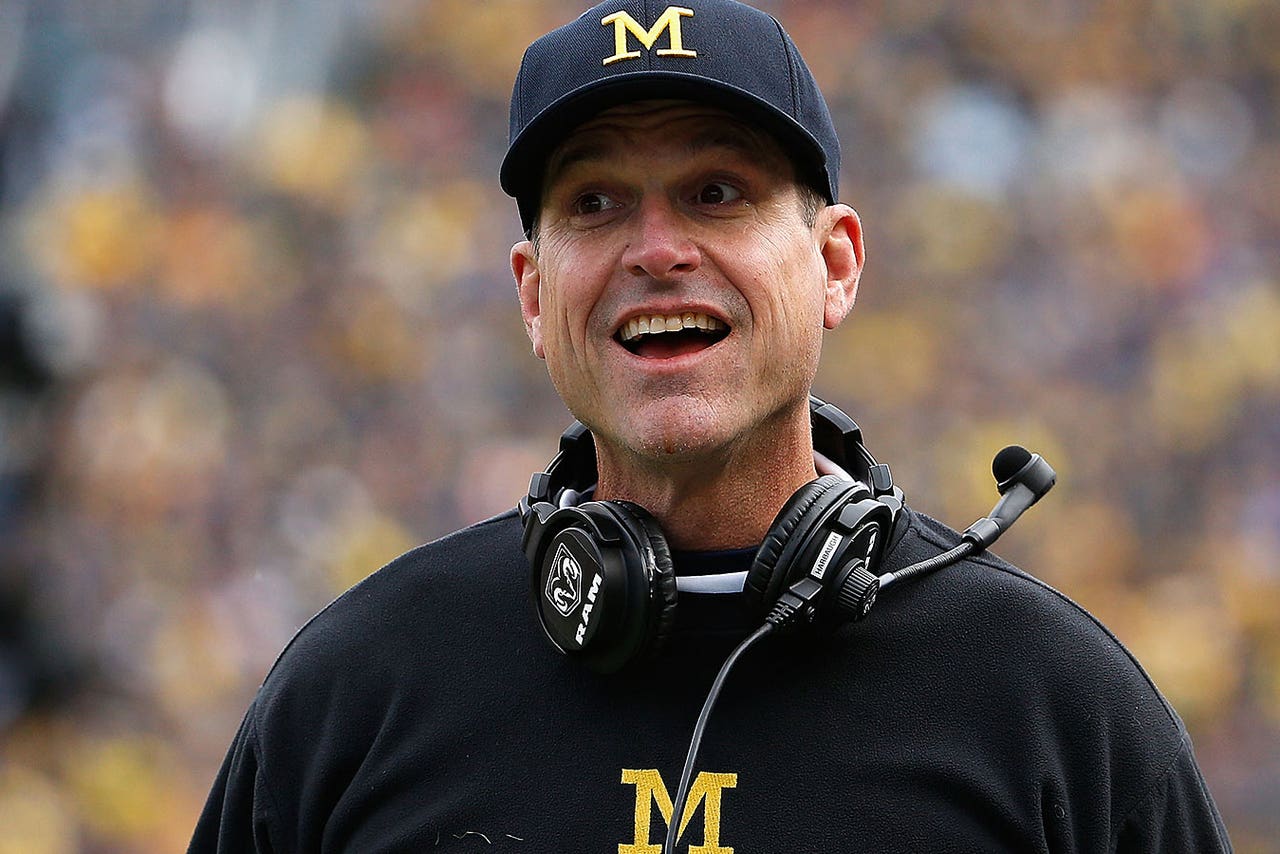 You can say a lot of different things about Jim Harbaugh.

All of those things are true.

Of course not everyone feels that way, as Harbaugh has turned himself into a one-man wrecking crew, going after everyone from Tennessee's Butch Jones to Georgia's Kirby Smart, and on Tuesday, Ole Miss coach Hugh Freeze.

1. He Calls Out Other Coaches:

In a world where every coach in America is afraid on stepping on each other's toes, afraid to say the wrong think, anger the wrong person, or be politically incorrect, Harbaugh is old-school. He doesn't care. He's like the Archie Bunker of college football, a man who can't help but say what's on his mind, 24-hours a day, 365 days a year, regardless of who it offends.

The best example yet came on Tuesday, when he went after Freeze. As you may have heard (or read above) Freeze had recently come out against satellite camps, saying that he didn't like the idea of spending time away from his family in the summer.

Well that message didn't fly with Harbaugh, who said the following:

And while Freeze came back with a pretty solid response himself it doesn't change one simple fact: Harbaugh doesn't care.

It's a trait we need more of in sports.

There's an old motto of "it ain't broke, don't fix it" and no place is it more prevalent than college football, where tradition permeates throughout the sport like the smell of old pads in a locker room.

It's everywhere... except in Harbaugh's world, where the Michigan coach seemingly answers every question the same way your four-year-old daughter does: By asking "why." In Harbaugh's world "That's just the way we've always done things" isn't a good enough answer.

The best example of that yet may have been with this year's Signing Day event.

For years, "Signing Day" was a boring old affair across the country, where a couple coaches sat by a fax machine, gave each other fake high-fives whenever the cameras were rolling, and then did a quick press conference at the end of the day. There, they gave all the same tired clichÃ©s about how "this is the best group of young men we've ever signed," before riding off into the sunset and starting in on their next recruiting class.

That's how it was... until Harbaugh arrived at Michigan, and flipped the event completely on its head this past February. There, he invited local dignitaries like Tom Brady, Derek Jeter to the event, as well as other, random celebrities like Lou Holtz, Ric Flair and others to take in the festivities.

3. He isn't afraid to push NCAA rules to the absolute limit:

So far, Harbaugh has been playing by the NCAA's rules....while pushing those same rules to their absolute breaking point.

For example, before Harbaugh arrived satellite camps were a boring old thing that rarely got discussed. Then Harbaugh showed up, turned his into a week-long, six-state tour that eventually led to the NCAA stepping in, and eliminating them altogether.

It could be the same thing with practicing during spring break. It was absolutely not thought of, until Harbaugh decided to take his team on the road, and straight into the backyard of the best high school program in high school football this year.

He has also hired prominent high school coaches as assistants, had his big, Signing Day blowout and recently agreed to speak at the commencement of one of the nation's top high school football powers.

4. He's comfortable in his own skin:

Seriously, when's the last time you saw Nick Saban or Urban Meyer rolling around a practice like this?

5. He's not embarrassed by his daytime TV preferences:

Harbaugh's a big fan of Judge Judy, dating all the way back to his days in San Francisco, when Harbaugh said:

Harbaugh believes in Judge Judy's virtues so much, he even nominated her for the Supreme Court.

It's funny that the whole "he-said, he-said" squabble with Freeze began over time with family, since Harbaugh's family dynamics always seem to be front and center in stories about him.

And it's not just his own family!

Who could forget when Harbaugh voluntarily slept over at the house of recruit Connor Murphy (whose brother Trent played for Harbaugh at Stanford) earlier this year. Harbaugh was even nice enough to stick around with the younger Murphy straight through the morning, and drop him off at school.

Look, we can spend all day sitting here talking about satellite camps and shirtless pics, cheap shots at the SEC and sleepovers with recruits. But none of it wouldn't matter if Harbaugh didn't win games.

And that's what's lost in all this Harbaugh hubbub: The guy is a darn good football coach.

He turned Stanford from arguably the worst team in all of major college football into one of the most consistently excellent programs in the sport. He took the 49ers from laughingstock to Super Bowl contender virtually overnight.

And for those who don't remember, it was just two years ago that Michigan was a bumbling, stumbling shell of a formerly great football program. Then Harbaugh came in, and now the Wolverines are the hottest program in all of college football.

When you think about it in those terms, it leaves me with just one question: What the heck is Harbaugh going to act like if Michigan ever starts winning championships?