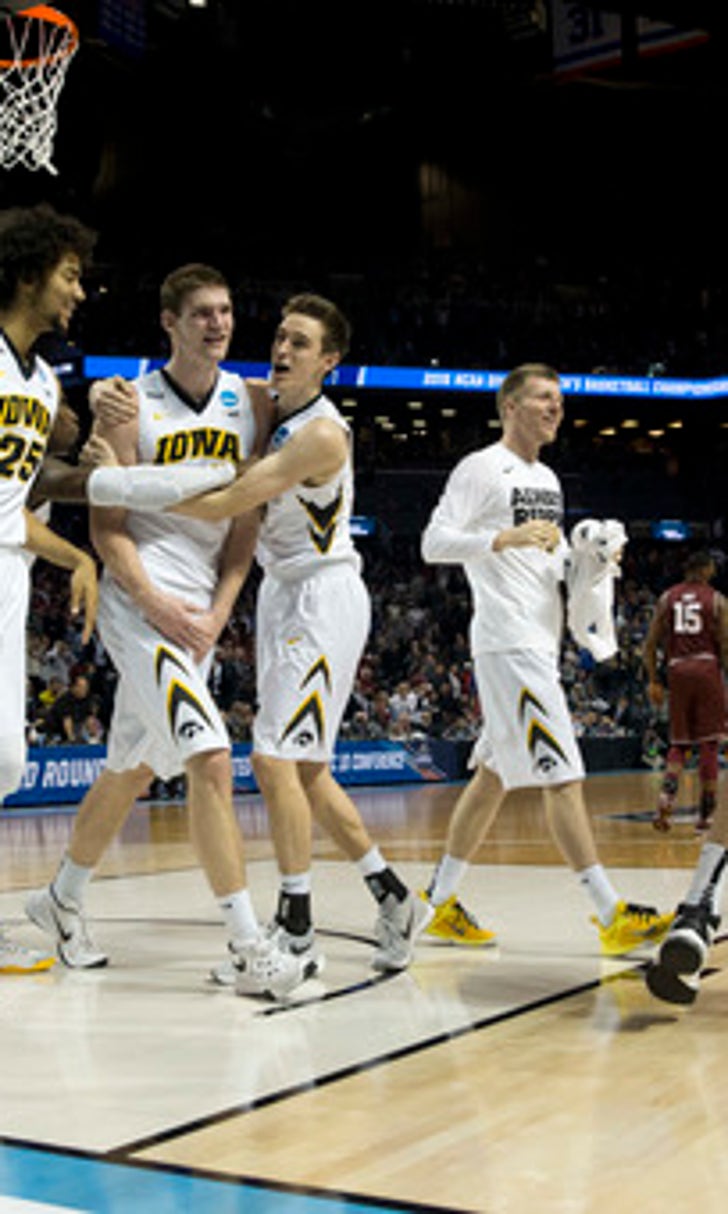 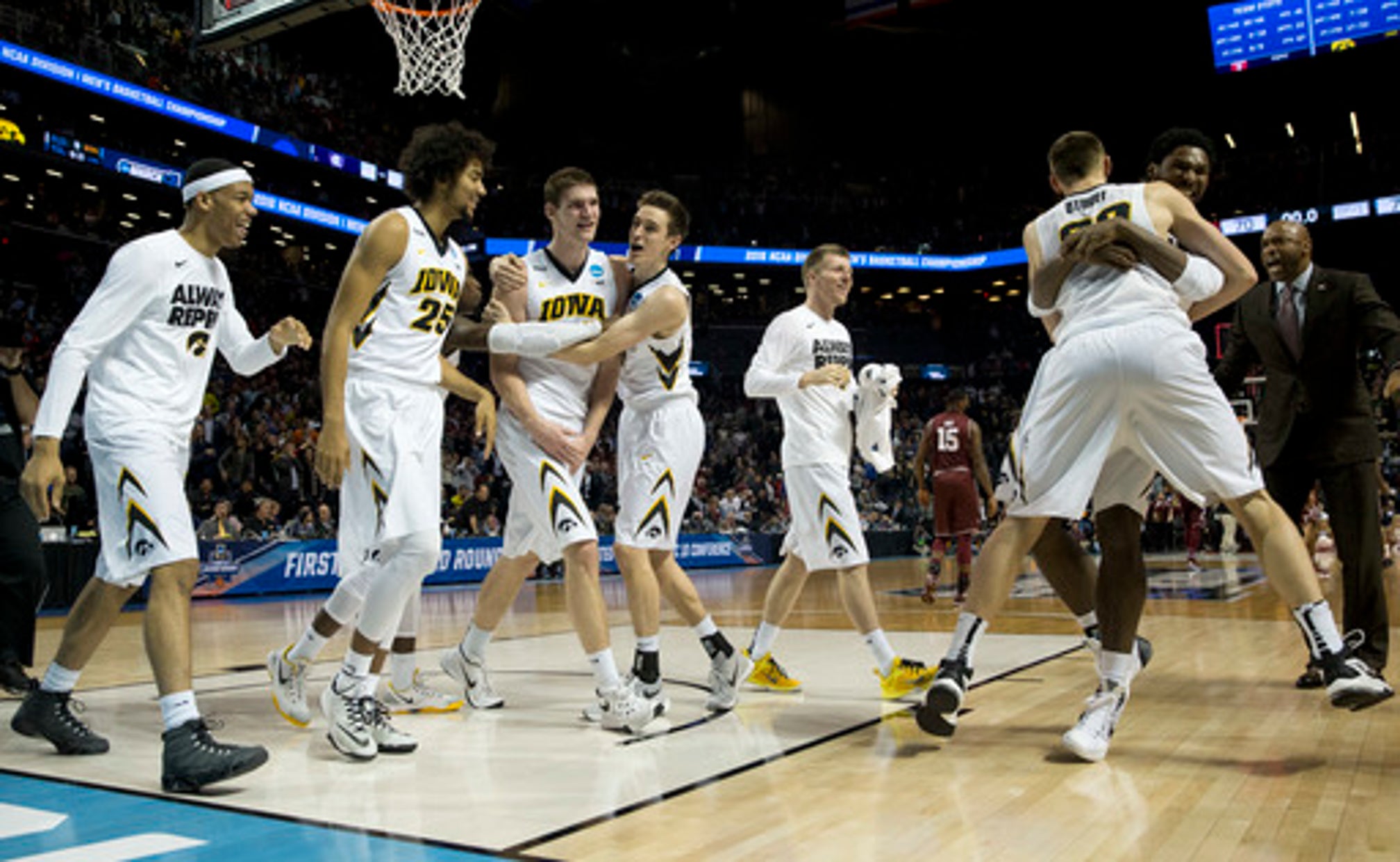 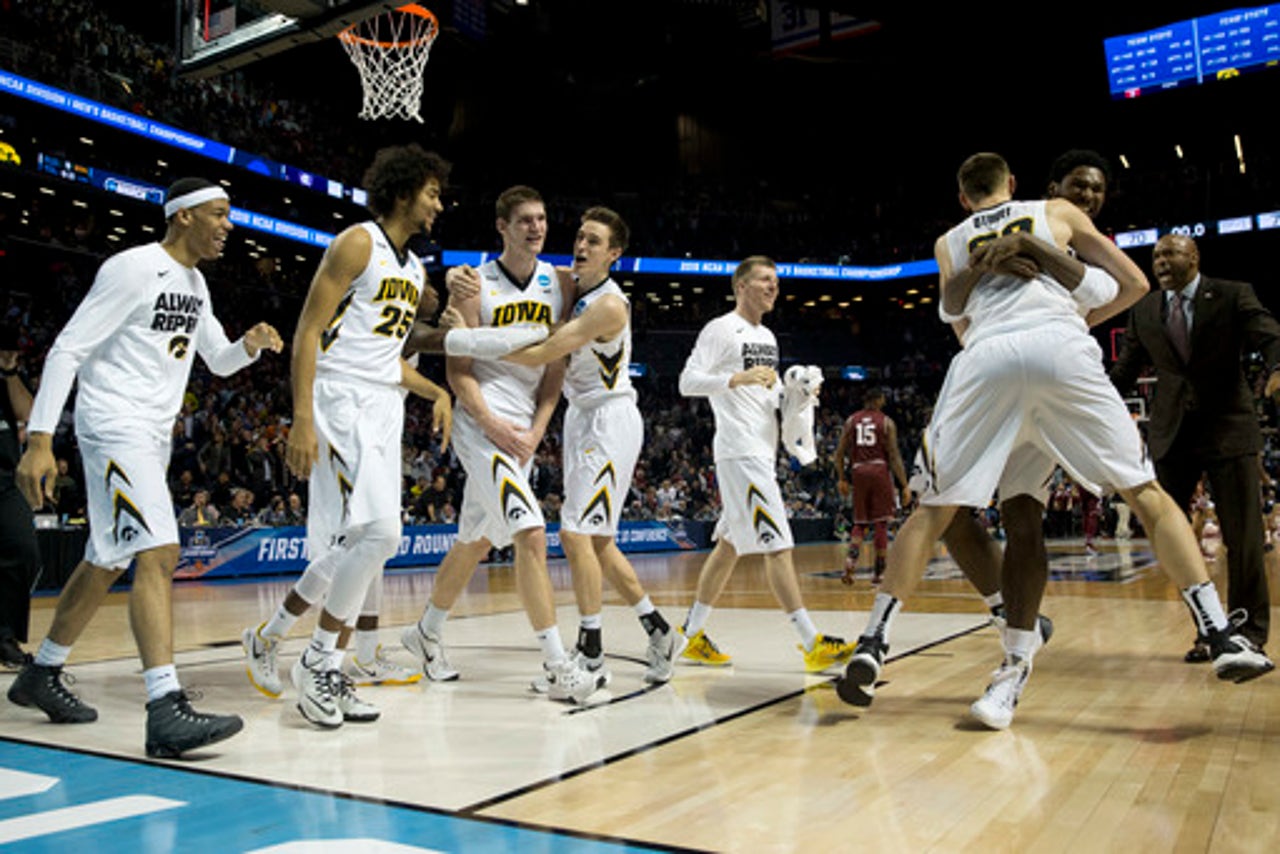 NEW YORK (AP) Adam Woodbury put back a missed shot at the overtime buzzer to give Iowa a 72-70 victory over Temple on Friday in the first round of the South Regional at Barclays Center.

With the game tied at 70, Mike Gesell worked his way to the baseline and shot about a 10-foot jumper that missed the rim and went right to Woodbury, who put it in as the red lights around the backboard lit up.

Jarrod Uthoff led Iowa with 23 points, while Peter Jok had 16 and Woodbury finished with 10.

The Hawkeyes came into the game having lost six of their last eight games and they had lost five of their last six NCAA Tournament games.

Iowa started the game by making 6 of 9 3-point attempts and opened a 28-18 lead. While Temple stayed patient, running the shot clock down so often the Owls band had plenty of practice counting backward, the Hawkeyes missed their next seven shots from beyond the arc. Temple closed the half on a 17-6 run to cut Iowa's lead to 38-37.

Iowa led 61-53 with 5 minutes left in regulation but both teams went into an offensive funk, combining for nine points, the last three DeCosey's clutch free throws that sent the game to overtime.

Anthony Clemmons made one of two free throws with 1:08 left in overtime to give Iowa a 70-68 lead. Josh Brown's drive tied it with 50 seconds to play. Iowa was able to rebound two misses before Dingle went to the free throw line.

Woodbury's game-winner was his fourth offensive rebound of the game.

Temple, which played at a decided height disadvantage, outrebounded the Hawkeyes 49-38.

The Owls, who lead the nation in turnovers at 9.2 per game, finished with 12 while Iowa had three, the first coming with 5 minutes left in regulation.

There was plenty of brotherly love to go around in Barclays Center. Both Villanova and Temple are members of Philadelphia's Big 5 and three of the coaches are Philly guys: Jay Wright of Villanova, Fran Dunphy of Temple and Fran McCaffrey of Iowa.

Temple: Dunphy entered the game with a 3-15 NCAA Tournament record at Penn and Temple. ... The Owls' last NCAA appearance as in 2013 when they beat North Carolina State and lost to top-seeded Indiana in the second round.

Iowa: The Hawkeyes won the only two meetings between the schools. The first was in the Final Four semifinals in 1956. ... This was the third straight year Iowa was in the NCAA Tournament. The last time the Hawkeyes did that was 1991-93. ... The Hawkeyes were also a No. 7 seed last season. They beat Davidson and were eliminated by Gonzaga in the second round.

Iowa: Villanova on Sunday in the second round.