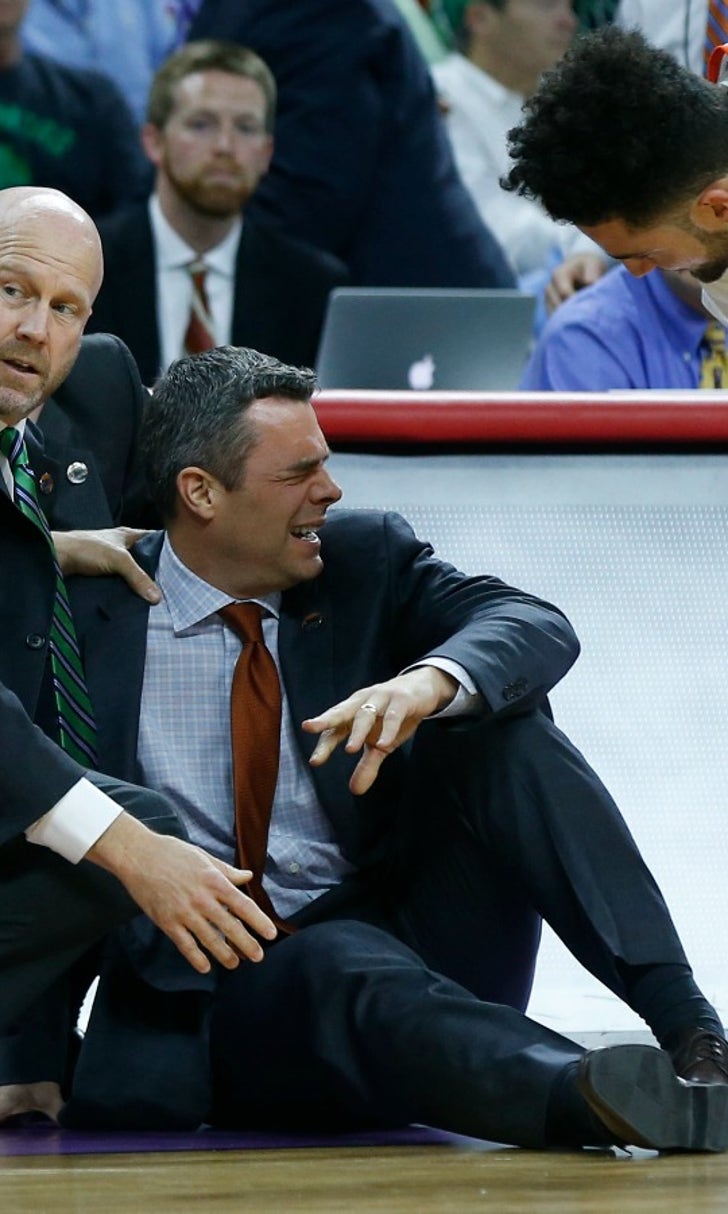 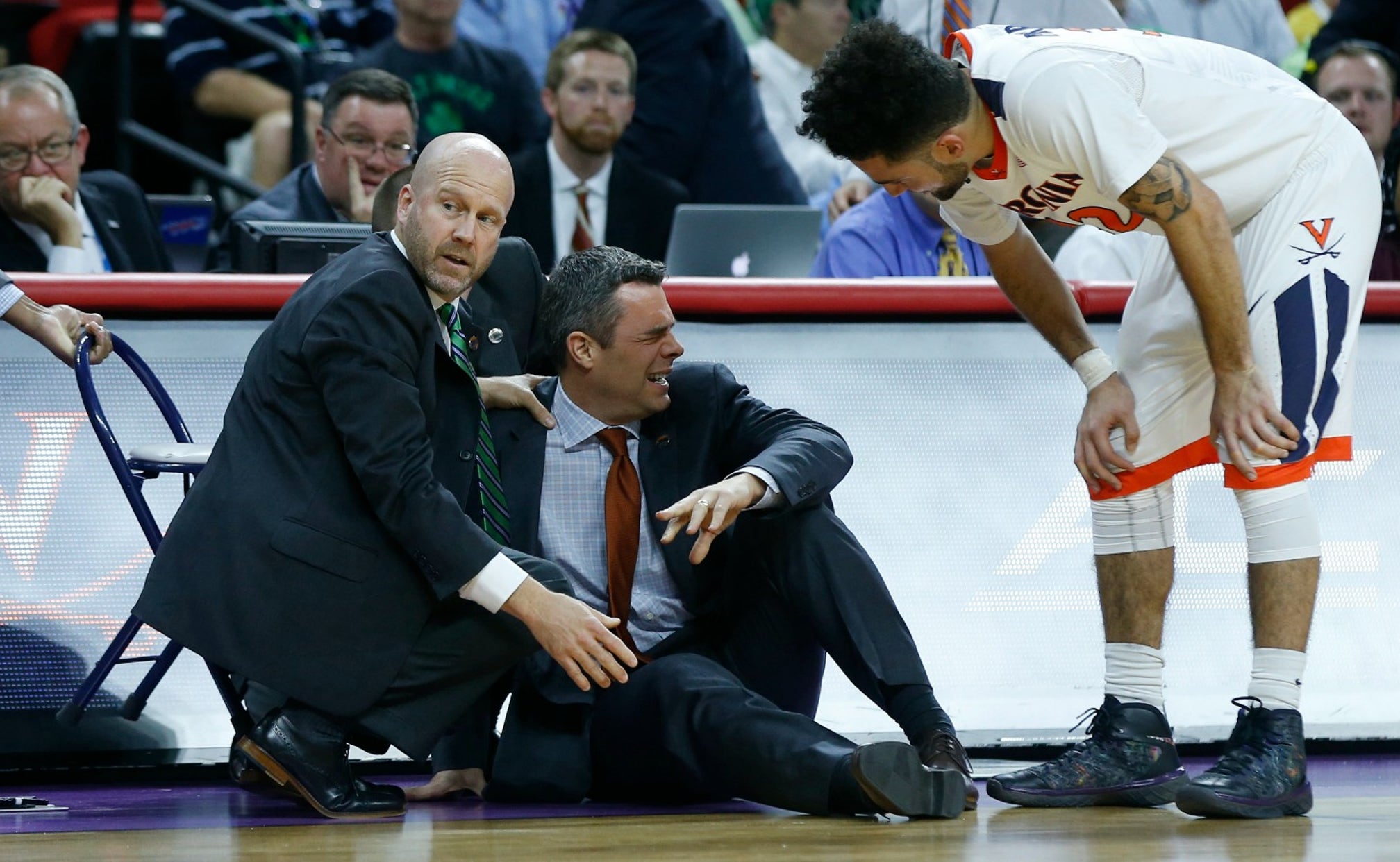 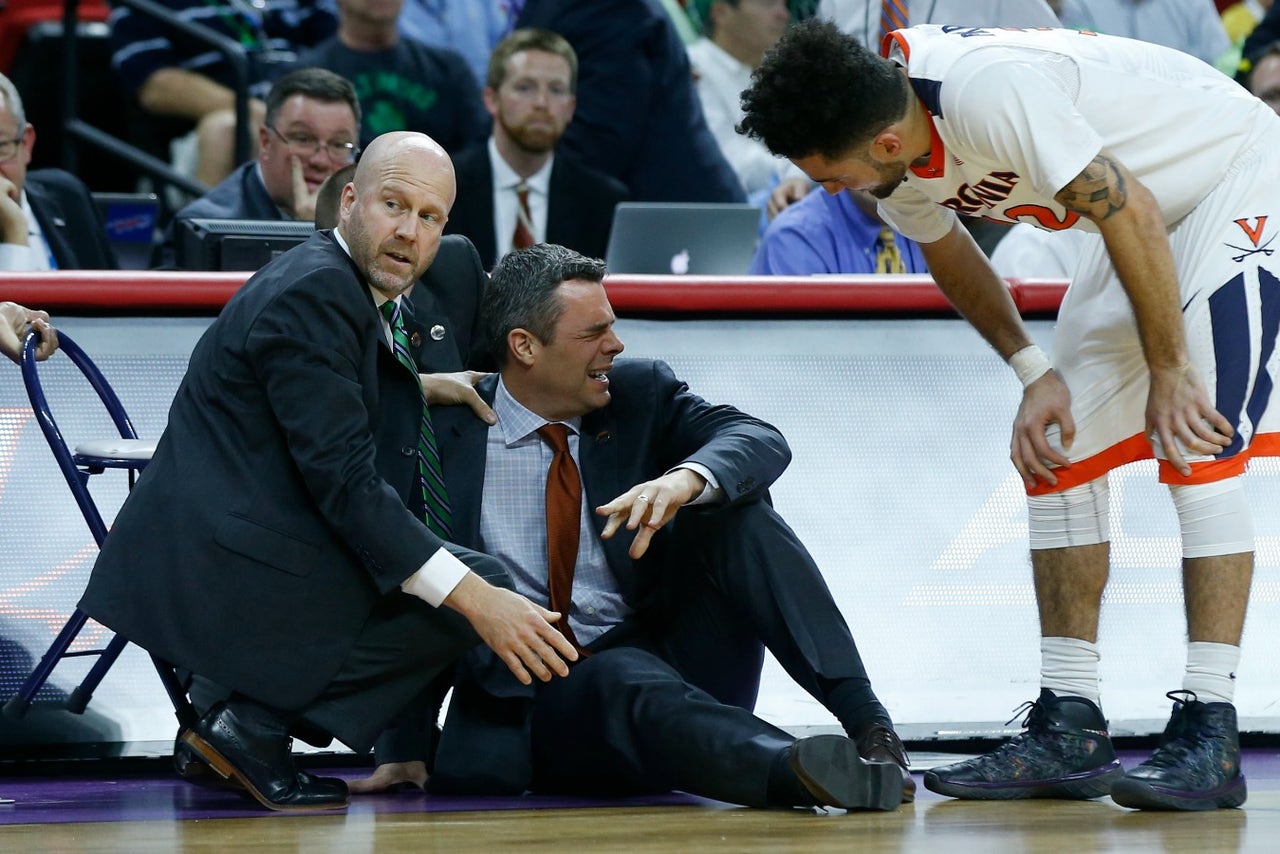 RALEIGH, N.C. — Virginia sure got a scare in its NCAA Tournament opener.

Not from Hampton — but from coach Tony Bennett.

The top-seeded Cavaliers beat 16th-seeded Hampton 81-45 on Thursday in the first round of the Midwest Regional after Bennett collapsed in the final seconds of the first half.

I wanted to let all my fans know that Im ok. Glad to hear UVA coach Tony Bennett is fine after his fall. Congrats @UVAMensHoops on the win!

Saying he felt sick earlier in the week, Bennett blamed his collapse on dehydration.

"I've had more Powerade than I've ever had in my life right now," Bennett quipped.

They shot 55 percent, hit 12 3-pointers — their most since November — and put this one well out of reach with a 20-3 run late in the first half. That had them well on their way to advancing to face ninth-seeded Butler (22-10) on Saturday. 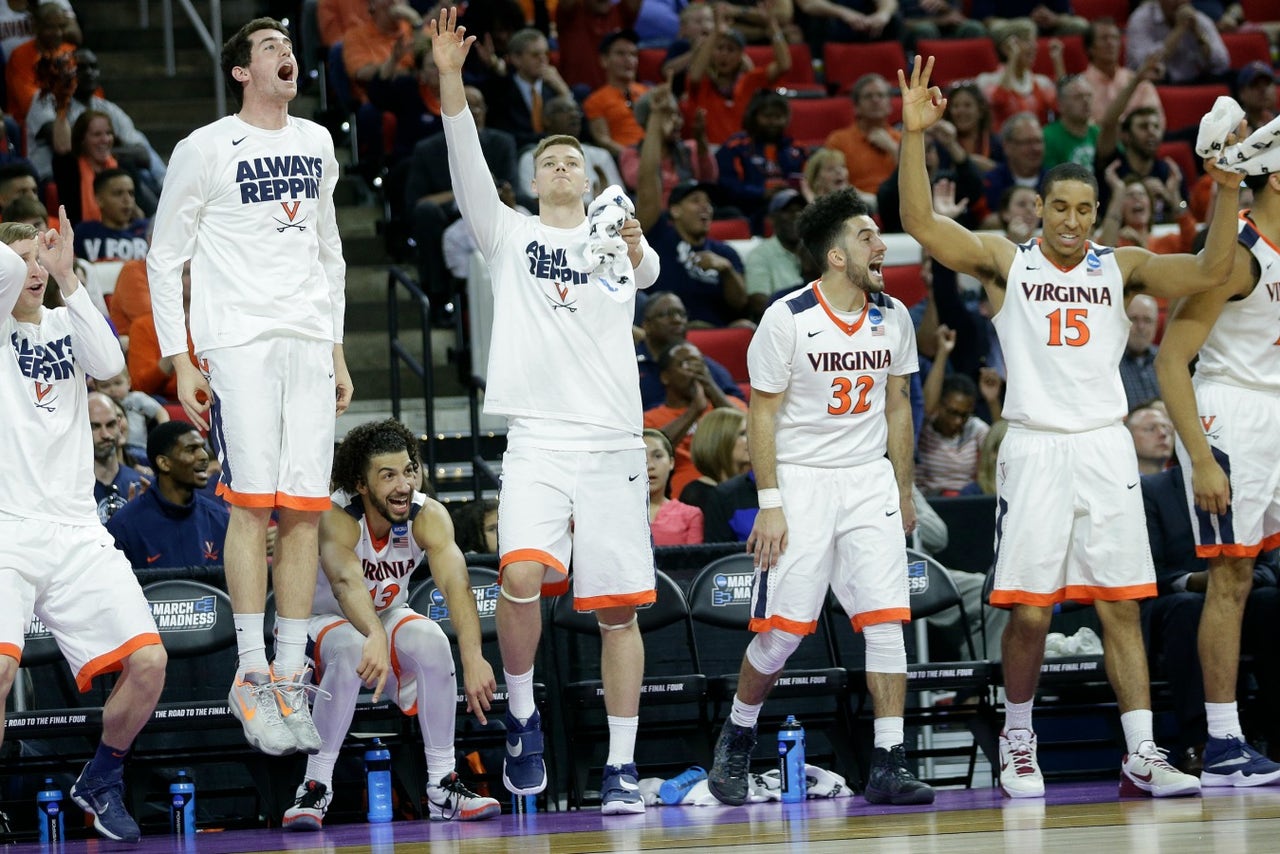 The Virginia bench cheers during the second half.

Quinton Chievous scored 17 points and Reginald Johnson Jr. had 10 for 16th-seeded Hampton (20-11). Making their second straight NCAA Tournament appearance, the Pirates were just 4 of 20 from 3-point range and shot 32 percent. They never got closer than 19 in the second half.

"We talked about it. We believed it. We tried to live it," Hampton coach Edward Joyner Jr. said of the challenge of taking on a No. 1 seed as a No. 16 seed.

The biggest concern for Virginia occurred when Bennett fell to the floor with 34.1 seconds left. He sat on the bench talking to his assistants for a few moments, appearing to be in noticeable pain. Team trainers helped the 46-year-old to the locker room with 5.3 seconds left in the half and both teams still on the court.

Virginia fans gave him a loud ovation when he returned for the second half. Bennett spent the rest of the game sitting either on the bench or on a stool near the scorer's table instead of crouching on the sideline.

Gill was spotted with his head bowed in prayer while Bennett was being checked out by team medical staff, and a photo of the Virginia forward made the rounds on social media.

"I was praying just to make sure he was OK," Gill said with a straight face. "It worked. I healed him."

Everyone had a good laugh afterward at Bennett's scare, which came as the Cavaliers were putting the finishing touches on the game-deciding run.

After Hampton made it a two-point game with just under six minutes left in the half, Brogdon took over. He sandwiched two 3-pointers around a bullet pass that set up a dunk by Isaiah Wilkins.

Perrantes then hit consecutive 3s before Evan Nolte also hit from long range, and Gill's three-point play at the time Bennett collapsed made it 40-21 at halftime.

"It just started with ... getting into the paint, having our bigs be aggressive down low and just finishing down low," Perrantes said. "It opened up for us around the 3-point line."

"We wanted to challenge to try to make them knock down shots," the Hampton coach said. "And they did."

"I would not be shocked if I was at the Final Four in Houston and they were playing" — Joyner, on Virginia.

Gill, a native of High Point, has reached double figures in all three NCAA Tournament games he has played in Raleigh, averaging 16.3 points in them. When Virginia was a No. 1 seed here two years ago, he scored 17 against Coastal Carolina and then 13 against Memphis.

"Any time my family can be here and help me kind of motivate me to play the best that I can play, that really gets me going," Gill said.

Hampton: The Pirates fell to 1-15 against Atlantic Coast Conference schools. They haven't beaten one since knocking off North Carolina in 2001-02.

Virginia: It was Gill's highest-scoring game since he had 21 on Jan. 2 in a win over Notre Dame. ... Virginia hadn't hit more 3-pointers since it made 13 against Long Beach State on Nov. 20.

Virginia: Plays Butler on Saturday in the second round.

Virginia Cavaliers
share story
those were the latest stories
Want to see more?
View All Stories
Fox Sports™ and © 2021 Fox Media LLC and Fox Sports Interactive Media, LLC. All rights reserved. Use of this website (including any and all parts and components) constitutes your acceptance of these Terms of Use and Updated Privacy Policy. Advertising Choices. Do Not Sell my Personal Info