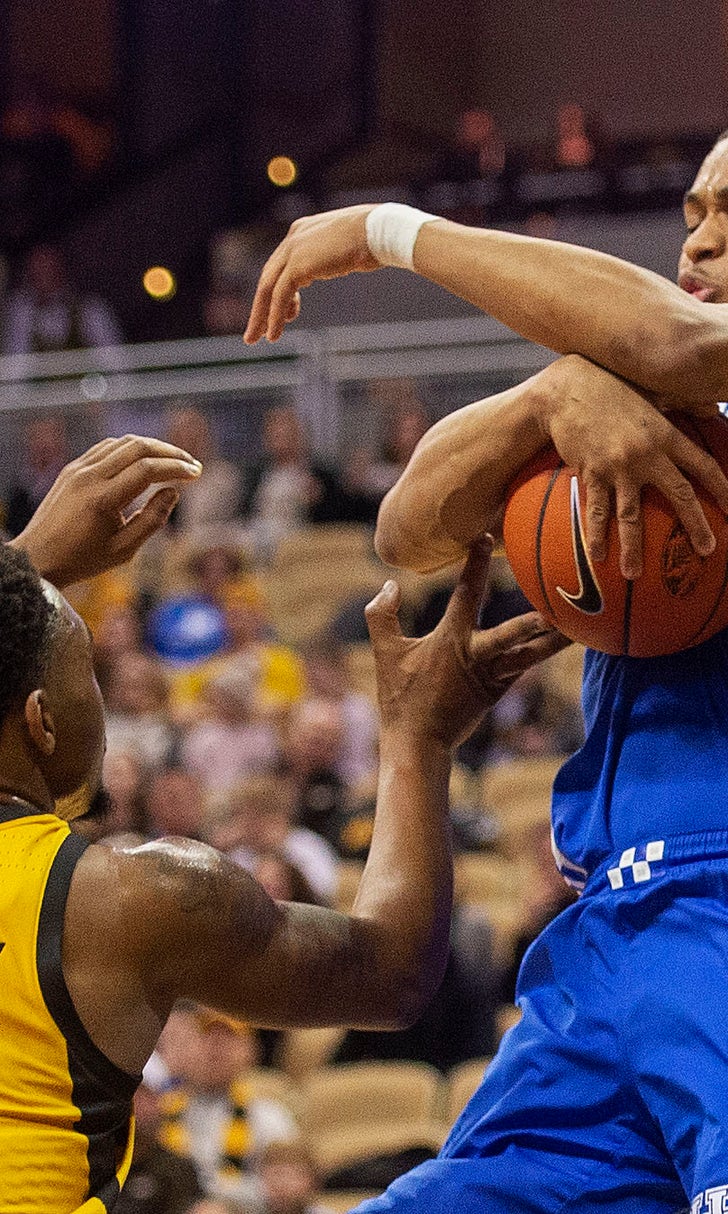 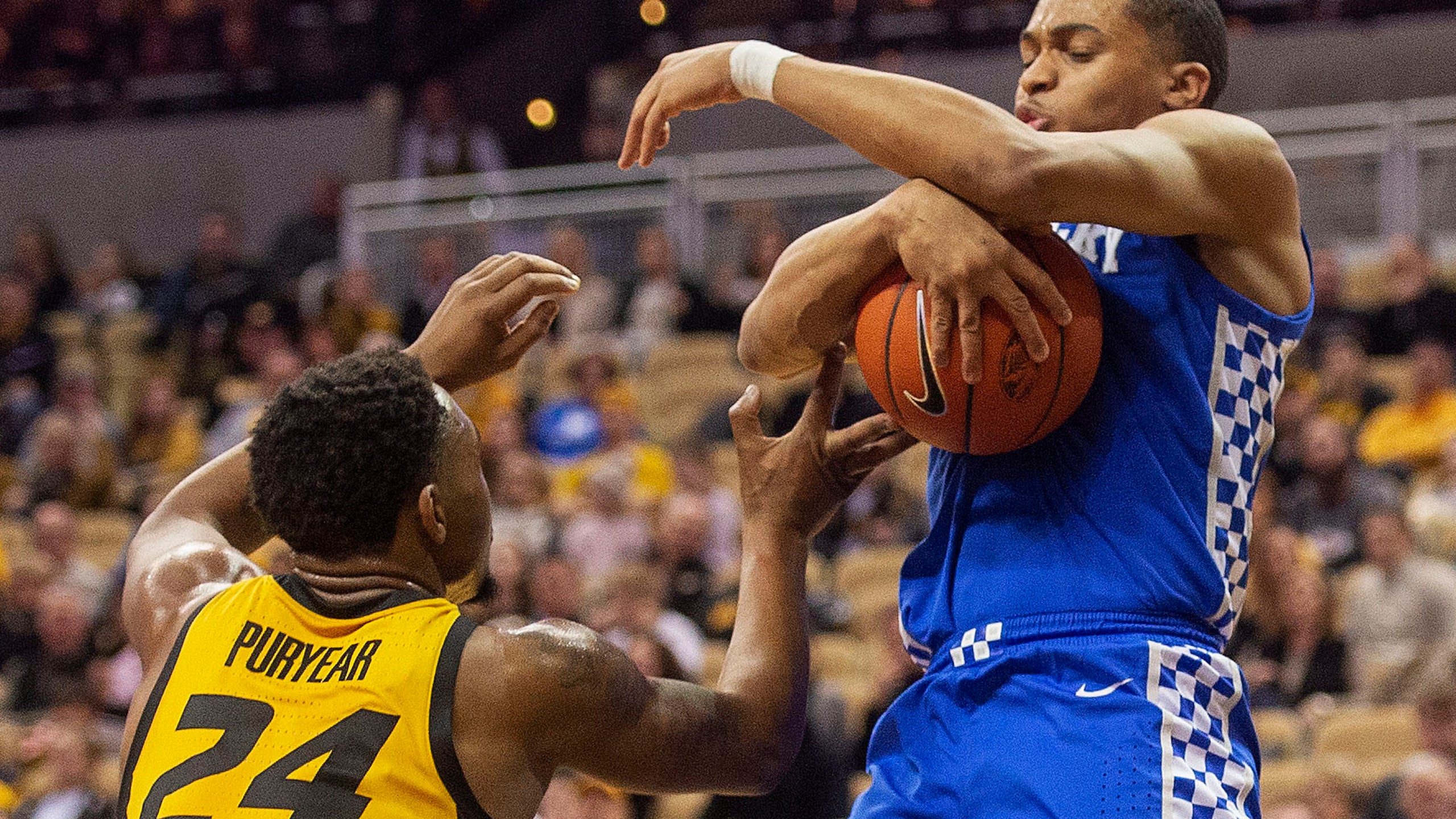 No. 4 Kentucky gets past Missouri

Ashton Hagans added 12 points for the Wildcats (22-4, 11-2 Southeastern Conference), who looked a little sluggish three days after beating then top-ranked Tennessee. But Kentucky was good enough defensively to hold the Tigers to 37 percent shooting from the field.

KNOXVILLE, Tenn. (AP) — Grant Williams had 14 points and 11 rebounds, and Tennessee beat Vanderbilt in the Volunteers' first game since losing their No. 1 ranking.

Tennessee (24-2, 12-1 Southeastern Conference) bounced back from its first loss since Thanksgiving week, an 86-69 defeat at No. 4 Kentucky on Saturday to snap a school-record 19-game winning streak.

Vanderbilt (9-17, 0-13) dropped its 14th straight, matching the longest skid in school history. Vanderbilt had a 14-game losing streak that began in the 1934-35 season and carried over to the next season.

Ryan Cline had 11 points, and Haarms finished with six for the Boilermakers (19-7, 12-3 Big Ten), who have won three straight at Assembly Hall for the first time in school history.

It didn't come easily. Indiana's Romeo Langford scored 14 points despite not taking a shot in the second half, and Juwan Morgan's 3-pointer grazed the rim at the buzzer. Morgan had nine points and 11 rebounds as Indiana (13-13, 4-11) lost its fourth straight overall and fifth in a row in the series.

CLEMSON, S.C. (AP) — Mfiondu Kabengele had 19 points and 11 rebounds, and Florida State set a program record with its eighth consecutive Atlantic Coast Conference victory in a win over Clemson.

Makia Mason scored 14 points on 18 shots in his return from a toe injury for the Bears (17-9, 8-5 Big 12). They outrebounded Iowa State 44-28 and grabbed 18 offensive rebounds over the smaller Cyclones, who've dropped back-to-back games at Hilton Coliseum.

After trailing by 10 points midway through the first half, Iowa State went ahead 52-50 on Marial Shayok's three-point play with 11:45 left. Baylor swapped the lead with the Cyclones (19-7, 8-5) seven times in the next eight minutes, but Butler followed a layup with a 3 to put the Bears ahead 69-65 with two minutes left.

Iowa State's Cameron Lard then fumbled an entry pass from Shayok, and Mason hit two free throws to make it 71-65 with 35.3 seconds to go.

IOWA CITY, Iowa (AP) — Bruno Fernando scored 11 points, including the last two on a putback with 7.8 seconds left, to lift Maryland to a win over Iowa.

Maryland (20-7, 11-5 Big Ten) gave up an 11-point lead over the final four minutes, but held on against an Iowa team that had won its last two games via buzzer-beater and had two looks at the basket in the final seven seconds. The Terrapins got 17 points from Anthony Cowan, who shot 5 of 10 from 3-point range and had eight rebounds. Eric Ayala added 11 points and Fernando had 11 rebounds.

AMHERST, N.Y. (AP) — Jayvon Graves scored a career-high 26 points and Buffalo used a record-setting shooting performance to cruise to a win over Ohio for its 23rd straight home win.

CJ Massinburg (23 points), Jeenathan Williams (13 points, eight rebounds) Montell McRae (11 points, seven rebounds) and Graves led the way for the Bulls, who set school records for 3-pointers made (19) and point scored against a Division I opponent.

The Bulls (23-3, 11-2 Mid-American Conference) have won four straight and tied a team record for regular season victories set last season. Their 23-game home win streak is tied with Tennessee for the second-longest in the country.