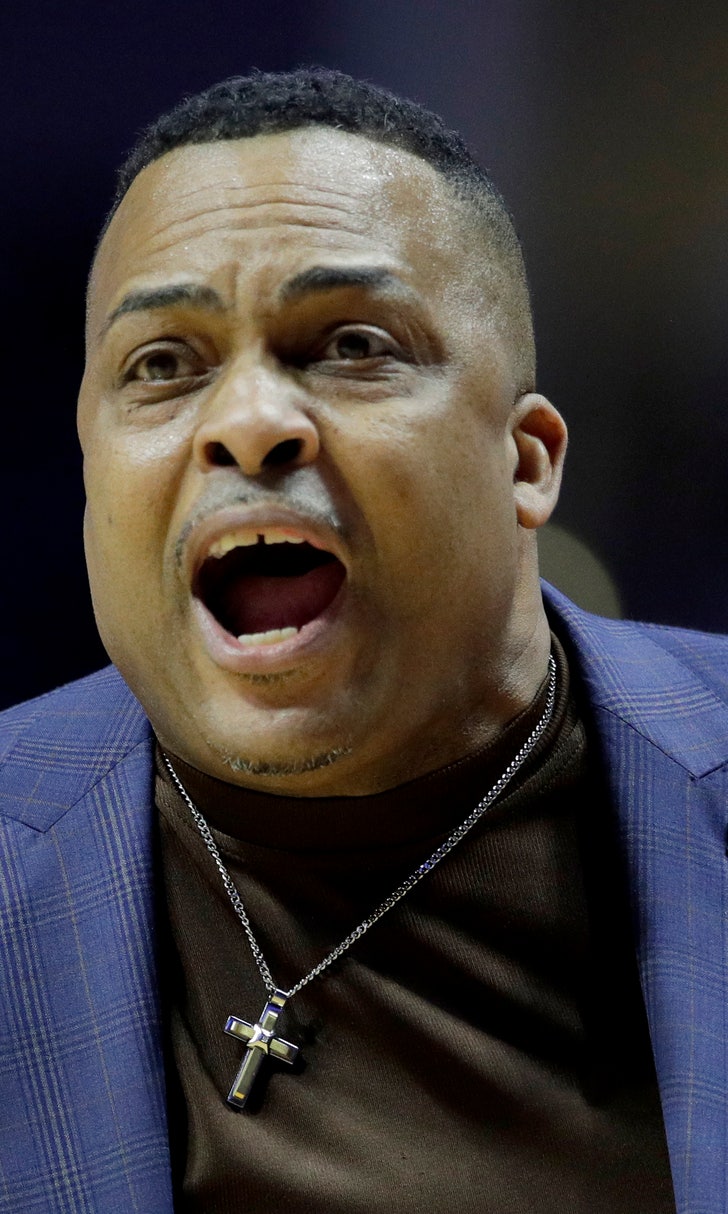 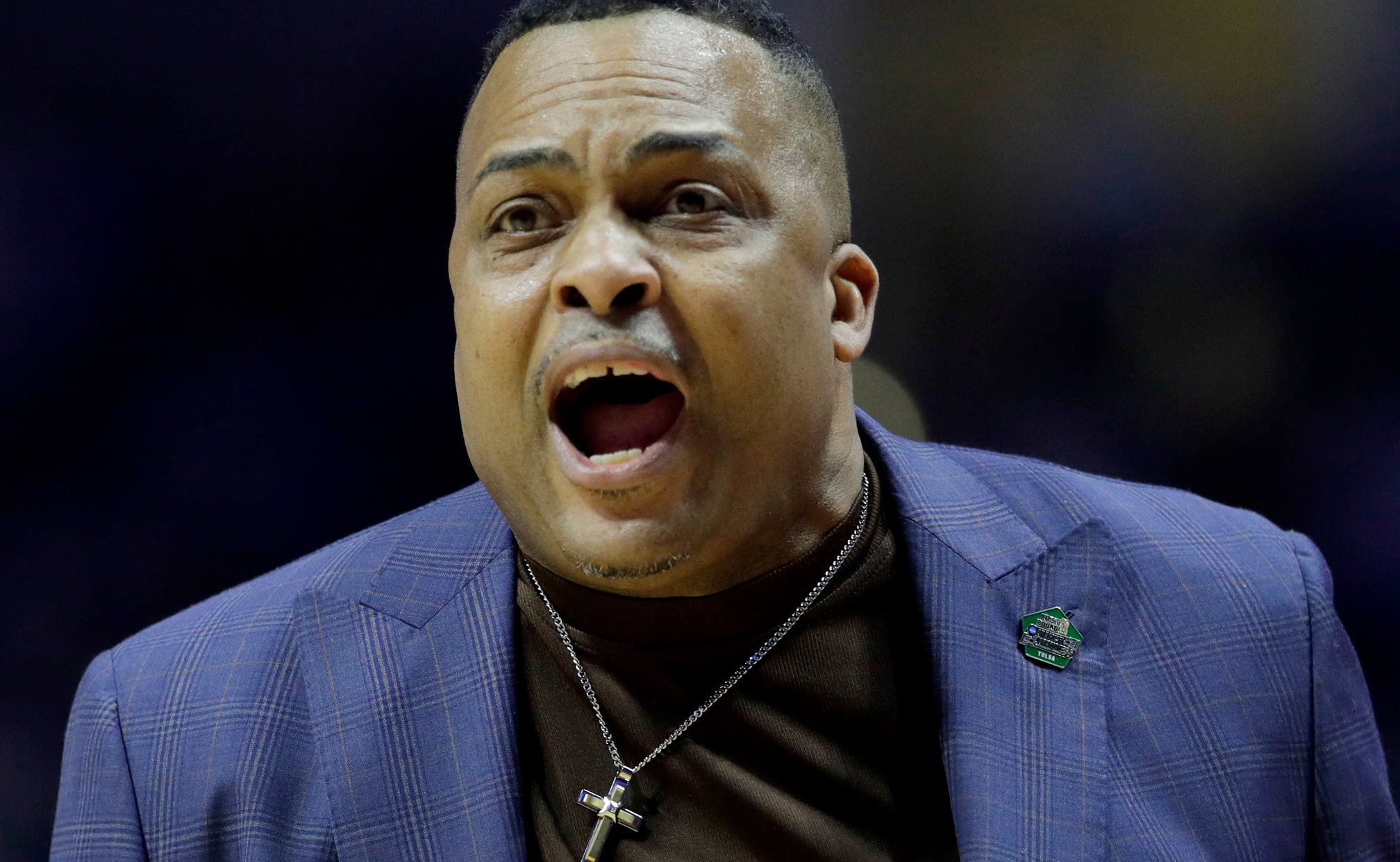 Ga State coach Hunter leaving to take over at Tulane

ATLANTA (AP) — Less than 48 hours after Georgia State was eliminated from the NCAA Tournament, Ron Hunter decided Sunday to leave the Panthers to become Tulane's coach.

Best known for tumbling to the court after his son hit a game-winning shot in the 2015 tournament, Hunter told The Associated Press that he had received other offers in the past but thought this was perhaps his final chance to make a move.

Georgia State's season ended with an 84-55 loss to Houston on Friday. Hunter met the following day with Tulane officials for four hours and quickly realized it was time to move on after coaching the Panthers for eight seasons.

"I wanted to sleep on it," he said in a telephone interview. "When I woke up this morning, I knew."

Hunter plans to head to New Orleans on Monday, with a formal introduction to come the next day. His decision was first reported by the Atlanta Journal-Constitution.

The 54-year-old Hunter takes over a Tulane men's basketball program that fired Mike Dunleavy after the Green Wave failed to win a game in the American Athletic Conference. He has no doubts that he'll be able to turn things around, though he couldn't resist a joke about the low expectations.

"I'll be a rock star if we win four games next year," Hunter said with a laugh.

The biggest factor in leaving Georgia State, a sprawling school in downtown Atlanta that has struggled to carve a niche in the city's crowded sports scene, was its membership in one of those obscure leagues that never gets more than one NCAA Tournament bid.

Hunter's best team in Atlanta may have been his 2013-14 squad, which went 17-1 in the Sun Belt Conference but lost the final of the league tournament in overtime, forcing the Panthers to settle for a spot in the NIT.

The American, on the other hand, landed four teams in this year's NCAA field: Houston, Cincinnati, UCF and Temple.

"I'm tired of one-bid leagues," said Hunter, who faced the same predicament in his previous head coaching job at IUPUI, a member of the Mid-Continent Conference and Summit League during his tenure. "That's very frustrating to me. You can win your league, but you have one bad weekend (at the conference tournament) and you've got no chance. It doesn't matter what you do all year. That was getting old for me. I wanted to get to a multi-bid league."

Tulane presents similar challenges to the ones he faced at Georgia State and IUPUI, a school in Indianapolis where he coached from 1994-2011.

"They were both programs in major cities that had struggled," Hunter said. "That's something I'm very comfortable with. I like taking programs that most people don't believe can win. I know when I took the Georgia State job, people thought I was crazy."

He faces quite a rebuilding job at Tulane.

The Green Wave hasn't been to the NCAA Tournament since 1995, hasn't had a winning season since 2012-13, and went 24-69 the last three years under Dunleavy, including an 8-46 mark in conference play.

"It's not like I'm nervous about it," Hunter insisted. "I feel better about Tulane than when I first started at Georgia State."

He posted a record of 171-95 at Georgia State, leading the Panthers to three NCAA appearances and six 20-win seasons.

"Coach Hunter is a winner in every respect," Tulane athletic Director Troy Dannen said Sunday evening. "We are thrilled to bring his leadership to our campus and the city of New Orleans."

Hunter's tenure at Georgia State will always be remembered for a game four years ago, when he coached in the tournament with a cast on his left leg after rupturing an Achilles tendon while celebrating the team's victory in the Sun Belt Tournament.

The 14th-seeded Panthers rallied from a 12-point deficit and stunned third-seeded Baylor when R.J. Hunter hit a long 3-pointer with 2.7 seconds remaining for a 57-56 upset. Confined to a rolling stool on the sideline, the elder Hunter sprawled on the court in jubilation when the shot went through — a March Madness moment that is still shown on the tournament's highlight reel.

Now, he's ready to create some new memories in the Big Easy.

"Actually, I'm shocked they haven't won," Hunter said. "I know we can win there."