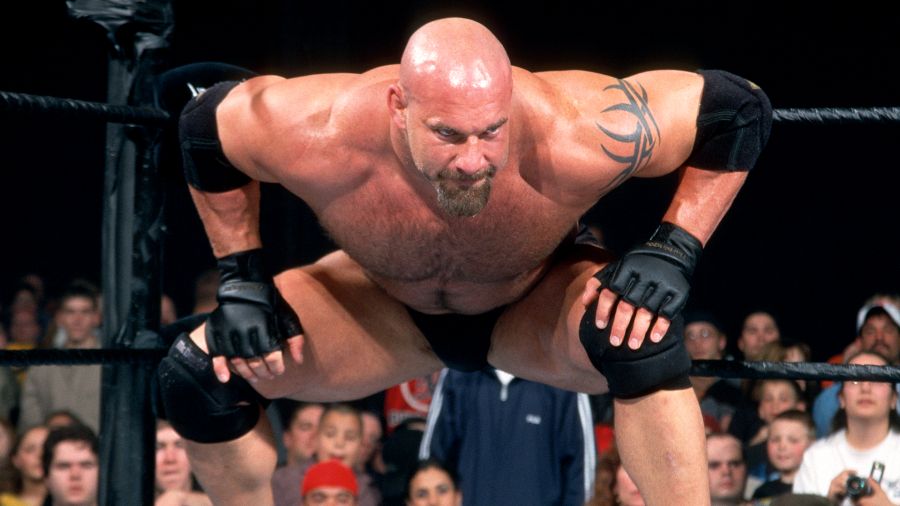 What do you get when you mix Brock Lesnar’s F-5 with Goldberg;s Jackhammer? Too many nasty memories of WrestleMania XX.

There has been plenty of talk recently about the possibility of a rematch between Brock Lesnar and Goldberg. WWE has been promoting Goldberg heavily in the newly-released WWE 2K17 and has been showcasing his interviews regularly.

Lesnar, meanwhile, is one of WWE’s biggest cash cows and a considerable part-time draw. Given these elements (as well as Paul Heyman’s promo on the October 10th episode of RAW) a Goldberg-Lesnar rematch appears to be planned for the future.

It’s easy to understand why WWE sees dollar signs in a possible match between Lesnar and Goldberg. To many people, Goldberg was the truest definition of a juggernaut. He never ‘paid his dues’ in wrestling or lost embarrassing matches. He arrived, destroyed people with his arsenal of power moves, and left.

Despite a mediocre WWE run, much of his mystique has remained intact. WWE wants to take that mystique and feed it to Brock Lesnar, their own juggernaut with a part-time schedule. The idea would be for this match to drum up more interest in WWE’s product, especially now, when things aren’t going so well.

At the same time, WWE sees this as a big match for Lesnar as well. His most recent match against Dean Ambrose left a lot to be desired. As such, WWE wants to make the most out of the limited dates that Lesnar has in his contract. A supposed ‘dream match’ against a legend of the past seems to be what they think to be an ideal use for Brock Lesnar.

Unfortunately, if this rematch happens, it will be a bad idea in hindsight. While there are many reasons why this match-up shouldn’t happen, the five listed in this article are the most important. Let’s deal with the elephant in the room right away: Goldberg hasn’t wrestled a full match since WrestleMania XX. He has made a handful of appearances recently, but those were simply Spears or Jackhammers. None of them were full-on wrestling matches. To that end, can we really expect Goldberg to be in good enough shape to wrestle against Brock Lesnar, of all people?

The short answer is, no. The long answer… is still no.

Expecting Goldberg to work a solid match with Lesnar is like expecting the Undertaker to bust out his suicide dive so late in his career. WWE appears to be promoting Goldberg/Lesnar as Goldberg’s first match since 2004. There doesn’t even appear to be any build-up matches beforehand. No test in place to see if Goldberg can still go, or more importantly, if fans will still react to him in the same way that they used to.

For the most part, people chanted Goldberg during Ryback’s matches, but only because of the similarities between those two wrestlers (and also out of boredom). Hearing fans chanting his name now might not even be a good indicator of his popularity. Given how long he has been away from a WWE ring, there’s a good chance that his ring rust and lack of a connection with the modern WWE fan wouldn’t be what WWE’s looking for.

Next: History Repeats Itself

4. It Could End Up as a Repeat of Their Match at WrestleMania XX

I find it hard trying to understand why WWE wants to replicate one of the biggest disasters in WrestleMania history. The original Goldberg vs. Brock Lesnar match was an unmitigated disaster. The fans turned on both guys when it was leaked that both of them would be leaving after that match.

That was twelve years ago, when internet fansites didn’t play as prominent of a role as they do today.

Nowadays, access to rumors and speculation on wrestlers is virtually instantaneous, which harms surprises and long-term planning. Even if WWE booked this match, there’s a good chance the crowd could turn on them just like they did at WrestleMania XX.

This would hold especially true if WWE goes to the old tropes that made that first match. Two behemoths barely moving or selling each other’s offense. Big move after big move without any underlying storytelling or psychology. Constant no-selling from both guys (this isn’t 1990s All Japan, where that sort of thing actually made sense). All of these things would spell a disaster for such a match-up.

Worse, modern fans are fickle and turn on wrestlers very easily. Just look at what happened to Dean Ambrose, Roman Reigns and even Lesnar himself. Dean was wildly popular, but fans have started to turn on him as of late, leaving him in wrestler’s purgatory on SmackDown. Reigns was once a cheered powerhouse, and is now among the most despised wrestlers in modern WWE history.

As for Lesnar, his gimmick has officially jumped the shark. Fans no longer care about ‘Suplex City’ as much as they did previously, and his matches have become formulaic. Given these changes, WWE are taking a risk that’s more likely to blow up in their face than bring in big money.

Next: The Biggest Losers In a Goldverg Vs. Lesnar Match… 3. It Takes Away from the Current Roster

Booking this match highlights a crippling problem in WWE right now. There’s a pronounced overemphasis on older talent from the 1990s and 2000s on today’s WWE product. Triple H, Brock Lesnar, the Undertaker, and to a lesser extent John Cena and Randy Orton, are all top stars from previous decades. In the case of the former trio, their matches keep getting top billing, even though that spot should go to the top stars of today.

While it does make sense to give us a bit of nostalgia from time to time, that shouldn’t come at the expense of the future. WWE should be hyping its current roster of top guys as the most important people on the roster.

Instead, aging stars from the past and authority figures trump the top champions on both shows. This is a major reason why WWE can’t sustain ratings growth. A major portion of its current fanbase consists of die-hards who’ll commit to WWE no matter what the company does. Gaining new fans becomes nearly impossible because there’s too much emphasis on the past with WWE.

By booking Lesnar/Goldberg, WWE’s trying to tell us, “hey, remember the good old days of the early 2000s? Now you can relive them with this classic match-up. ” What they’re actually telling us with this match-up is, “the new guys and current champions are nowhere near as important as these two guys who were in their primes over a decade ago.”

Of course, Lesnar and Goldberg are still useful as wrestlers on the WWE roster. This is because…

Next: A Better Way To Use Goldberg 2. It Would Be More Exciting to See Goldberg Wrestle Someone Else

In his interview, Goldberg discussed explicitly how he had a long list of people he wanted to fight, and Lesnar wasn’t on that list. Whether true or not, it would be far more interesting to see Goldberg face someone other than Lesnar.

With this sort of ‘fantasy booking,’ the possibilities are endless. Putting that juggernaut against someone he has never faced would be far more exciting.

Imagine a contest like Goldberg vs. John Cena, the old face of WCW versus the certified face of WWE. Or Goldberg vs. Chris Jericho (many fansites have written at length about the old backstage hostilities between these two). Or even Goldberg versus Roman Reigns (say what you want about Reigns, there would be considerable fan interest in this contest). Or Goldberg vs. Kevin Owens (because, why not?)

But Goldberg versus Brock Lesnar? That matchup just screams of being outdated.

WWE seem to have found a specific role for Lesnar on the roster. He destroys anyone who gets in his way with his realistic (albeit less-flashy) MMA-oriented style and pumps a degree of legitimacy back into WWE’s product. He’s best served fighting current WWE stars, until WWE finally pulls the trigger on someone and have them defeat him in a major match. He’s the closest thing WWE has to an active legend that retains an aura of legitimacy.

It would be far more appropriate to have Lesnar lose to someone WWE plans on making into a long-term star, instead of wasting his time on someone who’d make just as few appearances as Lesnar does.

Next: How This Match Would Impact Goldberg 1. Regardless of Match Outcome, Goldberg Loses

Let’s be honest here. Does anyone out there really think Goldberg would defeat Brock Lesnar after being away from WWE for so long?

No matter what he does, Goldberg will always be seen as a WCW guy. And for many people still in WWE, some wounds heal more slowly than others. Guys like Vince and Triple H must certainly not like the idea of Goldberg defeating Lesnar who, despite his stint in MMA, cut his teeth in WWE. If anything, a second Goldberg run would be much like his first run in WWE or Sting’s in-ring career in WWE: poor booking and more high-profile losses than victories.

If Goldberg wins, it would make Lesnar, the biggest ass-kicking machine in WWWE right now, the most dangerous force in the company, look unbelievably weak for losing to a guy who hadn’t wrestled a full match in over a decade. If Lesnar wins, it’ll shatter whatever’s left of Goldberg’s mystique and would end up being a waste of a signing.

Related Story: Why Lesnar vs. Former WCW Star Will Disappoint Us All

It’s a lose-lose scenario regardless of match outcome.