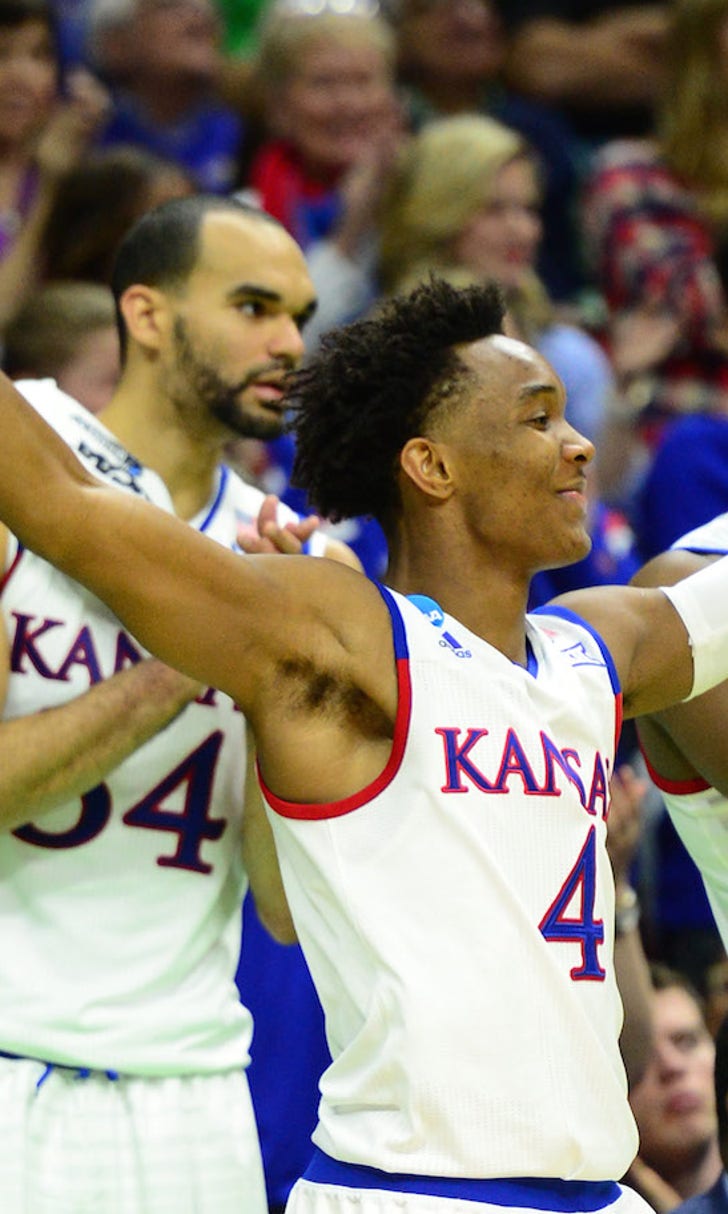 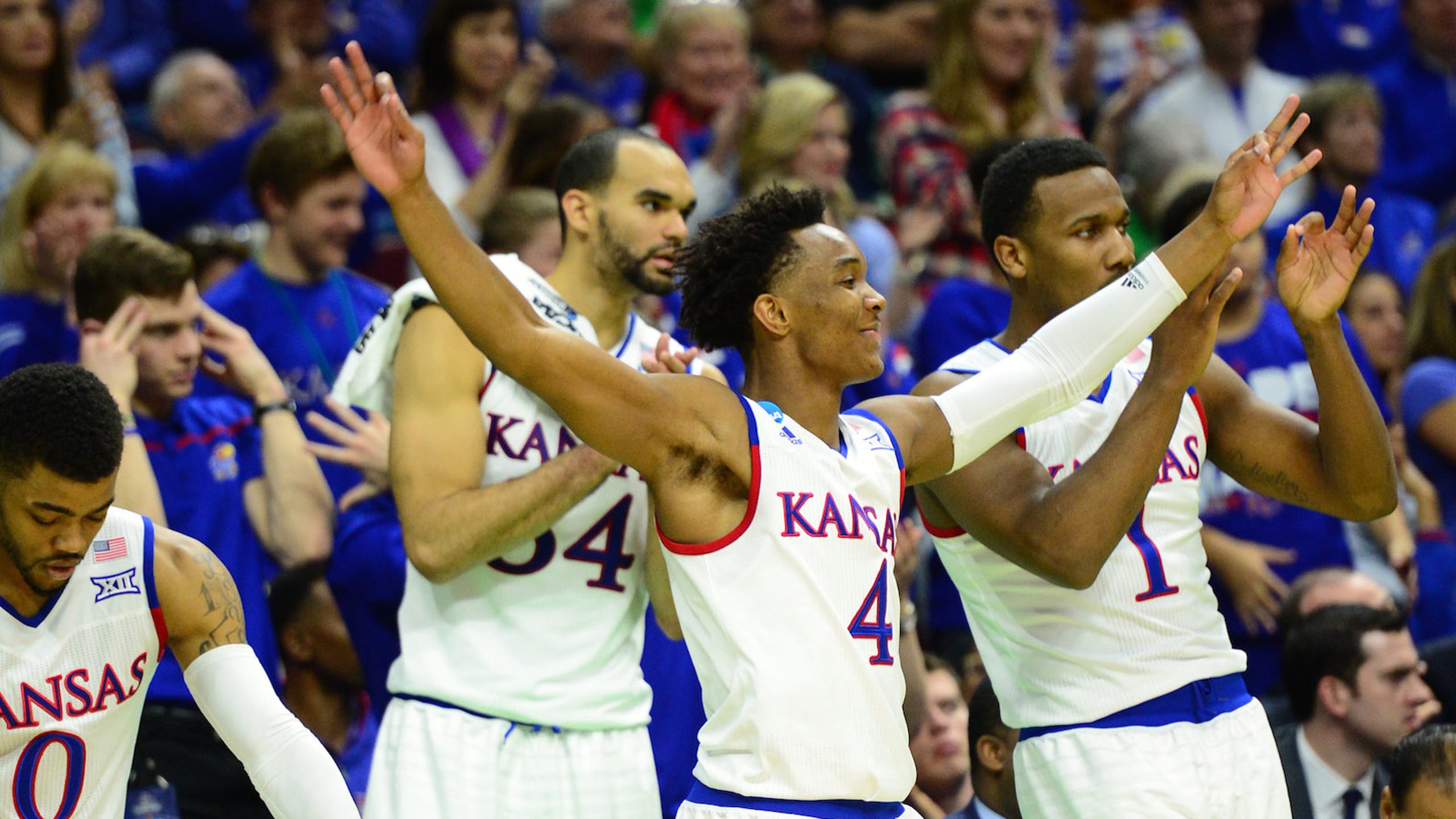 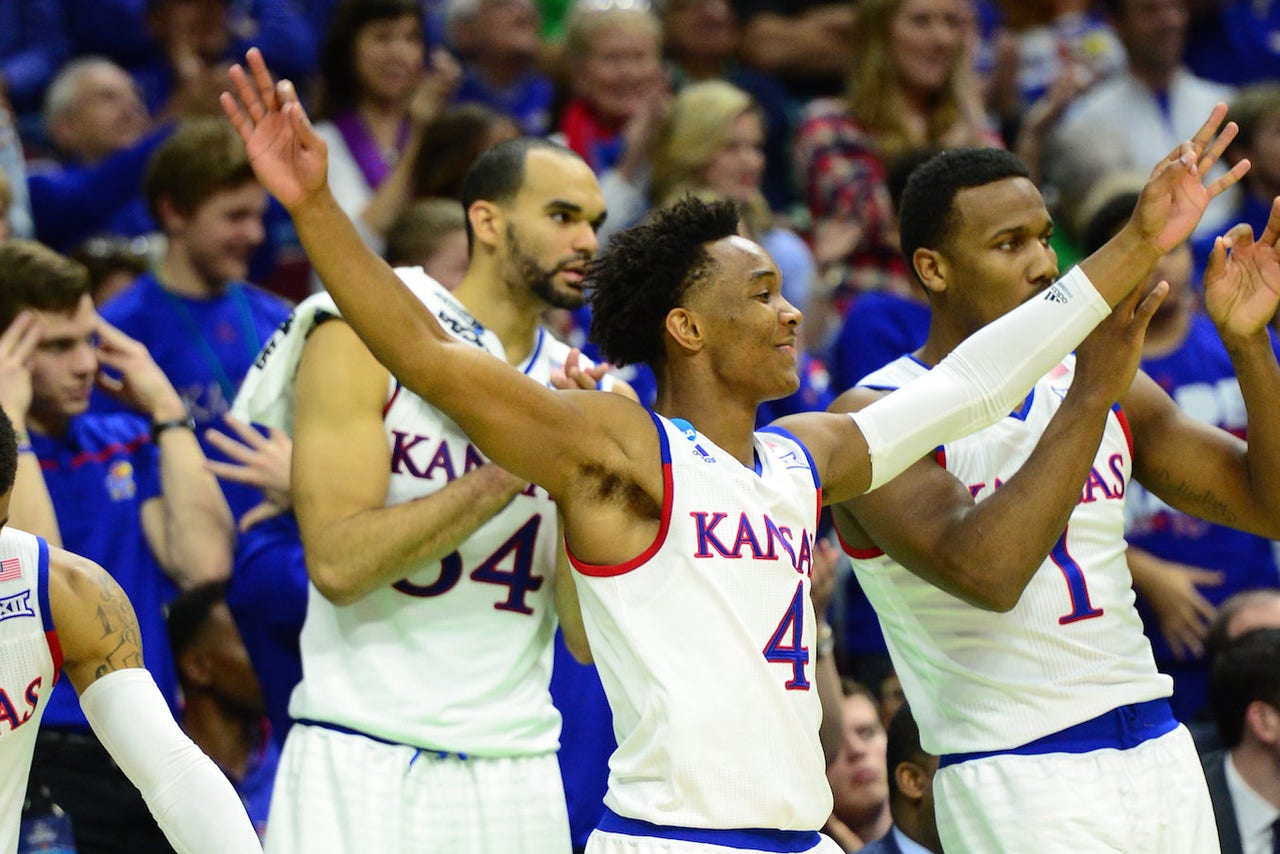 DES MOINES, Iowa -- Kansas earned the top overall seed for the NCAA Tournament without getting much of anything from Svi Mykhailiuk.

If the Ukranian guard steps up, look out.

Mykhailiuk scored a career-high 23 points on 9-of-11 shooting and Perry Ellis had 21, leading the Jayhawks to a 105-79 victory over Austin Peay on Thursday.

Landen Lucas added 16 points for the Jayhawks (31-4), who will face Connecticut on Saturday with a chance to return to the Sweet 16 for the first time since 2013.

"We played pretty well in stretches. Didn't guard as well as we needed to guard to have a chance to advance past Saturday," Kansas coach Bill Self said. "So we've got to tighten that up. I do like how our bench played."

Kansas, the No. 1 seed in the South Region, jumped ahead by 20 by halftime and cruised to its 10th straight win in an NCAA Tournament opener.

Josh Robinson scored 24 points for the Governors (18-18), who learned quickly that the magic they leaned on to win four straight and the Ohio Valley title was no match for the talented Jayhawks.

Kansas entered this year's tournament as one of the favorites to win it all after dominating the brutal Big 12 for most the season. Self is looking for his second national championship, and the Jayhawks got off to a strong start by dismantling the overmatched Governors.

The most promising development was the play of Mykhailiuk.

Mykhailiuk, an 18-year-old reserve whose production often has failed to live up to his promise, didn't even score in wins over Baylor and West Virginia in the recent Big 12 tournament. But he hit three of his first four 3-point attempts, and his three-point play early in the second half helped put Austin Peay away after it closed to 61-44.

"It's like that all the time in practice. He didn't surprise me because I see it all the time from him," Kansas forward Jamari Traylor said. "He's just got to stay confident like this."

Kansas star Wayne Selden, who averaged a paltry 2.5 points in four previous NCAA Tournament games and was shut out in a loss to Wichita State last March, also impressed with seven points in the first 12 minutes. He finished with 14 points.

Any hope the Governors had at pulling off a monumental upset -- or even staying close -- was done in by a brutal start from the floor. Austin Peay hit just seven of its first 24 shots, with many of those misses from close range.

Chris Horton had 14 points and 10 rebounds in his final game for the Governors.

Kansas: Even though Kansas was barely bothered by the Governors, Self was his usual animated, well, self. After a rare Mykhailiuk mistake, Self screamed "Svi! What are you doing? Good God!"...The Jayhawks shot 56 percent from the field.

Austin Peay: The Governors fell to 2-8 in the NCAA Tournament. Their last win came in 1987 over Illinois, 68-67. ... Austin Peay actually led for 1:18 in the first half before Kansas got rolling.

Mykhailiuk didn't score at all in the NCAA Tournament last season. But he was the best player on the floor at times on Thursday, hitting four 3s and shooting 5 of 6 from inside 20 feet.

The Governors were just 4 of 15 from 3-point range. But surprisingly, they got the free-throw line 10 more times than Kansas and went 25 of 37. ... Devonte Graham went scoreless for Kansas but dished out six assists.

Kansas will face ninth-seeded Connecticut in the second round on Saturday.