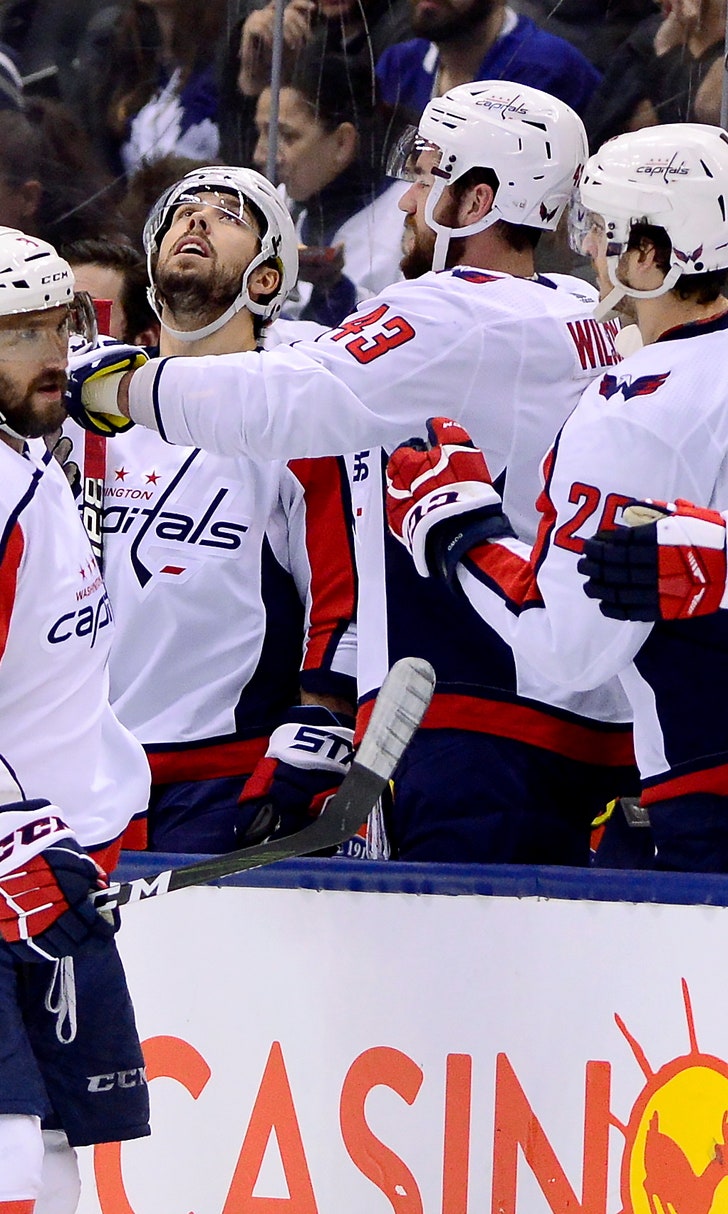 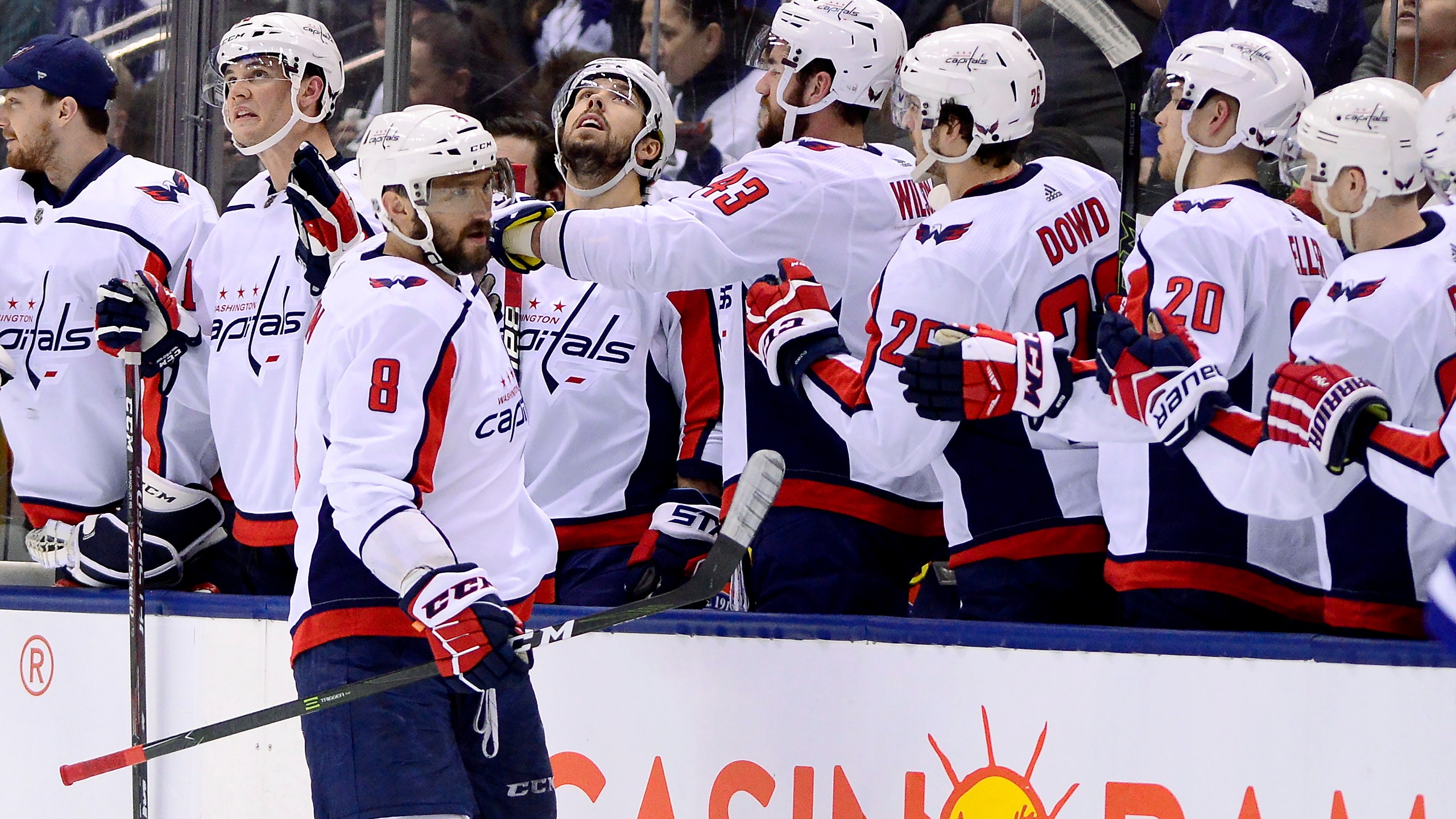 TORONTO (AP) — Alex Ovechkin scored the 650th goal of his career and Braden Holtby made 40 saves as the Washington Capitals defeated the Toronto Maple Leafs 3-2 on Thursday night.

Tom Wilson had a goal and an assist, and Brett Connolly also scored for Washington, which won consecutive games for the first time in two weeks. Lars Eller added two assists.

The Leafs, who were playing at home for the first time since Feb. 6 following a season-long six-game trip that ended with a 3-2-1 record, entered 7-2-2 over their last 11, but had also dropped two straight.

TAMPA, Fla. (AP) — Nikita Kucherov became the fastest player to 100 points in a season since Mario Lemieux, and he and Steven Stamkos scored in the shootout to lift Tampa Bay.

Kucherov became the league's first 100-point player this season with his 30th goal. He got there in 62 games, one more than it took Lemieux in 1996-97.

Andrei Vasilevskiy had 29 saves and stopped both shootout attempts he faced. The Lightning have won eight straight and earned points in 12 in a row (10-0-2).

Kucherov is the first player in Lightning franchise history to record multiple 100-point seasons and is the seventh player in the past 20 years with back-to-back such campaigns.

Brent Burns picked up his 12th of the season, and Evander Kane added a short-handed goal for the Sharks, who beat Casey DeSmith three times in the opening 14 minutes and kept the Penguins in check the rest of the way to sweep the season series from the team that edged them in six games in the 2016 Stanley Cup Final.

The Sharks have won eight of 10 overall and pulled within one point of Calgary for the top spot in the Pacific Division.

DeSmith finished with 29 saves, but Pittsburgh stumbled out of the gate and never recovered to lose for just the second time in six games.

SUNRISE, Fla. (AP) — Justin Williams had two goals and an assist and Carolina rallied for two goals down to beat Florida.

Nino Niederreiter had a goal and an assist, and Justin Faulk also scored a goal Florida, which has won seven of its last nine games. Peter Mrazek made 27 saves.

Aleksander Barkov, Evgenii Dadonov and Jonathan Huberdeau each had a goal and an assist for the Panthers, whose three-game winning streak was snapped. James Reimer stopped 21 shots in his fourth consecutive start.

NEWARK, N.J. (AP) — Cory Schneider made 30 saves in posting his first shutout since November 2017 and New Jersey beat undermanned Ottawa in a game in which both teams gave indications they were getting ready to make trades in the next few days.

Travis Zajac, Steven Santini, Kurtis Gabriel and Miles Wood scored for the Devils, who won for the third time in four games.

Anders Nilsson had 27 saves for the Senators, whose 22-33-5 record is the worst in the NHL this season.

Galchenyuk used a sweeping deke to get around a defender, faked a move behind the net that fooled goalie Jacob Markstrom and stuffed the puck in against the near post.

NEW YORK (AP) — Zach Parise had a goal and an assist, and Minnesota ended a five-game skid with a win over New York.

Mikael Granlund and Jared Spurgeon also scored and Jordan Greenway added an empty-netter. Devan Dubnyk made 33 saves for the Wild, who earned their first victory since Feb. 9 at New Jersey.

Despite their recent struggles, the Wild are still in the race for one of the final playoff spots in the Western Conference.

Pavel Buchnevich scored for the Rangersm and Henrik Lundqvist made 31 saves.

Rookie Jesperi Kotkaniemi and Tomas Tatar also scored for the Canadiens, who won their second straight. Carey Price stopped 29 shots for his 25th victory of the season.

Michael Raffl scored in the third period for the Flyers, who have dropped two straight after winning three in a row.

Flyers goalie Carter Hart gave up three goals on nine shots before being pulled 10:33 into the game. It was the second straight game Hart was yanked. Brian Elliott stopped 29 of 31 shots in relief.

NASHVILLE, Tenn. (AP) — Roman Josi had a goal and an assist as the Nashville topped Los Angeles and moved atop the Central Division with its third win in four games.

The Predators have 77 points, one more than Winnipeg (76), though the Jets have three games in hand on Nashville.

Kyle Turris scored for Nashville, which also swept the season series with Los Angeles. Goalie Pekka Rinne made 28 saves for the win.

Michael Amadio scored for the Kings, who are 0-4-2 in losing their sixth straight.

Radek Faksa and Alexander Radulov put Dallas up 3-0 with goals in a 65-second span midway through the second period. Tyler Seguin also scored for the Stars, who snapped a three-game losing streak in which they were shut out twice. Anton Khudobin stopped 43 shots while starting his seventh consecutive game for the Stars.

Leon Draisaitl, Sam Gagner and Oscar Klefbom also scored for the Oilers, who have won two games out of their last 13.

Anders Lee, Brock Nelson and Cal Clutterbuck scored for the Islanders, who have lost two straight.