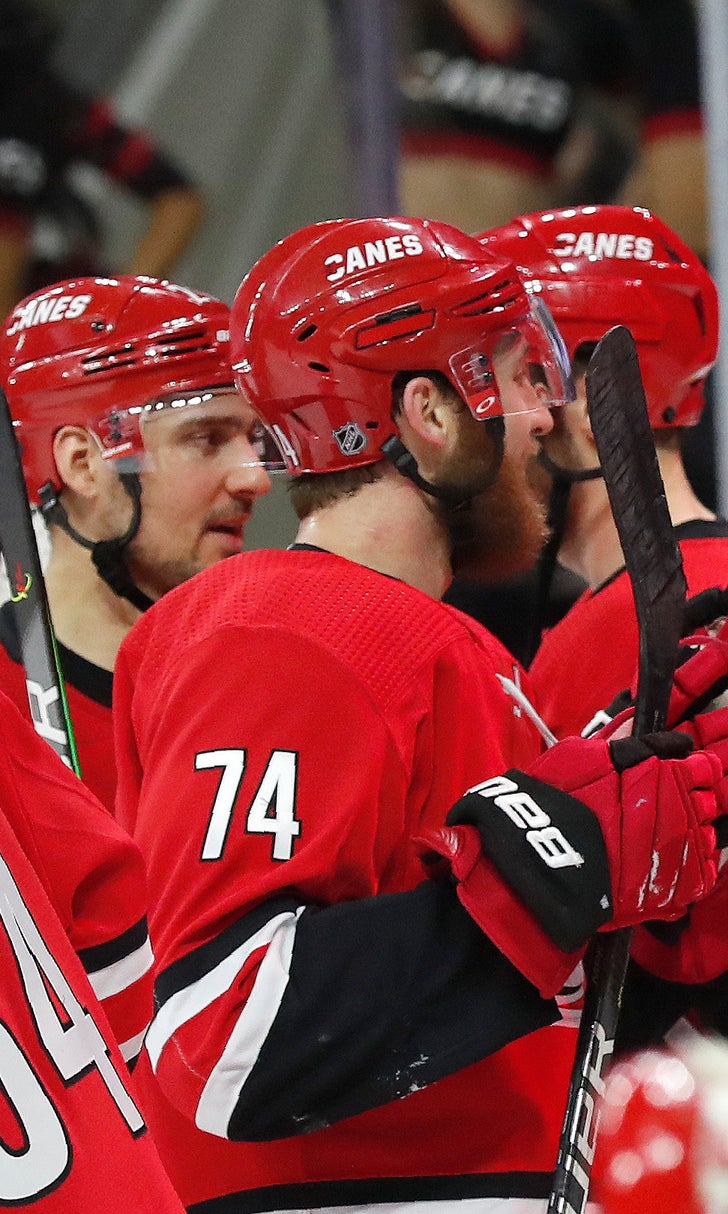 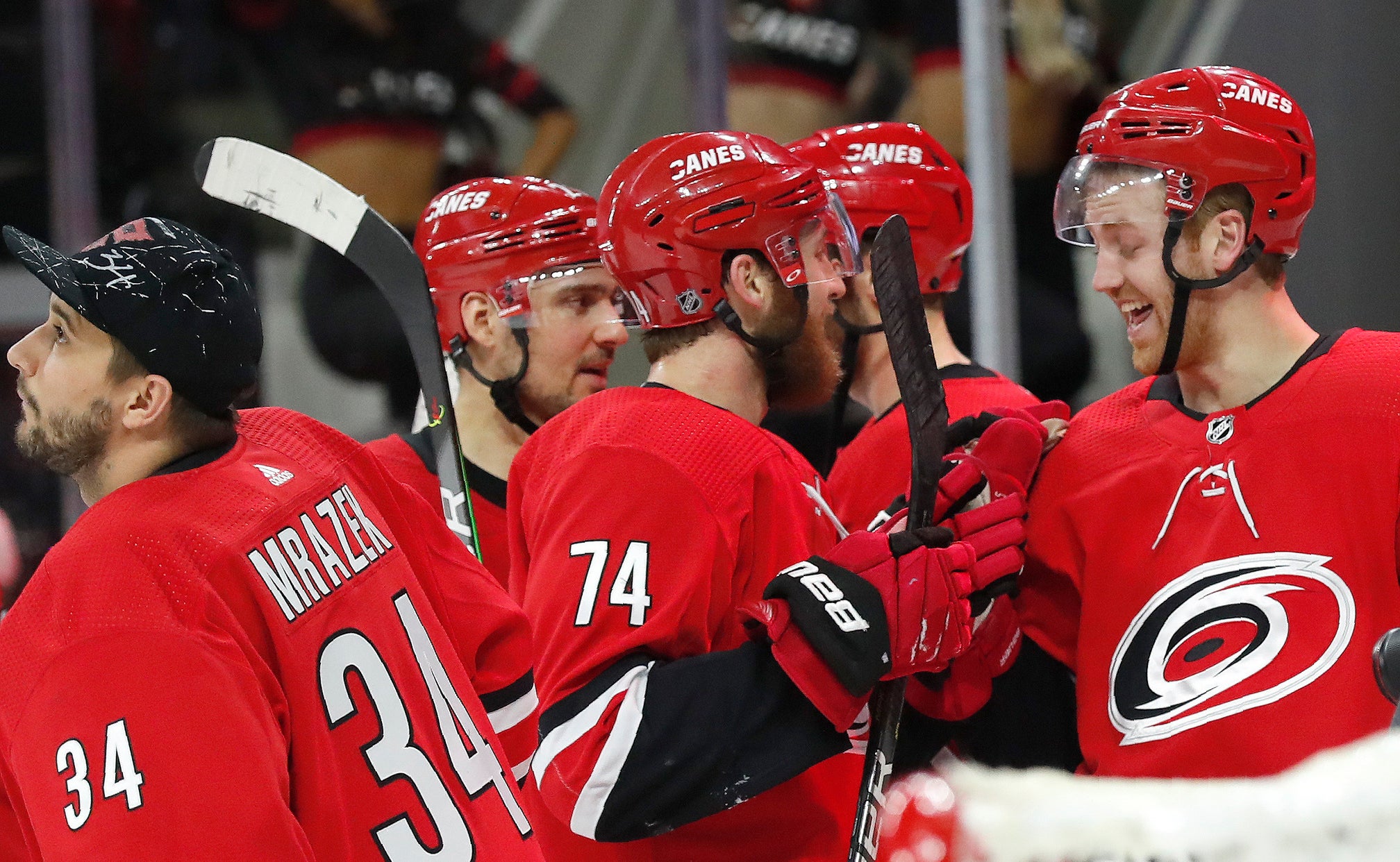 RALEIGH, N.C. (AP) — After beating the Philadelphia Flyers in overtime, the Carolina Hurricanes announced a big addition to their roster.

Dougie Hamilton scored 1:56 into overtime to give Carolina a 5-4 win over Philadelphia on Tuesday night, and the Hurricanes' mood was further buoyed by the signing of forward Justin Williams.

The team announced the 18-year veteran has signed a contract for the remainder of the season. Williams will earn a base salary of $700,000. He can earn an additional $1.3 million in potential bonuses and team play in the regular season and the playoffs.

Williams has won three Stanley Cups — one with the Hurricanes and two with the Los Angeles Kings — and has 312 goals and 474 assists in 1,244 career games. He didn’t sign with any team before the season but has been in negotiations with Carolina for some time.

“There is no adjustment because we know what he is,” Hurricanes coach Rod Brind’Amour said. “He’s been here. He’s a Hurricane. ... It will be an adjustment for him to get back up to speed. That’s the whole thing. He’s been out a long time. But I’ve said many times that we’ll welcome him back.”

Williams joins a team that broke a two-game losing streak and improved to 3-2 on its current seven-game homestand when Hamilton scored on a shot between goalie Brian Elliott’s pads.

Warren Foegele, Jake Gardiner, Lucas Wallmark and Joel Edmundson also scored for the Hurricanes, who bounced back from a two-goal, first-period deficit with four straight goals, then squandered a two-goal, second-period lead in a sloppy finish.

“We’re happy to get the two points there, but that’s not the way we’re supposed to play,” Foegele said. “And it’s pretty evident to everybody watching that we’re not playing the way we know we can, and we kind of got lucky there.”

Travis Konecny, Michael Raffl, Nicolas Aube-Kubel and Travis Sanheim scored for Philadelphia, which lost its fourth straight and dropped five of six on a road trip that concluded Tuesday.

The Flyers' grueling travel schedule didn’t prevent them from getting off to a fast start. Konecny scored 37 seconds into the game on Philadelphia's first shot, which he squeezed between the blocker and the body of Carolina goalie James Reimer.

With 8:57 elapsed, Jake Voracek intercepted a pass by Hadn Fleury and found Raffl in front of the net for another score.

“I think we took a step in the right direction,” Philadelphia coach Alain Vigneault said. “Now we’ve got to get home.”

After falling behind by two in the opening minutes for the second straight game, the Hurricanes struck back when Wallmark scored off the rebound of Brock McGinn's shot just 43 seconds after Raffl’s goal. Foegele evened the score at 2-2 later in the period when he lifted the puck high into the net off a cross-ice pass from Jordan Staal.

“That was a tough start, obviously,” Brind’Amour said. “A couple weird goals. I give the guys credit, though. Nobody on the bench was hanging their heads or anything. We were just talking about getting it back, and I thought that first goal was really important.”

Defensemen Gardiner and Edmundson scored 1:45 apart in the second period for the Hurricanes, but Aube-Kubel cut the Flyers’ deficit to 4-3 before the end of the period with a shot that Reimer fumbled between his glove and his arm after a turnover by Jaccob Slavin.

Philadelphia tied the score at 4-4 with 4:11 remaining in regulation when Sanheim skated unchecked from behind the net to the front and wristed a shot between Reimer’s pads.

Both goalies struggled. Reimer allowed two goals on shots that sneaked between an arm and his body. Elliott had difficulty controlling rebounds and gave up a pair of goals on slap shots by defensemen operating from the point area.

Vigneault was pleased that Voracek, Konecny, Sean Couturier and Claude Giroux helped the Flyers salvage a point in the standings on a difficult night.

“We need our top performers to perform at the top end, and for the most part these guys did that,” Vigneault said.

Carolina, meanwhile, bounced back from a slow start and exited the building with a win and the anticipation that Williams can help them.

“We know how good a player he is and how good a person and everything,” Hamilton said. “I don’t think it will be an adjustment. He’s been around, he knows what he’s doing, and I’m sure he’ll figure it out.”

NOTES: Both teams have struggled defensively over the past few weeks. Philadelphia has surrendered at least five goals in five of its last six games, including four in a row. Carolina has given up at least three goals in seven of its last eight games, averaging 4.1 goals against per game during that stretch. ... Voracek has two goals and 10 assists in his last 10 games. ... Wallmark has 10 points in his last 10 games (five goals, five assists) after recording 10 points in his first 33 games of the season.

Flyers: Host Washington on Wednesday to begin a three-game homestand.

Hurricanes: Meet Arizona on Friday as their homestand continues.