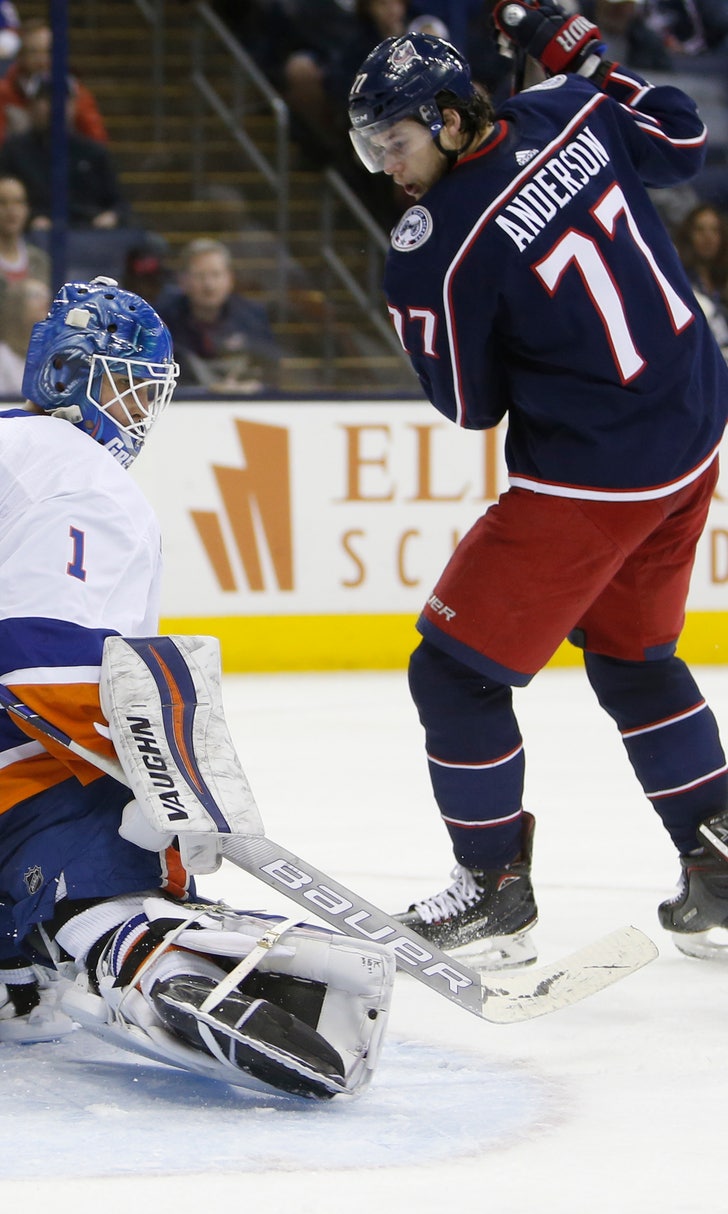 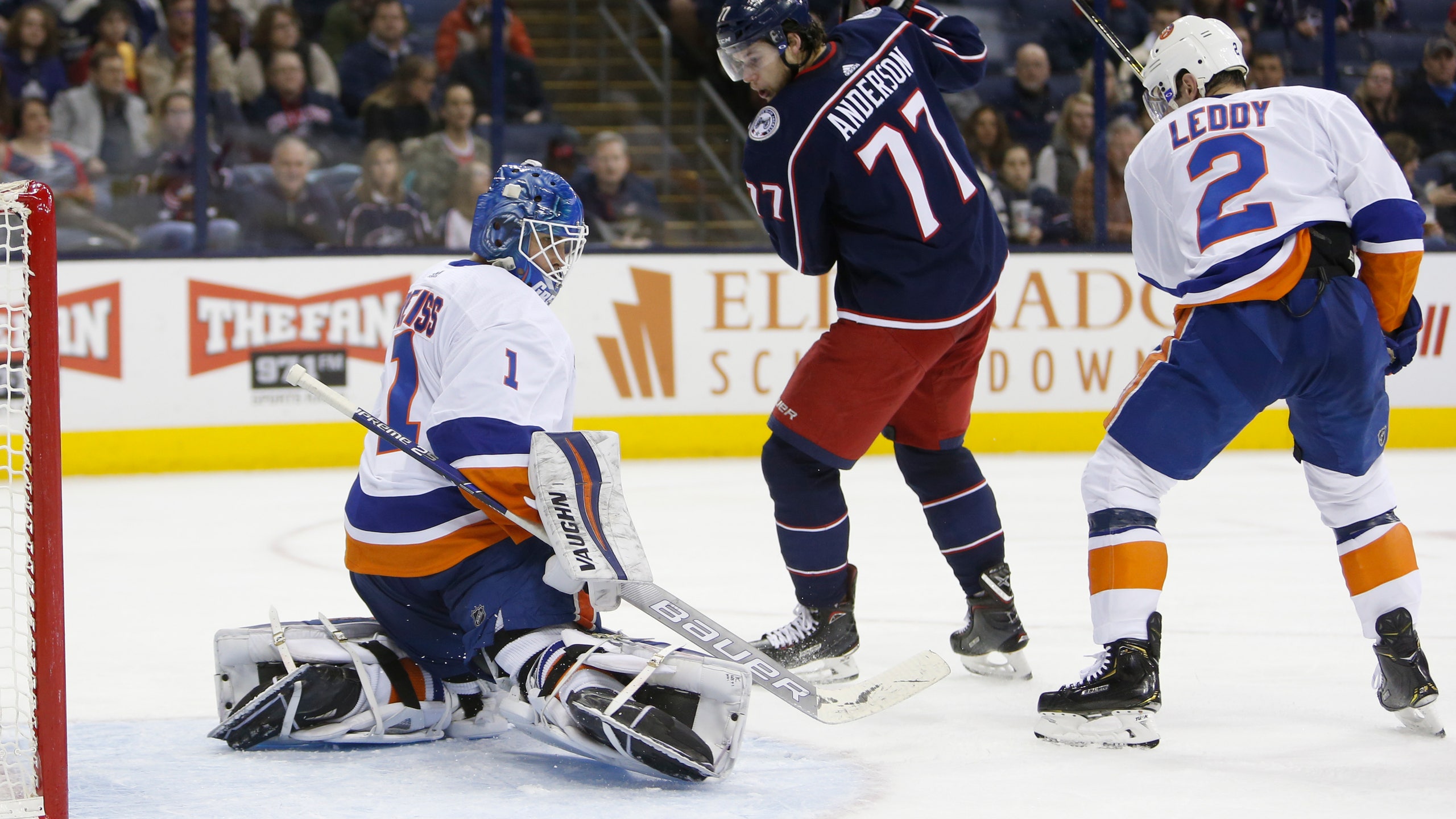 Jakub Vrana and Tom Wilson each had a goal and an assist, and Nicklas Backstrom had two assists for Washington. Braden Holtby stopped 24 shots, and Ovechkin added an assist as the Capitals won for the fifth time in seven games after dropping seven straight.

The Sharks took an early lead on Kevin Labanc's 11th goal at 2:06 of the first period, but it was all Washington after that.

LAS VEGAS (AP) — Auston Matthews scored two goals, including the 100th of his career, to lead Toronto over Vegas.

Morgan Rielly scored his fifth game-winner when his shot made its way through traffic to beat Marc-Andre Fleury and put Toronto ahead 4-3 at the midway point of the third period.

Vegas, meanwhile, has lost three in a row and a franchise-record five straight at T-Mobile Arena, including the first three of a four-game homestand.

Casey Cizikas scored twice on breakaways and Josh Bailey also had a goal for the Islanders, who cruised to their fifth win in the last seven games.

Greiss was outstanding in getting his 12th career shutout and the Islanders defenders showed why they are tops in the NHL in keeping opponents' pucks out of their net. New York, which began the night three points ahead of Washington atop the Metropolitan Division, snapped the Blue Jackets' four-game win streak.

Sergei Bobrovsky had 24 saves for the Blue Jackets, who is tied with Pittsburgh with 67 points but holds third place in the Metropolitan due to a game in hand. The game was a letdown for Columbus, which seemed to have momentum after shutting out the Capitals by the same score on Tuesday.

Tyler Johnson, Mikhail Sergachev and Alex Killorn also scored to help the Lightning improve to 6-0-2 in the last eight games and reach 90 points in 58 games this season. Andrei Vasilevskiy stopped 32 shots for his fifth shutout of the season and 17th of his career to tie Ben Bishop for most in team history.

Dallas goalie Anton Khudobin was pulled from the game twice, allowing five goals on 21 shots. Landon Bow finished with four saves in 27:07 of ice time for Dallas, which fell to 1-2-1 in the past four games.

Brandon Saad and Artem Anisimov each had a goal and an assist, and Jonathan Toews and Drake Caggiula also scored for the Blackhawks. Cam Ward stopped 41 shots.

Damon Severson and Travis Zajac scored to give the Devils a 2-0 lead with a little more than three minutes left in the first period before the Blackhawks took over. New Jersey has lost two straight and five of its last six.

Joel Edmundson scored early in the first and had an assist on Tarasenko's goal late in the period. Tarasenko put the Blues up 3-0 late in the second period with a power-play goal, giving him nine goals and eight assists during a career-high 10-game points streak.

LOS ANGELES (AP) — Elias Pettersson and Brock Boeser scored in a shootout after Adam Gaudette tied it with 1:38 remaining in the third period to lift Vancouver.

Pettersson and Boeser also scored in regulation for the Canucks, who had lost four straight road games. Jacob Markstrom made 35 saves through overtime, before allowing a shootout goal to Ilya Kovalchuk and then stopping Anze Kopitar and Adrian Kempe.

Alec Martinez had a goal and an assist for the Kings, who had not played at home since Jan. 21 because of the All-Star Game, bye week and a six-game road trip while Staples Center hosted the Grammys. Jonathan Quick made 24 saves.

SUNRISE, Fla. (AP) — Vincent Trocheck scored in the third round of the shootout to lift Florida over Calgary.

Elias Lindholm scored for Calgary late in the third period to extend the game, but Matthew Tkachuk missed in the third round of the shootout with a chance to do the same.

Mike Hoffman had a goal and an assist, and Evgenii Dadonov scored for Florida. Mark Jankowski also had a goal for the Flames, who lost their fourth straight. Florida goalie James Reimer, pulled to start the third period in Sunday's 5-2 loss to Tampa Bay, stopped 41 shots. Mike Smith had 30 saves and lost his third straight.

Dominic Toninato got his first NHL goal, and J.T. Compher and Sven Andrighetto also scored for the Avalanche, who were 0-5-3 during their skid. Matt Nieto had two assists, and Semyon Varlamov stopped 24 shots.

Brandon Tanev scored his career-high 12th goal of the season for Winnipeg, which lost in regulation at home for the first time in 10 games (8-1-1). Connor Hellebuyck made 31 saves.

Ryan Hartman and Brian Boyle also had the goals for Nashville, which snapped a three-game skid.

Tomas Tatar scored and Carey Price made 35 saves for Montreal, which has lost consecutive games for the first time since early January.

DETROIT (AP) — Andreas Athanasiou scored twice, including a penalty shot, and Jimmy Howard made 40 saves in his 500th game to lead Detroit over Ottawa.

Frans Nielsen scored to break a 2-2 tie late in the second period.

Los Angeles Kings
share story
those were the latest stories
Want to see more?
View All Stories
Fox Sports™ and © 2021 Fox Media LLC and Fox Sports Interactive Media, LLC. All rights reserved. Use of this website (including any and all parts and components) constitutes your acceptance of these Terms of Use and Updated Privacy Policy. Advertising Choices. Do Not Sell my Personal Info