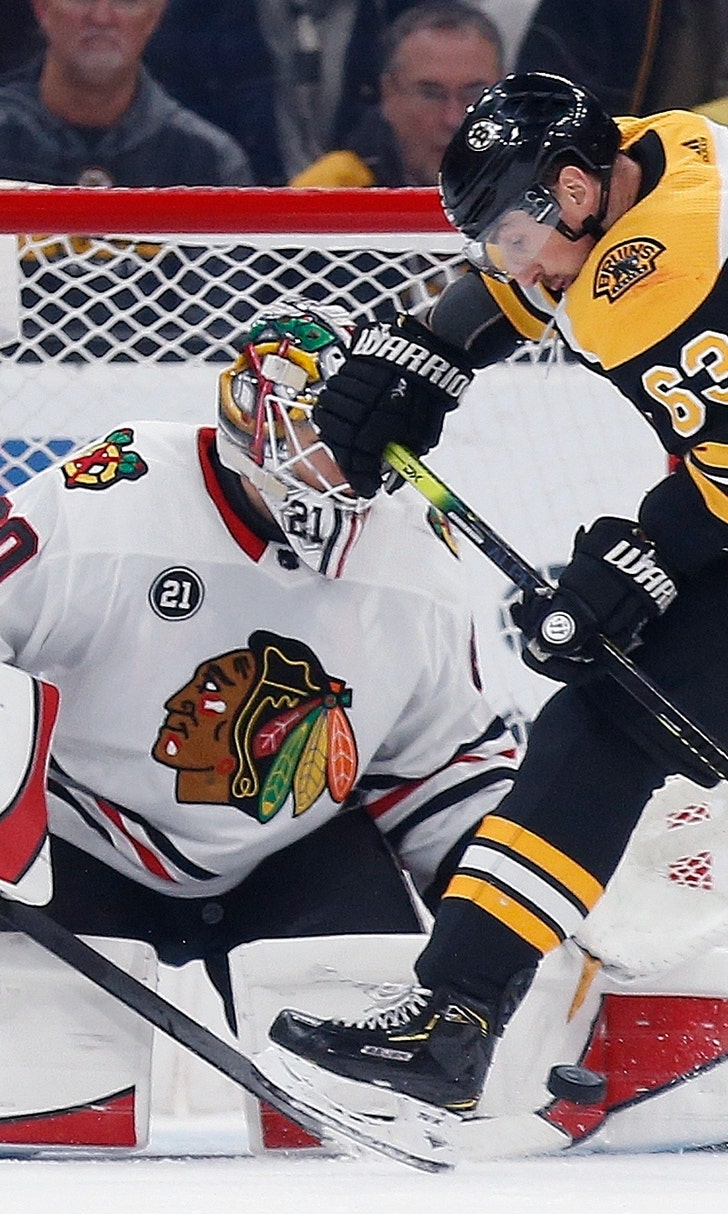 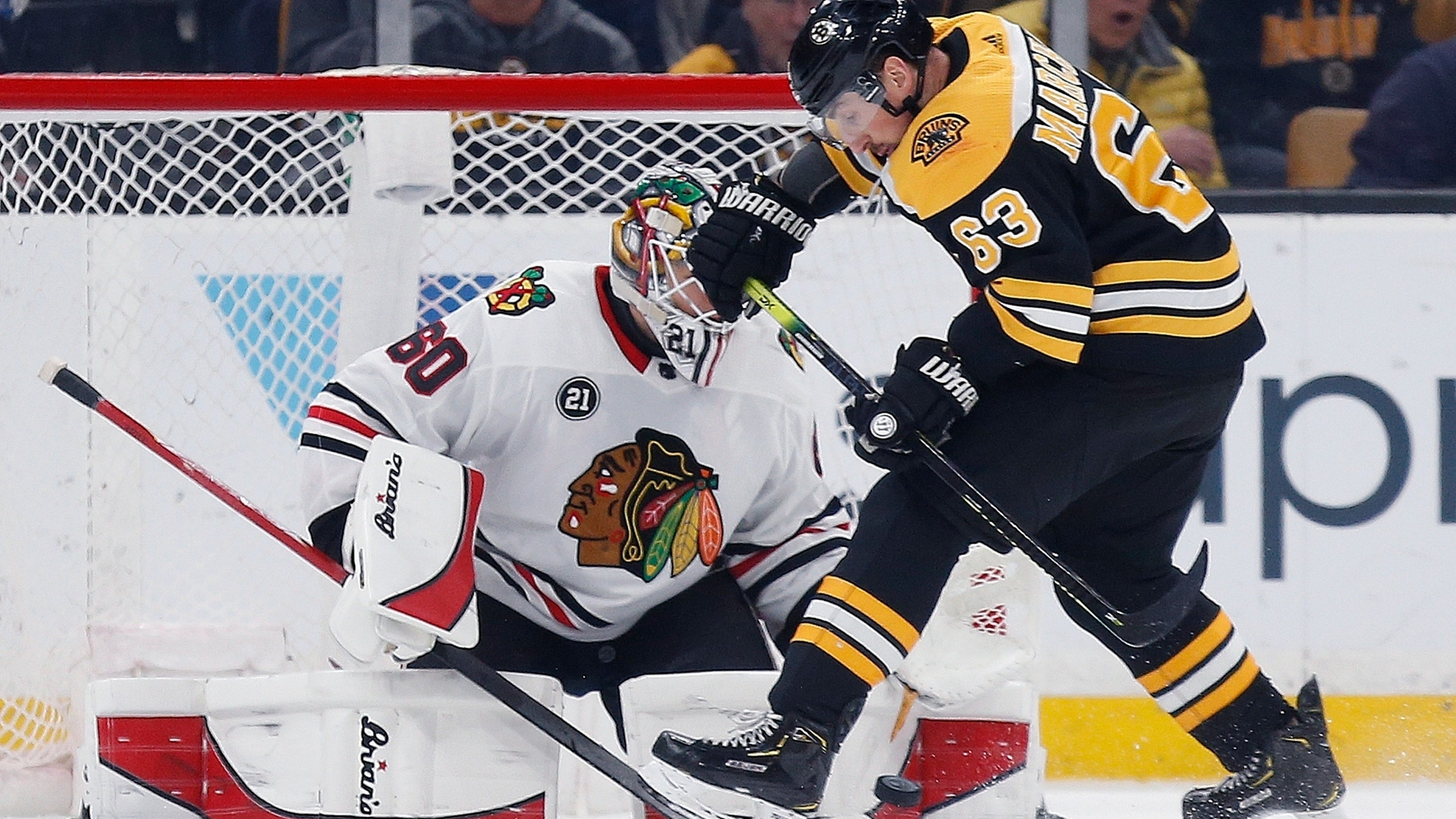 BOSTON (AP) — David Krejci, Danton Heinen and Brad Marchand each scored during a four-minute span at the end of the first period and the Boston Bruins beat the Blackhawks 6-3 on Tuesday night to snap Chicago's seven-game winning streak.

Krejci scored again in the third period, when Marchand picked up his third assist, to help the Bruins win for the fifth time in six games. Jake DeBrusk and Heinen each had a goal and two assists, and Tuukka Rask stopped 23 shots for Boston. Peter Cehlarik also scored for Boston, and Patrice Bergeron had a pair of assists.

Collin Delia made 31 saves, and Alex DeBrincat and Duncan Keith scored for Chicago, which hadn't lost since Jan. 17. Patrick Kane had an assist for the 14th straight game, tying Stan Mikita for the longest assist streak in the history of the Original Six franchise.

The Bruins have not lost in regulation in eight games.

The Coyotes snapped an 0-3-1 slide on the road, while handing Vegas its fourth consecutive home loss, the second time in franchise history it's lost four straight at T-Mobile Arena.

Brandon Pirri and Nate Schmidt scored for Vegas, which is now 16-8-3 at home and has lost six of eight. Marc-Andre Fleury, who made his league-leading 50th start of the season, made 21 saves.

SUNRISE, Fla. (AP) — Anton Khudobin recorded his second shutout of the season and Tyler Seguin had two goals and an assist as Dallas topped Florida.

Esa Lindell also scored, and Alexander Radulov had two assists for Dallas, which snapped a two-game losing streak and won for the sixth time in eight games.

With Stars goalie Ben Bishop out, Khudobin made his third consecutive start, stopping 30 shots and winning for just the second time in six starts. It was the eighth shutout of Khudobin's career.

Roberto Luongo recorded 16 saves for Florida, which lost its second straight, both at home at the start of a seven-game homestand. The Panthers were shut out for the first time this season — the last team in the NHL to be blanked.

Kucherov has 88 points, including seven over his last two games. Kucherov and Point (72) are the second pair of Tampa Bay teammates to reach 70 points in 57 team games. Martin St. Louis and Vincent Lecavalier did it in 2006-07.

Cedric Paquette, Anthony Cirelli, Yanni Gourde and Steven Stamkos also scored for the NHL-leading Lightning, who are 5-0-2 over the last seven games. Andrei Vasilevskiy made 19 saves.

Calgary, 1-3-1 in its last five games, got two goals from Sean Monahan. Mark Giordano had the other Flames goal, and David Rittich stopped 21 shots.

Jason Pominville scored the go-ahead goal 6:49 into the second period. Jeff Skinner scored off a faceoff draw won by Eichel, and Johan Larsson sealed the victory with 2:25 left. Linus Ullmark stopped 24 shots to improve to 3-0-1 in his past four starts.

The Sabres improved to 3-2-1 six games into a seven-game homestand. Overall, Buffalo improved to 28-21-7 and picked up its 63rd point, one more than last season.

Casey Cizikas scored for the Islanders, who had a three-game winning streak snapped and lost in regulation for just the second time in 13 games (9-2-2). Robin Lehner stopped 19 shots in dropping to 13-3-1 in his past 17 starts.

COLUMBUS, Ohio (AP) — Sergei Bobrovsky made 13 of his 20 saves in the third period to lift Columbus over Washington.

Anthony Duclair, Nick Foligno and Artemi Panarin scored for the Blue Jackets, who won their fourth straight and remained in third place in the Metropolitan Division, two points behind Washington.

Braden Holtby had 29 saves and held off the Blue Jackets on four power plays with a few close calls.

Micheal Ferland and Justin Williams also scored for the Hurricanes, who wrapped up a season-long five game trip. Curtis McElhinney made 25 saves.

Mark Stone scored for the Senators, who had their two-game winning streak snapped. Anders Nilsson made his third straight start and stopped 33 shots.

Luke Glendening had a goal and an assist, Nick Jensen had two assists and Dylan Larkin also had a goal for Detroit. Goalie Jimmy Howard made 32 saves for the win.

Viktor Arvidsson and P.K. Subban scored for Nashville, which has lost three straight for its longest skid since losing four straight between Dec. 17-22. Ryan Johansen and Filip Forsberg had two assists apiece.

Jaden Schwartz, Ryan O'Reilly, Mackenzie MacEachern and Tyler Bozak also scored for the Blues, whose eight goals were a season high. St. Louis' winning streak is its longest since Jan. 17-Feb. 5, 2015, when it also had seven consecutive victories.

Rookie Jordan Binnington made 20 saves to win his sixth straight start, becoming the second goalie in Blues history with a winning streak of at least six games. Brent Johnson twice won seven in a row in 2000 and 2001.

Pavel Zacha, Kyle Palmieri and Mirco Mueller scored for the Devils, who have lost 10 straight to St. Louis.

Keith Kinkaid allowed all eight St. Louis goals, a career high, on 39 shots, and fell to 0-4-1 against the Blues.

Mika Zibanejad scored twice and Pavel Buchnevich had the other goal for the Rangers. Mats Zuccarello added two assists.

Connor Hellebuyck made 34 saves for the Jets, who have at least a point in their past nine home games (8-0-1).

Henrik Lundqvist stopped 32 shots for the Rangers (24-24-8), who dropped the first of a four-game road trip.

Sean Couturier and Claude Giroux each had a goal and an assist and Ivan Provorov also scored for the Flyers, who are 11-2-1 since Jan. 9.

Luke Kunin scored twice, while Zach Parise and Jared Spurgeon added goals for the Wild, who fell to 1-4-2 since the All-Star break.

Anthony Stolarz made 35 saves for the Flyers. Devan Dubnyk stopped 21 of 26 shots for Minnesota.

Kapanen and Kadri each finished with two goals, while Auston Matthews added a goal and two assists.

The Avalanche pulled Semyon Varlamov after giving up four goals on 17 shots. Philipp Grubauer allowed one goal in relief.

East
share story
those were the latest stories
Want to see more?
View All Stories
Fox Sports™ and © 2021 Fox Media LLC and Fox Sports Interactive Media, LLC. All rights reserved. Use of this website (including any and all parts and components) constitutes your acceptance of these Terms of Use and Updated Privacy Policy. Advertising Choices. Do Not Sell my Personal Info