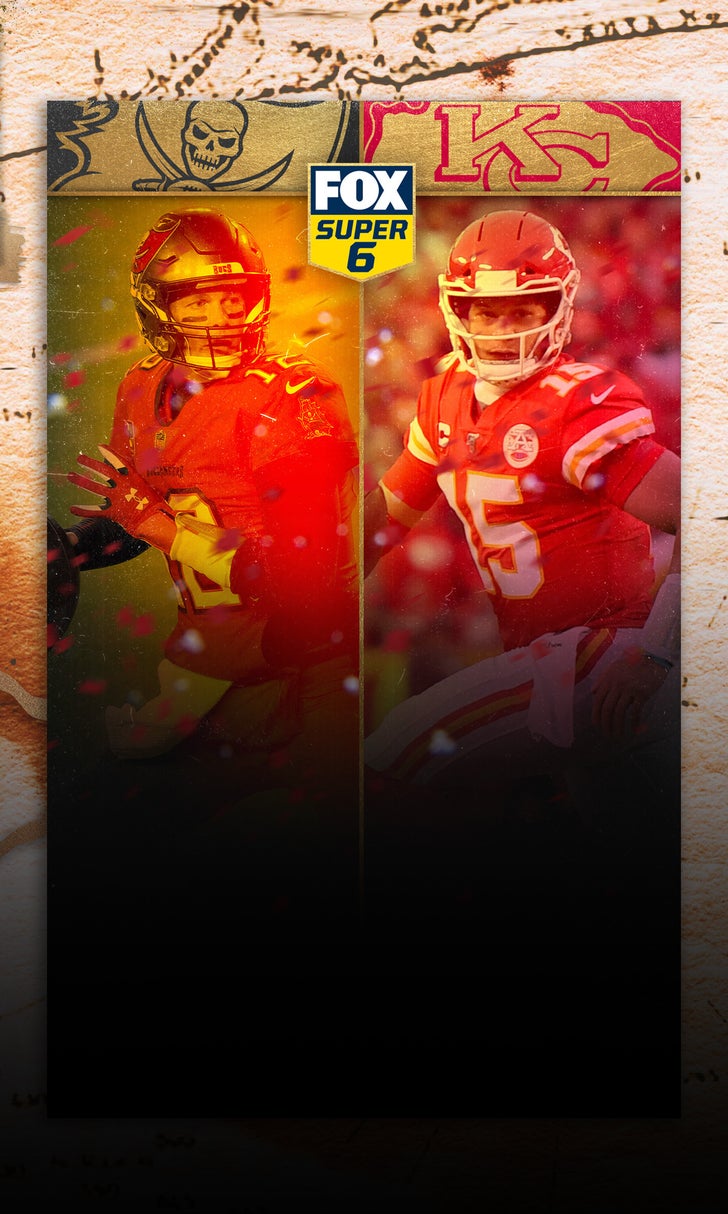 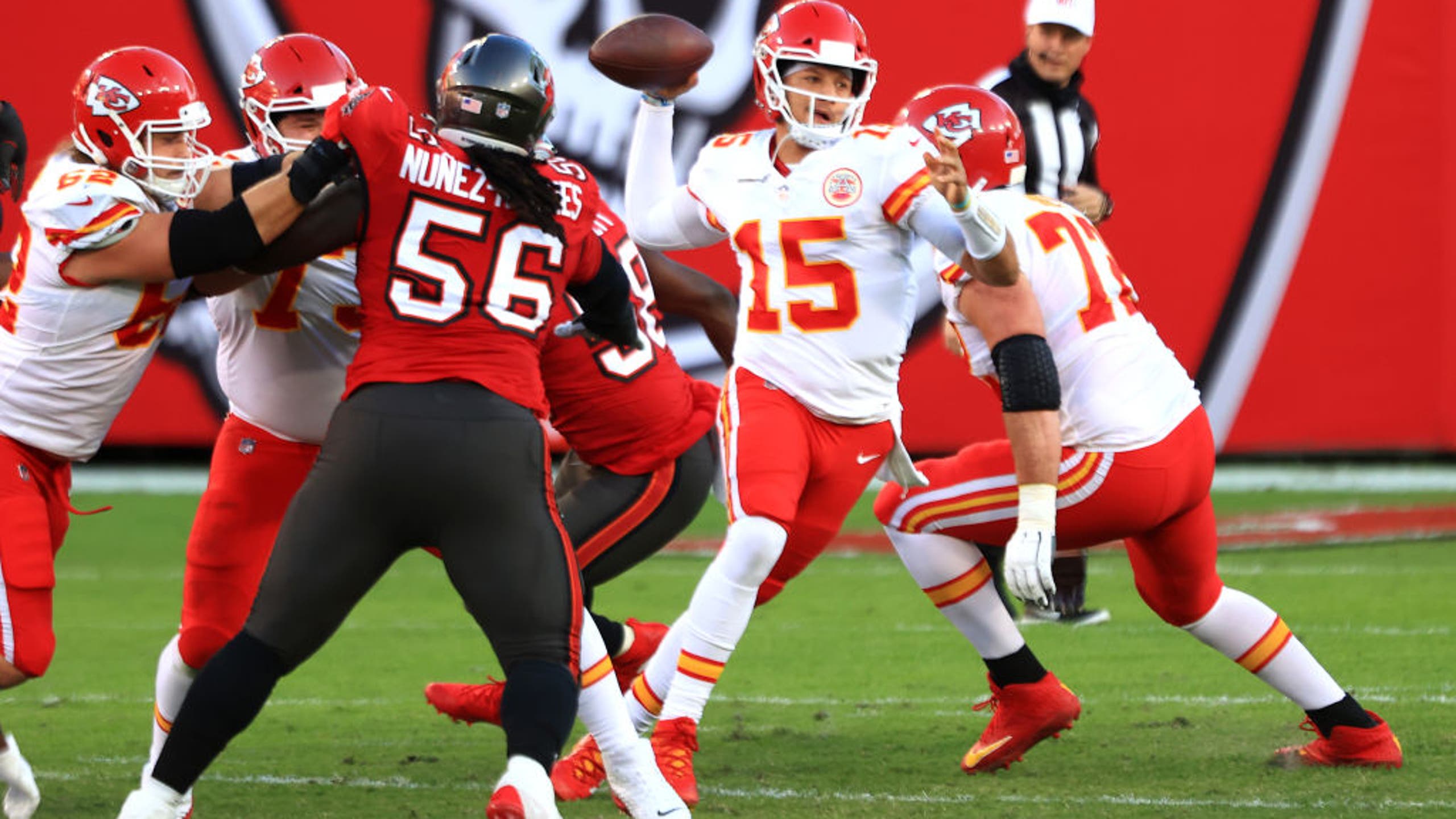 The Kansas City Chiefs are attempting to become the first team in 17 years to win back-to-back Super Bowls.

Now, his Buccaneers are 3-point underdogs to Patrick Mahomes and the Chiefs at FOX Bet in Super Bowl LV.

That line has moved little, if at all, over the past two weeks. Both teams got here by completing sweeps of their opponents in the conference championships: Tampa Bay went 2-0 this season against Green Bay, and Kansas City won both its meetings with Buffalo.

You can get in on the action with the FOX Bet Super 6 contest, where a prize of $250,000 is on the line in the big game. Just download the Super 6 app, and answer six key questions on the game to take your shot.

The two biggest questions for Super Bowl LV (6:30 p.m. ET Feb. 7, CBS): Can the Bucs' defense continue to force turnovers, and can Brady get revenge on Chiefs defensive coordinator Steve Spagnuolo, who twice helped the Giants deny Brady in the big game?

As always with the Super Bowl, there's plenty to bet on besides the final line, and we'll be covering all the key props and wagering possibilities at FOX Sports over the next two weeks.

Here's my advice on how to pick the Super 6:

The game script will likely play out according to two trends: Tampa Bay will do what it has done all season defensively, which is creatively blitz the quarterback (the Bucs ranked second in the NFL in blitzes). The Bucs also will run far too much on early downs in an effort to slow the game down and limit mistakes.

Even when teams drop back in a zone and concede the run to the Chiefs, Mahomes is throwing a lot, completing 19 passes against the Patriots and 21 at Buffalo in the regular season. The opposing offenses in those games played terribly; I suspect Brady will have more success with weather not a factor.

The over/under for the game at 56.5 suggests aggressive offenses scoring early and often, and the smart pick is 50 or more completions. THE PICK: 50-plus

Despite winning three consecutive playoff games, Brady has had fewer completions than each of his opposing QBs, and he has completed less than 60% of his passes in his past four postseason games. He did lead two games this month virtually wire-to-wire, but consider this: Brady has played 19 games this season, and his number of completions in the playoffs showed considerable drop-off from the regular season.

His 18 completions against the Saints ranked 17th out of his 19 games. His 20 completions at Green Bay ranked 16th. Of course, a 43-year-old QB is expected to wear down late in the season. The week off should help Brady, but the edge here goes to the Chiefs and their passing game. THE PICK: Chiefs by 7-8

The Bills had no running game to speak of at Kansas City, and the Browns trailed 19-3 and never had much of a chance to get the ground game started (22 carries for 112 yards). But Bruce Arians is hard-headed and likely going to continue to run Leonard Fournette and Ronald Jones into the ground.

I suspect Todd Bowles will not change his ways and will continue to blitz Mahomes, and given all the offensive line woes for the Chiefs, I suspect the Chiefs will be running less than Tampa. THE PICK: Bucs by 25-34

When these teams met in the regular season, Brady and Mahomes combined to go 64-for-90 passing. That was with K.C. grabbing a 17-0 lead and then being up 27-10 heading into the fourth quarter. The Bucs had just seven rushing attempts in the second half.

This ultimately comes down to Bowles and his Bucs defense. Will he leave his cornerbacks one-on-one while continuing to blitz? That didn’t work the previous time around, but it worked against Aaron Rodgers (five sacks). If Bowles doesn’t change his ways, the Chiefs will dominate through the air against an overrated Tampa secondary. THE PICK: Chiefs by 55-74

We just saw the Bills kick two field goals inside the Kansas City 10-yard line, and all it showed was that field goals don’t help you keep up with that relentless Chiefs offense. Short of penalties pushing teams back into fourth-and-long, it’s tough to imagine either team kicking many short field goals.

Then again, Tampa elected to not attempt a long field goal before the half in Green Bay, using the "no risk it, no biscuit" strategy, and Brady delivered a game-changing touchdown. K.C.’s Harrison Butker struggled from 40-49 yards this season (3-for-5), and Tampa’s Ryan Succop missed two of those as well (7-for-9). THE PICK: Bucs, 43-45 yards

The Bucs come in with the "home-field advantage" of sleeping in their own beds and eating home-cooked meals for a week. Also, this is the first time Brady will be an underdog in the Super Bowl since his first trip, when he was a 14-point underdog to the Rams – aka "The Greatest Show on Turf"  – and the Patriots pulled off a big upset.

These Bucs have won seven straight, including three in a row on the road in the postseason. But they have benefitted greatly from turnovers, scoring six touchdowns on seven turnovers by Washington, New Orleans and Green Bay.

Mahomes has committed just two turnovers in seven career playoff games. Absent major mistakes by a QB who rarely makes them, it is difficult to make a strong case for Tampa Bay to win. Mahomes will hoist his second Super Bowl trophy in his first three seasons as a starter as the Chiefs win 33-27. THE PICK: Chiefs by 4-6

You can get in on the action with the FOX Bet Super 6 contest, where a prize of $250,000 is on the line in the big game. Just download the Super 6 app, and answer six key questions on the game to take your shot.