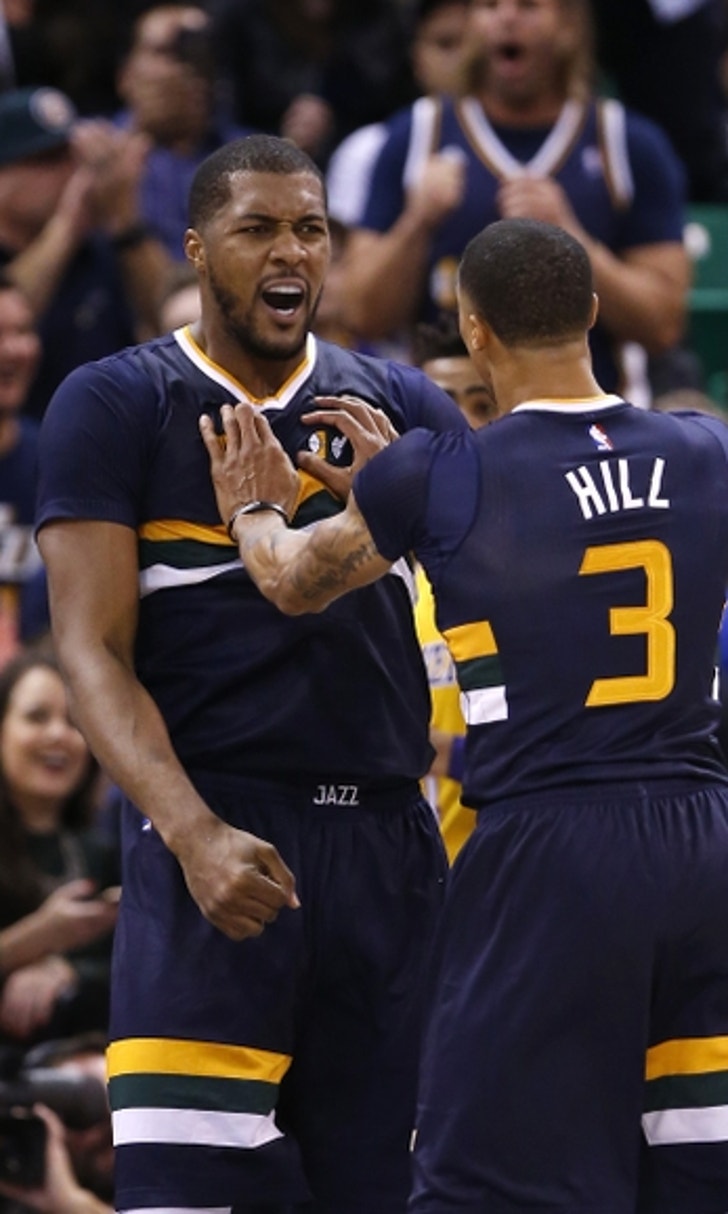 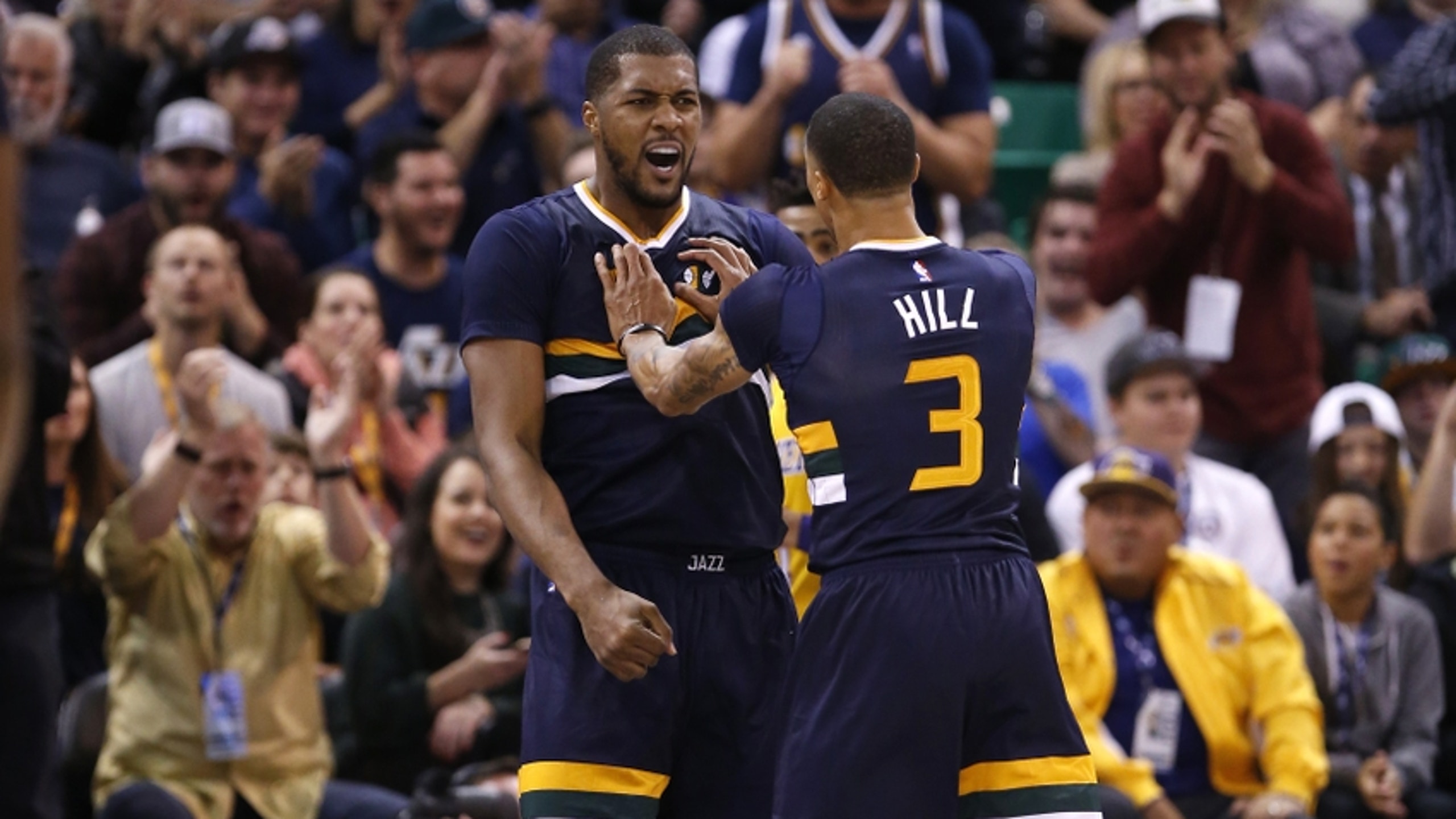 BY Fansided and Ryan Aston/FanSided via Purple and Blues • June 30, 2017
share

It’s hard to believe, but the midseason mark has come and gone for the Utah Jazz. Following Monday night’s game against Devin Booker and the Phoenix Suns, Coach Quin Snyder and his team have just 39 games left to play on their regular season schedule for 2016-17.

After the offseason hype and an injury-plagued three months of action, the focus in Jazzland has officially shifted from how good this team can be to how far it can go in the NBA Playoffs.

So, as we’re officially halfway home, there’s no better time than the present to examine those questions and take stock of the season so far. This is exactly what Alan Zaugg of TornBySports, myself and voices from around the Jazz blogosphere have set out to do this week.

If you’re on Jazz Twitter, you know all about Alan. He, John English and Devin Masters host the best Jazz podcast around, Jedi & J.E.R.M.S. on the Jazz. Do yourself a favor and give it a subscription post-haste!

In an effort to grade the Jazz season so far, and look toward the future, Alan tapped his partner, Mr. English, Dan Clayton of Salt City Hoops, SLC Dunks’ James Hansen, Purple & Blues alum and TornBySports contributor Greg Foster and yours truly, Ryan Aston, to answer a series of questions about the campaign.

Part I of his piece, with the panel’s first-half grades for the team and the best Jazzman this season is live right now on TornBySports. The remainder of the questions as answered by our panel will be posted there throughout the week, but here are my answers to Mr. Zaugg’s questions —

With everything we know (injuries included) what grade would you give the Utah Jazz through the first 41 games?

Given everything that’s gone down with the injuries, the patchwork lineups and the schedule, the Jazz have done a pretty incredible job for themselves through the first half of the 2016-17 campaign. For their efforts, I’m giving them an A- grade.

In sports and in life, I’ve always adhered to the credo that things are never as good or as bad as they seem. The Jazz have managed to hit both ends of the spectrum; they had a four-game losing streak in November and had a stretch of three losses in four games during the recent road trip, but have also scored multiple three and four game win streaks to arrive at their 25-16 midseason mark.

Through the ups and the downs, my opinion of the Jazz has largely remained the same. They’re a pretty good team and a threat to win a playoff series.

The fact that they’ve managed to not only stay afloat, but thrive in spite of their injuries, ranking among the best teams in the league in terms of offensive and defensive rating, is a small miracle. Hence the high grade.

Now, if they can get their chemistry going and have everyone firing on all cylinders come playoff time – look out.

Who’s the best player on the team to this point?

It’s Gordon Hayward, who continues to be the straw that stirs the Jazz drink. Hayward has played near the All-Star level for a while now, but his consistency and overall production have been better than ever through the first half of the season.

His offensive game alone makes a strong case here; everyone knows about the 22-6-3.5 line, the shooting uptick across the board and the five 30-point games. What really seals the deal for me, though, is his defensive performance.

Hayward is often charged with covering the opposition’s most explosive scorers and manages to hold his own more than you would expect.

Rudy Gobert is a close second here. He’s played in every game for the Jazz, he continues to give the squad its defensive identity and his offensive game has reached new heights. However, Hayward is still the top dog in the 801.

Who’s been the biggest surprise?

George Hill, hands down. Most Jazz people thought the team pulled a rabbit out of their hat when they turned the No. 12 pick in a ho-hum draft into Hill, and I was definitely one of them. What I didn’t expect was for Hill to come in and make this his team almost immediately.

Given the fact that he handled the ball about as much as Ian Mahinmi as a member Indiana Pacers, there was bound to be an uptick. But the 18-4-4 line, 52 percent shooting, 48 percent from three and the team’s 11-1 record when both he and Hayward are in the lineup is probably beyond anything we could’ve reasonably expected.

Who has shown the best improvement?

Gordon Hayward may be Utah’s best player, but Gobert is arguably the most valuable one. He was good before, but I think he’s now established himself as the league’s most intimidating paint presence and a legitimate threat on both sides of the ball.

Obviously, the biggest areas of improvement have come on the offensive side of things. As of this writing, Gobert is second in the NBA in field goal percentage at over 66 percent and leads the league in points per shot at 1.90.

The latter is an incredible number; aided in large part by the fact that Gobert has morphed from the guy who opposing teams fouled intentionally to one that is flirting with 70 percent from the line.

Will Hayward and/or Gobert make the All-Star roster?

As a Top 5 team in the West, the Jazz are definitely deserving of some All-Star representation and, in my estimation, both Hayward and Gobert have earned their spots. Whether or not they actually get them could be another matter entirely.

In my mind, their chances boil down to a couple of factors, assuming neither is named an All-Star starter. First, there’s the question of how many players the Golden State Warriors, San Antonio Spurs and Los Angeles Clippers send to the game. I feel like the combined number should be around five or six, but it could be as many as eight or nine. Right off the top, things start to get tricky for the Jazz duo (and less than great for the league, in my opinion).

The second thing to watch, and one that is difficult to gauge, is how Western Conference coaches will view good players on bad or underperforming teams, i.e. Anthony Davis, DeMarcus Cousins and Damian Lillard. I think all three are proven All-Stars. If all three make it, however, it could mean that one or both of Hayward and/or Gobert get left out.

The last thing to consider is injuries. For example, does someone like Blake Griffin play in the All-Star Game after missing time and, if not, does a Jazz player get the call as an injury replacement?

Will Alec Burks work his way back into the rotation?

I hope so. His performance against the Orlando Magic really gave me renewed hope in his ability to make an impact this season. Of course, if Rodney Hood is out for an extended period of time with the knee, Quin Snyder’s hand could be forced once Burks can handle major minutes.

In any event, I’d like to see Joe Ingles remain in the rotation regardless. If Burks is going to infringe on anyone’s minutes, I would hope that its one of the back-up point guards and not Ingles. Slow-Mo Joe has shown himself to be a valuable bench piece and deserves to be on the floor.

What can we expect to see from Dante Exum?

I, for one, am still high on Dante Exum. Whether or not Quin Snyder feels the same is hard to say. In any case, I don’t see Exum doing anything this season beyond what he was able to accomplish as a rookie.

With the Jazz relying so heavily on George Hill as the starter and Shelvin Mack continuing to play a major role off the bench, even that level of play could be difficult for Exum to attain this year. Barring some kind of move to shake up the backcourt at the trade deadline, minutes will continue to be hard to come by.

Personally, I would like to see him get some run in the D-League. He’s done enough watching the Jazz play from the sidelines. At this point, I don’t know how beneficial it is if that’s his lot as a Jazzman.

Will Rudy Gobert win defensive player of the year or All-Defensive team honors?

Should he? Absolutely. For my money, he changes the game defensively more than any player in the league. However, given the way he’s been snubbed by voters in the past, I have a hard time making any sort of declaration about Gobert bringing home the year-end hardware.

You should seriously look at some of the All-Defensive ballots from the last two years. Insanity abounds.

With the Jazz now among the Top 8 or so teams in the league, Gobert’s exploits are definitely receiving more attention now. But until it’s actually announced that he’s received that recognition, I’m not going to predict anything.

I’m going to stick with the current pace go with an even 50 and a No. 4 or 5 seed in the West. The Jazz are significantly healthier than they were in the early going; Rodney Hood’s unfortunate knee injury on Saturday notwithstanding. Nevertheless, I don’t expect them to go crazy and catch the Houston Rockets.

I see them remaining steady as they reintegrate everyone into the lineup, hone their rotations and rebuild some chemistry. There will be the occasional rough patch, but that’s to be expected. The hope should be that they hit their stride in time for the playoff run.

Will they win a playoff series?

As most of us would probably agree, it’s all about the match-up here. As good as the Jazz are, they’re ultimately going to fall right into that range of teams just outside of the West’s elite. Without a clear-cut favorite among the bunch, it’s probably going to come down to who plays who, home-court advantage and which teams are healthy.

I’m pretty confident in picking the Jazz to win a series with Russell Westbrook and the Oklahoma City Thunder. However, the L.A. Clippers and Memphis Grizzlies are harder.

I, for one, prefer the latter, but either squad would be a tough out.