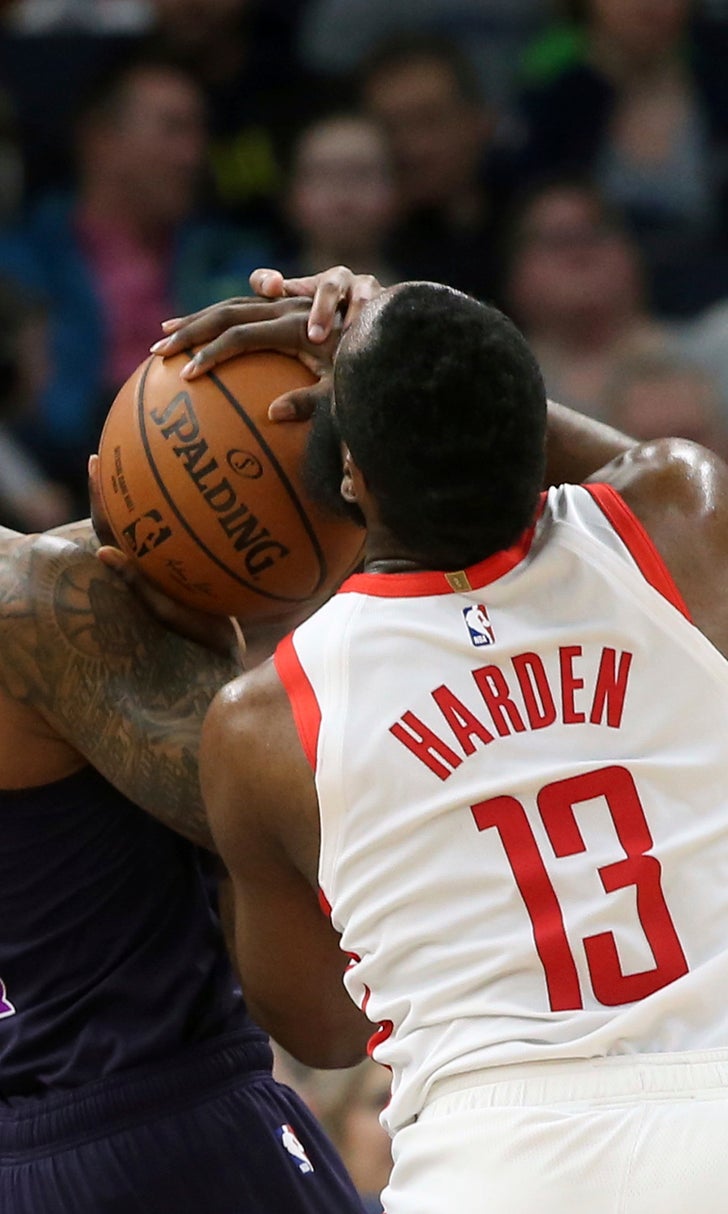 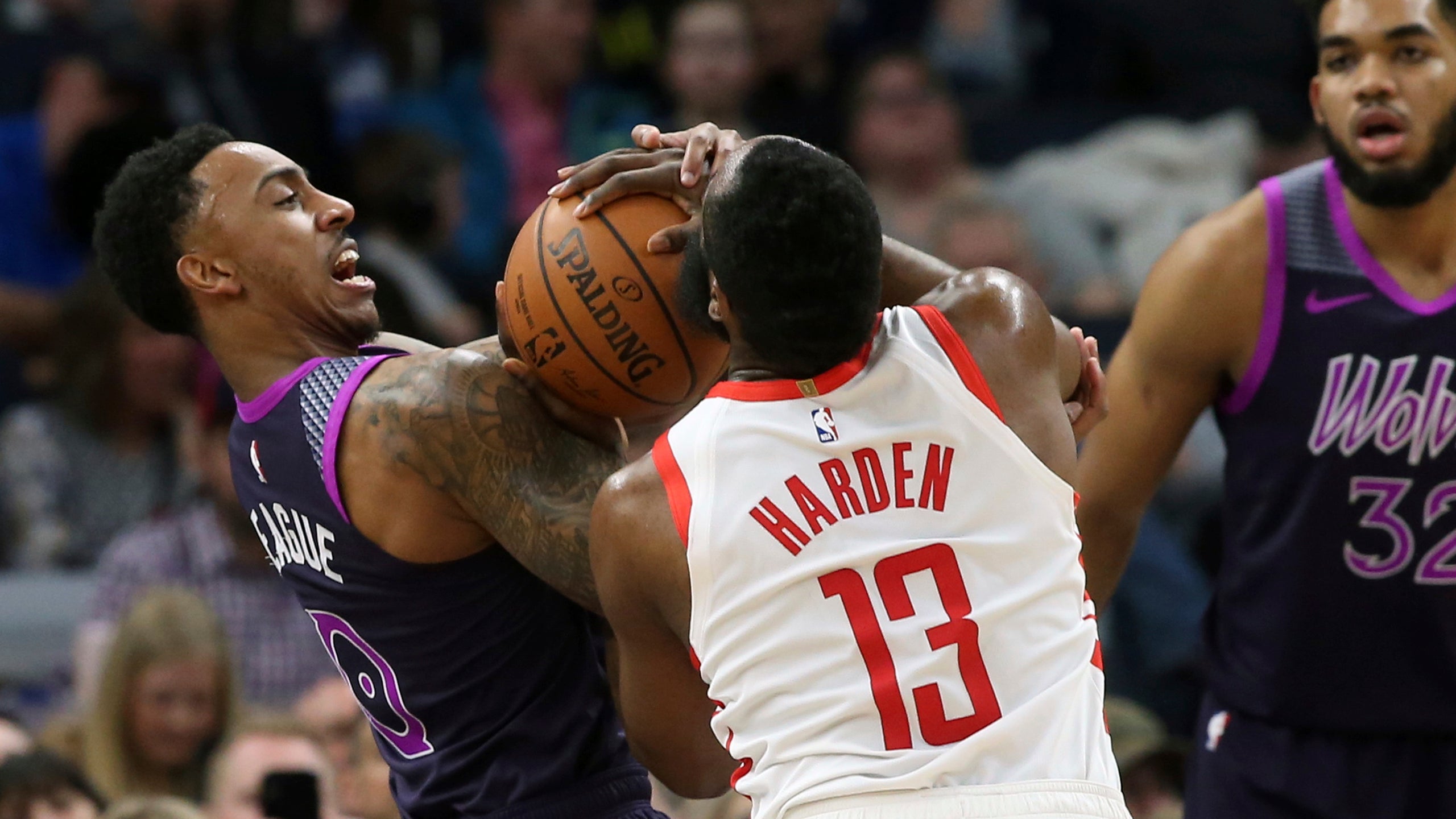 Harden had his 31st consecutive game with 30 or more points, tying Wilt Chamberlain for the second-longest streak in league history. The NBA's leading scorer passed the 30-point mark on his 15th four-point play of the season, getting Josh Okogie in the air with one of his trademark step-back 3s to put Houston up 74-67 midway through the third.

Okogie had 16 points and sparked the Timberwolves to retake the lead with an 18-2 run. The rookie had a breakaway dunk and a 3-pointer to give Minnesota a 77-74 lead, but he brought some of the biggest cheers of the night with an emphatic block on Harden's 3-point attempt with 3:40 to play.

After being stripped by Okogie a few plays earlier, Harden stepped back again behind the arc to attempt the 3. This time, the ball didn't even leave his hand before Okogie leaped forward and stuffed it, bringing the crowd to its feet.

CLEVELAND (AP) — D'Angelo Russell scored 14 of his 36 points in the third overtime and Brooklyn outlasted Cleveland.

DeMarre Carroll's desperation 3-pointer at the buzzer of the second overtime tied the game, and Nets carried the momentum into the third extra session.

Russell, who is headed to play in his first All-Star Game, had two points in the first half and scored Brooklyn's first 11 points in third overtime, including two 3-pointers.

Jake Layman added 17 points off the bench for the Blazers, who had eight players in double figures. The win snapped a two-game skid.

Kevin Durant and Stephen Curry each had 32 points for the Warriors, who rested DeMarcus Cousins following a victory at home over Utah the night before.

Portland led 110-103 before Golden State's Draymond Green was called for a flagrant foul on Zach Collins with 3:54 left. Kerr reacted angrily, throwing his clipboard to court and yelling at the officials before he was ejected.

Serge Ibaka had 10 points and 13 rebounds, and Kyle Lowry had 14 points and 13 assists as the Raptors used a big third quarter to overcome a 12-point deficit and post their fifth straight victory over the struggling Wizards. Jeremy Lin played 25 minutes in his Toronto debut after signing earlier in the day. He was recently waived by the Atlanta Hawks.

Bradley Beal scored 28 points, Jeff Green had 23 and Jabari Parker 22 as Washington lost for the fifth time in seven games.

DENVER (AP) — Nikola Jokic tipped in a basket with less than a second remaining, Isaiah Thomas hit two big 3-pointers in his long-awaited Denver debut and the Nuggets held off Sacramento.

Jokic finished with 20 points, 18 rebounds and 11 assists for his 28th career triple-double, and Paul Millsap matched a season high with 25 points as Denver overcame a 17-point first-half deficit.

Down six late, the Kings tied it on Buddy Hield's layup with 15.1 seconds. After a timeout, Jokic went to work down low, missing his first shot attempt before tipping it in. Hield's last-gasp 3-pointer was off the mark at the buzzer.

Thomas proclaimed his surgically repaired hip good to go prior to the game and was anxious to step back onto the court. He received a standing ovation when he entered the game late in the first quarter.

NEW YORK (AP) — Joel Embiid had 26 points, 14 rebounds and one flying leap over an award-winning actress into the crowd, and Philadelphia handed New York its 18th straight loss.

Tobias Harris scored 25 points and Ben Simmons had 18 for the 76ers, who bounced back from their 112-109 home loss to Boston on Tuesday, sending themselves into the All-Star break with a 37-21 record.

Allonzo Trier scored 19 points and fellow rookie Mitchell Robinson had 14 points and 13 rebounds for the Knicks (10-46), who remain mired in the longest losing streak during one season in franchise history.

It was during the third that Embiid gave the 76ers and plenty of people sitting courtside a scare when he tried to chase down a ball going to the sideline. He went flying just over the head of actress Regina King, who won the Best Supporting Actress award at the Golden Globes, and crashed into the MSG Network statistician working next to broadcaster Mike Breen. The statistician somehow stayed in the game.

INDIANAPOLIS (AP) — Giannis Antetokounmpo started fast and finished strong, picking up a triple-double to help Milwaukee rally late for a victory over Indiana.

The three-time All-Star had 33 points, 19 rebounds and 11 assists, leading the Bucks back from a 10-point fourth-quarter deficit. NBA-leading Milwaukee has won eight of nine overall and seven straight on the road — its longest road winning streak since 1984-85.

Bojan Bogdanovic scored 20 points and Darren Collison added 14 to lead Indiana, which had a six-game winning streak snapped just before the All-Star break.

DALLAS (AP) — Dwyane Wade scored 22 points in what figures to be his final game on the court where he won his first championship, helping Miami beat Dallas.

The 37-year-old who has already said this is his final season was a little better despite one of the stronger games of the season for Dirk Nowitzki, his two-time NBA Finals foe whose record 21st season with the same franchise has the feel of an unofficial farewell tour.

The 40-year-old German finished two points shy of his season high with 12, although most of the highlights in their first meeting of the season came in the first half before the Heat outscored the Mavericks 32-16 in the third quarter and led by as many as 21 points in the fourth.

Lauri Markkanen added 21 points as Chicago ended a franchise-record 11-game home losing streak with their first win at the United Center since beating Orlando on Dec. 21. The Bulls also won for just the fourth time in 22 games.

Avery Bradley scored 15 points for the Grizzlies, who lost for the second straight night.

It is the second straight game that Williams has scored 30 or more points. He had a season-high 45 in Monday's loss at Minnesota.

Montrezl Harrell scored 14 of his 19 points in the first half, and Ivan Zubac scored 16 for the Clippers.