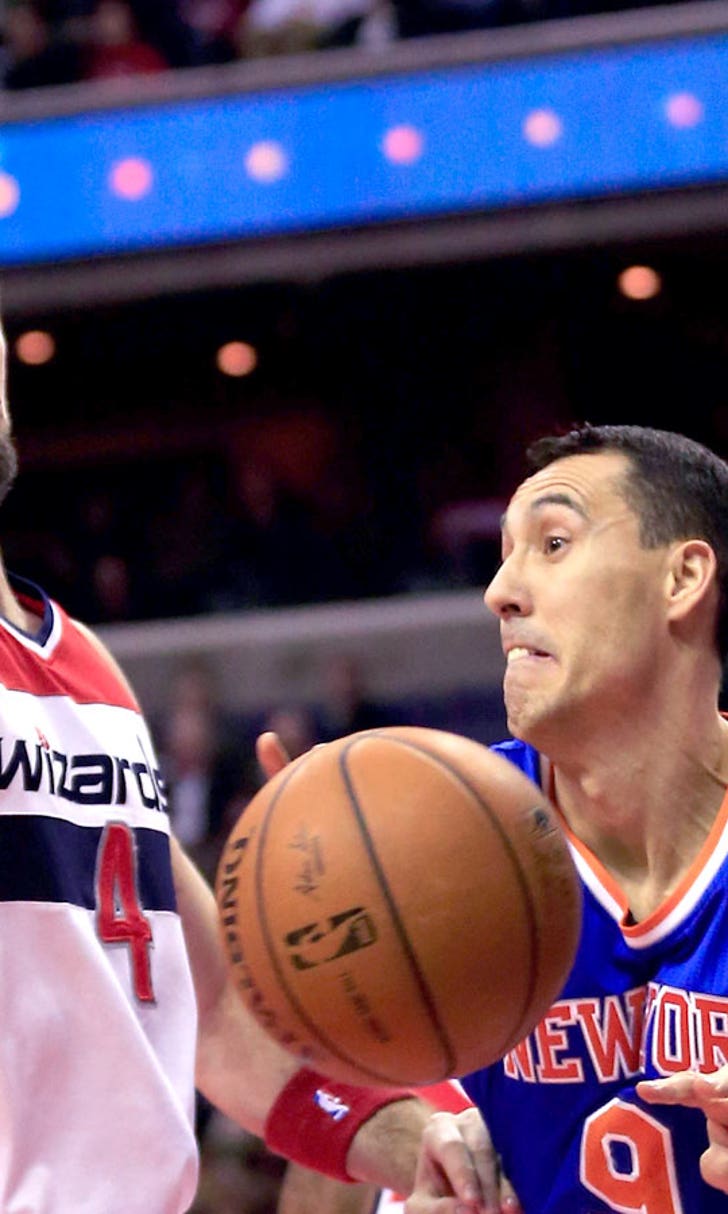 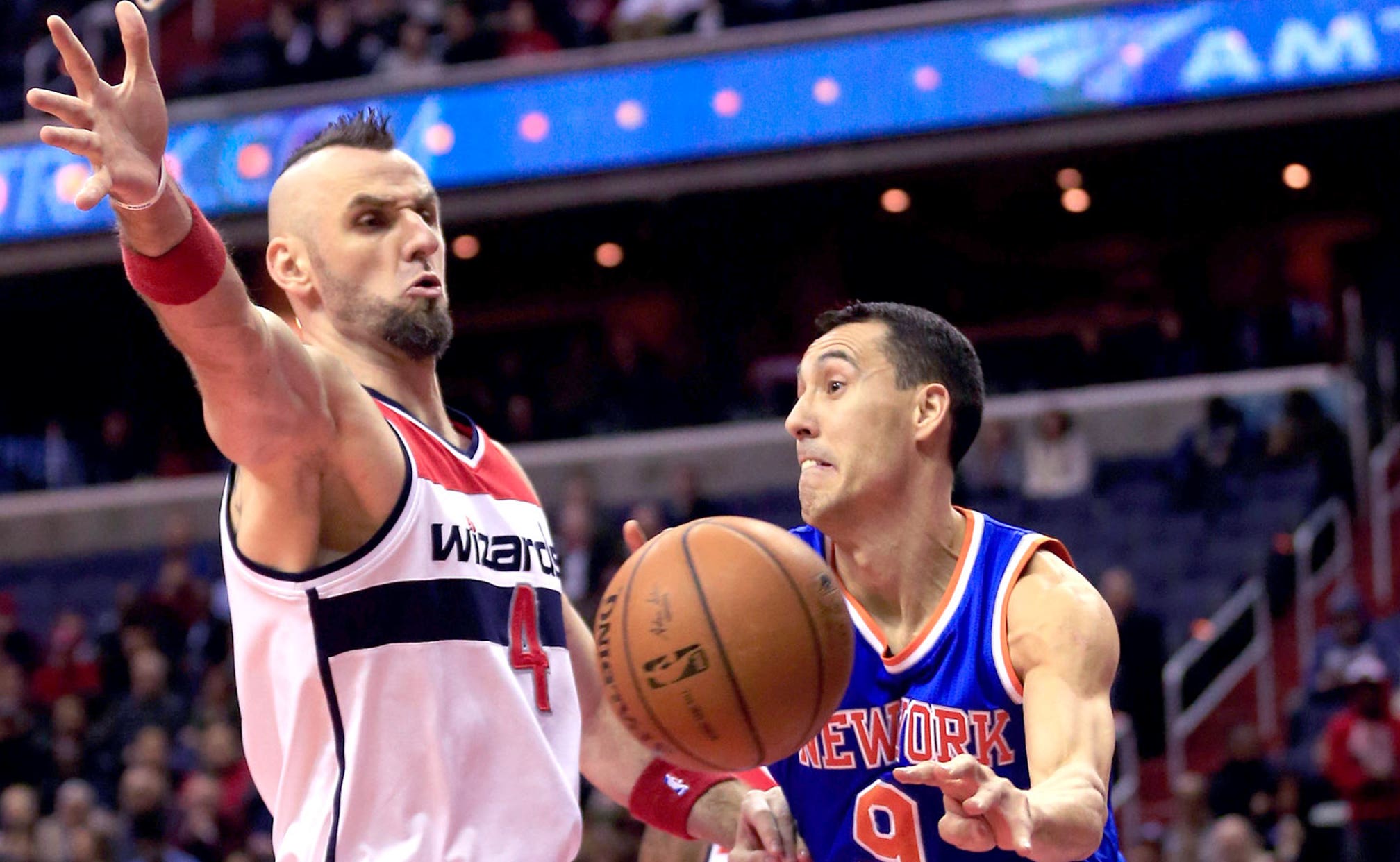 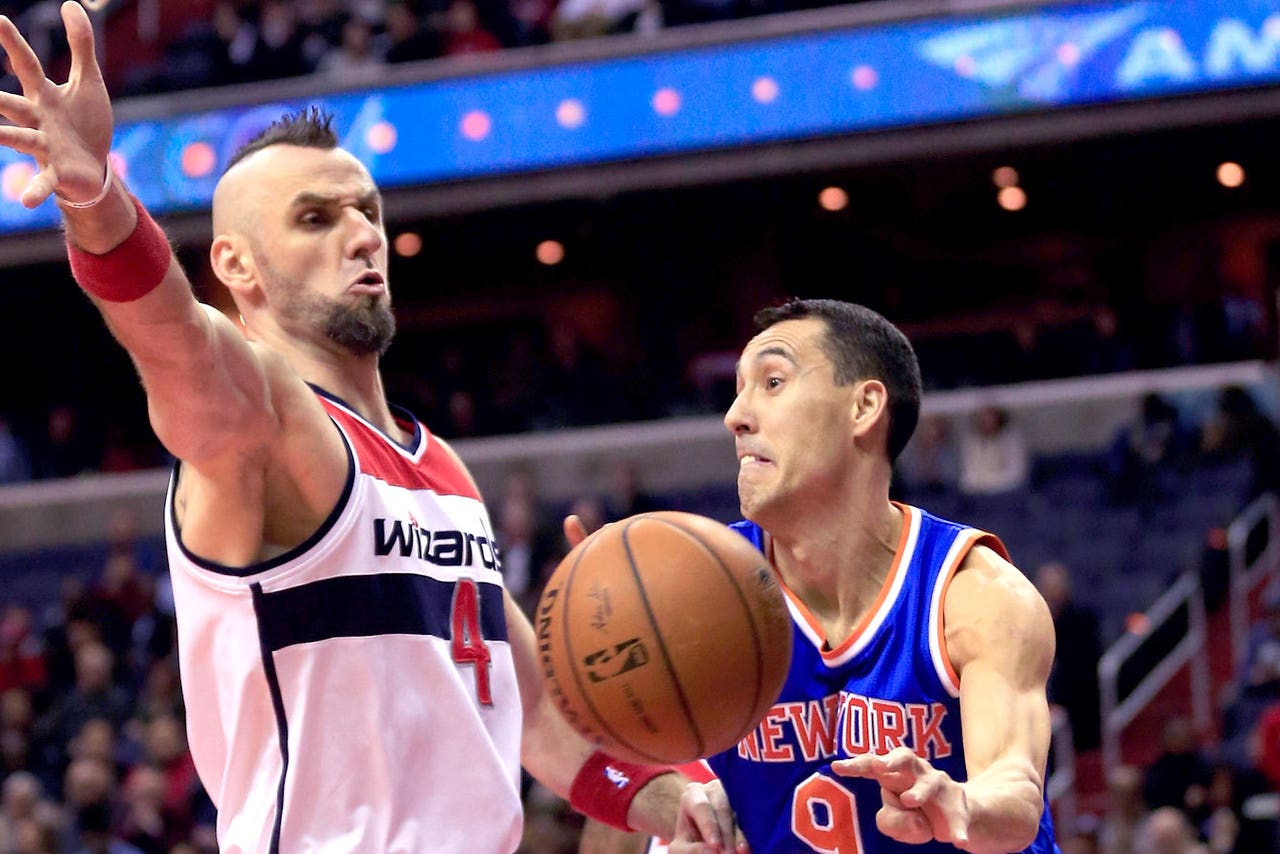 The Knicks fell 101-91 to the Washington Wizards on Wednesday, giving New York its longest in-season skid in the proud franchise's 69-year history.

With J.R. Smith and Iman Shumpert traded away, and with Carmelo Anthony (sore left knee) and Amare Stoudemire (sore right knee) injured, the Knicks made dubious history by giving major minutes to the likes of Cole Aldrich, Langston Galloway and Cleanthony Early. Their 23rd loss in 24 games featured all the now-familiar follies and a few new ones: passes that went nowhere, shots that became bricks, and Tim Hardaway Jr.'s bizarre decision to pass the ball away from the basket when he had a two-on-one fast break right in front of him.

''We can't get caught up in the history and record and number of games,'' first-year coach Derek Fisher said, ''and so we're coming out and trying to win one game, and we're supposed to celebrate because we broke a streak? No. That's not who we're going to be.''

The idea of celebrating was pretty much moot after Washington made a 9-0 run late in the first quarter. The Wizards never really put the Knicks away, but there was also never a sense that they were in danger of losing, and Rasual Butler's back-to-back baskets midway through the fourth quarter quieted any and all concerns after New York had cut the deficit to five.

John Wall had 18 points and eight assists for the Wizards, who avoided slipping in an obvious trap game after a tough five-game road trip.

''It's a situation if you sleepwalk through it, you can look bad, and we slept-walk after we got up 20,'' Washington coach Randy Wittman said. ''We just can't take things for granted.''

Jose Calderon scored 17 points for the Knicks, whose roster requires a flow chart these days just to keep up. Galloway, signed to a 10-day contract earlier in the day, played 18 minutes. Team president Phil Jackson is mostly concerned with clearing salary cap space for the future.

''It's not easy,'' Calderon said. ''All the things going on, in a season like that, all the changes happening to us - our teammates, they are going and new guys are arriving - and we've got so many injuries as well.''

Fisher said before the game he wasn't aware his team was on the verge of an infamous achievement.

''This franchise has been around long before I was even born, so we can't carry that much weight into a game like tonight,'' Fisher said. ''There's a lot of guys in this locker room that weren't alive barely 20 years ago, so it's just about our team and what it is that we're trying to do.

''We don't like our record, where it falls in franchise history. I guess it would be a reality possibly depending on how the night goes tonight, but that doesn't have to define us at all. That's what it is, that's what it would be and when things are going well for us, we're setting records the other way, that'll just be a part of this job and we'll keep moving forward.''

The Knicks lost 12 straight at the end of the 1984-85 season, won the draft lottery and came away with Patrick Ewing, then lost the first eight games of the 1985-86 season to complete a franchise-record 20-game skid -- a mark well within reach of this year's team.

Knicks: Fs Lou Amundson and Lance Thomas and C Alex Kirk - all received in the Smith-Shumpert trade - were waived, as expected.

Wizards: F Paul Pierce was given the night off ahead of a demanding upcoming set of games. Otto Porter started in Pierce's spot, and F Martell Webster (18 minutes) received his most extensive playing time since returning from back surgery. ... Swingman Glen Rice Jr. was waived. He played in only five games this season and was shipped to the D-League in late November.

How The West Was Won
The Los Angeles Lakers are headed back to the NBA Finals for the first time in 10 years. Here is how they did it.
3 hours ago

How To Erase A 3-1 Deficit
The Nuggets had been the comeback kings of the 2020 NBA playoffs. The Celtics can surpass them by following these 3 steps.
4 hours ago