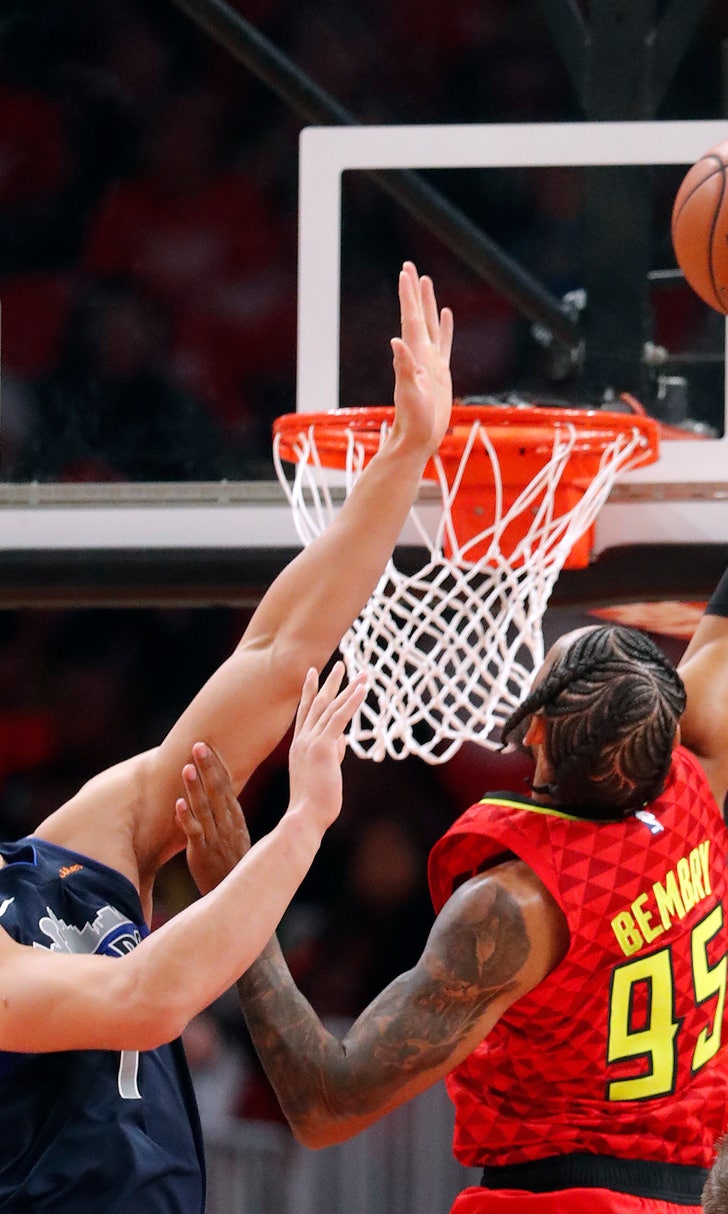 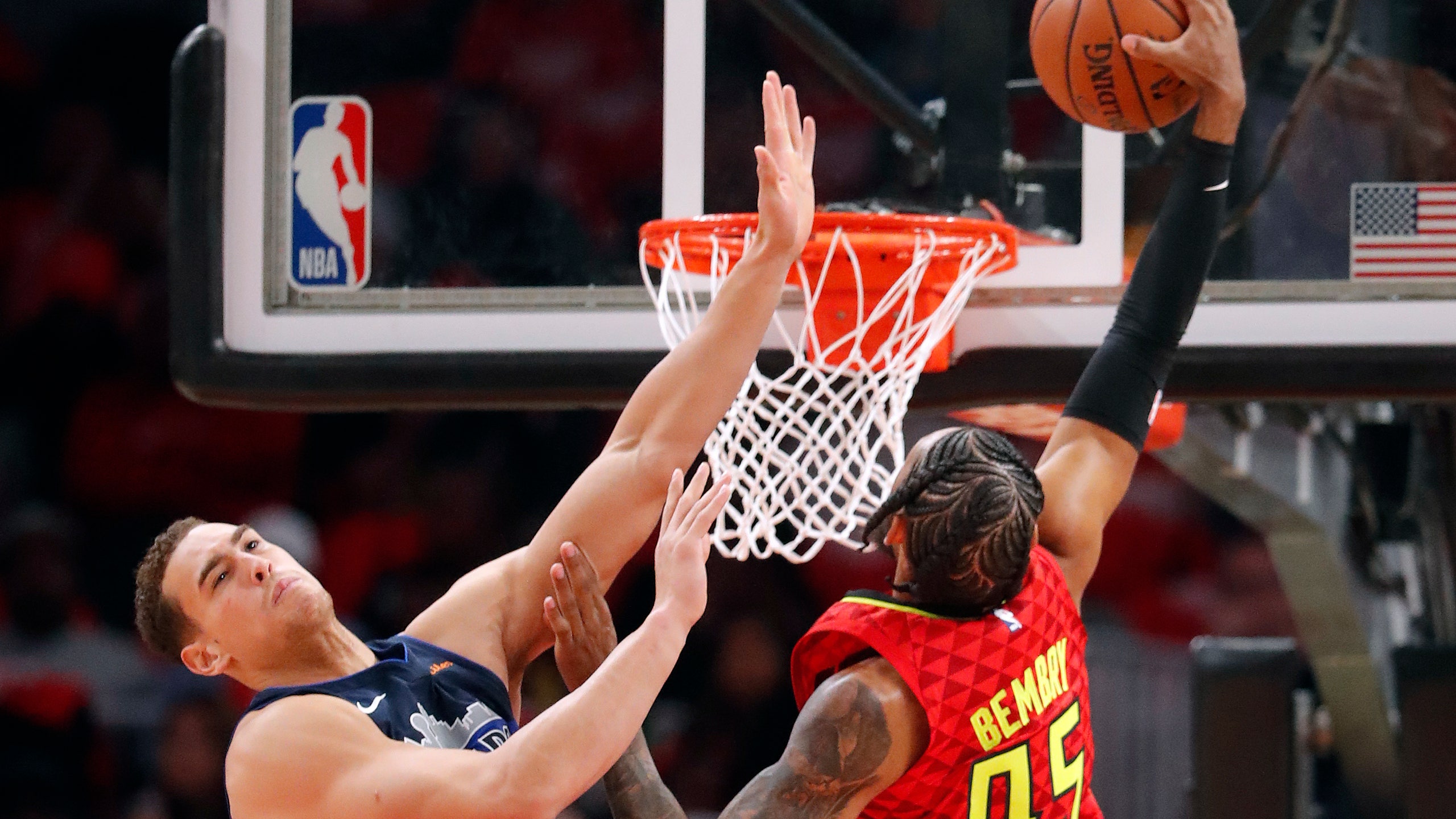 ATLANTA (AP) — Trae Young struggled through three forgettable quarters, hardly the sort of debut he was hoping for in Atlanta.

Then, with the game on the line, the rookie showed why the Hawks are counting on him to be the face of the franchise.

Kent Bazemore scored a career-high 32 points, Young bounced back in the final period and the youthful Hawks rallied from a 26-point deficit to stun the Dallas Mavericks 111-104 Wednesday night.

To show how much Young means to Atlanta in only his fourth NBA game, Taurean Prince pulled the rookie aside with about 4 minutes remaining and the outcome very much in doubt.

That's just what the Hawks did. Young scored 12 of his 17 points in the final quarter, spinning away from Dennis Smith Jr. with an electrifying move and getting to the line over and over again.

"That was some grown-man stuff right there," Bazemore said. "I'm proud of him for hanging in there."

Young emerged victorious in his rookie showdown with Luca Doncic, who finished with 21 points but hit only 3 of 10 shots over the final two quarters.

"Some people are going to say he scored more points than me, so that makes him better," Young said. "At the end of the day, I'm just glad my team won. That's the main thing for me."

The Hawks made it a night to remember at newly rechristened State Farm Arena, which hosted its first game after a $192.5 million renovation.

The crowd spent much of the first half enjoying the amenities, including a barber shop overlooking the court, but really got into the game as the home team kept creeping closer and closer.

"Thank you Atlanta," Young told the fans after the game. "This is just the beginning."

Coming off a 35-point, 11-assist performance in a victory at Cleveland, Young struggled with his shot, got into a bit of foul trouble and kept turning the ball over, helping Dallas race to a 51-25 lead only 4 minutes into the second quarter.

But the Hawks turned things around before halftime, closing to 58-48 at the break, and they finally passed the Mavs when Young was fouled on a 3-point attempt with 5:13 remaining. He swished all three free throws, putting Atlanta ahead for the first time all night, 96-95.

Bazemore finished with a flourish , spotting an opening down the middle of the lane and jamming it through with the left hand to make it 105-101 with 1:06 remaining.

"I haven't seen that since high school," Bazemore said with a grin. "It was like the Red Sea parting."

The Mavericks equaled the third-biggest blown lead in franchise history.

"We took our foot off the gas," Wesley Matthews said. "We thought it was going to be an easy game. Credit them. They didn't quit."

Young and Doncic are likely to be compared for the rest of their careers.

The Hawks selected the 19-year-old Slovenian with the No. 3 overall pick, only to deal him to the Mavericks in exchange for Young, who was taken at No. 5.

Atlanta also picked up 2019 first-round selection in the deal.

Dewayne Dedmon made his season debut for the Hawks after missing the first three games recovering from left ankle injury.

Mavericks: Coach Rick Carlisle was asked before the game how his team could improve its defense against the 3-pointer. "Get closer to them," he quipped. Dallas took his jab to heart, limiting the Hawks to 39.5 percent on 15-of-38 shooting beyond the arc. Coming into the game, the Mavericks were giving up nearly 55 percent from 3-point range. ... Matthews led the way with 23 points, while Smith chipped in with 16.

Hawks: Prince had 24 points, connecting on 5 of 9 from 3-point range. ... DeAndre' Bembry grabbed 16 rebounds in just 29 minutes of playing time, easily the best of his career. His previous high for rebounds was seven. ... F Alex Poythress left the game in the first half with an injured knee and did not return. He'll undergo an MRI on Thursday.

Mavericks: Travel to Toronto on Friday to take on the Raptors.

Hawks: Host Chicago on Saturday before going back on the road for two games.