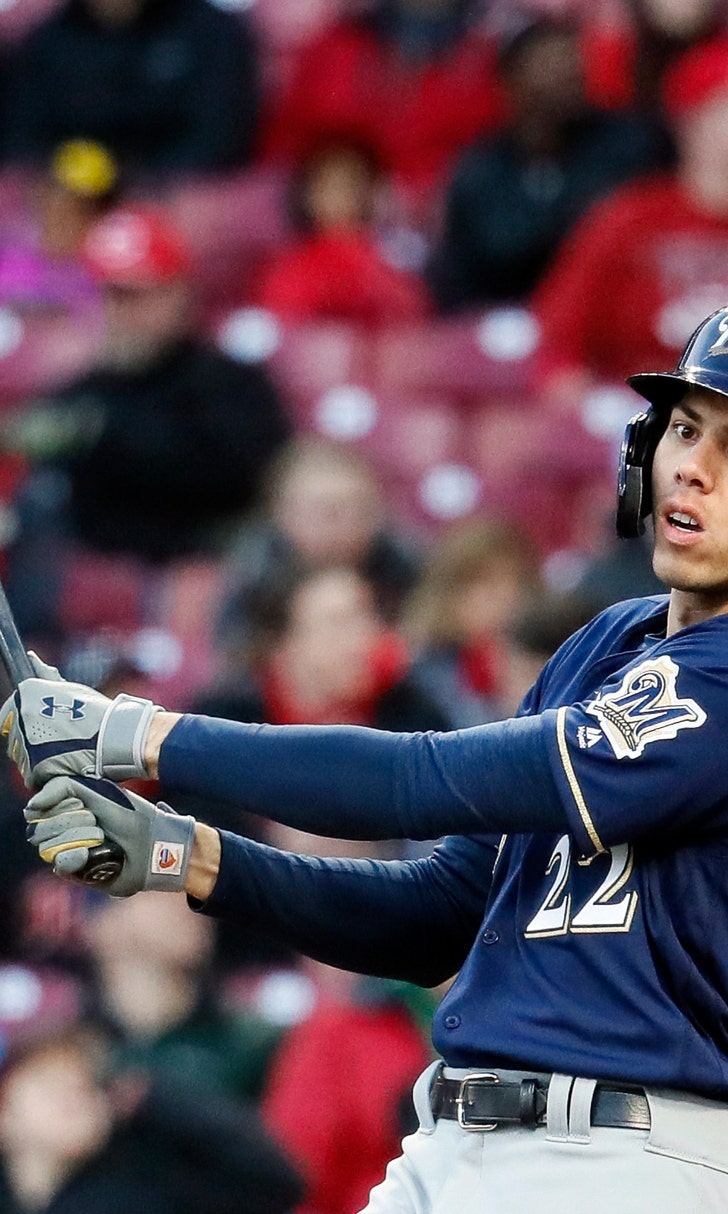 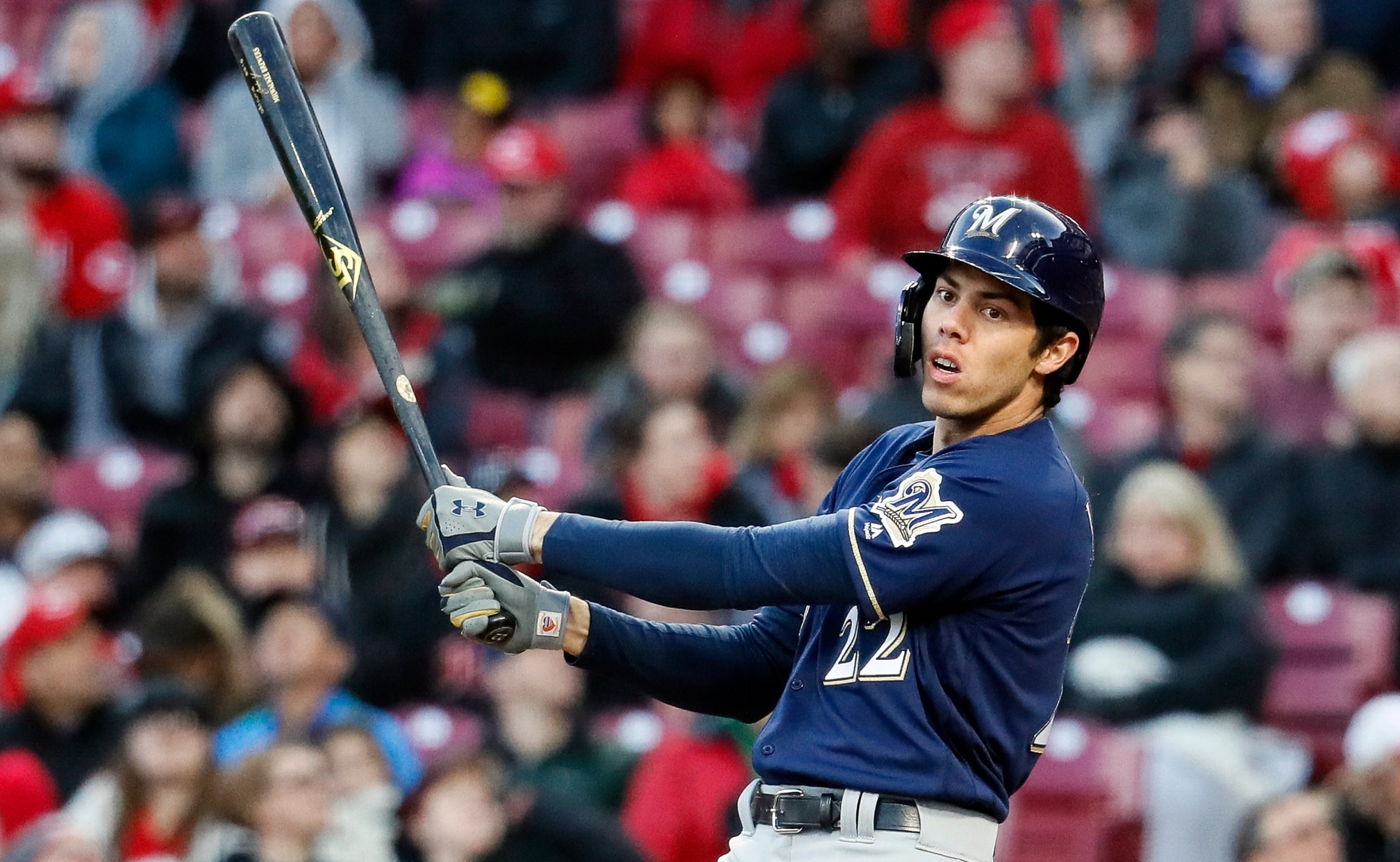 CINCINNATI (AP) — Christian Yelich was held without a homer for the first time this season, but the Cincinnati Reds couldn't get him out with the game on the line.

Yelich doubled in the ninth inning and scored the tiebreaking run Monday night, rallying the Milwaukee Brewers to a 4-3 victory in front of the smallest crowd in Great American Ball Park history.

He doubled with two outs off Raisel Iglesias (0-1) and came around on Ryan Braun's second double of the game.

"It doesn't have to be a homer," Brewers starter Zach Davies said. "He's clutch. He comes up in the big moments and nobody worries. He's got a great approach, and everything is going right right now."

Alex Wilson (1-0) allowed one hit over 1 2/3 innings. Josh Hader gave up a double in the ninth before getting his third save in three chances.

Players wore facemasks in 40-degree temperatures. The announced crowd of 7,799 was the smallest in the ballpark's history, coming a season after Cincinnati had its worst home attendance since 1984.

It was quite a change for the defending NL Central champs, who took three of four from the rival Cardinals at Miller Park before playing in the cold in front of a small crowd.

"It was different, for sure," manager Craig Counsell said. "But look, that's major league baseball. You've got to perform in different scenarios and circumstances. You've just got to get through it and gut through it and it's nice to do it with a win."

Tanner Roark gave up three runs in the first inning and lasted 4 1/3 innings in his debut with the Reds, who got him from the Nationals as part of their offseason overhaul of the rotation. Milwaukee sent nine batters to the plate in the top of the first, which lasted 20 minutes. Jesus Aguilar's two-run single highlighted the rally.

"I was just all over the place," said Roark, who needed 34 pitches to get through the inning. "I wasn't throwing strikes. I was falling behind and had to throw fastballs."

Yasiel Puig got his first hit with the Reds — and the first by a Cincinnati outfielder — to end a streak of 14 scoreless innings. His two-run double in the fifth off Davies cut it to 3-2. Davies gave up four hits in five innings.

Derek Dietrich grounded into a run-producing force-out that tied it in the sixth.

Reds: Right-hander Hunter Greene, the second overall pick in 2017, had a setback while throwing last week and will need Tommy John surgery. Greene didn't pitch after July 26 last season because of a sprained ligament in the elbow. He was cleared to throw over the winter. Dick Williams, the president of baseball operations, said MRIs found new damage to the ligament.

The Brewers ended a streak of 22 straight games with a homer at GABP since Sept. 13, 2016, the longest homer streak by any team at the ballpark.

Yelich batted .482 against the Reds last season with seven homers and 17 RBIs. He hit for the cycle twice against Cincinnati.

Reds left fielder Matt Kemp was ejected after he questioned a called third strike in the fifth inning and continued yelling at plate umpire Jeff Nelson. He's 0 for 7 this season with three strikeouts.

OUTS IN THE OUTFIELD

Reds outfielders Jesse Winker, Scott Schebler, Puig and Kemp are a combined 1 for 34 with 13 strikeouts.

Davies was upset when Derek Dietrich extended his right elbow toward the strike zone and was brushed by one of his pitches. Dietrich was hit by pitches 93 times during his six seasons with the Marlins, setting a club record.

"When you stick your elbow out and you're trying to get hit, it's kind of bush league baseball, I guess," Davies said.

Yasmani Grandal beat a four-man outfield alignment for his first hit with the Brewers, a single down the line in right. Reds manager David Bell moved second baseman Jose Peraza to left field and shifted the rest of the outfielders toward right.

Brewers: Jhoulys Chacin (1-0) allowed three runs in 5 1/3 innings of the Brewers' opening win over St. Louis. He's 0-2 with a 4.22 ERA in five starts and one relief appearance at Great American Ball Park.

Reds: Anthony DeSclafani makes his season debut. He missed the first two months last season with a strained oblique but led the rotation with seven wins. He was 0-1 in three starts against Milwaukee with a 6.00 ERA last season. 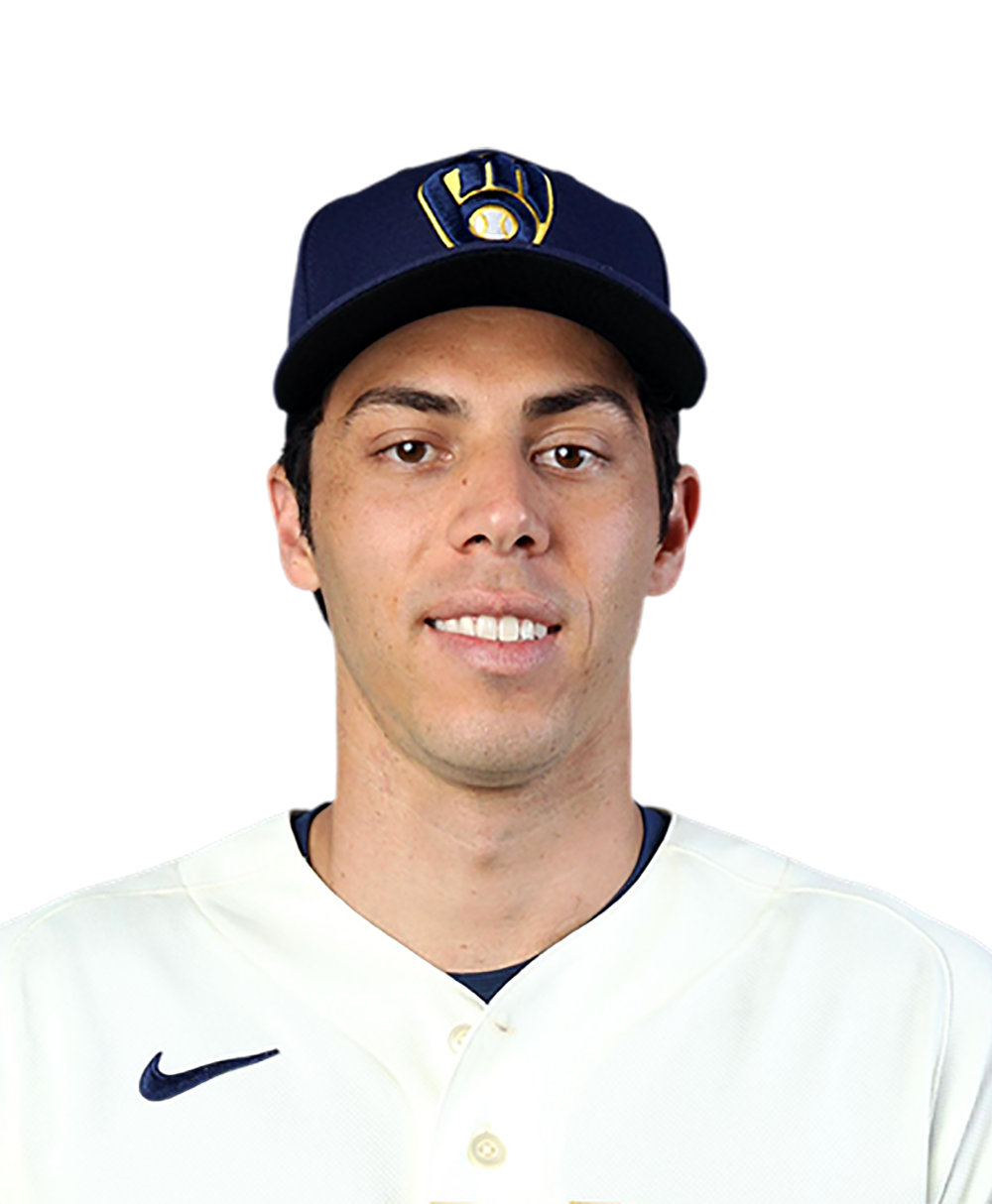