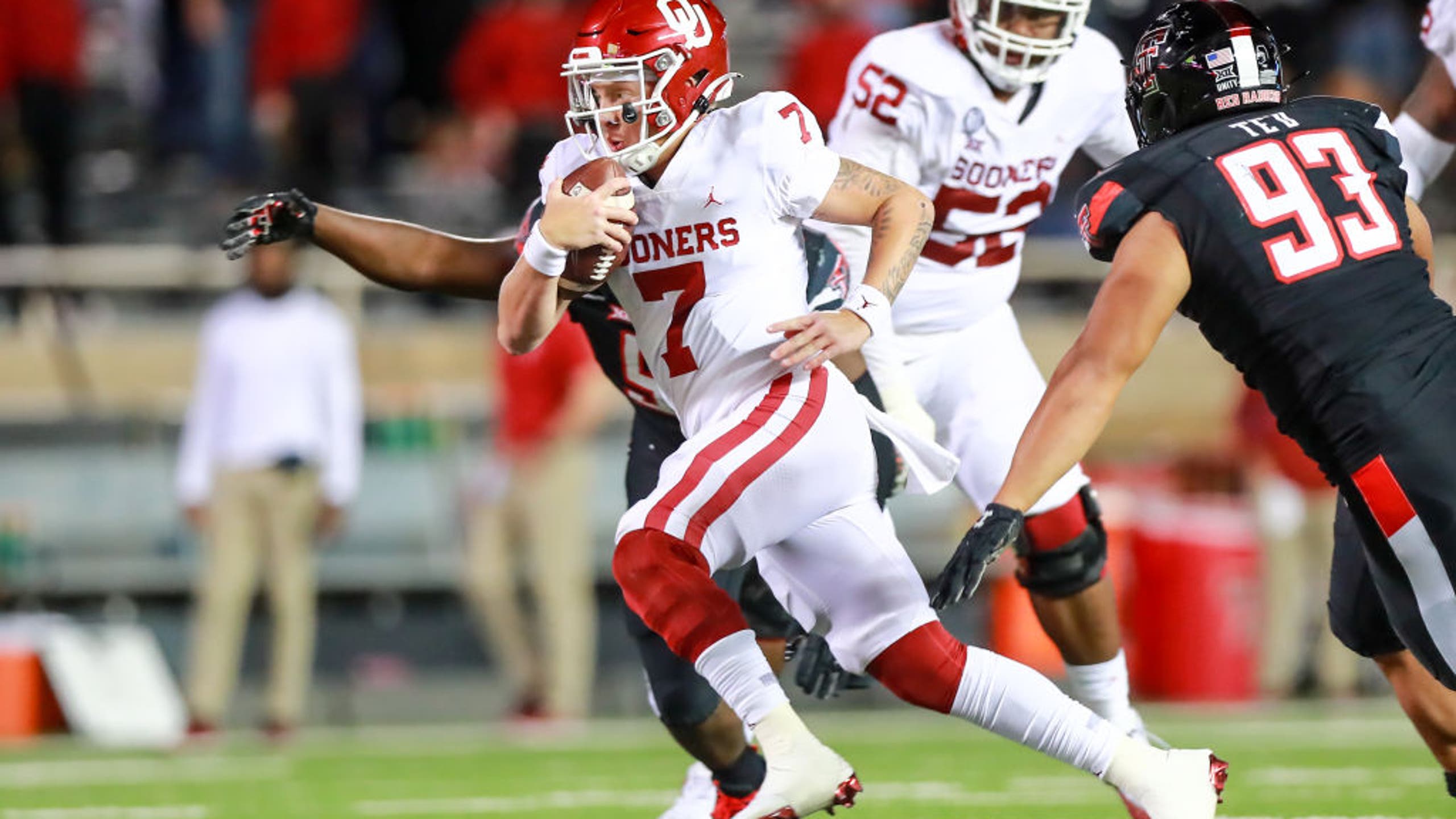 At this point in 2020, few experts would have pegged Alabama's DeVonta Smith as a Heisman Trophy contender.

Smith not only dominated the regular season in becoming the first receiver to win college football's top award since 1991, but he also owned the two games in the College Football Playoff as he led the Tide to its 18th national title.

As we look toward the 2021 Heisman race, here are the 10 candidates who enter the year as favorites for the trophy (with all odds via FOX Bet).

Perhaps one of these 10 can follow Smith's footsteps as both a Heisman winner and a national champ: 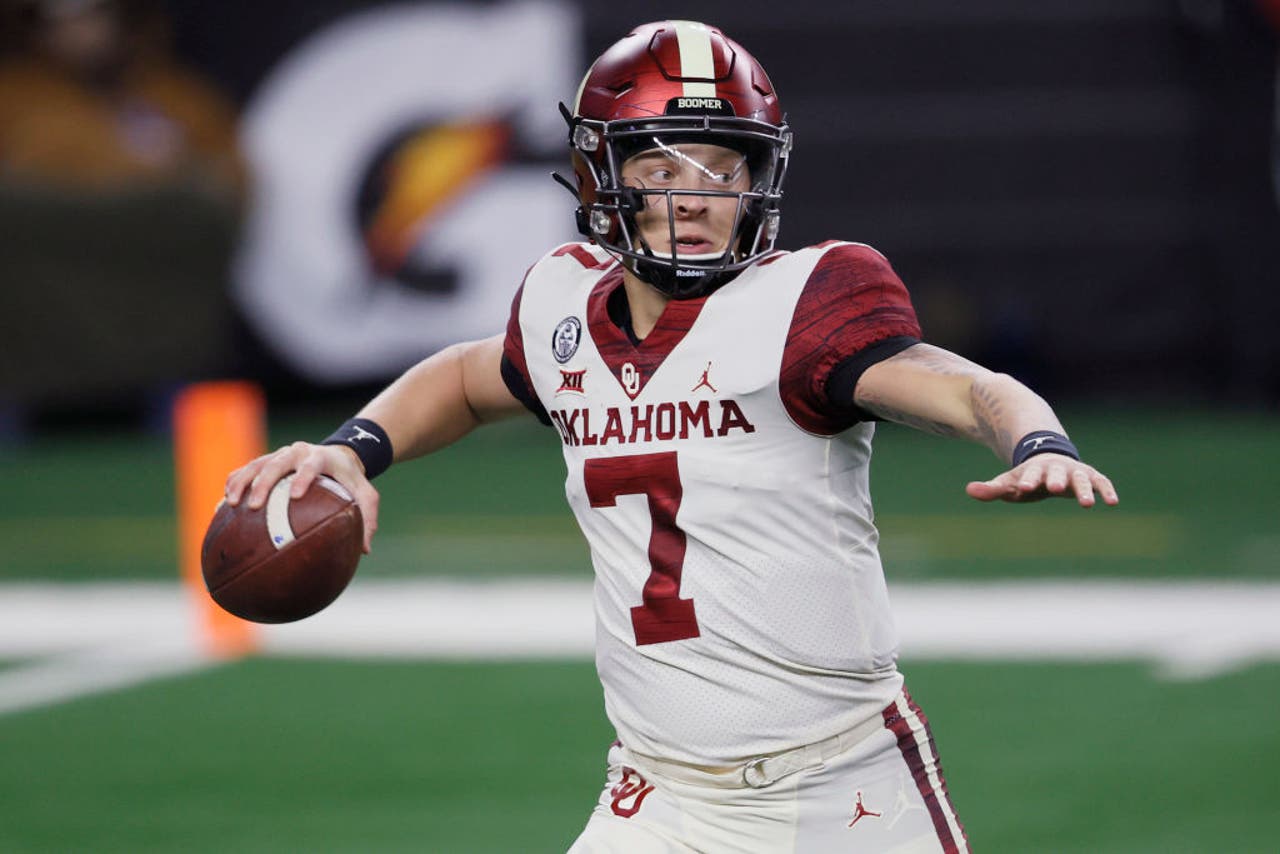 Rattler became the first Sooners quarterback since Sam Bradford (2007) to earn selection to the Football Writers Association of America’s Freshman All-America Team. Following the ‘07 season, Bradford led the Sooners to the national title game and won the Heisman.

Rattler’s top pass-catcher, Marvin Mims, became the first receiver in OU history to be selected as a FWAA Frosh All-American and set a school record for touchdown receptions in a season by a freshman, with nine.

With the core of the 2020 offense mostly intact, you can see why Rattler has the best odds to win the Heisman in the upcoming season, and the Sooners are a decent bet to compete for the national title. 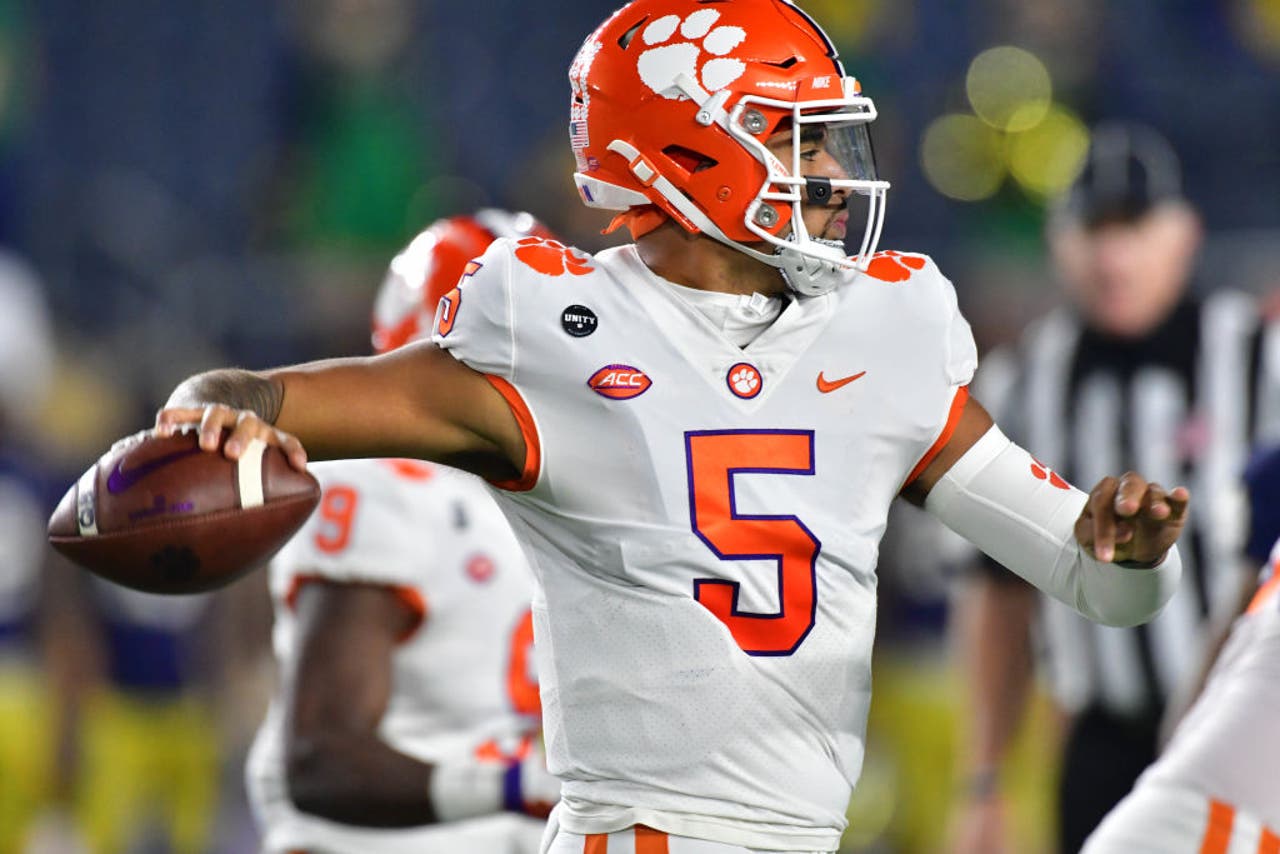 After leading Clemson to a comeback victory against Boston College in an emergency start, Uiagalelei followed that performance with the best display by a true freshman QB that the sport has seen since Trevor Lawrence led the Tigers to the 2018 national championship.

Uiagalelei passed for 439 yards with two touchdowns against No. 4 Notre Dame in a double-overtime loss to the Irish. He supplanted himself as the heir apparent Lawrence, and top wide receiver Justyn Ross is on track to rejoin the team after missing the 2020 season for surgery to his neck and spine.

If Uiagalelei can get help from Ross and beat what is likely to be a top-10 opponent in Georgia on Sept. 4 in Charlotte, North Carolina, it’s easy to envision him at the Heisman ceremony in December. 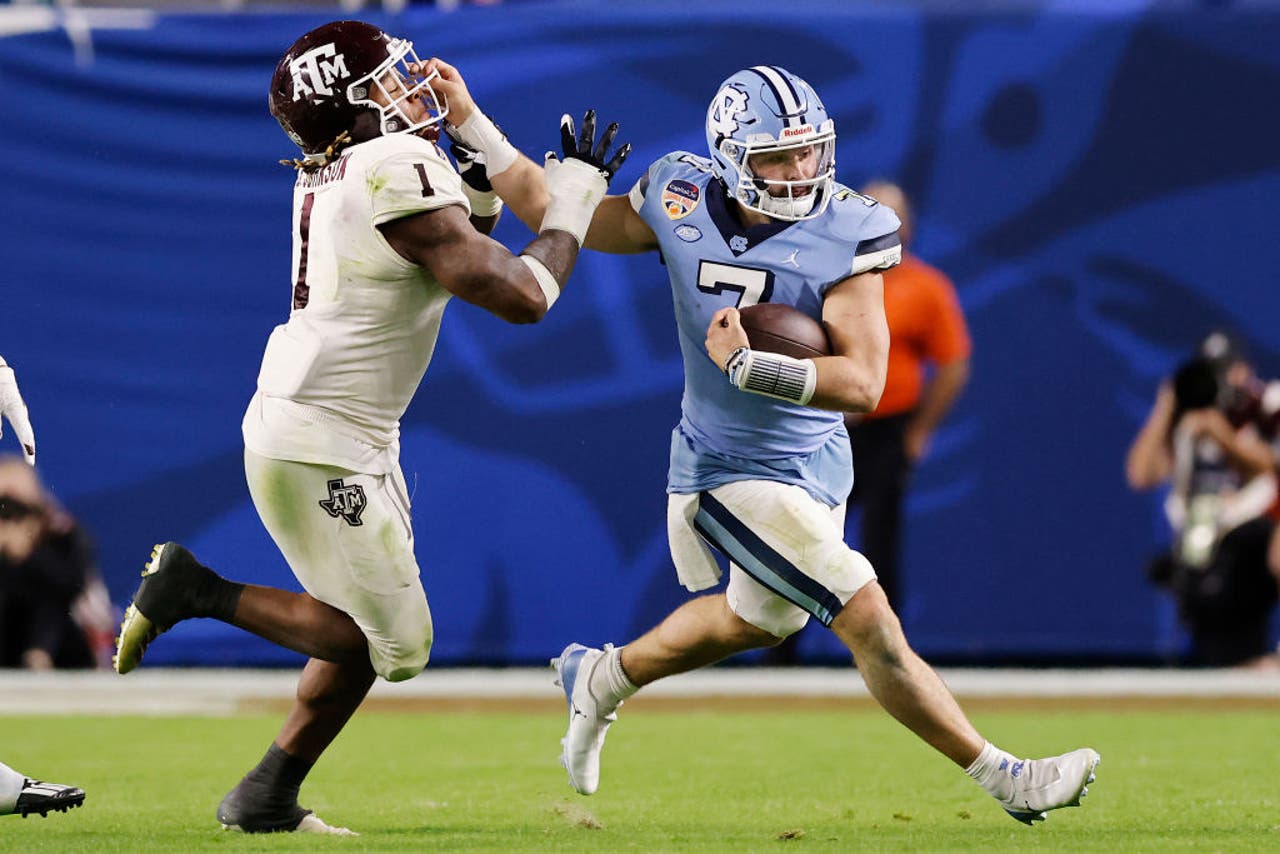 Since flipping his commitment from Florida State to UNC, Howell has been flipping through the ACC and into the conversation as one of the best players in the country heading into the offseason.

After a record-breaking true freshman season, Howell followed by improving his completion percentage (from 61.4 to 68.1) and his yards per pass attempt (from 8.6 to 10.3).

In the Tar Heels' 59-53 victory over Wake Forest, he passed for 550 yards and six TDs while completing 71.1 percent of his passes with just one interception. However, with the loss of the best backfield tandem in the country, as well as a couple of the best receivers in the conference, North Carolina was nowhere near as potent offensively against No. 5 Texas A&M in the Orange Bowl.

In 2021, Howell will have to carry the Heels in ways he has not previously had to if the team is to reach the conference title game. If he does, he’ll stick around in the Heisman conversation. 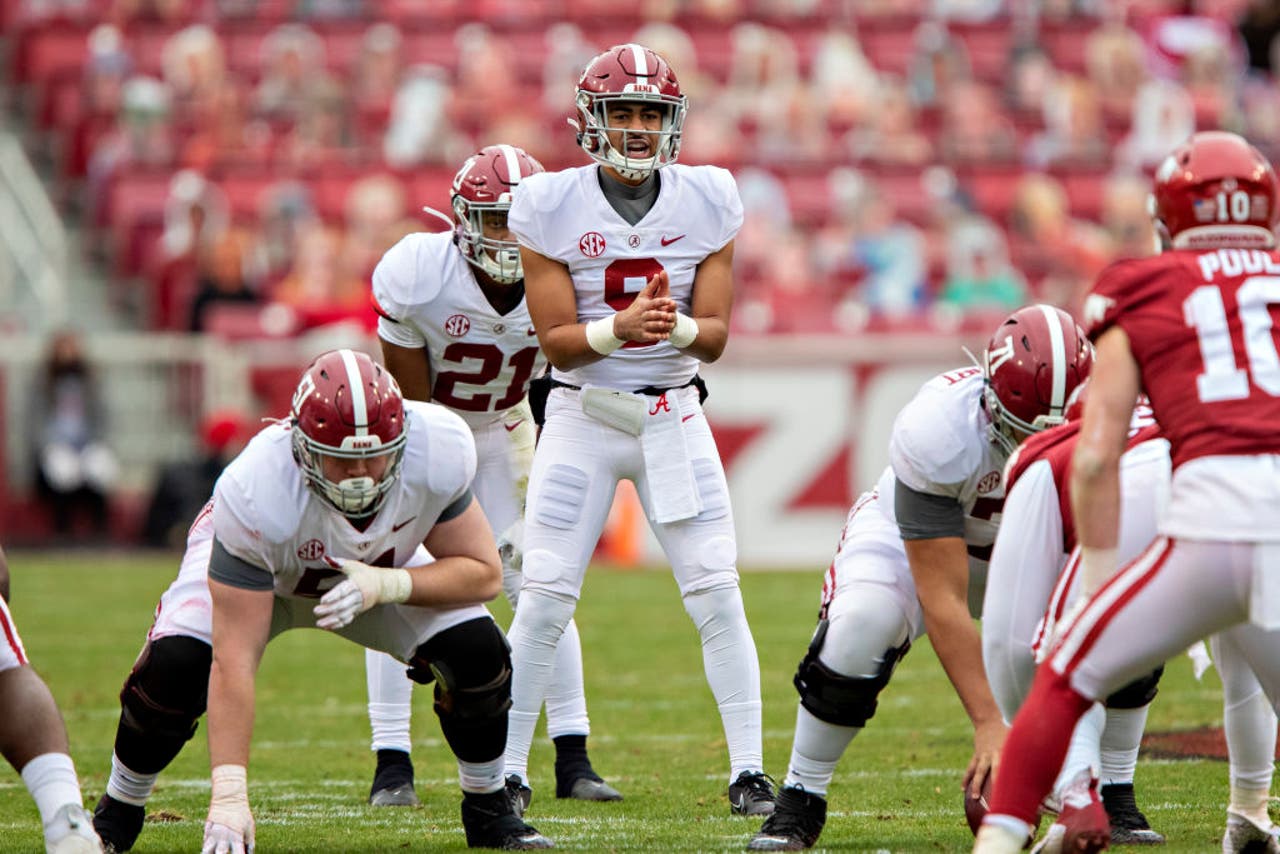 This is a bet on pedigree as well as program.

Young sat behind Mac Jones as the junior QB led Alabama to the 2020 national title while setting the single-season passer efficiency rating record. In nine games, Young tossed just 22 passes, completing 13 of them.

But with Jones declaring for the 2021 NFL draft, Young is the man now. He is at Alabama because he is perhaps the most talented player the Tide have ever signed at the position. His rating (0.9994), according to 247 Sports Composite, is higher than Julio Jones’ (0.9992) and tied for the best in the recruit ranking era.

At Mater Dei High School, Young passed for more than 13,000 yards and 152 TDs. With the amount of talent stepping into roles vacated by receivers Jaylen Waddle and Smith and running back Najee Harris, Young will have everything he needs to help Alabama defend its crown. 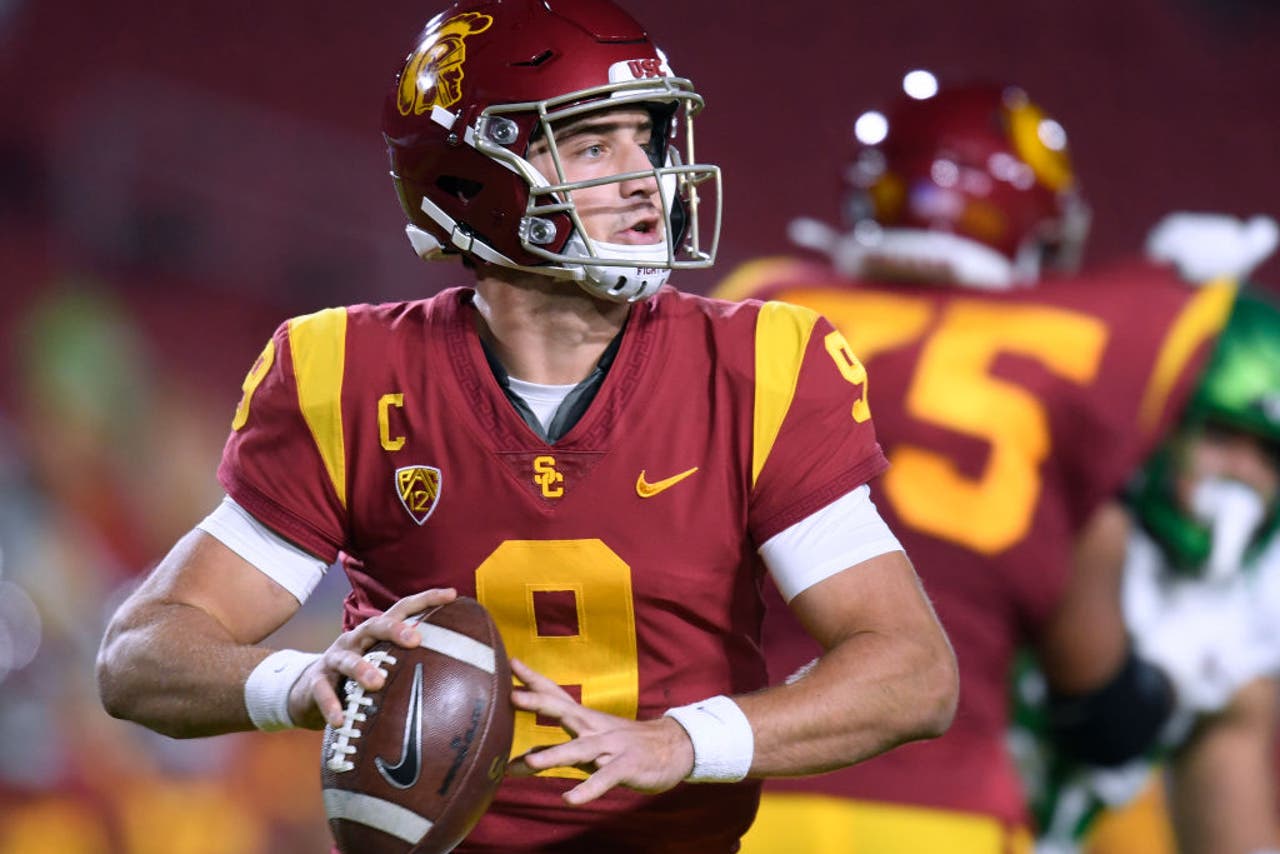 In just six games, Slovis passed for more than 1,700 yards and 17 TDs with seven interceptions. He also threw for at least 320 yards in four of those games.

Slovis led USC to its first conference championship game appearance since 2017 and its first 5-0 start since 2006. However, the Trojans fell in the Pac-12 title game to (non-division winner) Oregon.

With top pass-catcher Drake London returning, Slovis and the Trojans face their first test on Sept. 4 against a San Jose State team that finished 2020 with just one loss.

The Trojans also play at Notre Dame on Oct. 23 in a game that could have Heisman and CFP implications. 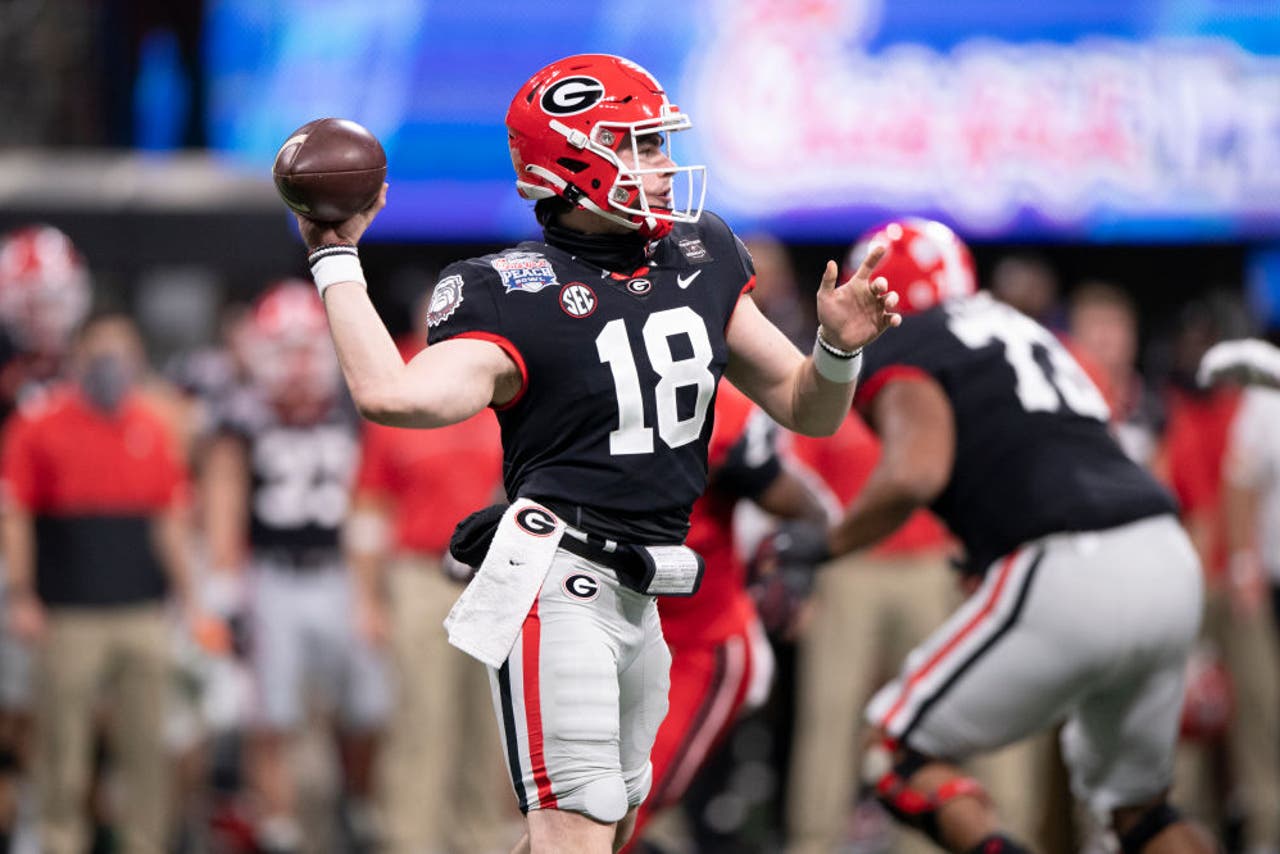 Daniels didn’t play for the first six games of Georgia’s 2020 season, but when he was finally inserted into the lineup, he showed out. In his first start in Athens, he completed 28 of 38 pass attempts for 401 yards with four TDs.

He solidified himself as the starter with an outstanding 299-yard passing performance against No. 25 Missouri and 392 yards in UGA’s Peach Bowl victory over No. 8 Cincinnati.

He returns all three of his top pass-catchers, and he’ll likely get wideout Dominick Blaylock back, too, for what should be a run at the SEC title. 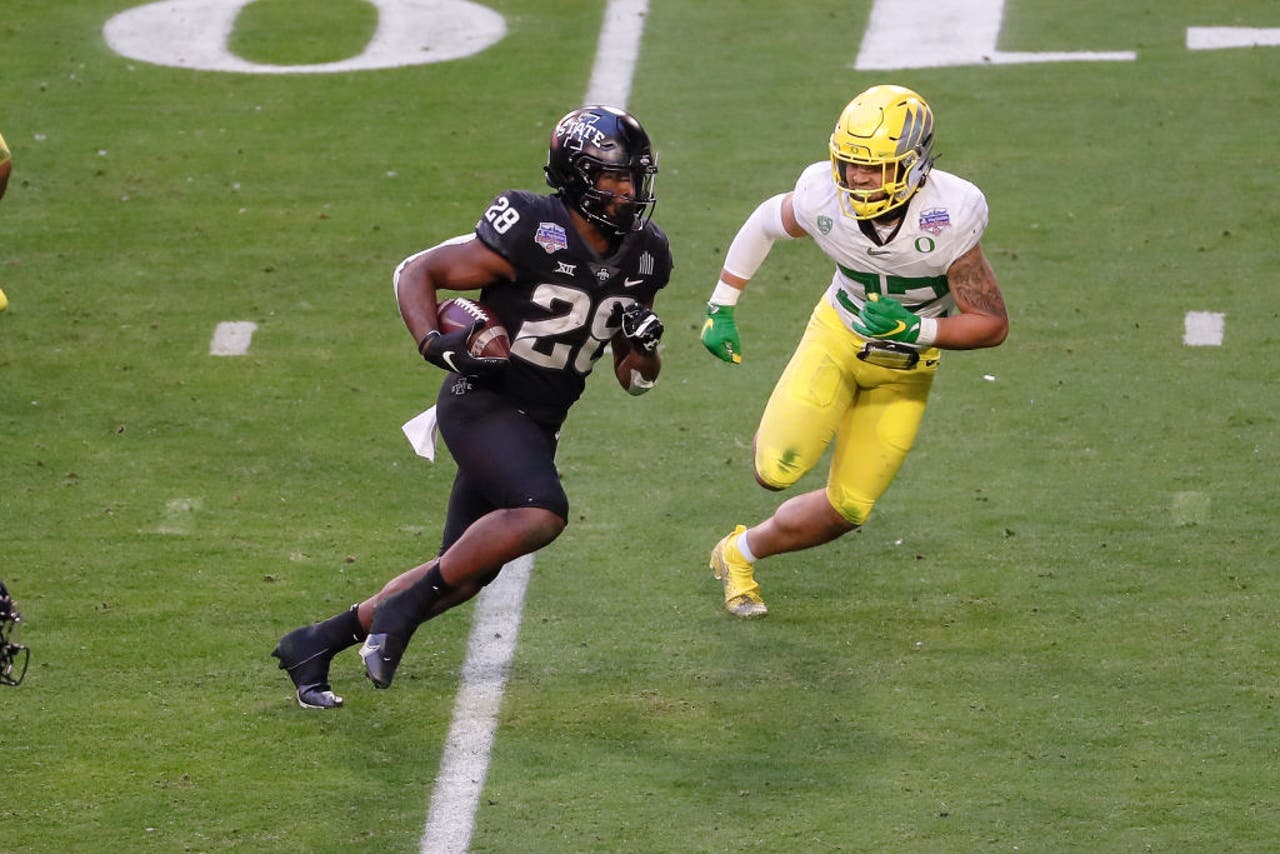 Hall became the first unanimous All-American in Iowa State history, and all he had to do to earn that honor was lead the nation in rushing (1,572 yards) and lead the Cyclones to the 2020 Big 12 title game and the first major bowl victory in program history.

Hall is on the short list of the best tailbacks in college football, and he could put some distance between himself and the rest with another dominant season in 2021. 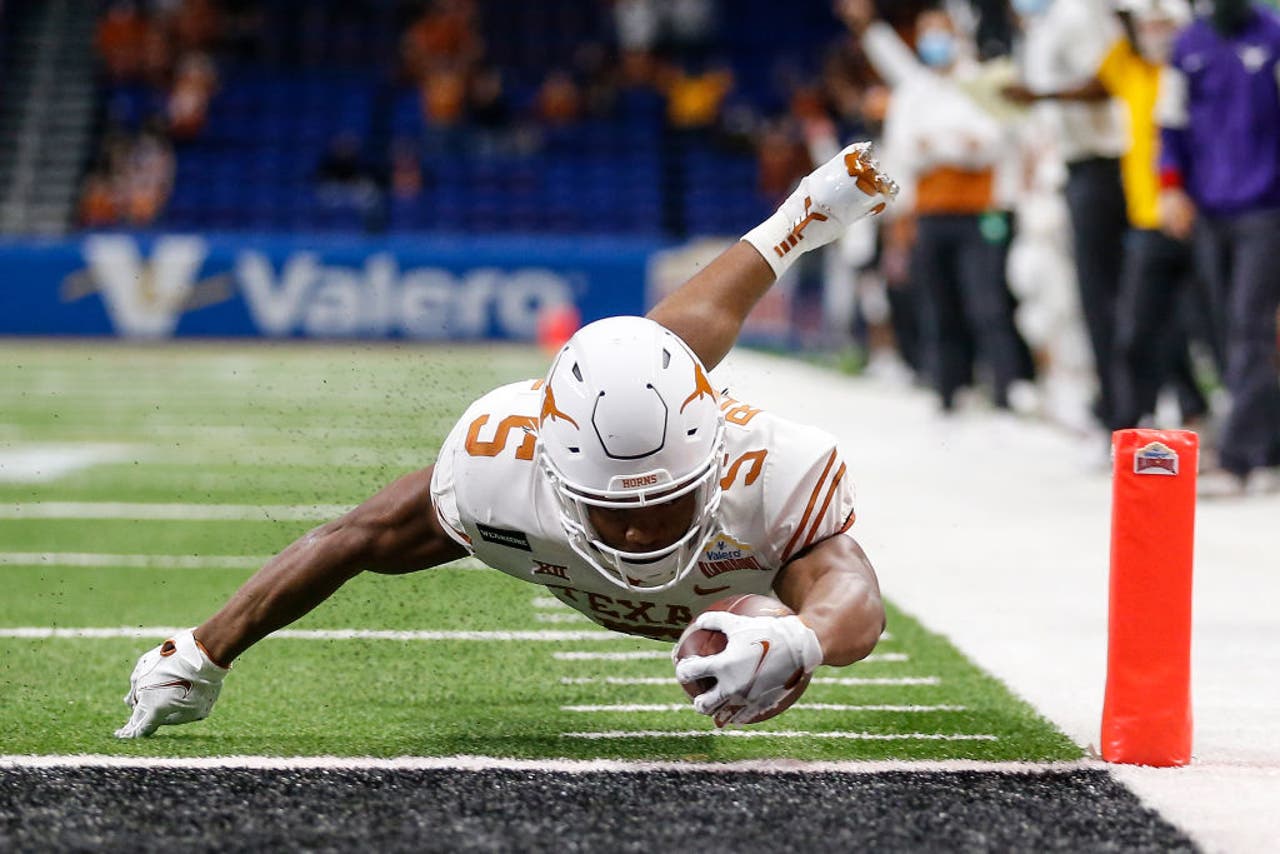 Robinson carried the ball just 14 times in the first three games of the 2020 season at Texas. After receiving a steady diet of double-digit carries in the following two contests, he enjoyed a breakout game against West Virginia, with 113 yards on just 12 carries.

In the final two games of the season, he rushed for 355 yards on 19 carries against Kansas State and Colorado, respectively, giving him 703 yards on 86 rushes (8.2 yards per rush). With former Alabama offensive coordinator Steve Sarkisian now running the show in Austin, Robinson might see the kind of production Harris did as the lead back at Alabama.

A victory over rival Oklahoma and a Big 12 Championship might lead to Robinson holding the stiff-armed trophy. 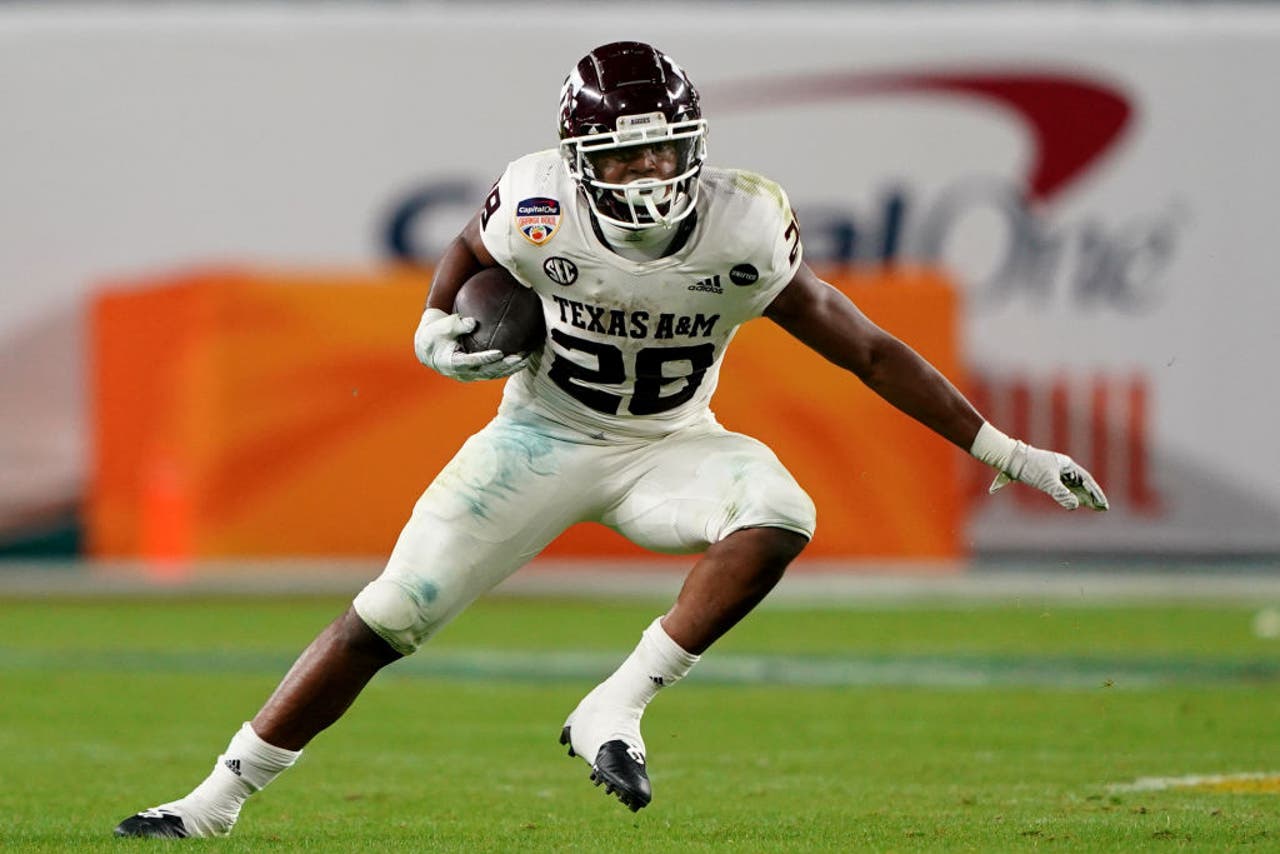 With quarterback Kellen Mond headed to the NFL, Spiller is going to be the focal point of Jimbo Fisher’s offense. That will make the incoming junior the most important returning skill player on what is projected to be the most talented Texas A&M squad Fisher has put on Kyle Field.

After rushing for 946 yards as a freshman, Spiller surpassed the 1,000-yard mark as a sophomore. He boasts a career 5.5 yard per rush average and will likely carry the ball more than 200 times as a junior. How he performs against a loaded SEC West will decide where he ends up in the conversation about college football’s most outstanding player. 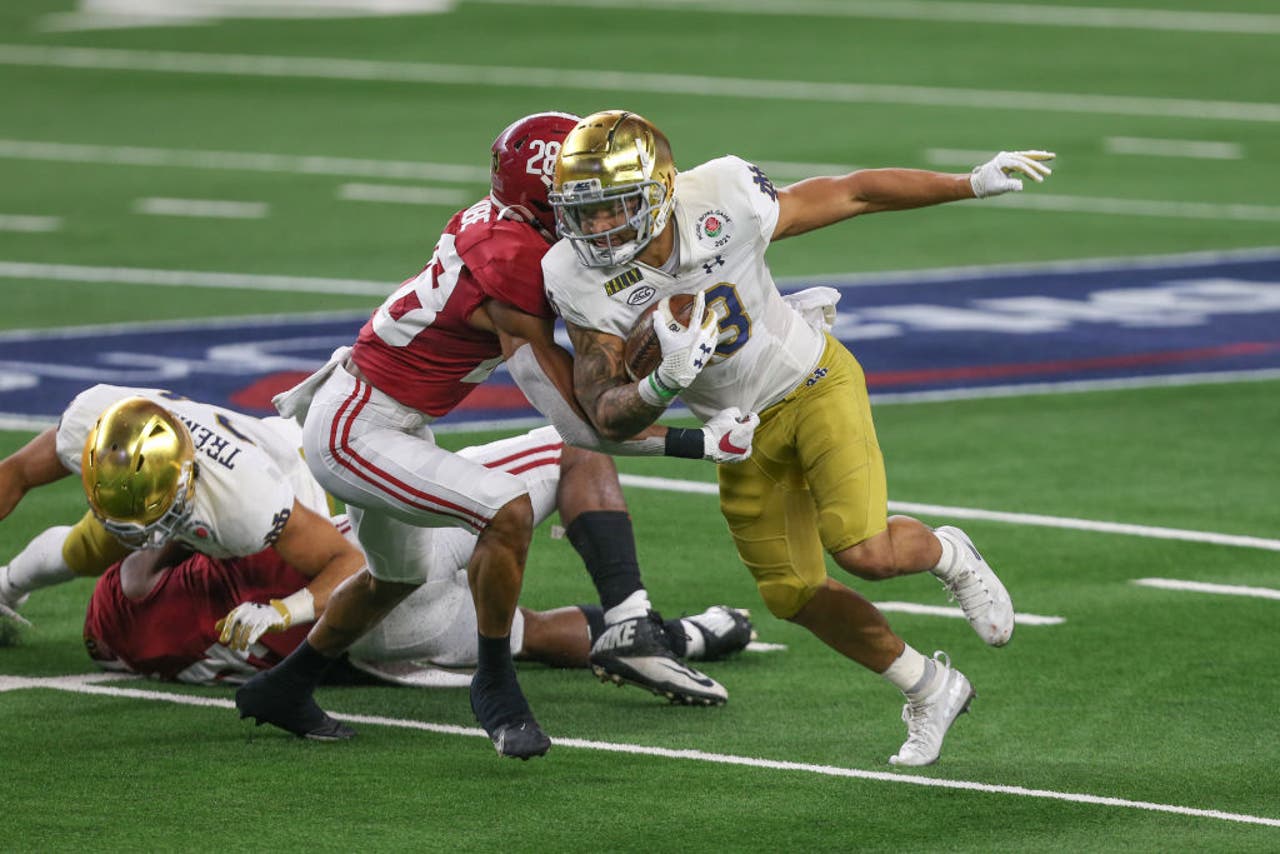 Like Spiller and Robinson, Williams is likely to see more carries with an unproven starting quarterback standing in front of him in South Bend.

As a freshman, Williams was a workhorse back for Irish coach Brian Kelly. Williams carried the ball at least 10 times in all but one game for ND, but he was an every-down back because of his brilliant pass-blocking. 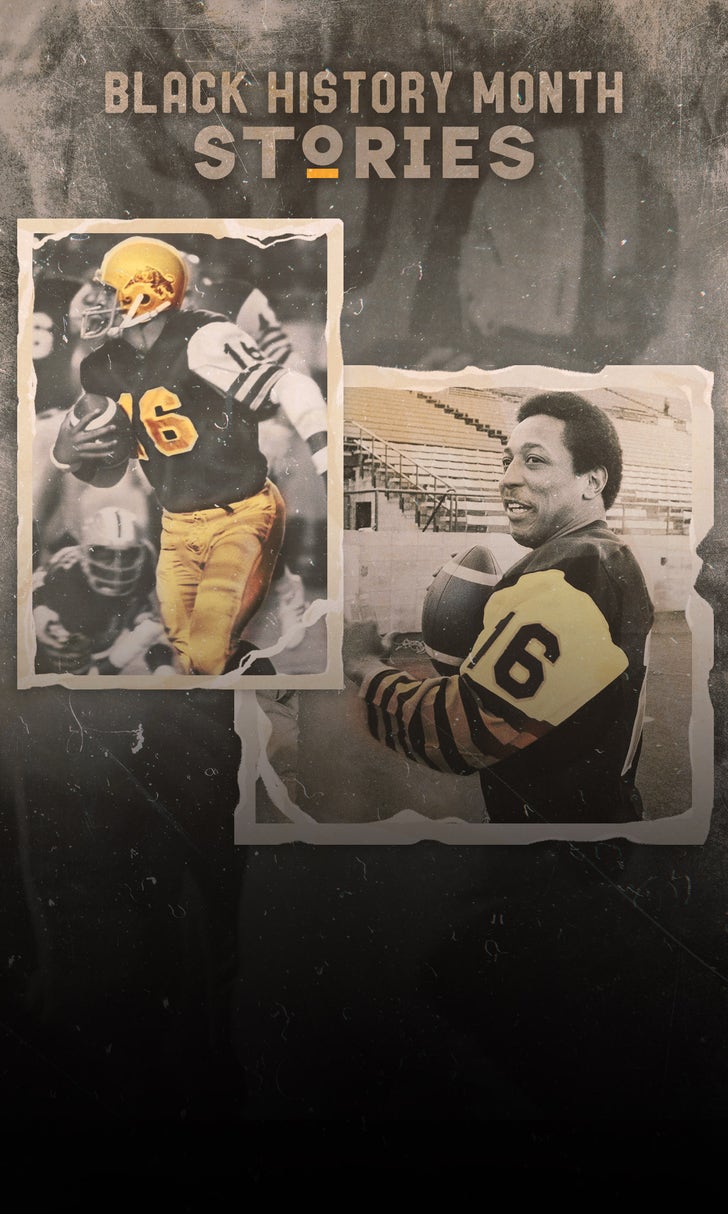 Still Overlooked
Chuck Ealey, one of the most accomplished and winningest QBs ever, deserves to be in the College Football Hall of Fame, RJ Young writes.
3 days ago
those were the latest stories
Want to see more?
View All Stories
Fox Sports™ and © 2021 Fox Media LLC and Fox Sports Interactive Media, LLC. All rights reserved. Use of this website (including any and all parts and components) constitutes your acceptance of these Terms of Use and Updated Privacy Policy. Advertising Choices. Do Not Sell my Personal Info