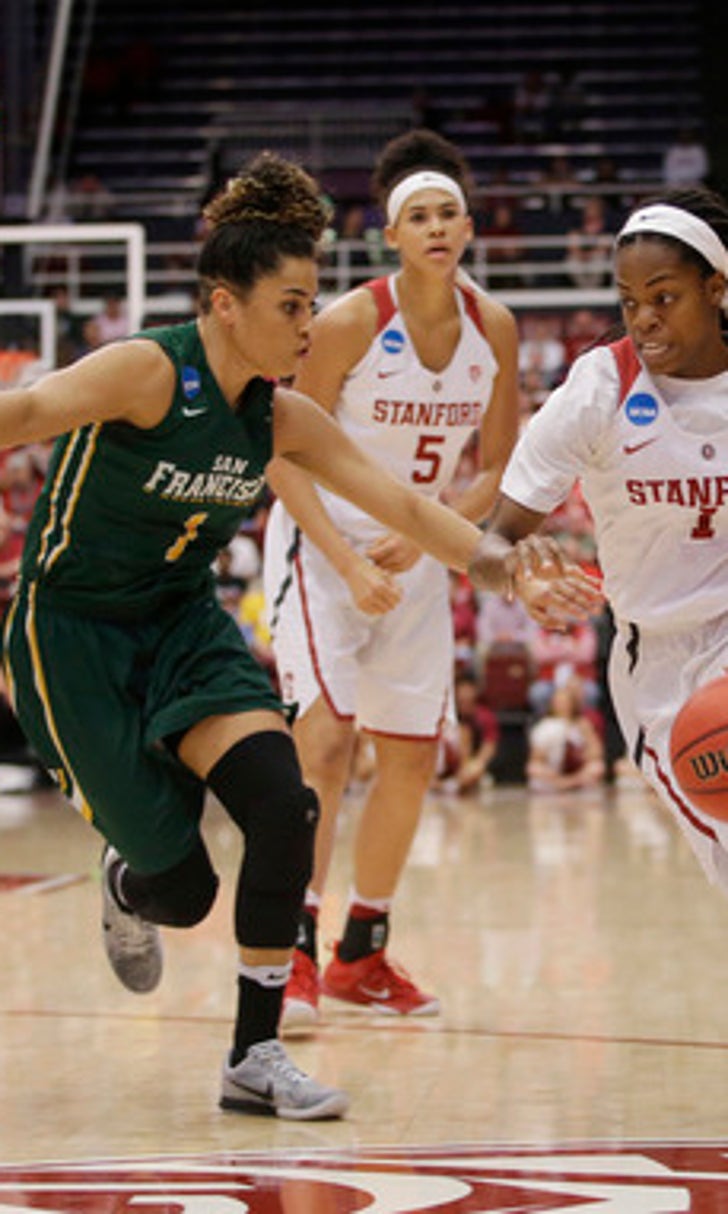 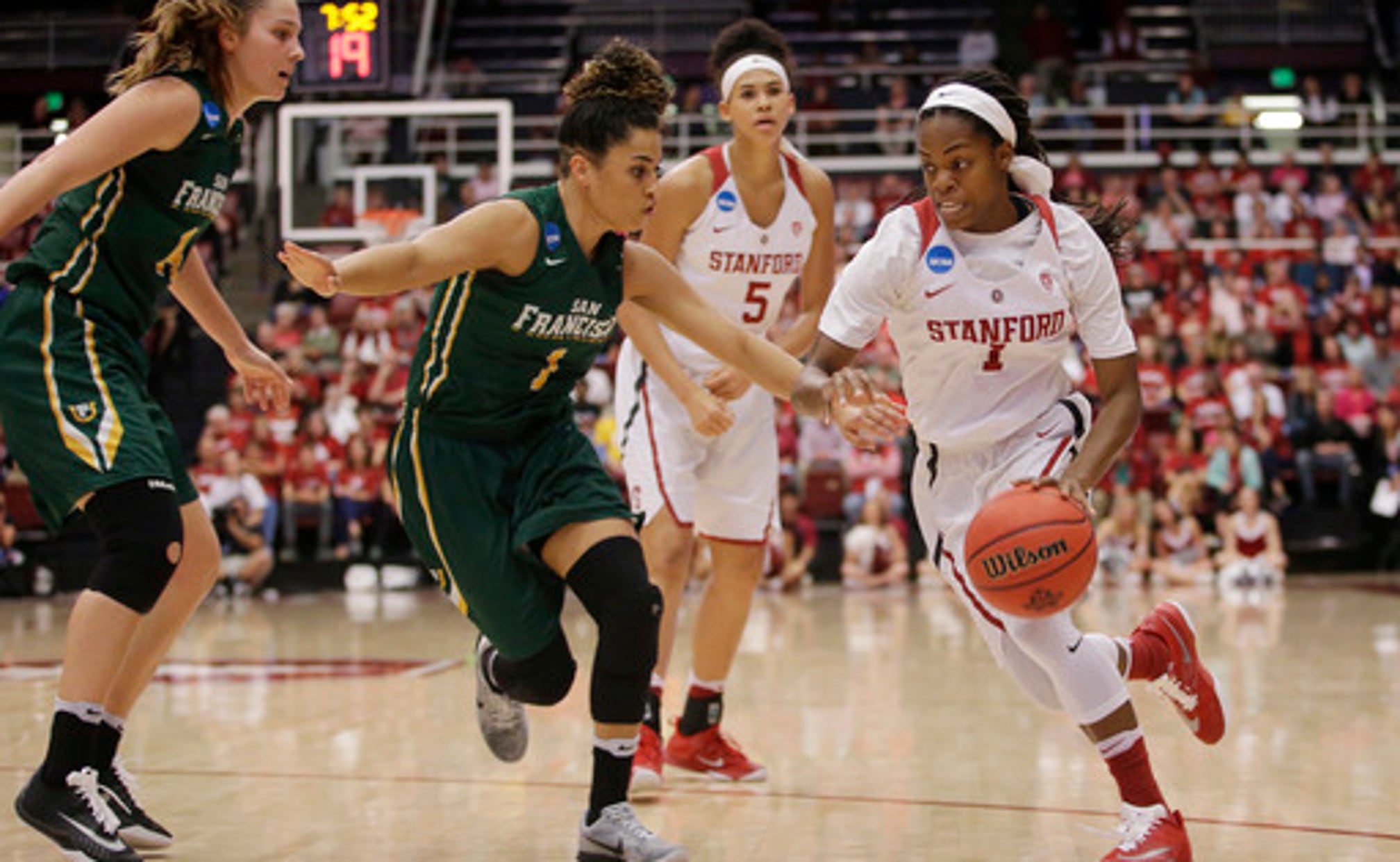 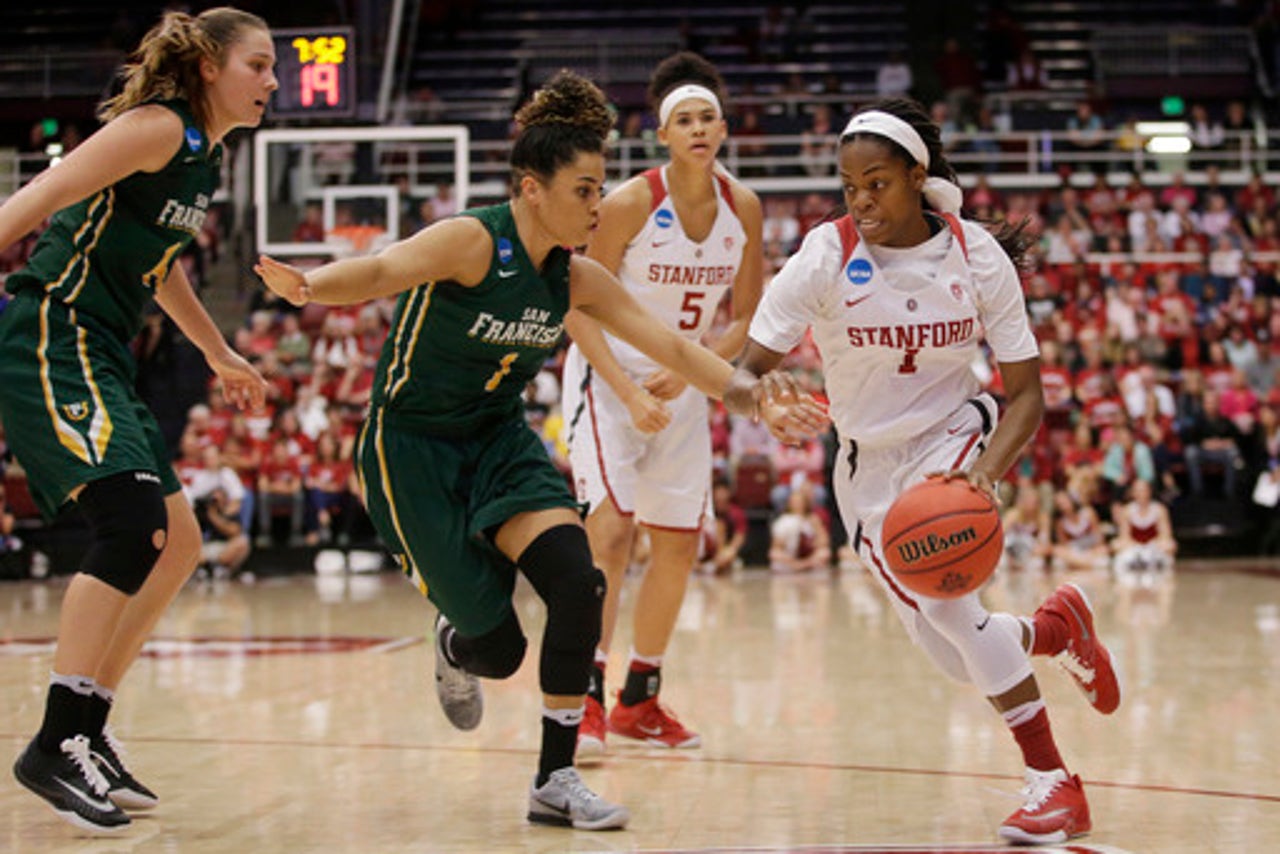 VanDerveer and Jennifer Azzi held their embrace a bit longer than a typical pregame greeting between coaches, then let go of their midcourt hug at last. They parted ways and walked to their respective benches in Maples Pavilion.

These were hardly two strangers saying hello, but rather dear friends.

VanDerveer, the Hall of Fame Stanford coach in the later stages of her decorated career, guided the fourth-seeded Cardinal into the second round of the NCAA tournament by beating her former star player and up-and-comer Azzi's No. 13 seed San Francisco team 85-58 on Saturday night.

''It was all weird,'' Azzi said. ''I'm hugging Tara and we're both saying how it's just strange. My mom and dad are up in the stands and they were in USF gear, not Stanford gear.''

Lili Thompson scored 17 points, Erica McCall had 14 points and 10 rebounds and Stanford (25-7) advanced on its home floor in Maples Pavilion to Monday night's matchup against No. 12 South Dakota State (27-6), a 74-71 upset winner against fifth-seeded Miami earlier Saturday. A berth in the Lexington Regional is at stake.

Rachel Howard came off the bench to score 14 points in USF's first NCAA berth since 1997 under sixth-year coach Azzi.

VanDerveer shared many special memories leading up to the game about her former Stanford All-American and Olympic gold medalist Azzi, whose upstart Dons (21-12) were the surprise automatic berth out of the West Coast Conference tournament after going in as the sixth seed.

Azzi was part of VanDerveer's first recruiting class and led the Cardinal to the program's first national championship in 1990 as Final Four MVP. She also played for VanDerveer on the 1996 Olympic team that won a championship in Atlanta and helped launch the WNBA.

''There are a lot of different emotions about playing against a coach like Jennifer. It kind of reminded me of playing against my sister's team,'' VanDerveer said of sister, Heidi. ''You go back so long with somebody, over 20 years, they're a player for you, playing on the Olympic team, then she's coaching. I'm just really proud of Jennifer and their team.''

The Cardinal took no time getting in sync even after a long layoff of more than two weeks after a shocking first-round exit in the Pac-12 tournament against Washington, and with final exams in the middle of it all before the NCAA opener.

Stanford shot 51.7 percent and should be plenty fresh for Monday after VanDerveer was able to rest her regulars with a big lead, and give her reserves key NCAA experience. The Cardinal dominated the Dons on the boards 49-22 and the Cardinal created an 18-2 advantage on second-chance points with their athleticism and height crashing the offensive glass.

''They're a great shooting team,'' said USF's Taylor Proctor, who added 13 points. ''Their size I think bothered us a little bit. We couldn't put the ball in the hoop.''

The Dons missed six straight shots and 12 of 14 late in the first quarter, going 3:25 without scoring. Stanford then opened the second period with an 8-2 run and built a 32-17 lead midway through on Kaylee Johnson's layup. Stanford led 43-25 at halftime and kept rolling.

There were 17 fouls called alone in the third quarter and 45 in all.

The Dons - who sold 600 tickets for the game and had fans planning tailgate parties on Stanford's campus - had seven players on their roster representing five different foreign countries: Canada, Denmark, Finland, Slovakia and Sweden.

San Francisco: The Dons lost their 16th straight to the Pac-12 and national power, but this was just the second meeting since Azzi took over after Stanford's 100-45 win on Dec. 22, 2010, for VanDerveer's 800th career victory. This was USF's first game at Maples Pavilion since 2007. ... USF knocked off the top three teams in the WCC tournament to return to the tournament at last for a mid-major that used to rule in men's basketball. ''This is special,'' athletic director Scott Sidwell said. ''We're really lifting our whole university and community. It's the opportunity we've coveted.''

Stanford: Reserve freshman G Marta Sniezek had eight points and game-high nine assists in her NCAA debut. USF had 10 assists total. ... VanDerveer needs 22 victories to join Pat Summitt as the only NCAA women's basketball coaches with 1,000 career wins. ... The Cardinal improved to 33-4 in the NCAA Tournament at home. ... Heidi VanDerveer, UC San Diego coach, also attended to support her. ... Maples Pavilion has hosted more tournament games (64) than any other venue except for Tennessee's Thompson-Boling Arena (66).