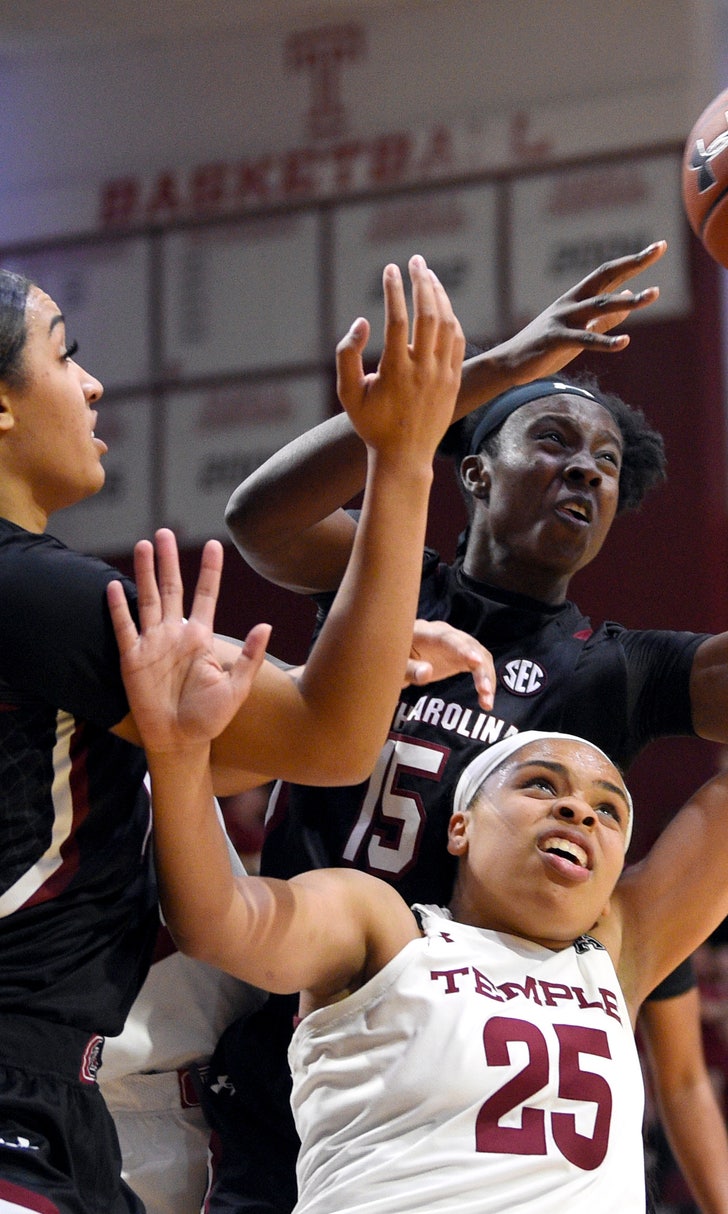 Olivia Nelson-Ododa added 16 points and 10 rebounds. Christyn Williams had 12 points and Crystal Dangerfield, who returned to the Huskies starting lineup after missing two games with back spasms, chipped in with 10.

Anaya Peoples had 17 points and 11 boards to lead Notre Dame (5-6), which has a losing record for the first time in 16 years. Katlyn Gilbert scored 15 and Marta Sniezek added 14 for the Irish.

STARKVILLE, Miss. (AP) — Mississippi State lost its first nonconference home game since 2014 when Kirsten Deans made a tiebreaking 3-pointer with just over a minute left to lift West Virginia.

The Bulldogs (8-2) hadn't lost at home to a team outside the SEC since falling to South Florida in the WNIT six seasons ago. But they made just 15 of 30 foul shots in this defeat.

Deans scored 17 points for the Mountaineers (6-1) in the Big 12/SEC Challenge matchup. She banked in her go-ahead shot from the wing.

The Cardinals (9-1) led the determined Norse (4-5) by just 37-35 at halftime. Jones' quick layup started the surge before she added a 3-pointer, two free throws and another layup for a 20-point advantage that included a pair of Elizabeth Balogun layups and a 3 by Dana Evans.

Louisville also turned its defense up a notch and eventually outscored NKU 31-9 while holding the Norse to 27% shooting in the quarter to bounce back from last week's 67-60 loss at Ohio State in the Big Ten/ACC Challenge.

EUGENE, Ore. (AP) — Ruthy Hebard had 22 points on 11-of-15 shooting and Oregon rediscovered its touch from the field in a win over South Dakota State.

After shooting under 50% in their previous two games at the Paradise Jam in the U.S. Virgin Islands, the Ducks (7-1) shot 64% from the field, including 58% on 3-pointers, to overwhelm the Jackrabbits (6-4).

Sabrina Ionescu was within range of the 20th triple-double of her career before being pulled midway through the fourth quarter with 12 points, 11 assists and seven rebounds. Satou Sabally made all four of her field goal attempts in adding 16 points.

Kiah Gillespie also had 17 points for the Seminoles, who started 9-0 for the second time in the past three seasons.

Florida State was swept by Clemson last year and looked to be in for another tough game when the Tigers went up 33-30 late in the second quarter on Kaylee Sticker's 3-pointer. But Gillespie tied it and started a 7-2 run to the break for a 40-35 lead in the Atlantic Coast Conference opener for both teams.

COLLEGE PARK, Md. (AP) — Shakira Austin had 25 points and 13 rebounds and No. 9 Maryland shook off a midweek loss.

Stephanie Jones and Taylor Mikesell both added 20 points for the Terrapins (8-2), who dropped a 66-59 decision at N.C. State on Thursday.

Maryland improved to 26-3 against its in-state rival and has won 19 in a row against the Greyhounds, including a 17-0 mark under coach Brenda Frese.

The Wildcats went 11 of 23 from 3-point range and shot 53% overall while forcing 18 Samford turnovers they turned into 21 points. Sabrina Haines added 12 points for Kentucky (9-0) and Jaida Roper had seven assists and six rebounds to go with three points.

Higgs' basket with 8:56 to play started an 8-0 run capped by a pair of Sutton baskets that had the Longhorns on top for good at 58-53 in the Big 12/SEC Challenge.

Rennia Davis had 15 points for the Lady Vols (7-1) and Jazmine Massengill added 10.

Hillmon was 9-of-12 shooting with nine rebounds for the Wolverines (8-1), who won their fourth straight game. Amy Dilk, Kayla Robbins and Priscilla Smeenge had 10 points each.

Oakland (4-4) got within nine to start the fourth quarter but Smeenge had five points in a 10-0 run.