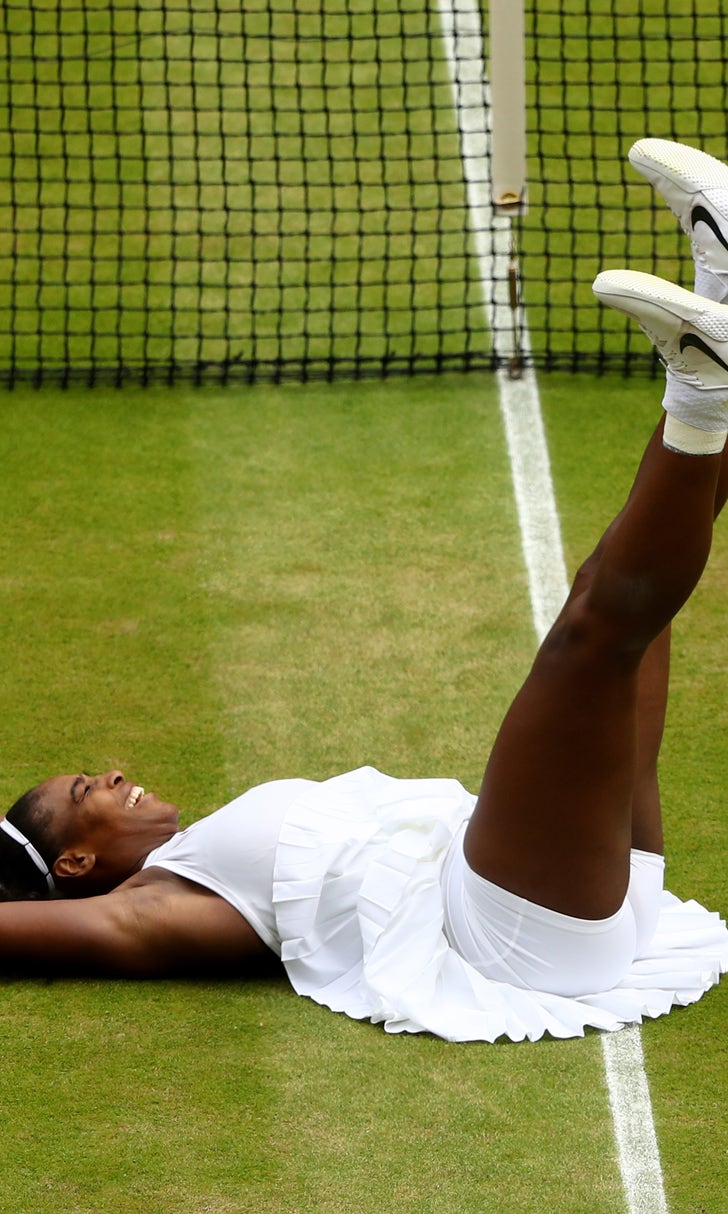 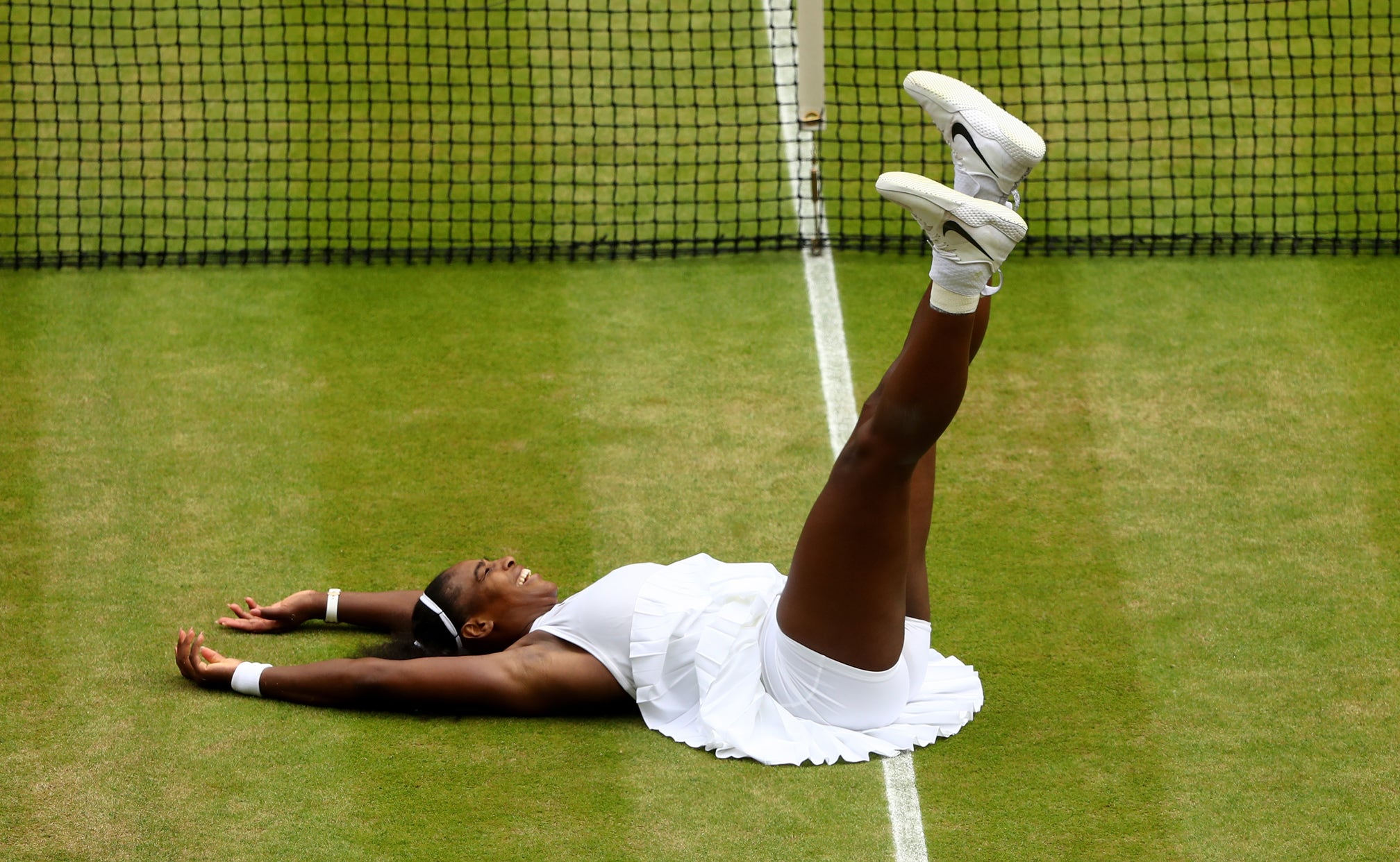 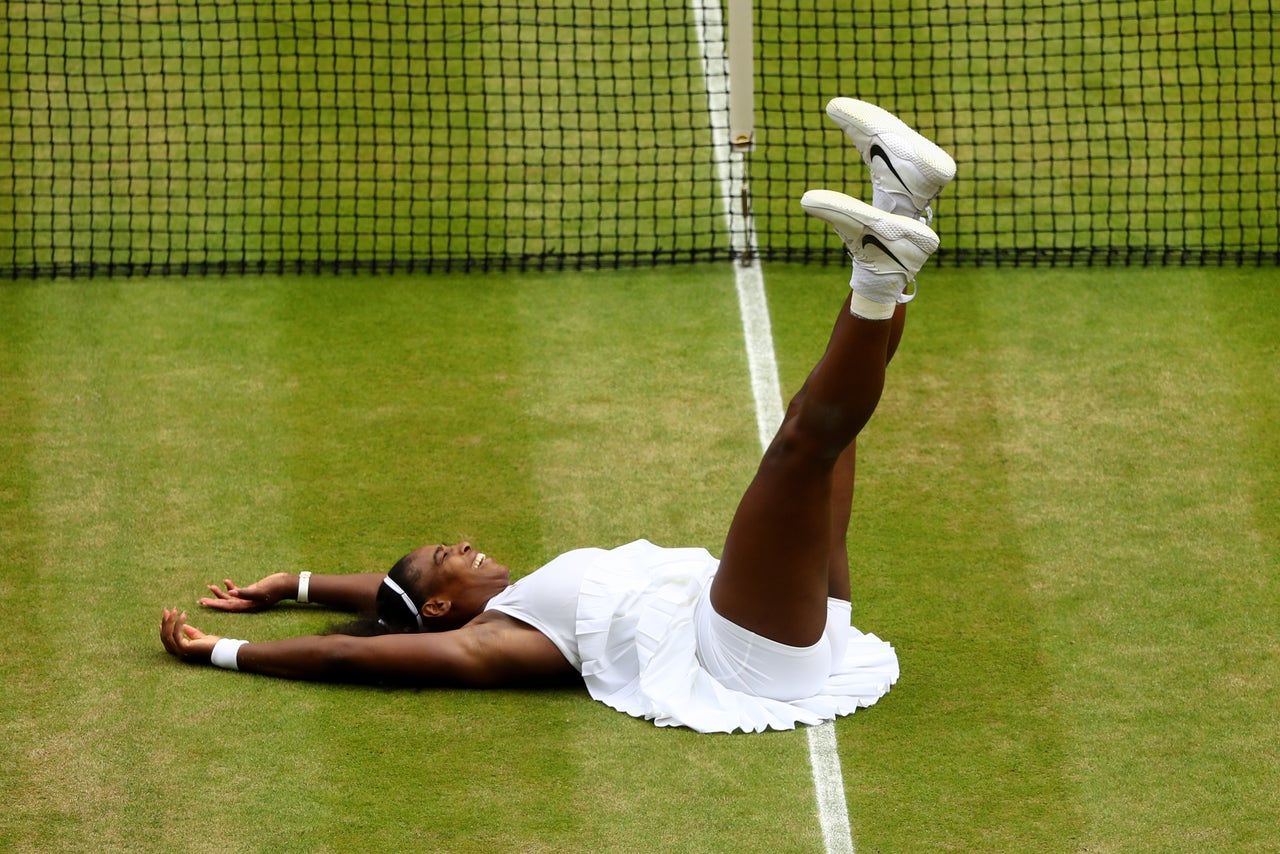 And on the fourth try, it was domination.

Serena Williams won her (relatively) long-awaited, record-tying 22nd Grand Slam on Saturday, powering to a Wimbledon victory with a 7-5, 6-3 win over Angelique Kerber, who had defeated her in a Grand Slam final earlier this year.

With the championship, Serena ties Steffi Graf with her 22 Grand Slam title, a total she'd tried, and failed, to get to three times. The fourth time was the charm with a wonderfully played final on both sides of the net. It was an odd match in that Williams was in control and never really felt in danger of losing, but Kerber played about as well as a Grand Slam finalist can without holding the big trophy at the end. 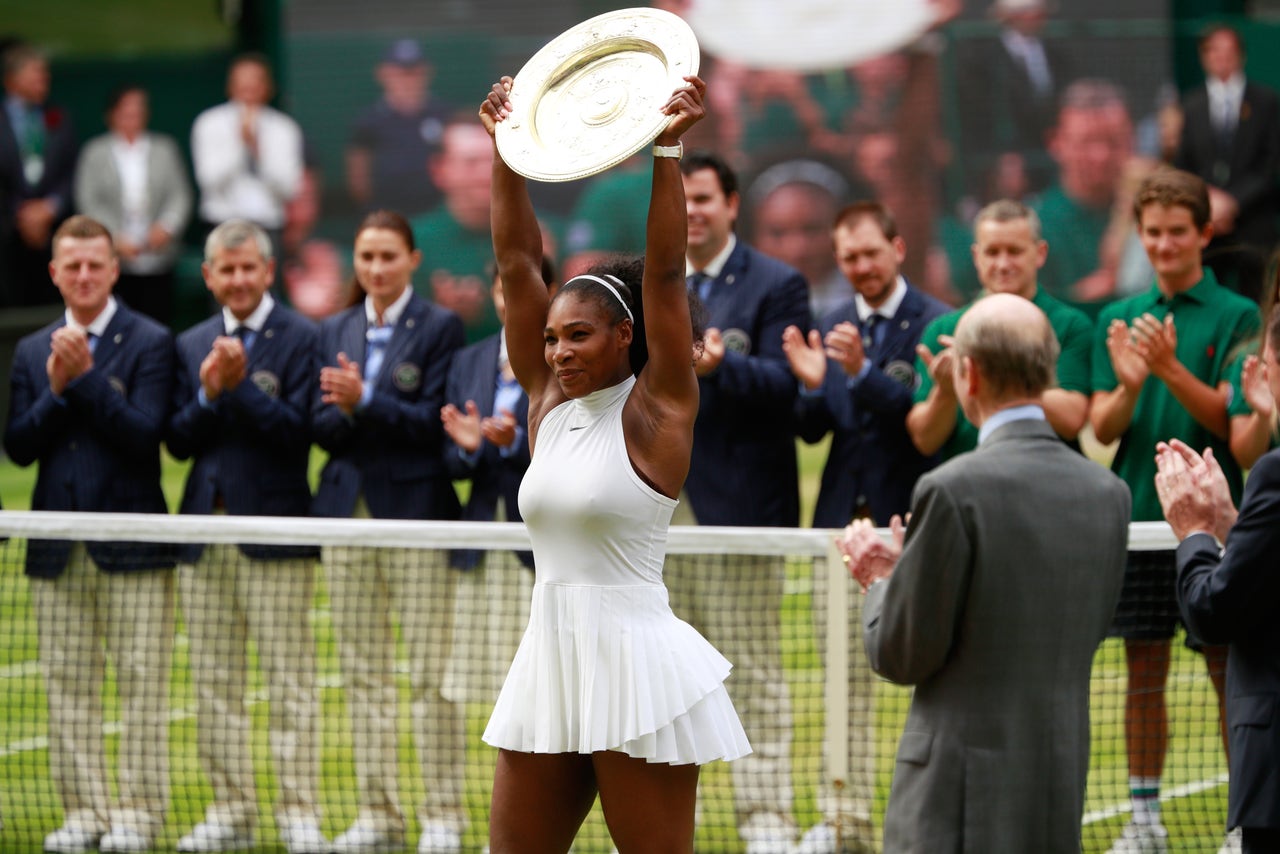 The past two matches -- when Serena won her semifinal against Elena Vesnina in the fastest Wimbledon semi on record and the final -- have been Serena Williams at her finest. Whereas her other recent Grand Slam wins have seen Serena stumble to the end, getting broken once or twice or committing enough unforced errors to allow her opponent to get into a third set, this time was practically robotic. Both times, Serena broke Kerber in her final service game of the set and then, in the second, with the title on the line, she closed out holding at love. No nerves. No need. Thirty-four years old and never more dominant?

Thirty-four and 22, two numbers with which Serena is inextricably (if temporarily) linked. Graf won her 22 over 16 years and a total of 56 starts (she had 12 years between her first and last Slam). That's a title in 39.3% of her starts. Serena's numbers are not quite as efficient (18 years, a total of 64 starts -- 34.4%) but much of that can be blamed on her "lost years," when she won three Slams in five years while Justine Henin was dominating the sport. Those shouldn't be viewed as a disappointment, rather, they're a crucial component to her longevity. 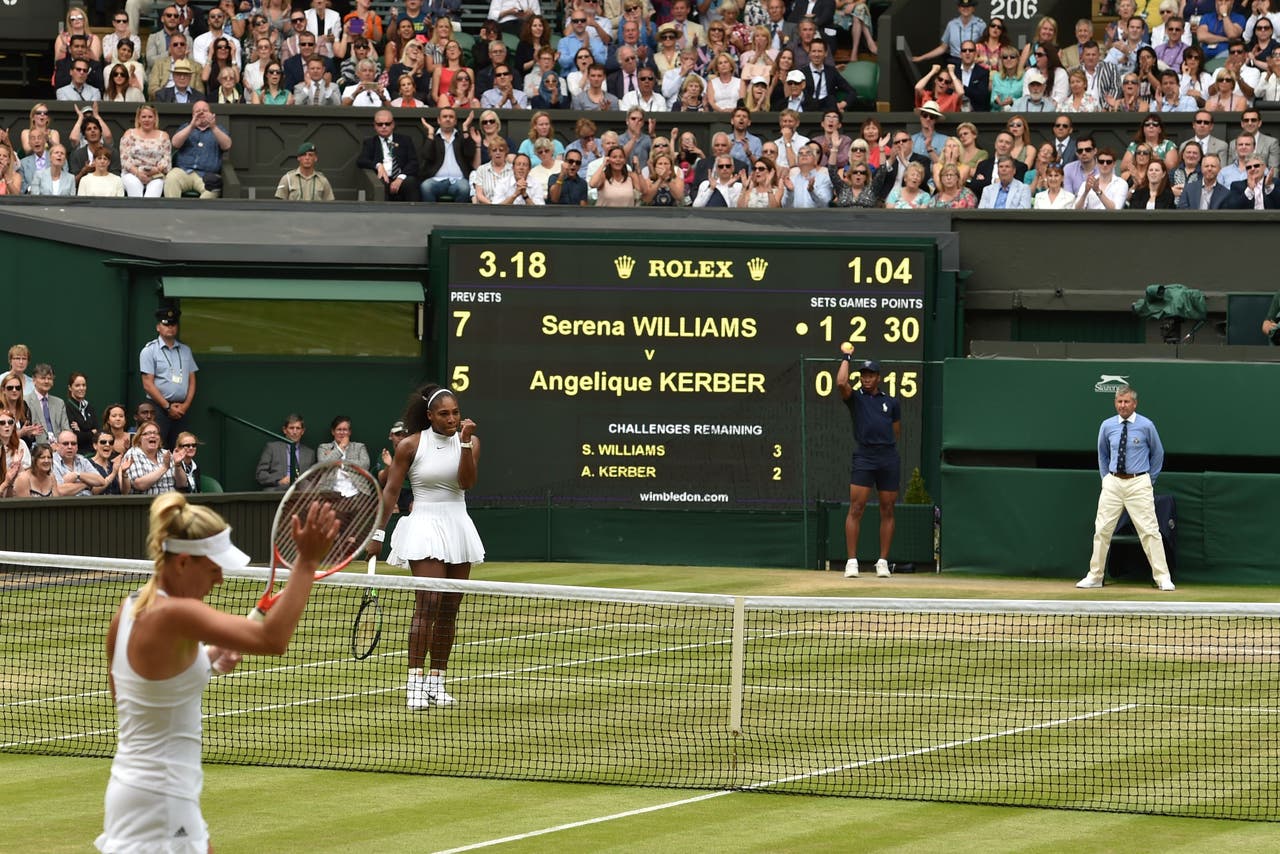 But wait; what about Margaret Court, who won 24 Grand Slams. We're just ignoring her?

It's true. Court, the Aussie superstar from the 1960s and 1970s, has two more Slams than both Williams and Graf. Why leave her out of the equation? Her career straddled the amateur era and the Open era, and in my opinion, comparing records from before and after the Open era is an exercise in frivolity that does a disservice to both sides.

As a refresher, the Grand Slams were only open to amateurs before 1968. Some players remained amateurs for a bulk of, or their entire, career, while others gained fame by winning majors and then cashing in, playing on a professional circuit to make money at the expense of being blackballed from the big four tournaments. The whole thing skews every record from before '68. 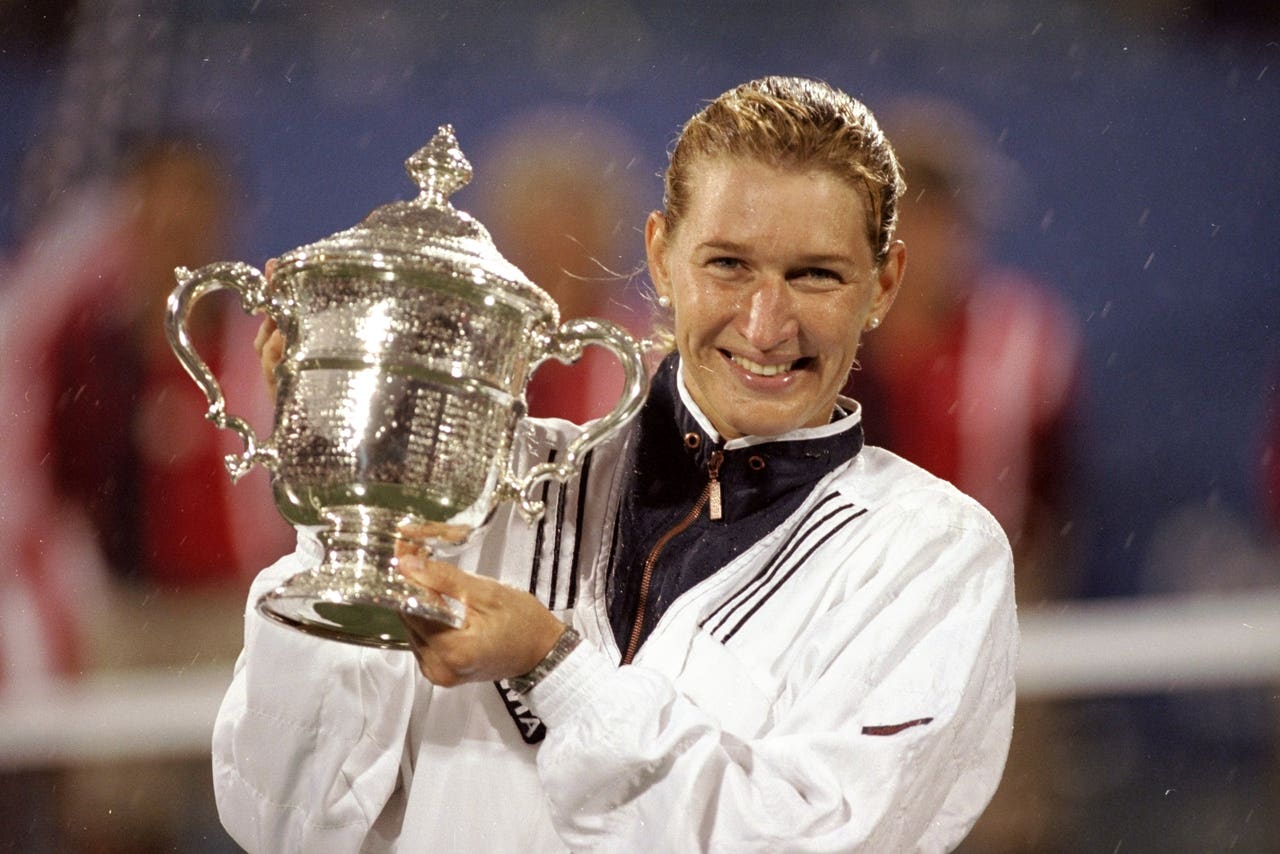 Here's a prime example. American Don Budge was Federer before Federer and Laver before Laver. But when you look at the history books, Budge "only" has six majors. Why? After winning the Grand Slam in 1938, he turned pro. At age 23. If he won six majors in two seasons at 22 and 23, it's safe to say he'd have had 14 at minimum (which would have stayed a record until Federer) and probably more. His place in the tennis record books is thus defined by his actual play, not a number.

Therefore, the pre-Open era results not only minimize the greatness of the men and women who went pro, they also theoretically overstate the greatness of those who didn't, under the theory that the fields were weaker because the top players weren't there. Whoever was playing Wimbledon in 1939 didn't have to face Budge, the two-time reigning champion.

This is not to begrudge the accomplishments of any of those players, especially Court, who won 11 majors after the Open era began and took her other 13 in a time where there wasn't a huge influx of women amateurs turning pro. (She did win 11 Australian Opens, though, in a time when that tournament often wasn't played by top talent. Martina Navratilova once said that if she knew how much Grand Slams would be valued these days, she wouldn't have skipped the tournament eight times in her prime.) All of this is a long way of saying, Margaret Court's record is to be appreciated on its own terms. The 22 by Serena and Steffi might as well be in a different sport. Now, as Serena goes to pass Steffi, don't be lured into a media-driven narrative about trying to beat Court. (Notice how little her name is being invoked today.) 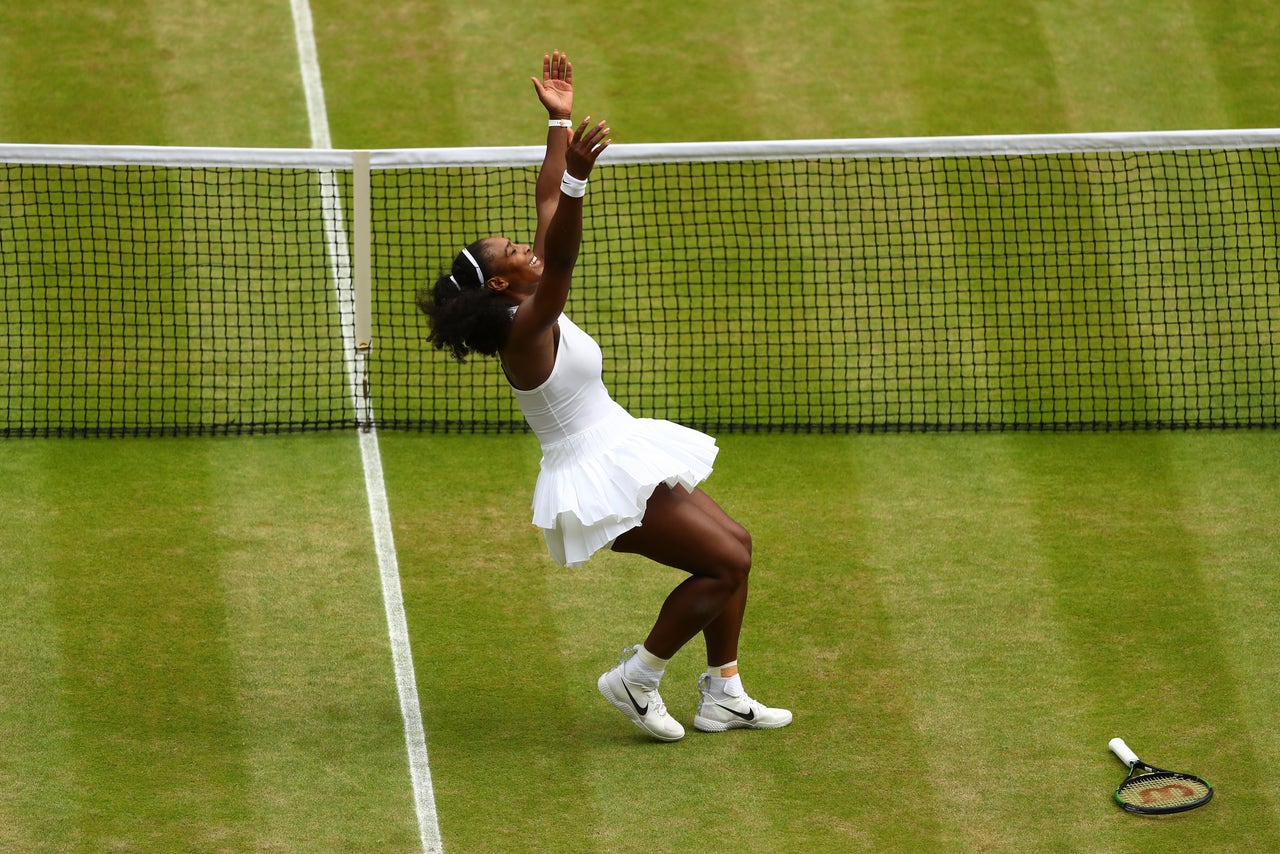 Serena failed at three majors before getting to the two major milestones on her list: Her 18th Slam, which tied her with Steffi Graf and Martina Navrativloa, and this 22nd Slam. After getting No. 18, she won three more after that. Next month, Serena begins her quest to pass Steffi Graf. If she gets back to her usual level of Grand Slam tennis, she might have 25 by the time she gets back to the All England Club.

Serena has long been thought of the greatest player of the Open era. She just about has the record to back it up. But even in other sports, who's going to challenge Serena? Maybe Michael Phelps -- we'll see how Rio goes. The separation between the best in the NFL and NBA isn't great enough to say one player is definitively greater than the others. So, whatever happens, Serena Williams will almost certainly go down as the most dominant athlete of her generation. And with a few years still ahead of her, she's going to get the numbers, then put them so far out of reach, to prove it.