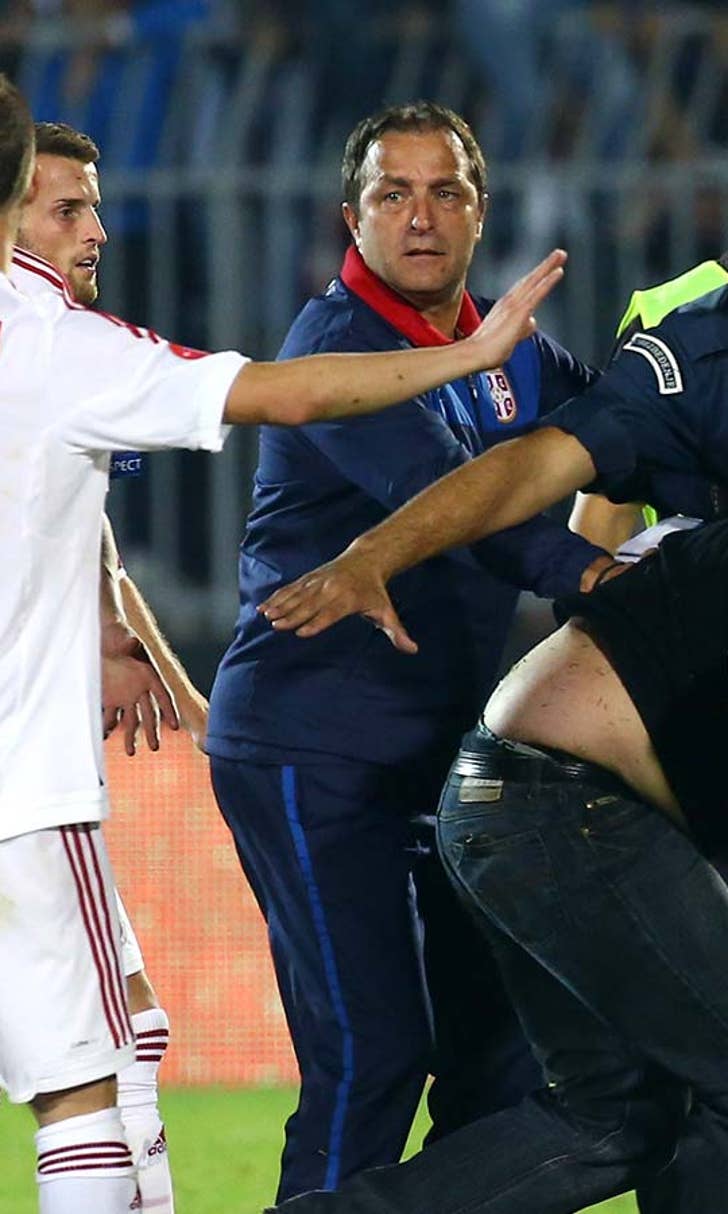 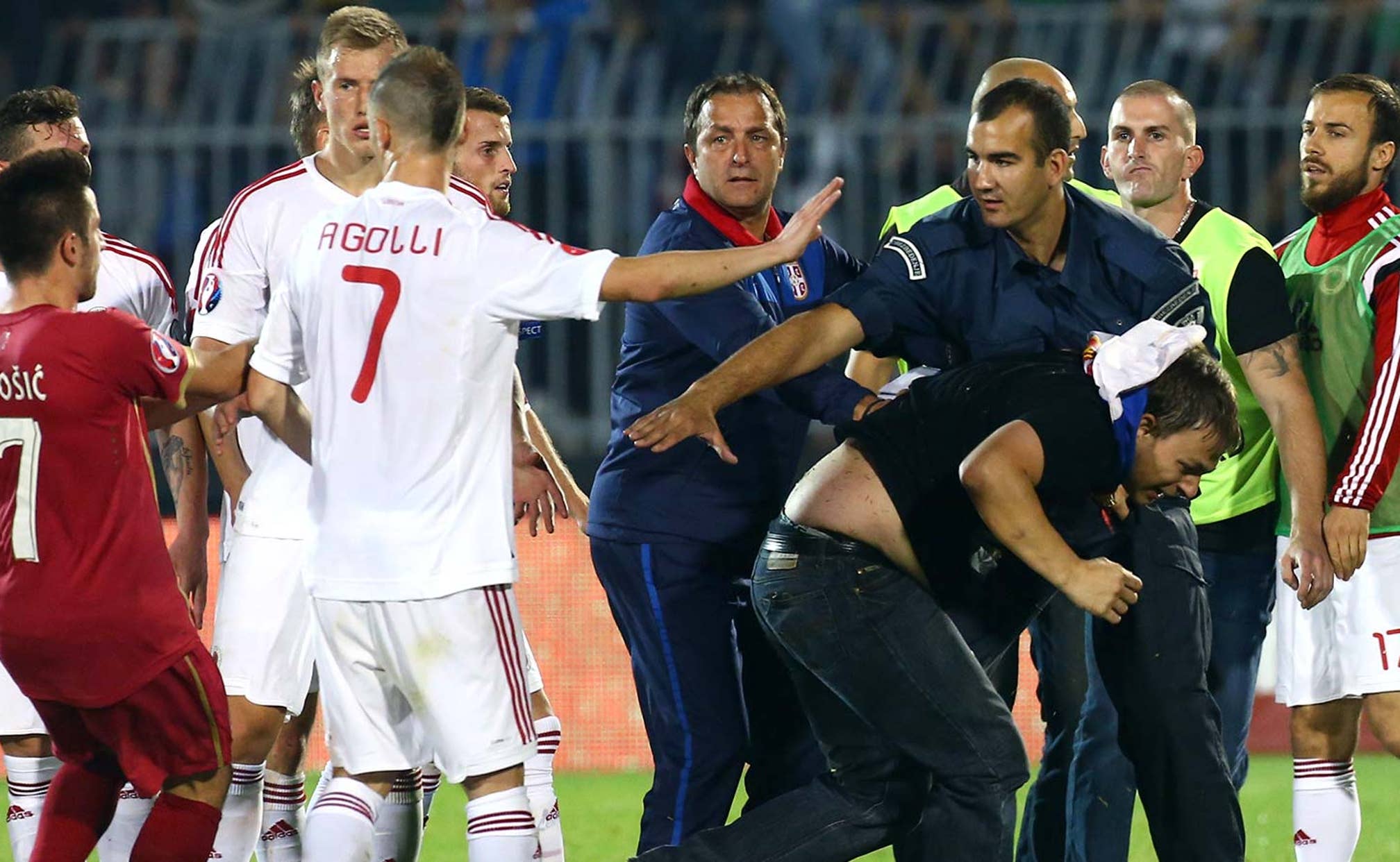 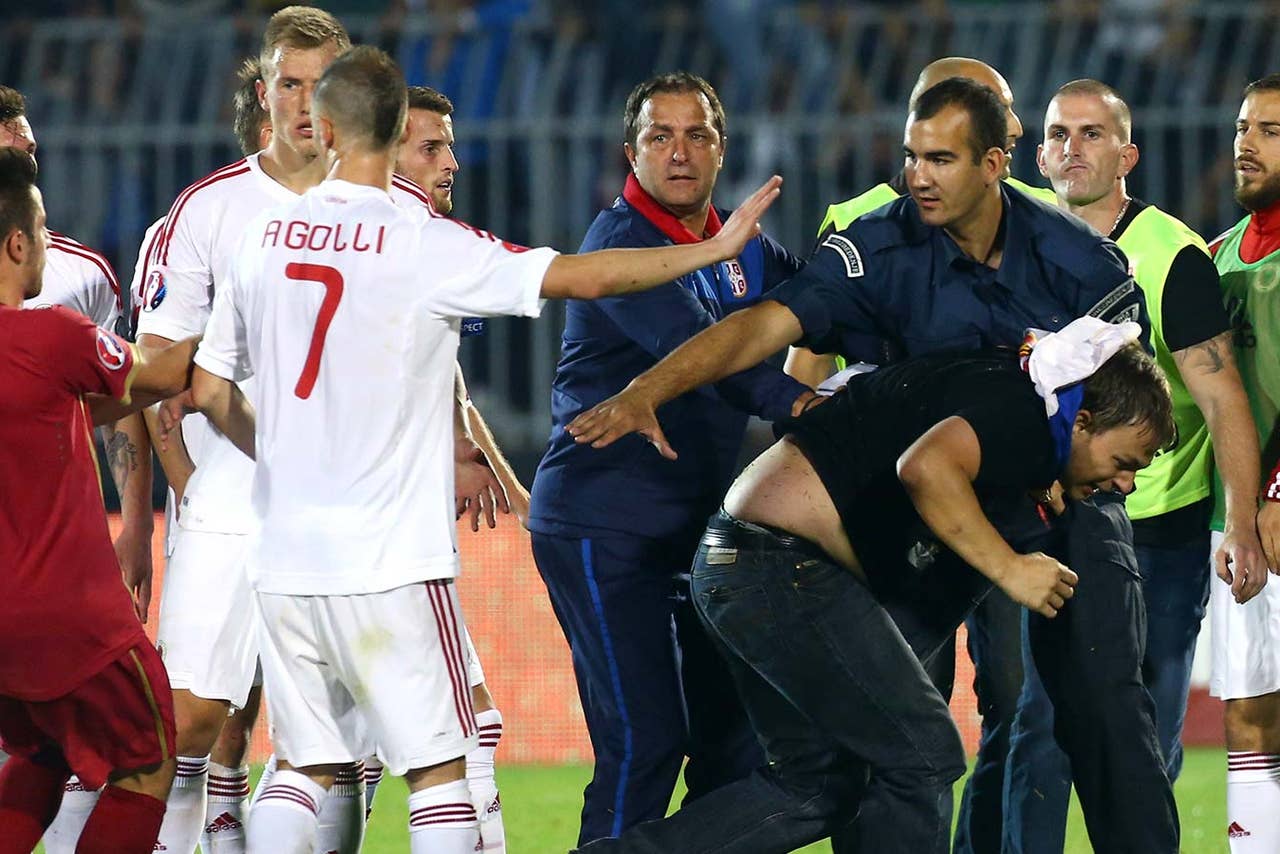 Serbia have been awarded a 3-0 victory over Albania following their postponed Euro 2016 qualifier but they have also been deducted the three points and ordered to play their next two games behind closed doors for their part in the furore.

UEFA's decision means that Serbia effectively receive no points from the game but their goals scored tally will increase by three.

The Group I clash between the two eastern European nations ended in bizarre circumstances when an unmanned drone trailing a pro-Albania flag over the Partizan Stadium resulted in a melee between the two sets of players as well as some Serbian fans.

The sport's European governing body UEFA has taken a dim view of the incident and while Serbia have been awarded the win, its football association has announced it will not get the benefit of the three points and must play its home matches against Denmark and Armenia in an empty stadium.

UEFA charged the countries with a number of offences last week although its Control, Ethics and Disciplinary Body (CEDB) decided not to expel either nation from the group.

In the event, Albania have been punished for refusing to play the rest of the match - even if the stadium had been cleared of fans - while Serbia have been sanctioned for crowd trouble.

The governing body said in a short statement: "The CEDB has decided to declare the above-mentioned match as forfeited. As a consequence, the Football Association of Albania (FShF) is deemed to have lost the match 3-0. In addition, the FShF has been fined 100,000 euros.

"The CEDB has also decided to deduct the Football Association of Serbia (FSS) three points for the current UEFA European Championship qualifying competition. In addition, the FSS has been ordered to play its next two UEFA competition matches as host team behind closed doors. Finally, the association has been fined 100,000 euros.

"These decisions are open to appeal."

The match, which was goalless at the time of the abandonment, erupted into controversy three minutes before half-time in Belgrade when the drone, apparently flown in from outside the stadium, was brought down by Serbia defender Stefan Mitrovic.

That upset a couple of Albania players which led to brawls involving players, officials and fans before English referee Martin Atkinson led the teams off the field.

Objects were thrown onto the pitch while video footage shows some Albania players being assaulted by Serbia supporters as they attempted to come off the pitch.

Albanian fans had been banned from entering the stadium by UEFA on safety grounds and the match was set against a backdrop of tight security.

Tensions have never been far from the surface between the nations over Kosovo, the province with which both countries share a disputed border and is recognised as independent by the United States and major European Union countries but not by Serbia - a bone of contention with Albania.

The incident led both football associations attempting to blame the other for the abandonment.

Serbia claimed the incident had been a ''scenario of a terrorist action planned in advance'', but the Albania FA hit back saying the team were targeted even before the game when stones were thrown at the bus, and its delegation and players were hit by a piece of concrete and other missiles during the warm-up.

UEFA's sanctions draw a line under the incident although all eyes will be on October next year when the two countries meet again in Albania.