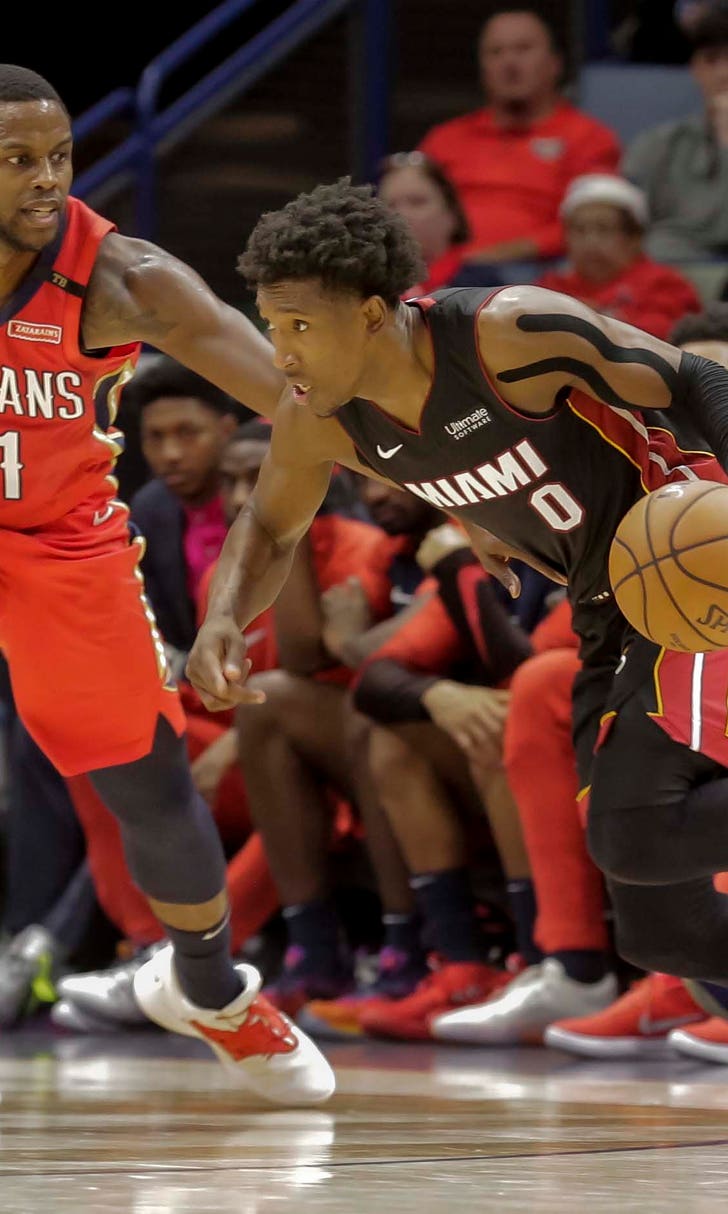 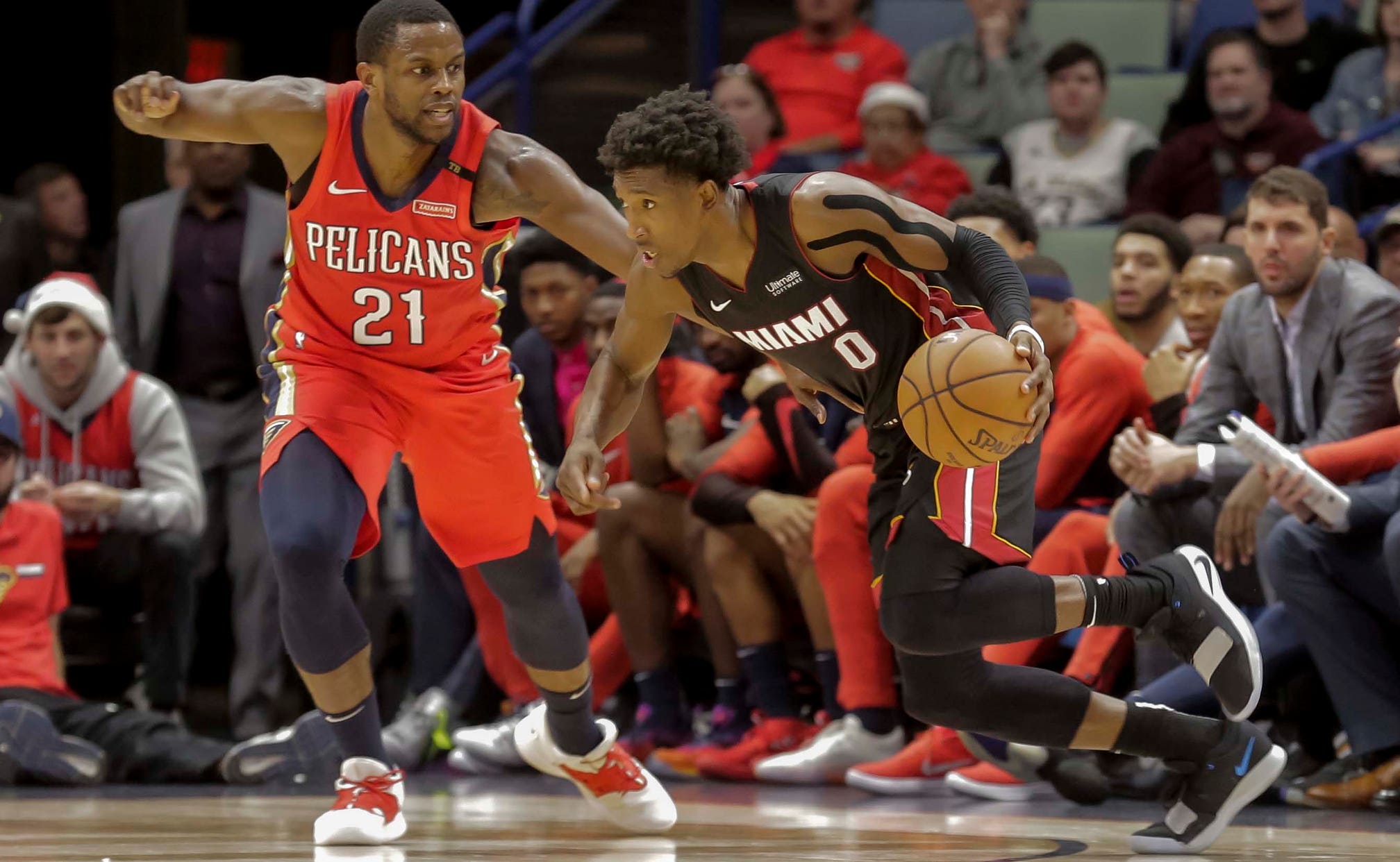 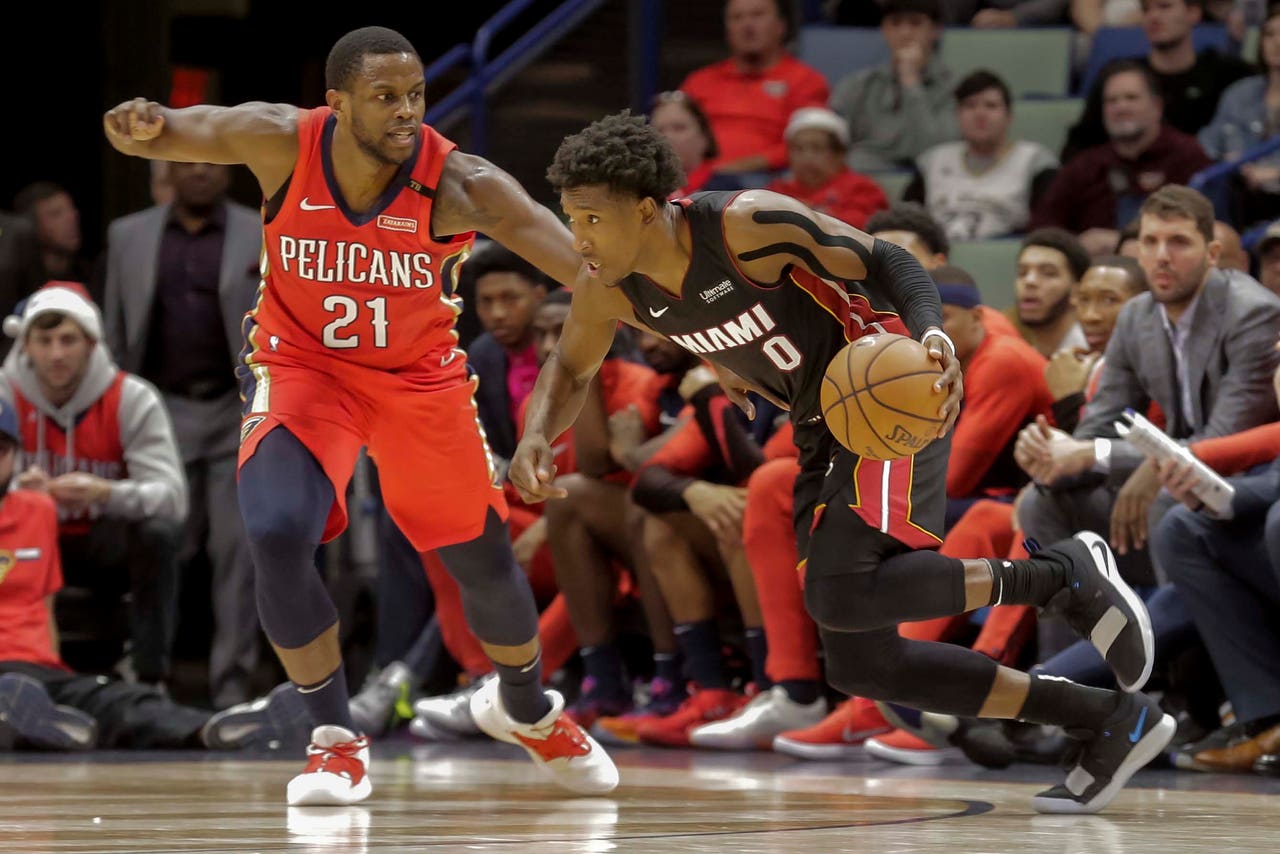 NEW ORLEANS (AP) — Josh Richardson scored 22 points, Dwyane Wade added 19 in what was likely his final game in New Orleans, and the Miami Heat beat the Pelicans 102-96 on Sunday night.

Hassan Whiteside had 17 points and 12 rebounds in his matchup with Anthony Davis.

Davis had 27 points, 12 rebounds, three blocks and three steals, but curiously did not take his first shot of the second half until hitting a 3-pointer with 5:43 left in the fourth quarter.

Davis' second 3 of the period had the Pelicans as close as 96-90 with 2:32 to go. But Miami, which led nearly the entire game — and by as much as 17 — squashed any hope of a late comeback with clutch play from Wade, whose driving floater in the lane made it 100-92 with 51 seconds left.

Wade, who received an enthusiastic ovation when he first checked in, also drew cheers as he left the court from fans gathering near the tunnel to the visitor's locker room. They chanted "D-Wade! D-Wade!" as he stopped to signs autographs.

Both teams shot worse than 42 percent and Miami missed 25 3s, but the difference in the game was Miami's rebounding. The Heat outrebounded the Pelicans 57-38, pulling down 22 offensive rebounds and converting them into 25 second-chance points

Julius Randle had 17 points and 10 rebounds for the Pelicans, but limped to the locker room with 6:49 to go after rolling his right ankle during a lost scrap for a rebound. Jrue Holiday had 22 points for New Orleans, but missed contested fast-break layups in each half and fouled out in the final seconds.

Miami led by as many as 11 points in the first half after Richardson's 17-foot jumper in the second quarter. The Pelicans gradually closed the gap to 54-51 on Davis' tip-in, which gave him 18 points for the first half. But in the final seconds before halftime, Wade banked in a 3 while Davis guarded him closely. The shot looked a bit lucky, but it made Wade 3 for 3 on 3s to that point and gave Miami a 57-51 lead at halftime.

The Heat then opened the third quarter with an 11-0 run, starting and ending with Johnson's 3-pointers, to push their lead to 68-51.

But New Orleans responded with a 13-2 run during which Randle made two layups — one while being fouled for a three-point play — and a dunk to pull the Pelicans to 72-66 in the middle of the period.

Heat: Reserve wing player Derrick Jones Jr. scored 11 points in 21 minutes. ... Guard Goran Dragic sat out for the fourth time in five games with right knee soreness. ... Starting forward Justise Winslow left the game in the first half with right ankle soreness and did not return. He played 15 minutes and had two points, three assists and two rebounds.

Pelicans: Forward Nikola Mirotic missed his second straight game with a right ankle injury. ... Forward Darius Miller missed eight of nine shots, including seven of eight from 3-point range, where he normally hits 38 percent. ... Guard Frank Jackson was back with the club after spending one game with the G League's Texas Legends in which he scored 20 points. He played just four minutes and did not score. ... The Pelicans also announced they have recalled wing-play Kenrich Williams from the G League.