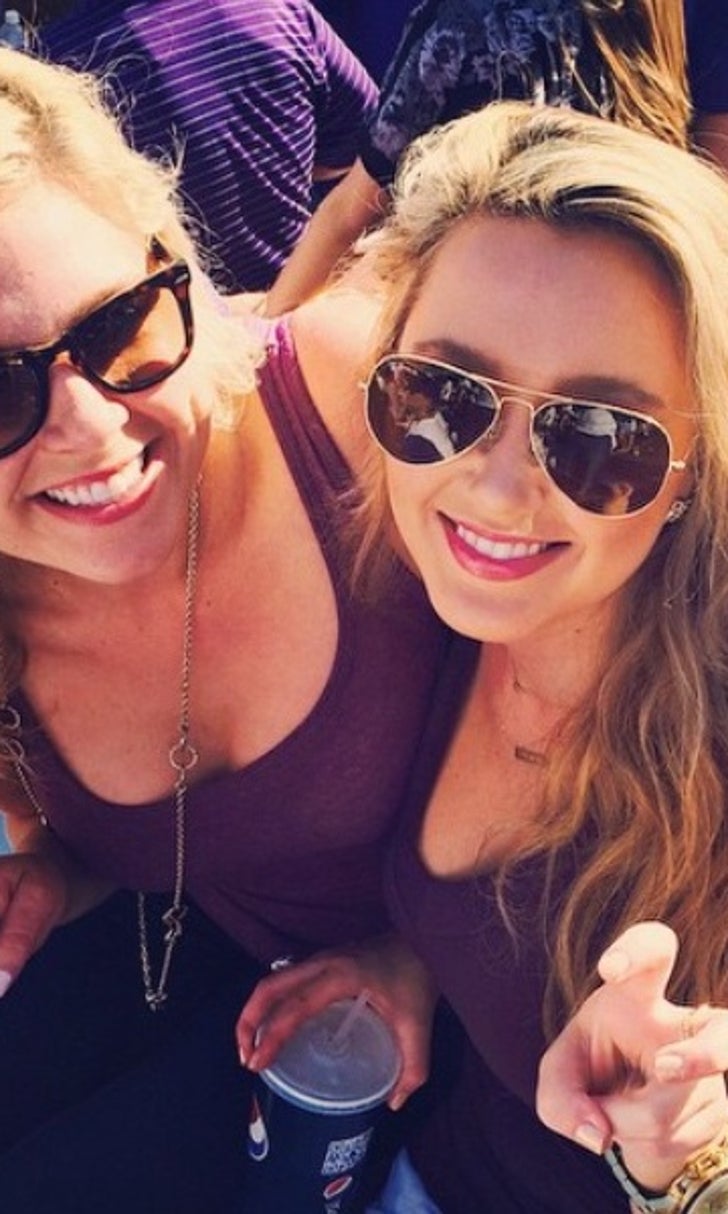 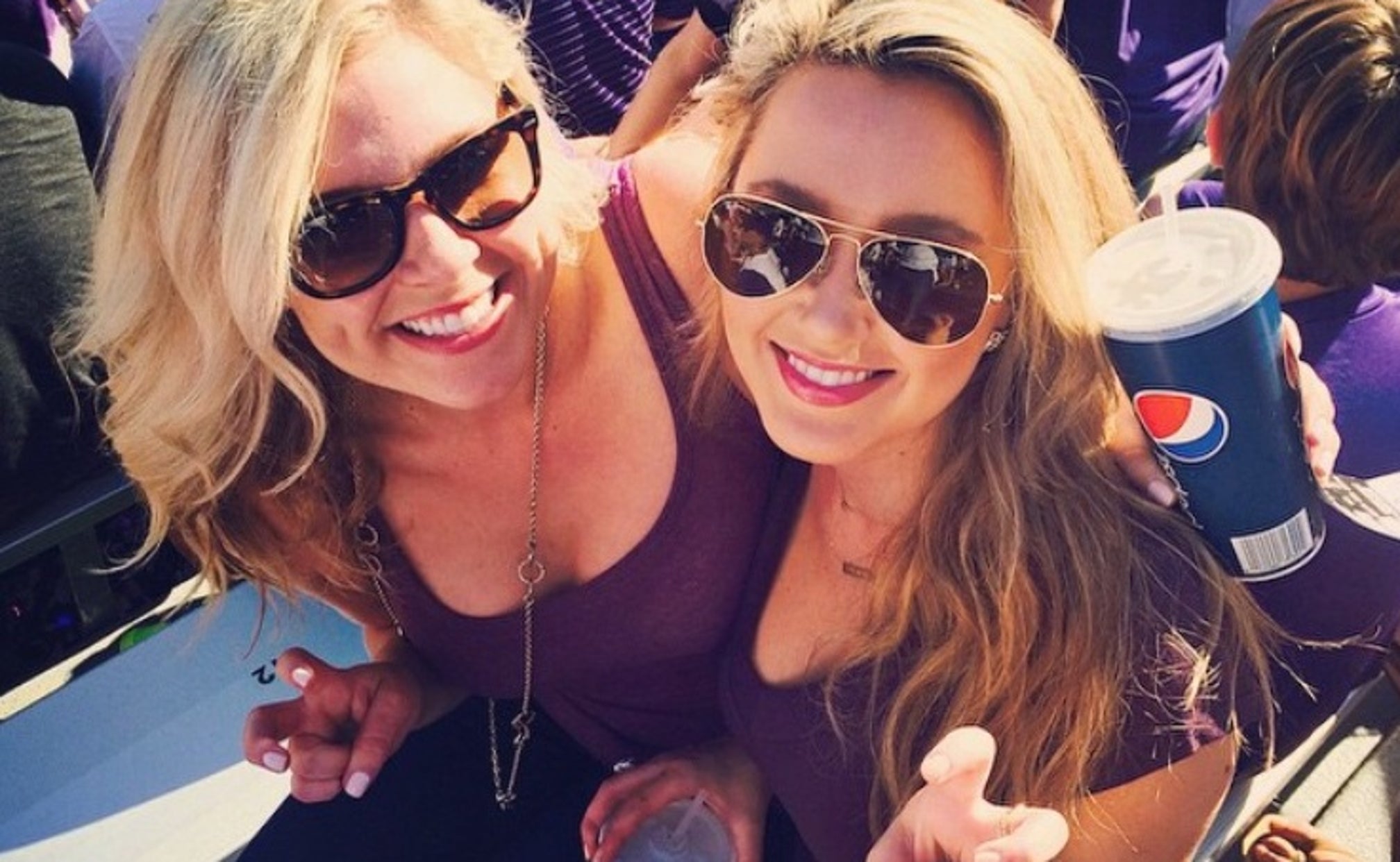 Todd Fuhrman asked me why in the world I was going to such an irrelevant game this week. The answer is...

1. I'm exhausted and while this has been one of the greatest football seasons of my life, it's tiring doing it while also working a "regular job" so I was looking to stay home in Funky Town.

2. Texas Tech had nothing to lose at this point. TCU? Everything. It could be a quiet sleeper game that people wrote off.

3. I had a debutante ball to attend. Yes, mark those under things that shouldn't happen during football season. And the real reason I went to this game,

4. Kliff Kingsbury. Seriously, that's the only reason I needed. He's even more attractive in person.

I have never been to a TCU game before, but after moving to Fort Worth I have a ton of friends who went to TCU so I feel like I have from listening to all of their stories. The neat thing about TCU is that it's in this big city but campus makes you feel like you're in a small college town. It's beautiful. The city rallies around the school and the football team with businesses big and small all wearing purple on Fridays of game weeks. Gary Patterson may easily be one of the nicest people in college football on top of being a great coach. So many people had written TCU off at the beginning of the season, but after their big win at Oklahoma (which I wish I had seen instead of watching Alabama lose in Oxford), they've been creeping into the hunt. Let's see what Funky Town had to offer this weekend.

On Friday my good friend Michael Levy, who was a standout golfer at TCU and now works for the athletic department, gave me a tour of the newly renovated football stadium. It's beautiful. While it's not nearly the size of many SEC stadiums, it has managed to find a way to make seating for 50,000 feel intimate. First he took me to see the Founder's Club which is a special area for the top 8 donors who made the renovation process possible. Each of these families have their own suite, that they designed, and receive 48 tickets for their closest friends to their own club complete with full kitchen and an award-winning chef, seating area, and open bar. There are worse ways to watch a football game. My favorite part of the whole area? They kept one of the doors that was the entrance to the old stadium and now it leads into one of the suites. 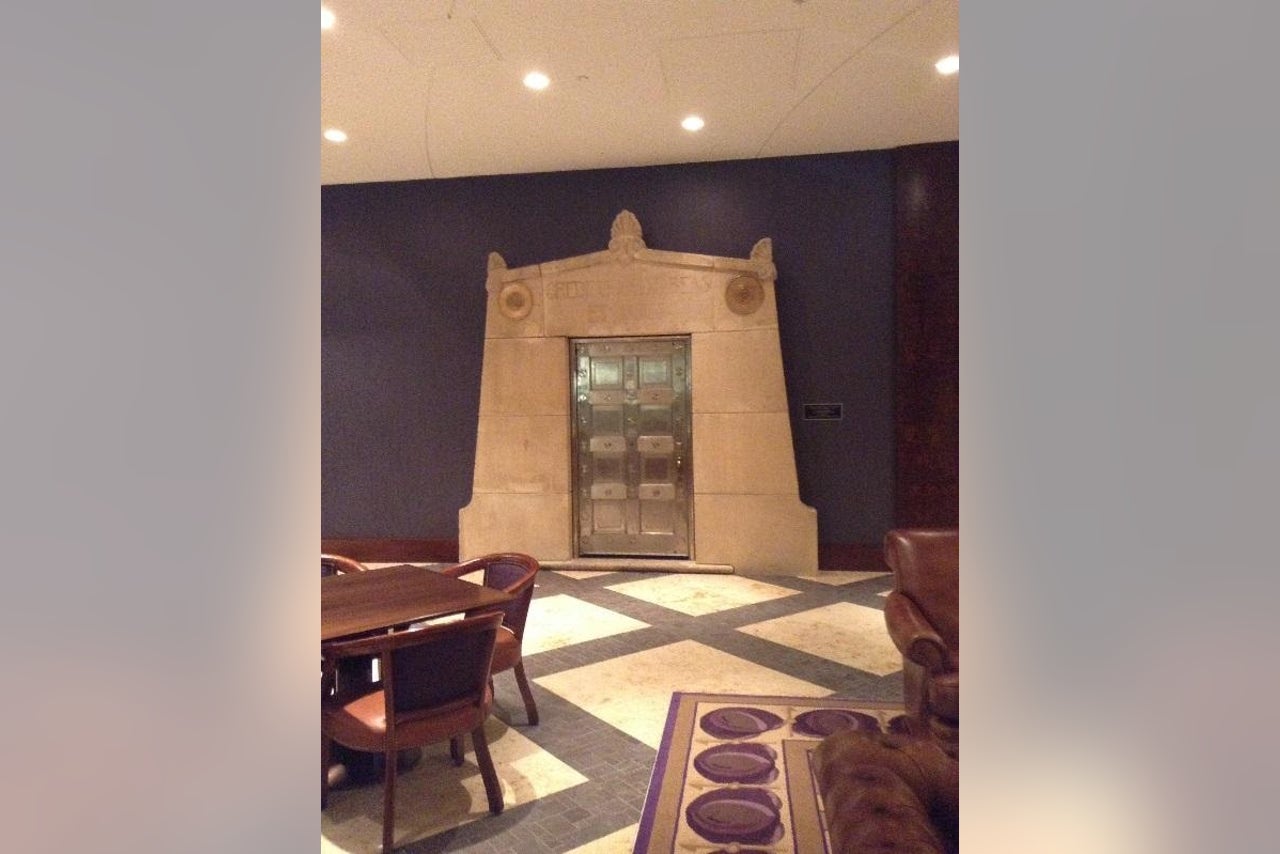 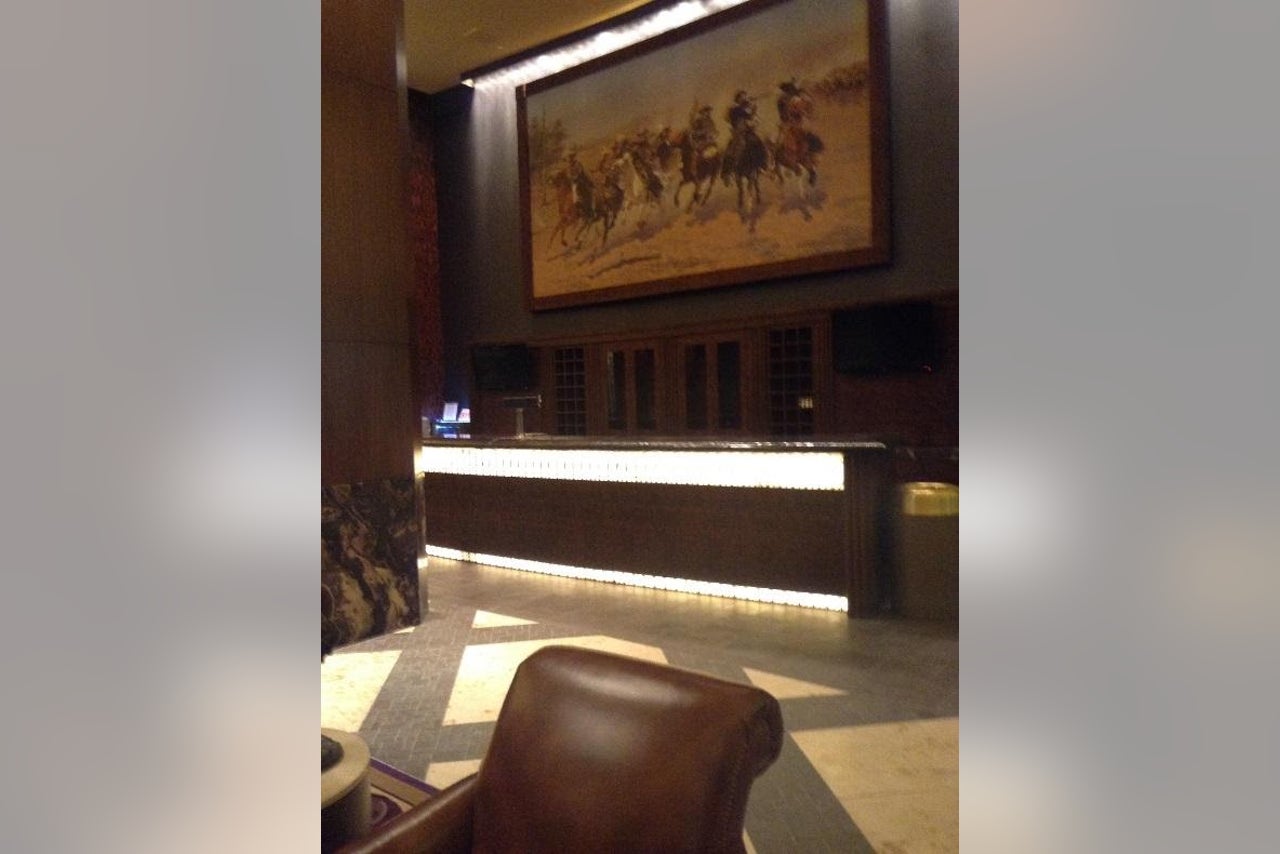 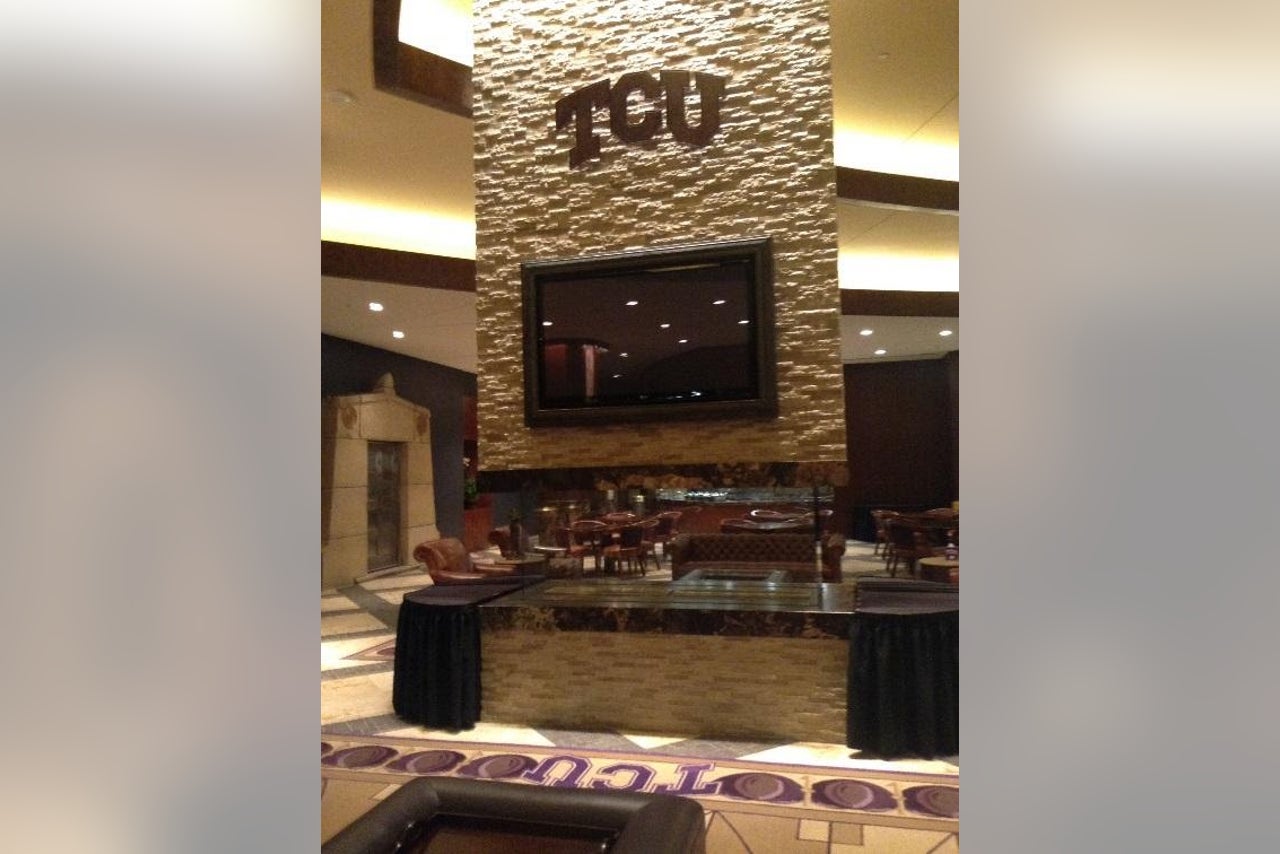 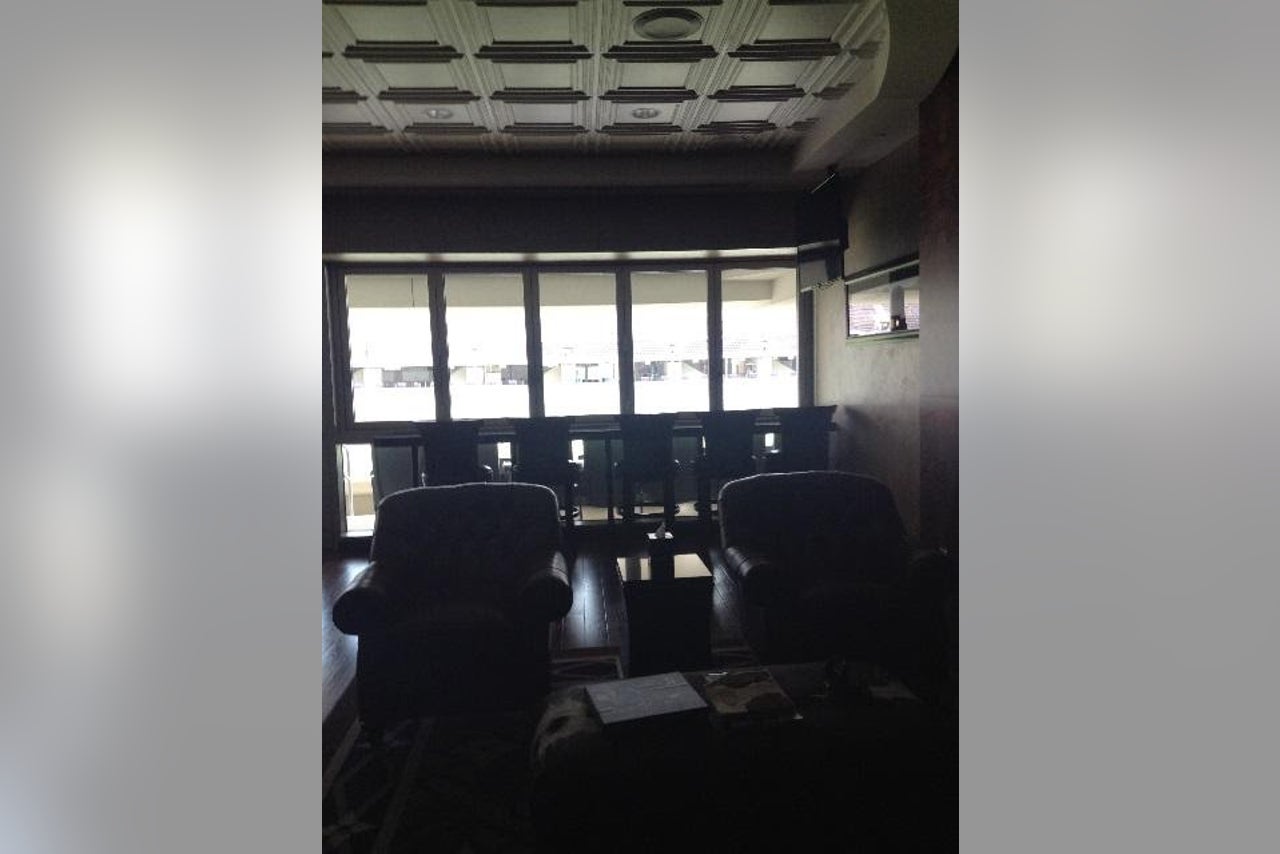 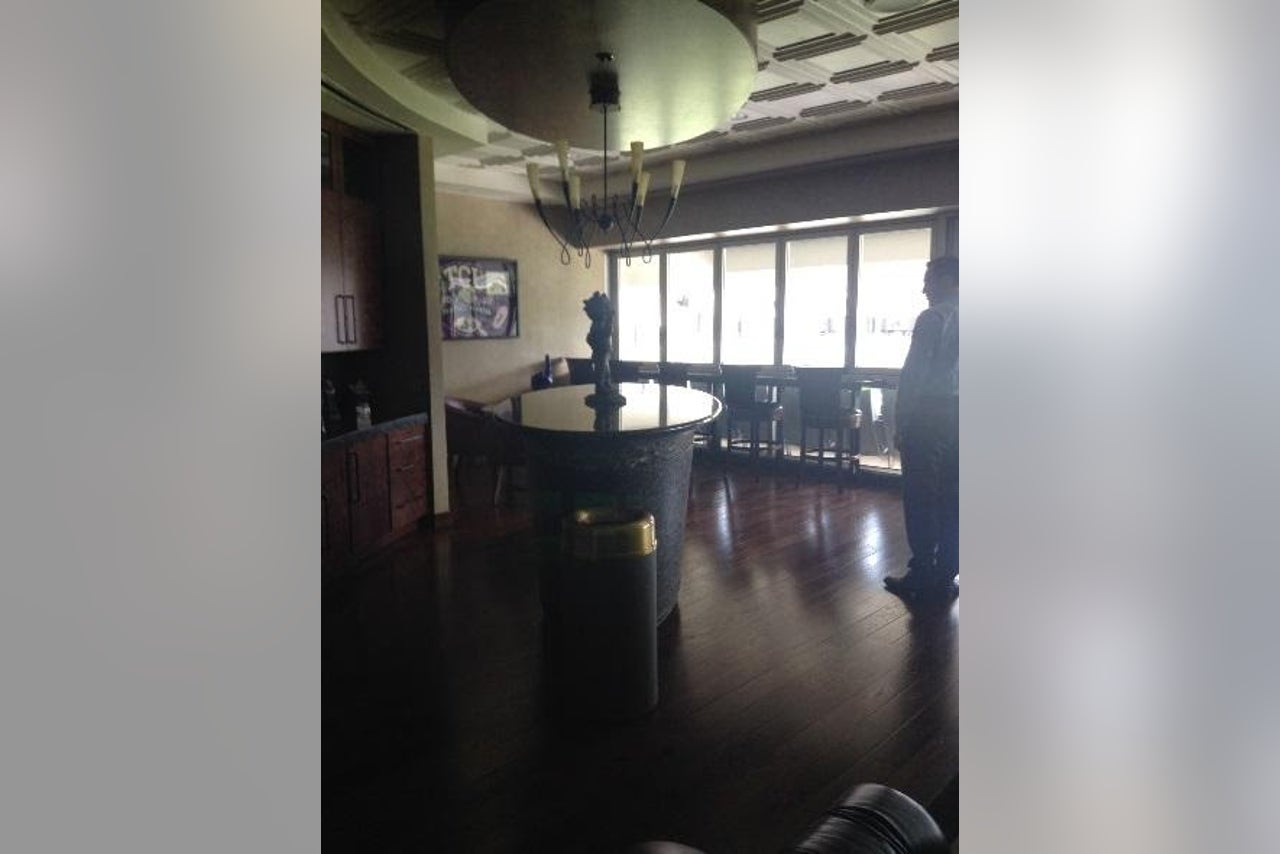 After the Founder's Club tour, we headed to the Frog Club. This would be similar to the club seating in some of the SEC stadiums I've been to. When TCU is either getting beat horribly or annihilating their opponents it's the social place to be, and sometimes it's hard to get people to actually sit in their seats to watch the game. The solution for this? There are now cups holders at each seat where someone will come take your drink/food order and then deliver it to you. I would love to have a glass of wine delivered to my 50 yard line seat during a college football game. How has the SEC not capitalized on this yet? Somebody, MAKE. IT. HAPPEN. 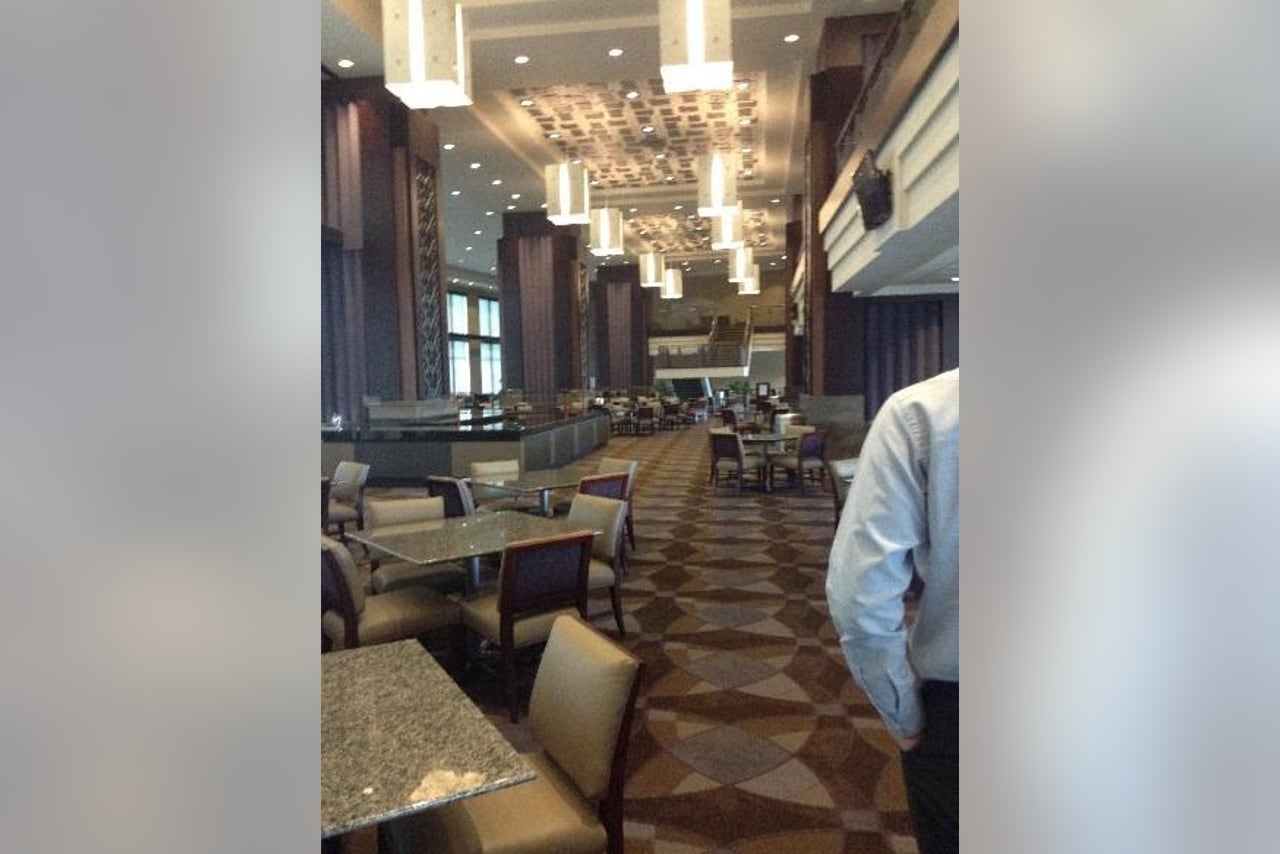 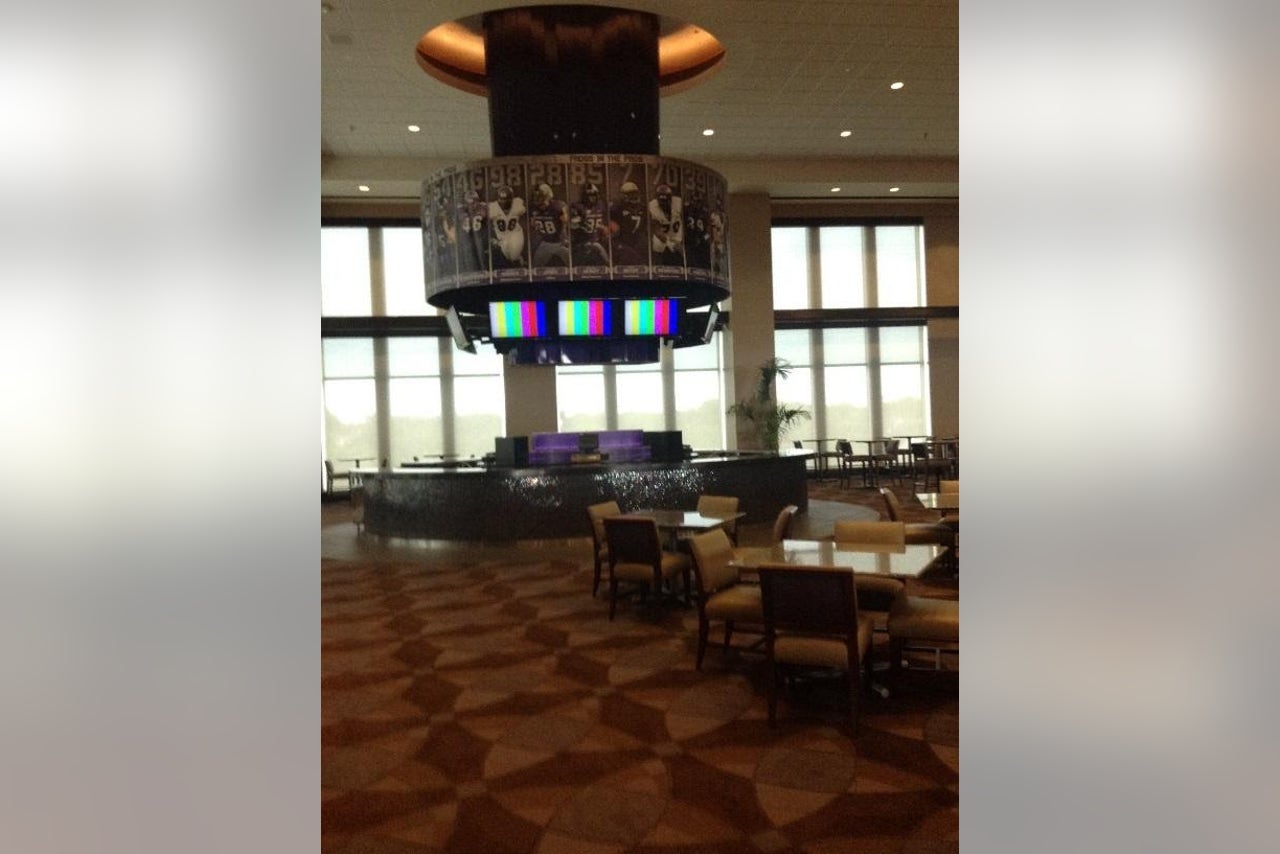 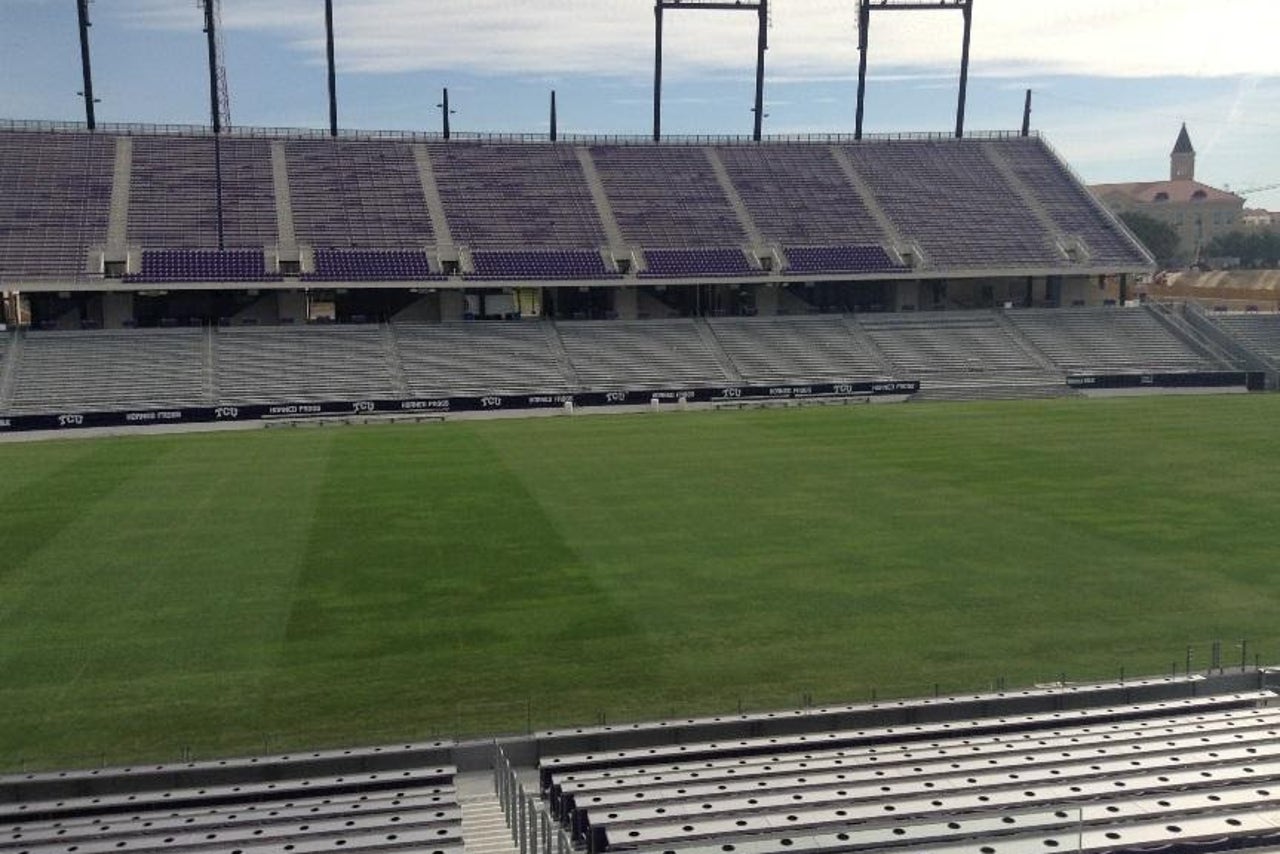 Huge thanks to Michael and the entire TCU athletic department for all of the access they gave me to their program this week. The atmosphere is so laid back and personal at TCU.

My game day outfit came from riffraff Dallas, which was started in Fayetteville so they were my only call since I knew they would have what I needed for game day. They were WONDERFUL, and you should all go visit. I like to branch out so once again I wore Show Me Your MuMu in purple, red, and black, which kept me perfectly neutral. Loved it. 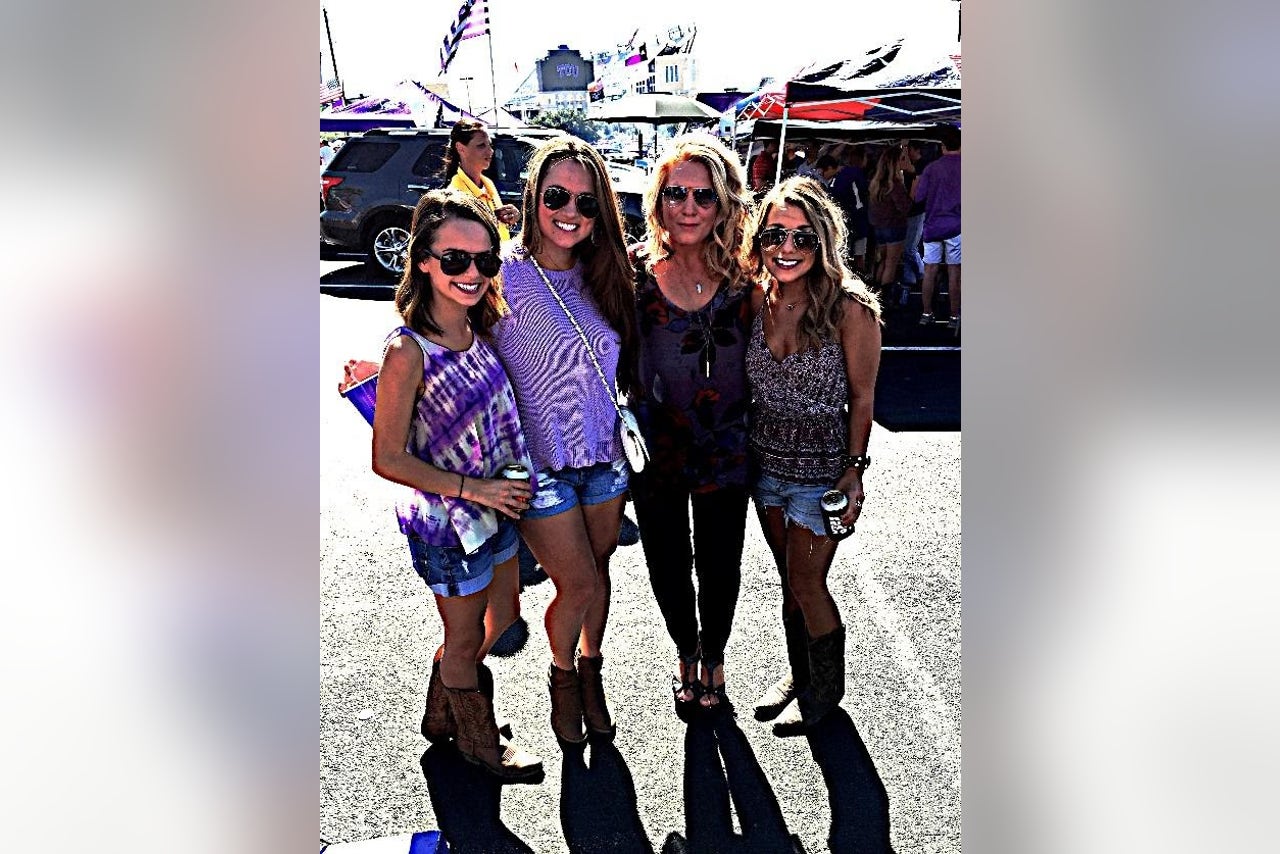 My best friend in Fort Worth, Annie, said she would be giving me the complete tailgating tour since she's a TCU alum. Per usual, she didn't disappoint. We hopped from one great tailgate to the next and ended up at the Kappa Sig tailgate, who were "hosting" my tailgating for the weekend. At TCU they don't have your typical fraternity/sorority houses so they throw these big tailgates complete with trailers filled with TVs, a large grill, catered food, and the all-important open bar. Thanks Kappa Sig for your hospitality.

I think the biggest difference in SEC Game Day and Big 12 Game Day is the girls' outfits. Attire ranged from full on SEC-esqe sundresses to TCU t-shirts. The common denominator though? Boots. Because Texas Forever. 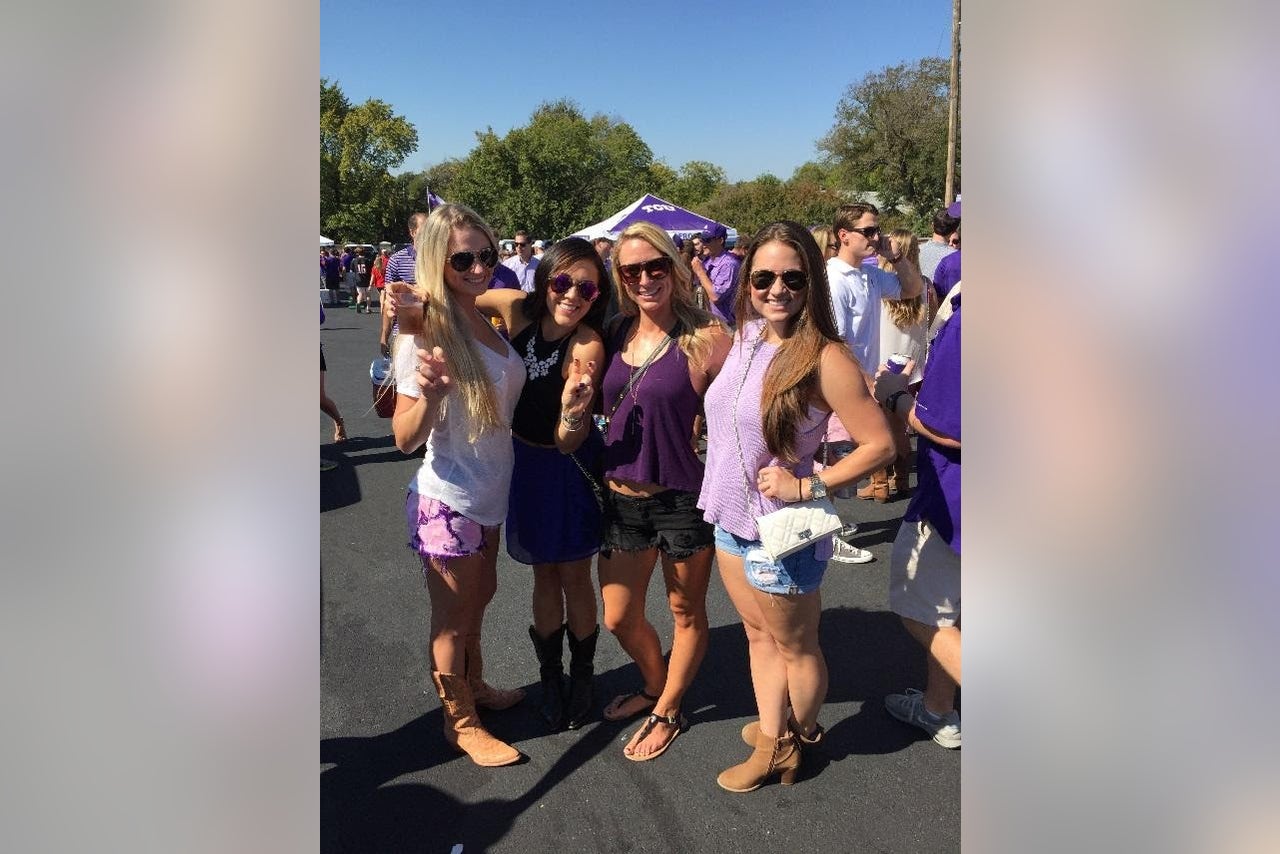 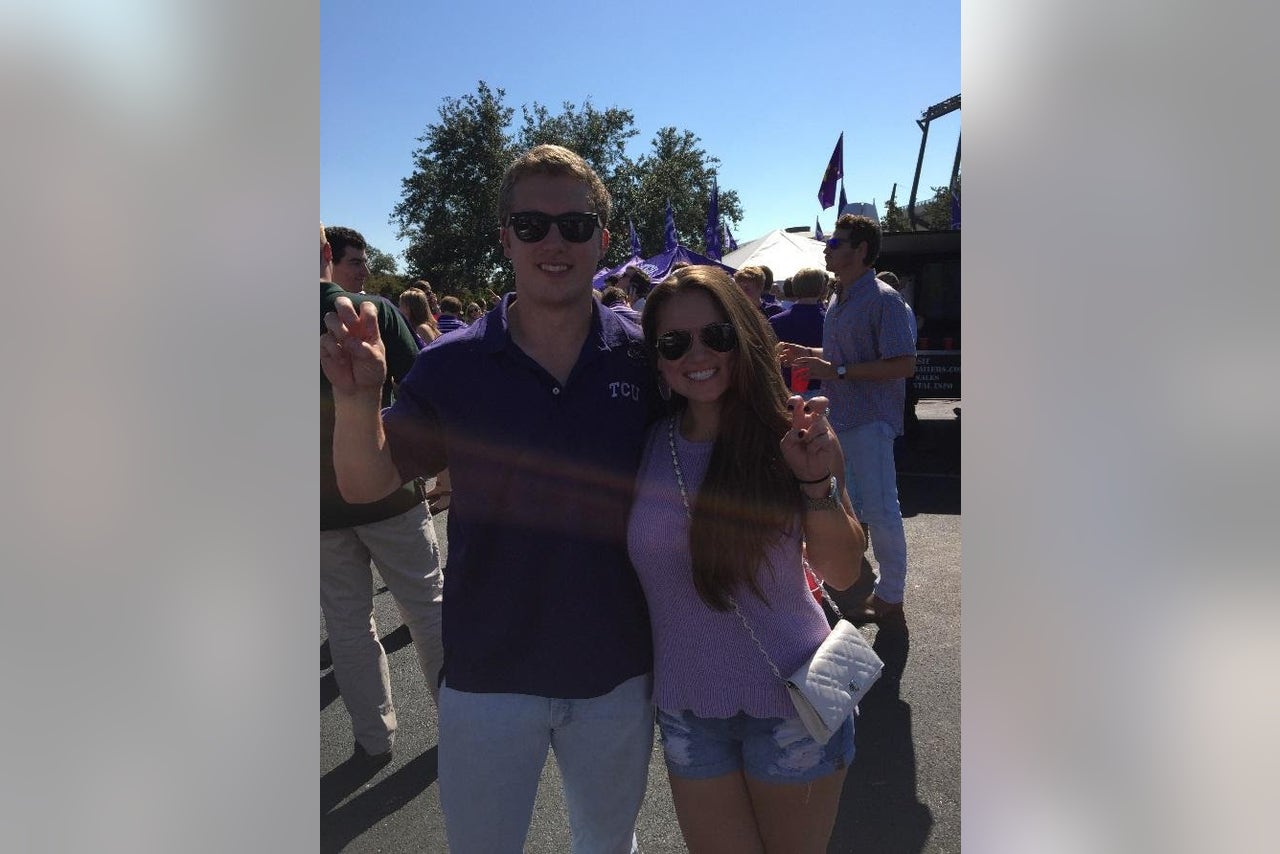 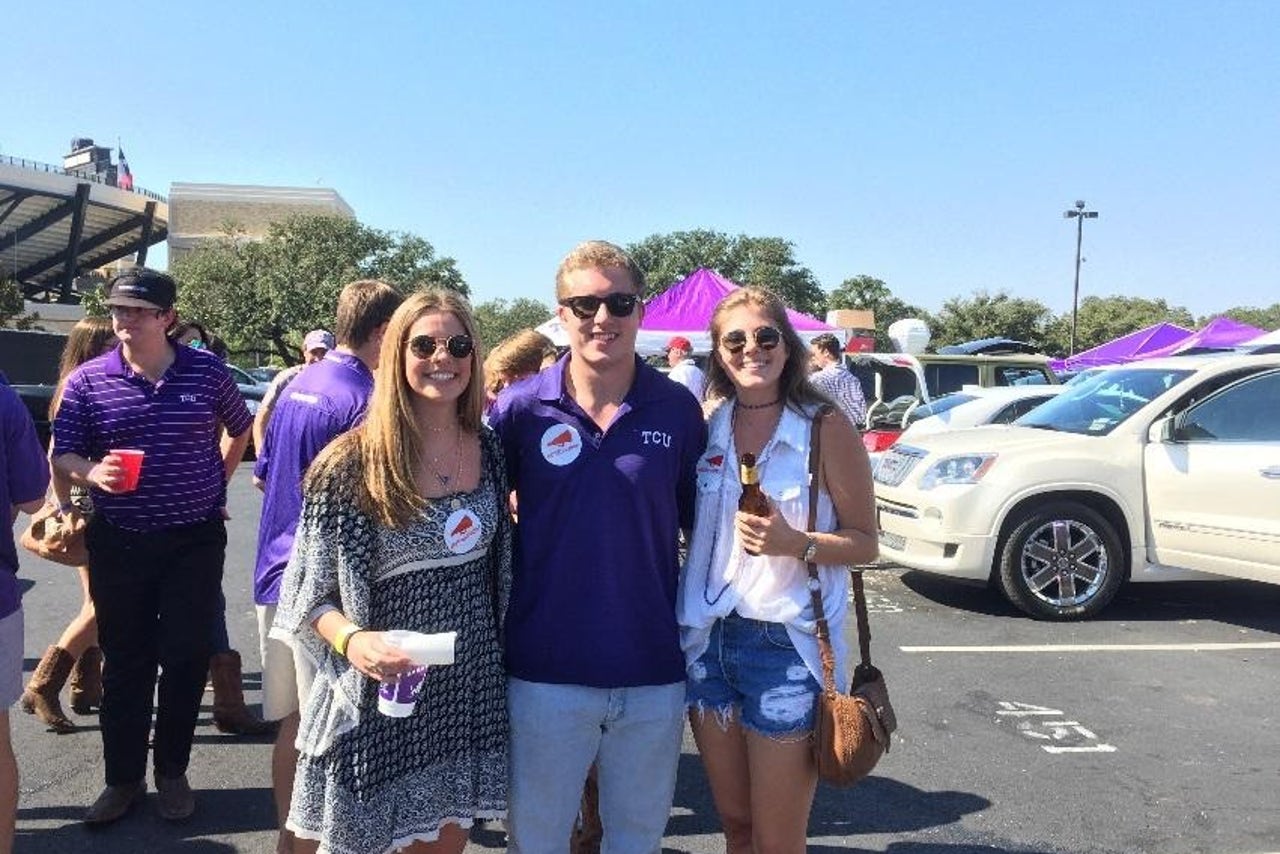 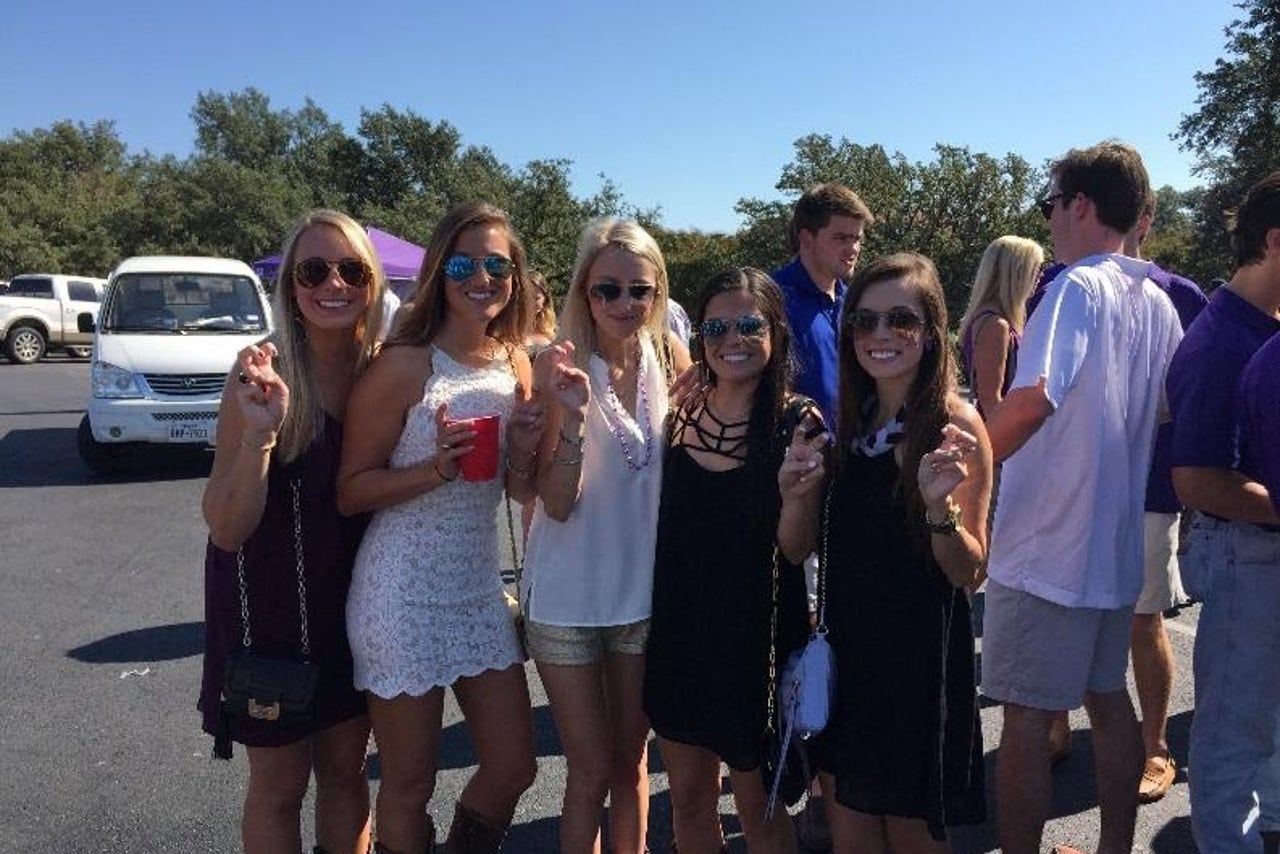 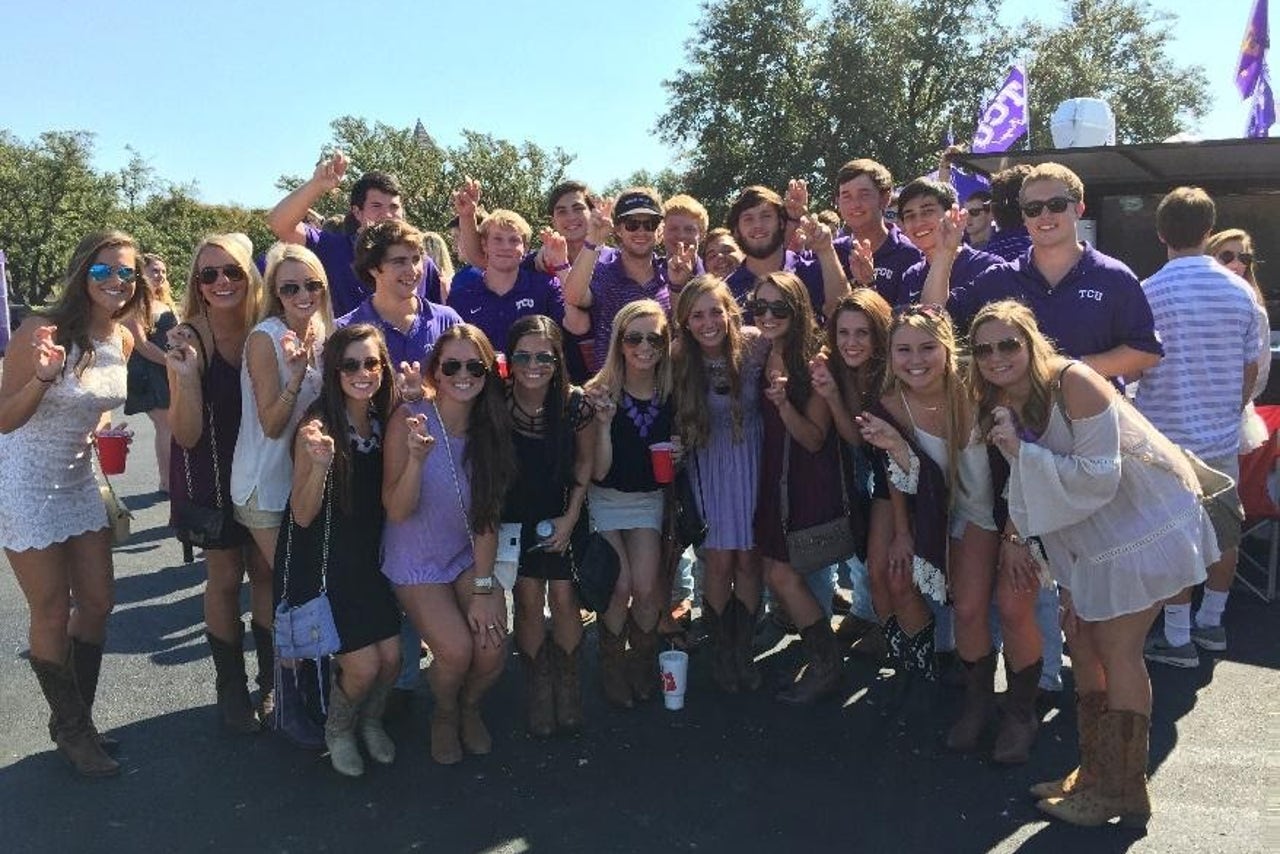 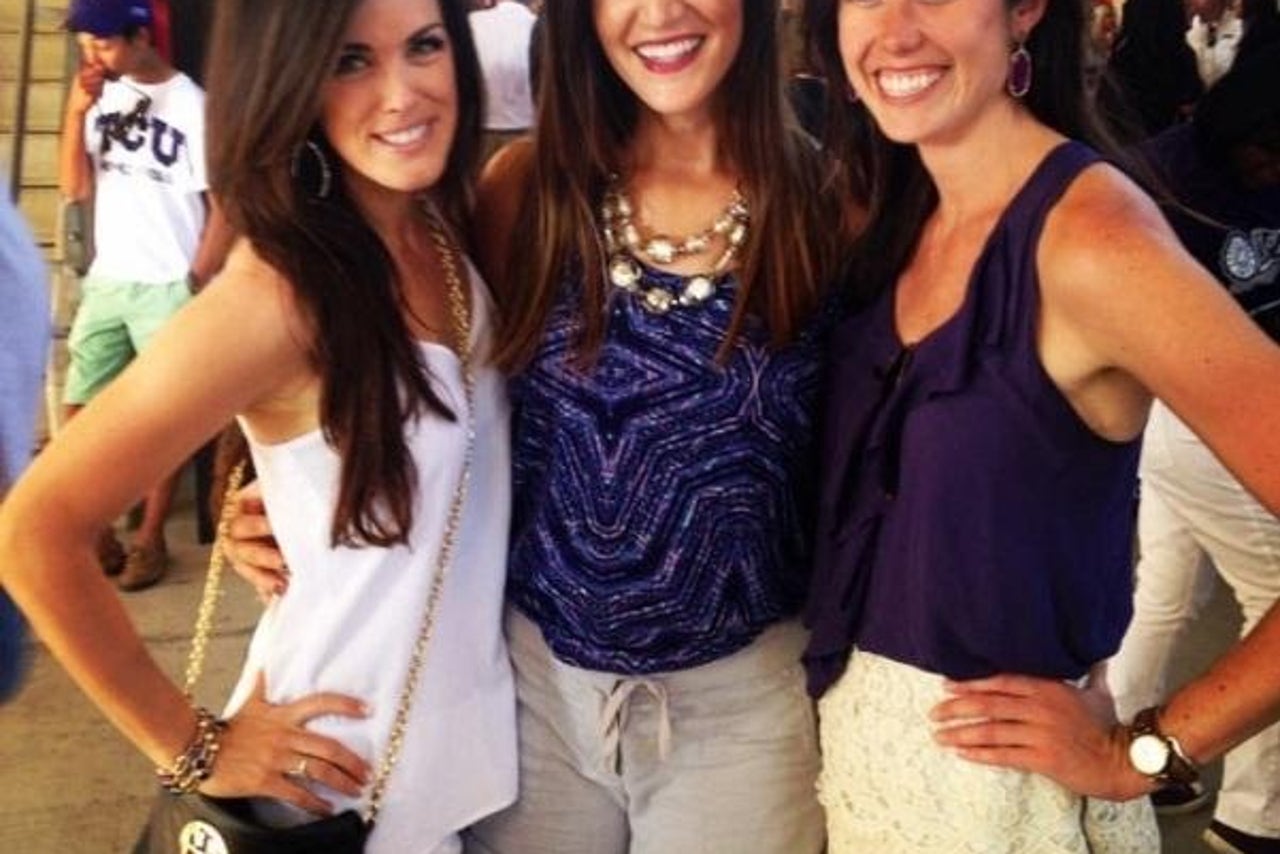 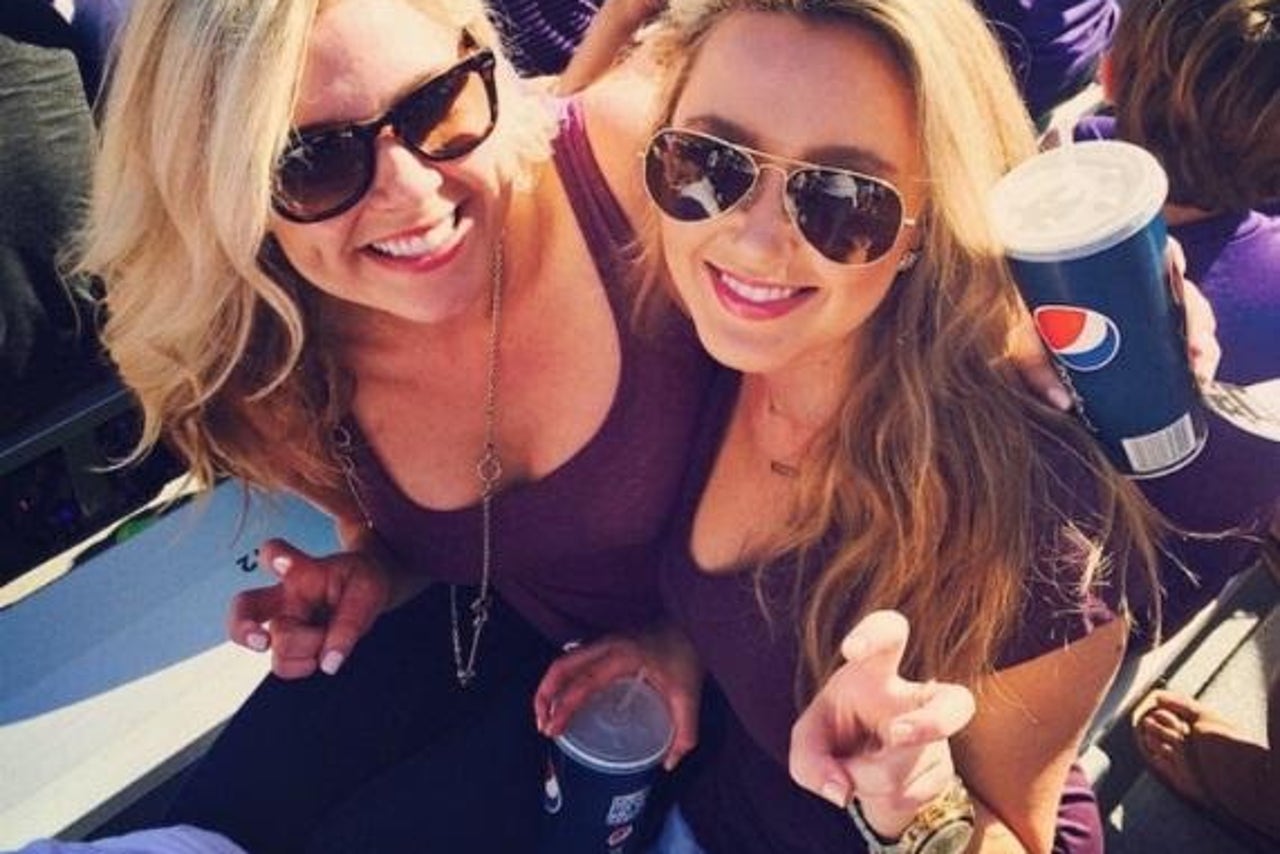 After my tailgating fun, it was off to meet everyone's favorite former Purdue long snapper, John Finch. Finch works for TCU's division of IMG now and was kind enough to get me a field pass and give me the full in-game tour. He knew what I really cared about though - KLIFF KINGSBURY. Everyone wanted to see him; there wasn't a time when he was nearby that some Trina wasn't taking a picture of him. It was so obvious that when we went over to the Texas Tech sideline in the first quarter, before the game got ugly, the POLICE OFFICER said, "I know what you want to do. I'll walk you over there," and escorted me to get action shots of Kliffy K himself. Ladies, he is more attractive in person and from the pep talks I overheard he's just as cool as he seems. Seriously. 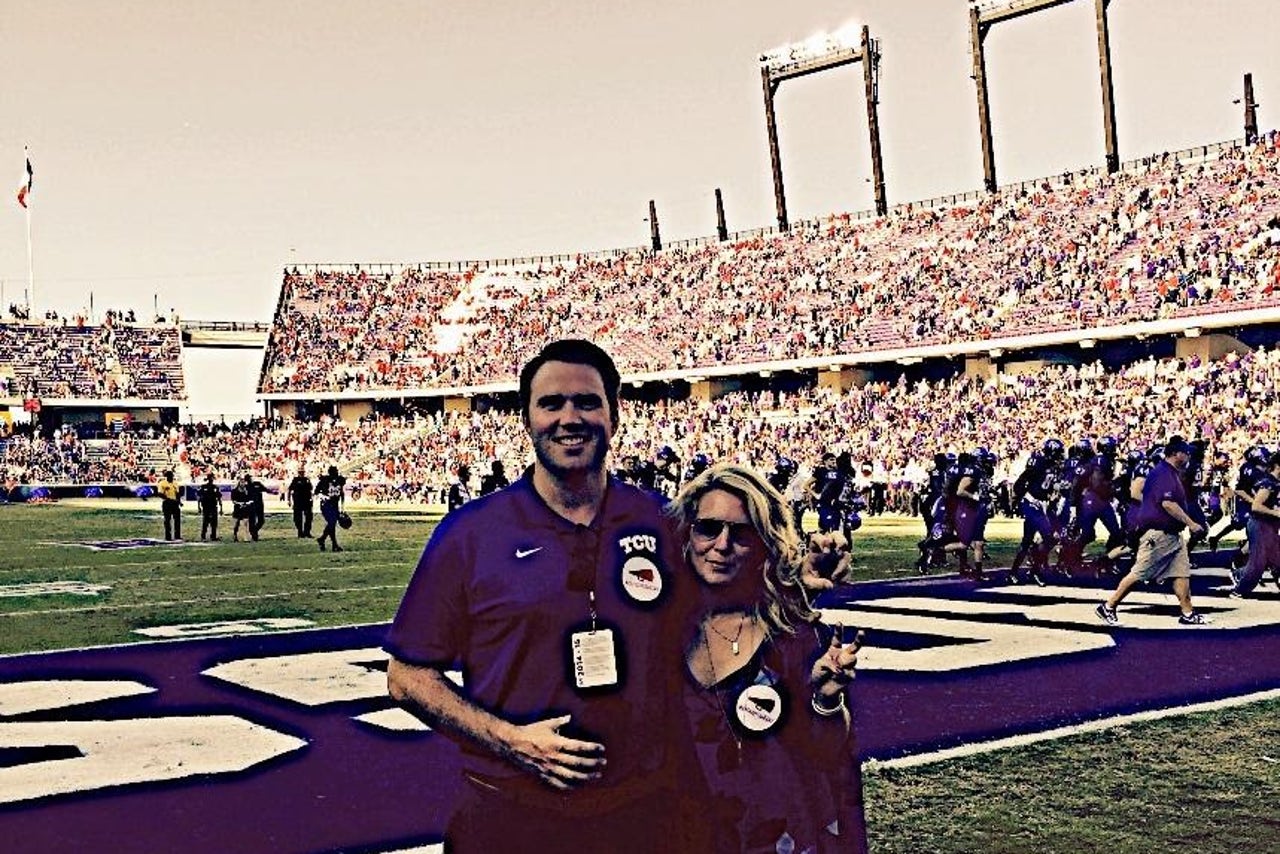 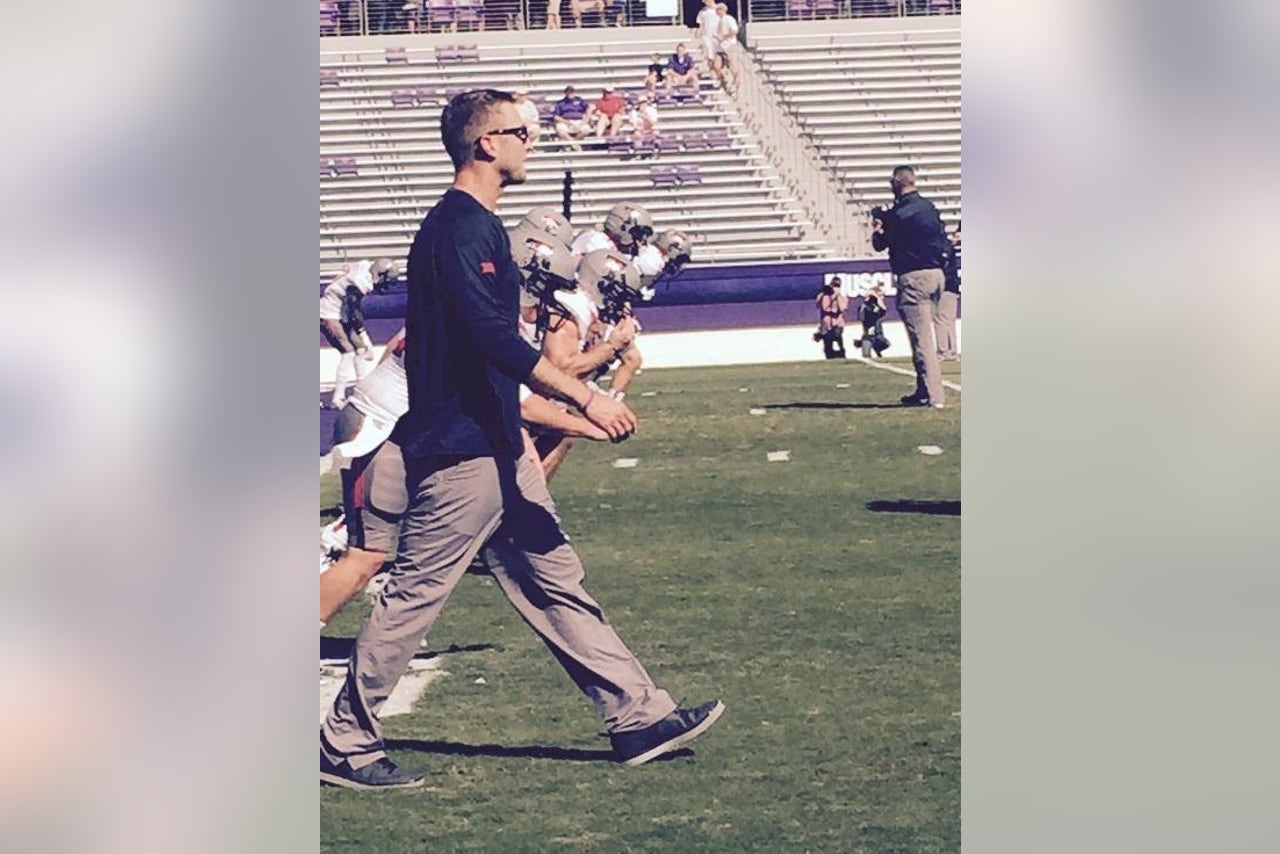 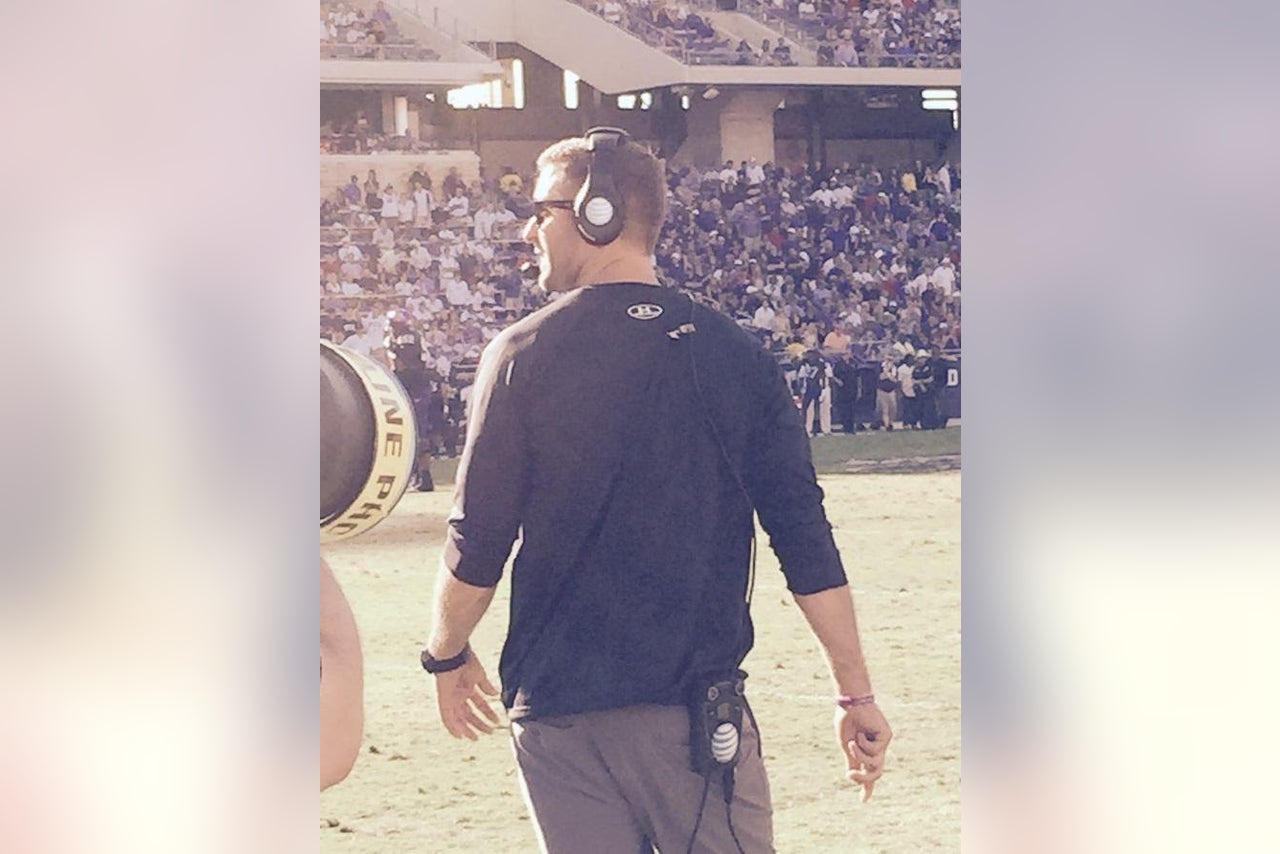 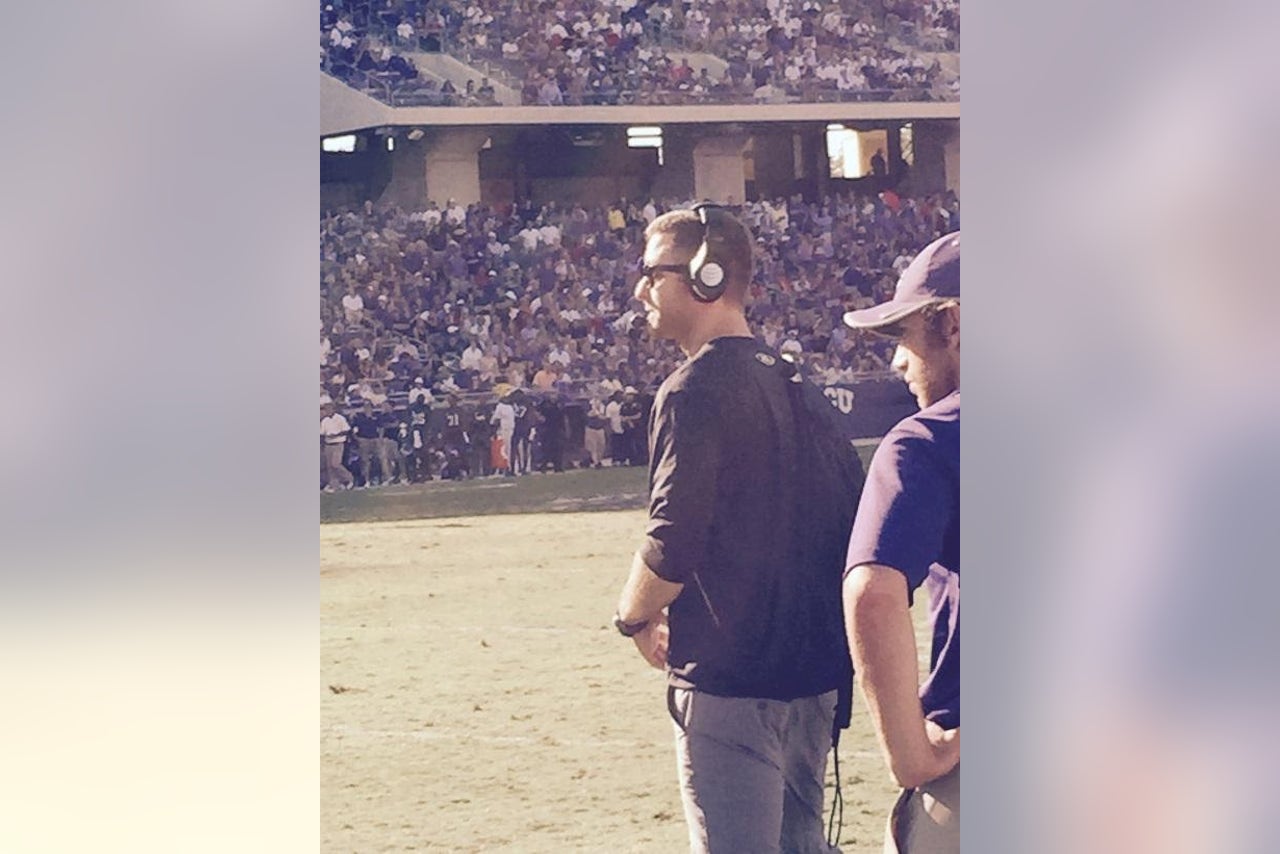 How cool is Kliff? He's got the entire staff Texas Tech staff wearing Ray-Bans now. They are the most attractive football coaching staff in the country. EASILY. Even TCU fans love him. He kind of melts your heart when he gets excited for his guys like with the TD they scored on their first possession, which I may have jinxed by texting Todd Fuhrman something along the lines of, "Told ya it was going to be a good game." 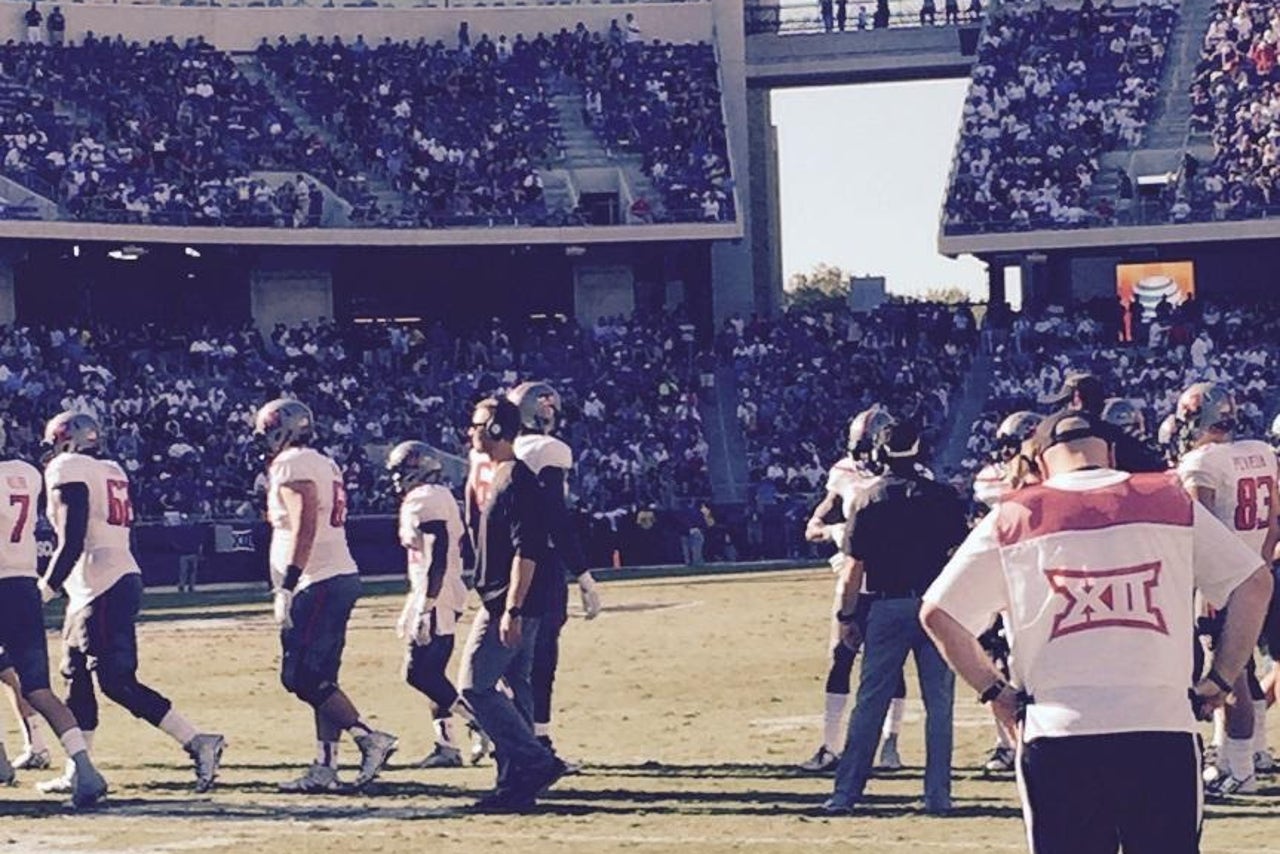 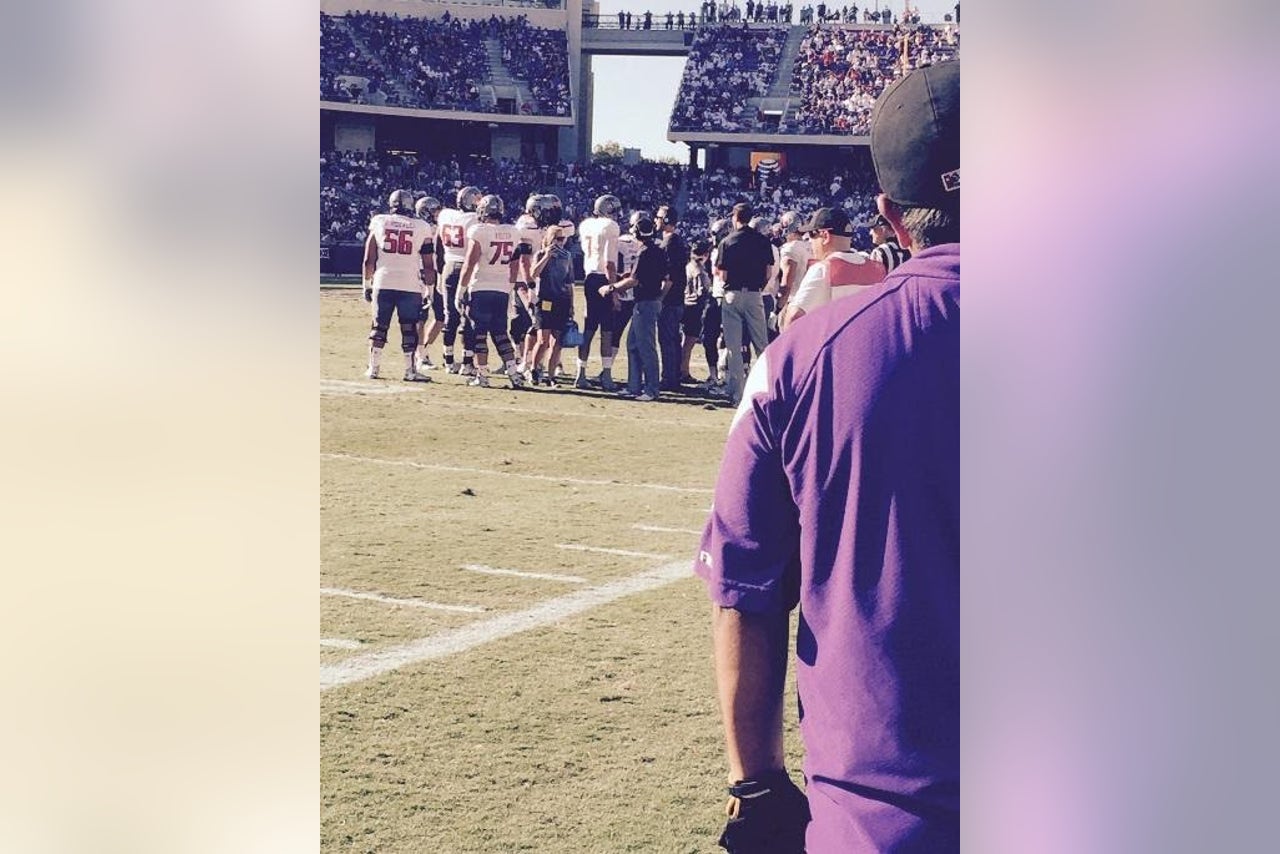 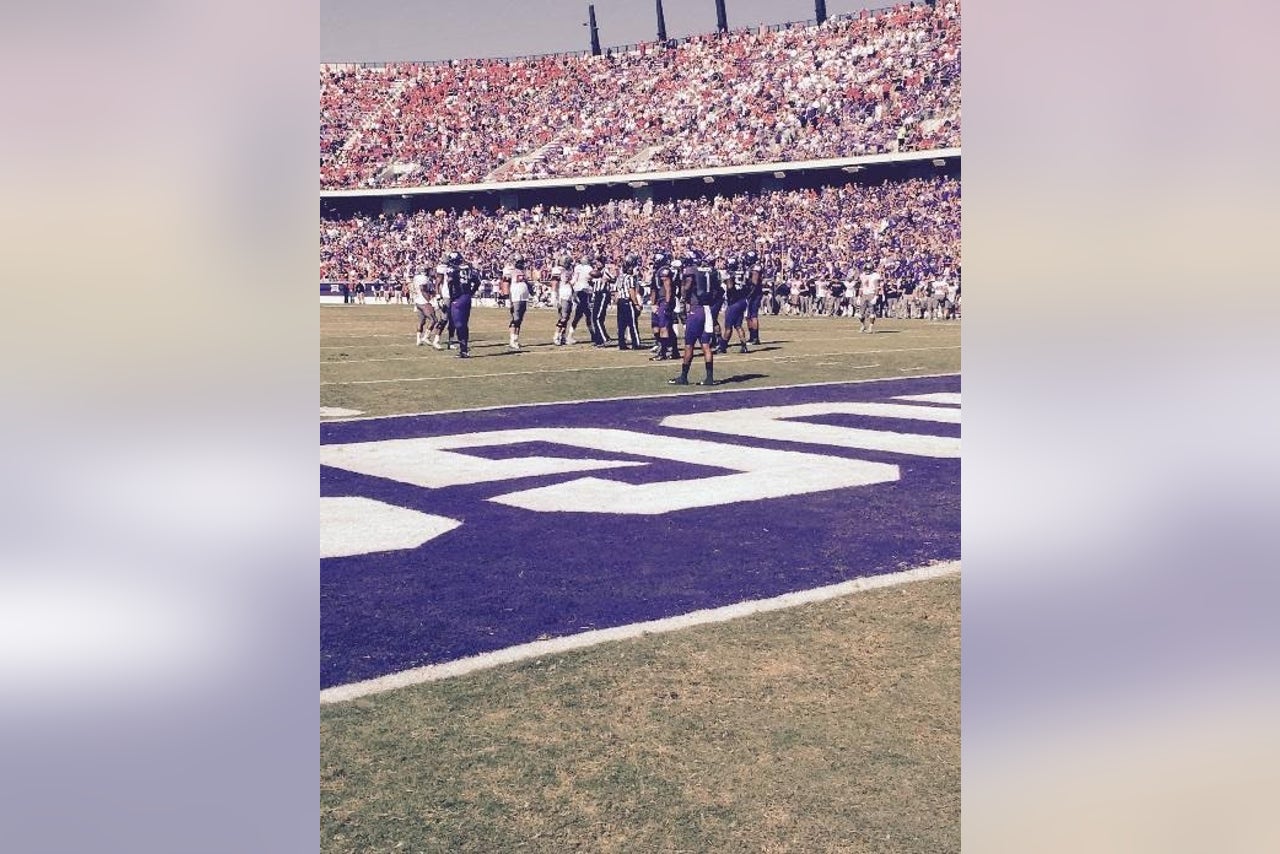 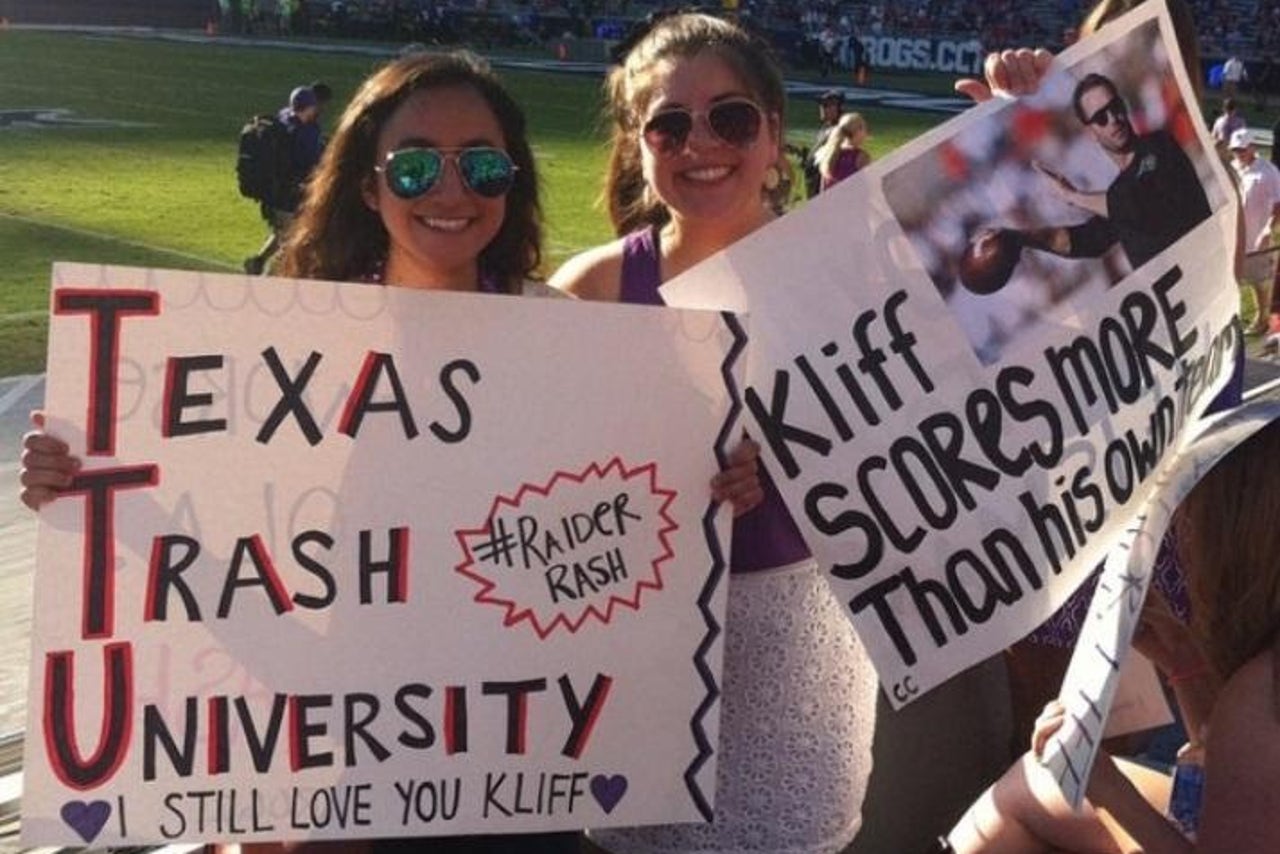 Since the first half was the longest first half in the history of football, I had to scoot out around the third to make it to this debutante ball. Something's just not right about having to leave a college football game early. The neat thing about it though is that all of these people from Fort Worth who came home for the deb ball also went to the TCU game. TCU unites the community, and they've really capitalized on this and made game day a family friendly event. There's something for everyone.

I was informed that the PA announcer at the game made three big announcements during this season's college football Red Wedding:

Now, next weekend, I'm opening it up to you guys. Where should we go? Send me your suggestions @mattielouoktc