Frederik Andersen has adapted well to his Southern California surroundings.

Most days after practices, he hangs out in the hallway of the Honda Center barefoot, wearing practice shorts and a sweatshirt. His red hair is as effortlessly messy as his two-day old red scruff and his demeanor is just as easy.

Typical So Cal, Andersen, who is from Denmark, looks like he could go straight from the ice to the beach.

"It's a little different than home," he said. "But I like the sun and being able to walk around in shorts."

Often times this season, the Anaheim Ducks goalie has made his play on the ice look just as easy as a day at the beach. He's weathered the swells of the league's top offenses and finished the regular season with 35 wins, which is seven more games than he played in the NHL last season.

The Dane broke club and league records, reaching 50 wins faster than any other goalie in history. At one point, he started 20 consecutive games — and won one during that stretch while stricken with a flu so nasty that former teammate Ben Lovejoy joked with reporters that he wouldn't do postgame interviews until everyone washed their hands so he didn't catch it too.

Andersen appeared poised to be the Ducks' goalie of the future, the latest in a tradition of solid No. 1 goaltending. He was rolling after that stretch of 20 games.

"There's another level of intensity and battle. Everything is on the line." - Cogliano talks playoffs and more: http://t.co/TKOOEo0wvV

"It's obviously a huge difference playing 28 games last year and over double that this year," he said. "It's part of the learning process. I've been the No. 1 guy almost every night. It sounds easy if you look outside of it but once you try it, it's just different playing once a week vs. 3-4 times a week."

But then, it all came crashing down.

Well, maybe not everything that he had worked for, per se, but a net did, and it was enough to injure his neck and it was enough to take him out for 10 games. Ducks' brass decided that they weren't going to trust the sparsely-used Ilya Bryzgalov in his absence and John Gibson returned from his exile in the AHL.

The rookie started playing well in the NHL and it looked as though Freddie and Gibby were goalies No. 1 and 1A. There was a plan in place to split time between the two talented, young netminders.

Andersen remained calm, but the signs of fire were beginning to bubble beneath the surface.

When Gibson went down with an undisclosed injury last week, the decision made itself. Andersen not only feels that he's earned it, but that he's ready to be the No. 1 goalie in a deep playoff run.

"I've shown that I've played a lot this year and look forward to, hopefully, playing a lot again," he said. "I can play for another two more months."

Hockey had its first real introduction to Andersen a year ago, when he backstopped the Ducks' to the Western Conference semifinals. Sure, the tensions between the coaching staff and former No. 1 goalie Jonas Hiller had broken down, but the team's hand was almost forced as Andersen succeeded.

Coming into this season, Andersen was determined to surpass Gibson in training camp. This role, his goalie coach Dwayne Roloson says, is the one he's always wanted.

"Will and want," Roloson says. "He set out from when he first got here to be the No. 1 in this league and he's not satisfied with that. He wants to keep on getting better every day. It's at, almost, to the point, where we've got to pull back teaching-wise because he wants so much information. For him, it's the will and want, the desire to get better every day."

Andersen always wanted to be a goalie. His father, Ernst, was a goalie for the top league in Denmark, Metal Ligaen, but he didn't want his son to play goalie. Yet somehow, Andersen always found himself between the pipes before practices, challenging his teammates to get pucks past him.

"I just felt like it would be fun," Andersen said. "It looked really fun to be in net and I just kept going in there. I was in skating gear when practice was starting. Finally, my dad let me. Not at first, he wanted to make sure that I could skate well and that I could learn the game a little bit." 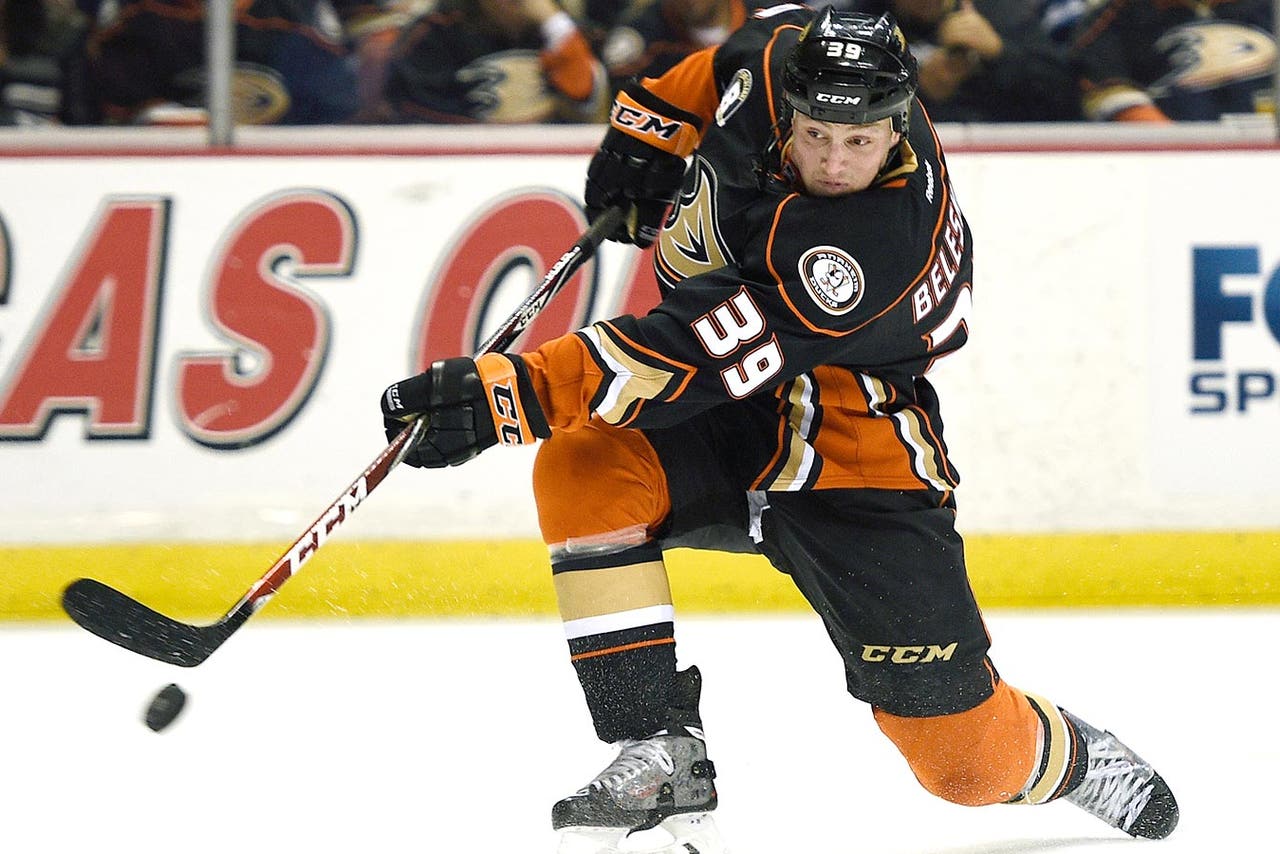 Andersen only played forward until he was about 10, but those fundamentals have stuck with him. He's a superior puck handler — Lovejoy says the best puck-handling goalie he's ever played in front of — and a good skater.

Andersen has always been a standout prospect, but he wasn't the phenom like Gibson. He needed to lose weight and although his development was steady, he didn't develop at a lightning quick pace like Gibson seemed to.

So he put in the necessary work. He hired a trainer and stayed in Orange County last summer to work out. He put in more work with in-house trainer Sean Skahan during the season.

Maybe California has rubbed off on him, or maybe it's all the work that Ducks' coaches Roloson and Trent Yawney, have put in with Andersen. Because that laid back attitude is something that he's developed over time.

He used to have a temper that matched his hair.

"I had a real temper when I was young," he said. "I kind of grew out of that. Something like that, I was pretty fiery. It comes once in a while. Short temper, a really bad loser. And I still have that, it happens still sometimes."

While the outbursts are somewhat more subdued compared to the stick-slamming tantrums of Kings' goalie Jonathan Quick, flashes of the ginger rage have come out on occasion. Early in the season, after Nashville's Mike Fisher got a stick in his face and no whistle was blown, Andersen mauled him from behind. He's slammed his stick trying to goad a goalie out of his net for a bout more than once this season.

But that competitive desire is healthy when it's controlled. 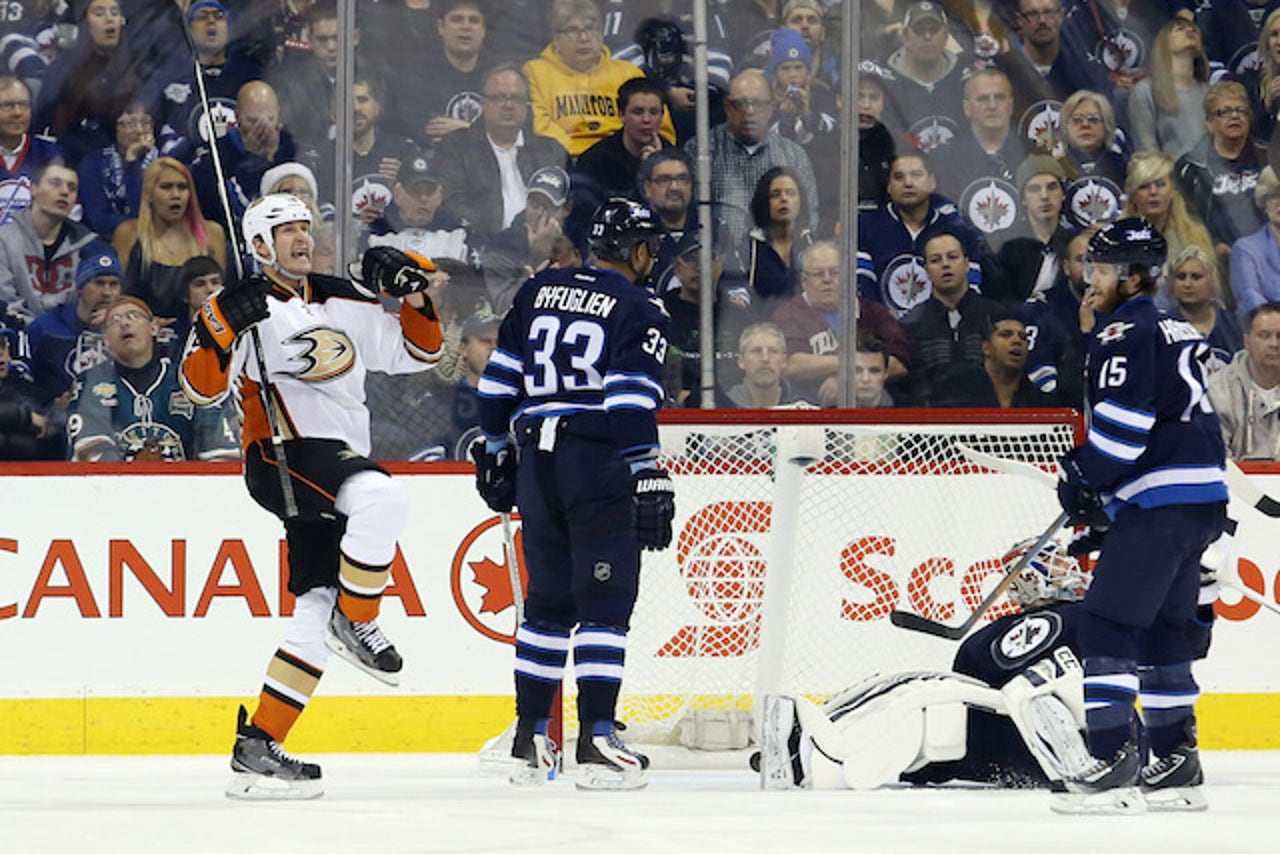 "I wouldn't say he's like me, but he gets pretty fired up pretty quick," Roloson said. "We want him to know that it's OK to have a little bit of emotion, especially in practice, when guys are scoring on him. It's OK, as long as he can refocus and let's focus on the things that we need to focus on to get better. He's been able to control it, but at the same time staying on that edge and playing on that edge of whatever it takes to stop the puck."

It took a fair amount of control on Andersen's part when Gibson was starting so many games down the stretch. But the competition pushed the right buttons.

Andersen looked back on those 20 consecutive games and has been able to draw on his experiences from his breakout season to stay calm and go into this postseason, only his second, with a relaxed, yet confident mindset.

"It's quite remarkable for his age and I think he's a lot calmer right now than he was this time last year, and that's what experience brings you," Boudreau said. "When he's calm, we're calm. He gives you that sense of, 'OK, everything is going to be fine.' I think last year, he was jittery in certain games. He would make the save, but he didn't look as comfortable as he did this year in most of the nights that we saw him play."

A stronger, more experienced Andersen is primed for the postseason.