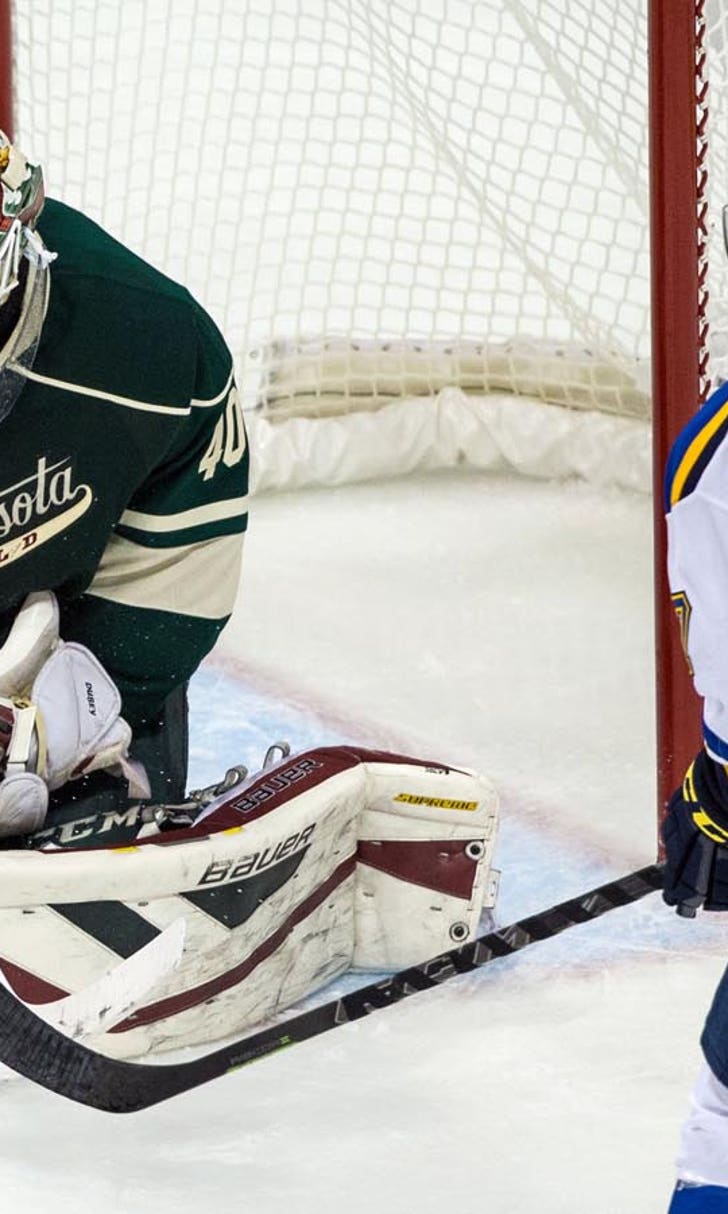 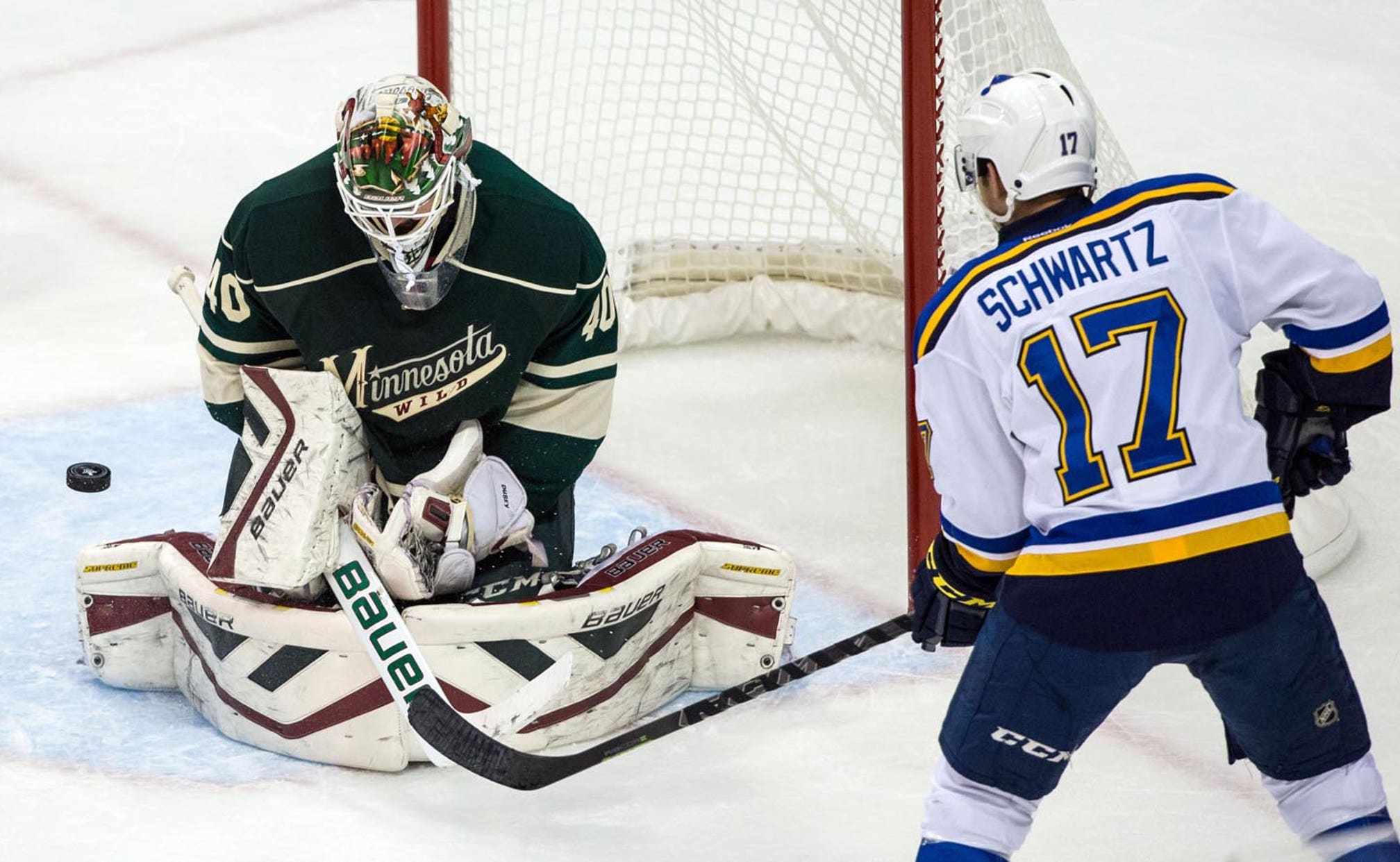 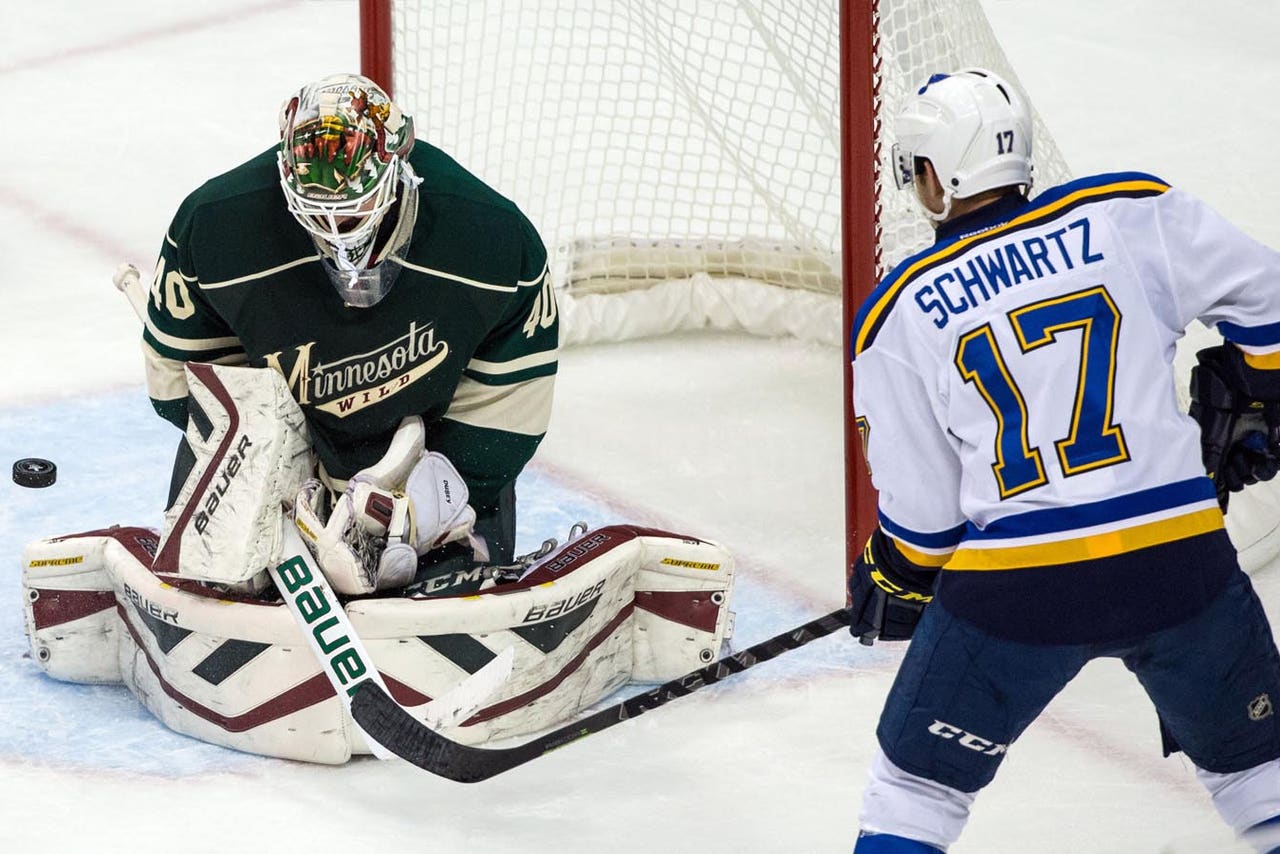 ST. PAUL, Minn. (AP) -- The St. Louis Blues have been busy trying to agitate the Minnesota Wild into costly mistakes.

With a sarcastic smile here and a timely goal there, the Wild have kept their cool and taken the series lead.

Devan Dubnyk made 17 saves, Jason Pominville and Zach Parise scored in the second period and the Wild cruised to a 3-0 victory over the Blues in Game 3 on Monday.

"We're here to play hockey. We're not here to fight and do all that," center Charlie Coyle said. "That stuff after the whistle doesn't win you games, so we're just focused on playing our game and playing it smart."

Mikael Granlund had two assists, Nino Niederreiter added an empty-netter and the Wild had the edge in every way, without being drawn into a single trip to the penalty box.

Steve Ott was ejected in the closing seconds, his second game misconduct call of the series, and has 22 penalty minutes in three games.

"This is similar to what they did in Game 1, checked us really hard," Blues coach Ken Hitchcock said. "And they got us to crack."

St. Louis goalie Jake Allen stopped 21 shots, the over-capacity crowd taunting him with chants of his last name throughout the game, but the Blues lost on the road in the playoffs for the ninth straight time.

"We let him down," Blues defenseman Barret Jackman said, adding: "He made some big stops for us, but when you put a big goose egg up on the board it's hard to win."

Game 4 is in Minnesota on Wednesday. Then the series shifts south to St. Louis on Friday for Game 5.

"We were expecting our crowd to be a lot like they were, and our guys feed off that," Wild coach Mike Yeo said, adding: "That's got to be our game. That's got to be the way that we're playing. We're built around speed."

After getting a hat trick in the Game 2 victory at home for the Blues on Saturday, Vladimir Tarasenko was held without a shot on goal, just as he was in Game 1.

Meanwhile, the Wild's big-money scorers came through in the middle of the game after some big rebounds allowed early by Allen weren't converted.

Granlund put a slick move on Tarasenko and sped past the prolific right wing on the rush. His shot was blocked by Carl Gunnarsson, but the ricochet went to Parise, who threaded a perfect pass to Pominville for the simple tap-in at 14:08.

On their next shift, Parise was tied up with Blues defenseman Kevin Shattenkirk in the slot when he managed to snap the puck past Allen for the two-goal lead with 3:47 remaining in the second period.

Granlund nearly matched his line mates when Parise and Pominville set him up with a wide-open net. The young center was too fast to score, just a little too deep, and his shot hit the near post and bounced back.

"Their team speed, when you let them have time and space to make plays and zip the puck around, it's dangerous," Blues captain David Backes said.

The Blues had to be happy at the first intermission, having kept the game scoreless for the first 20 minutes despite being outshot 9-4, outhit 16-10 and penalized once for a Wild power play. The Blues blocked eight shots in the first period, but Allen was plenty busy.

The intensity between these similarly constructed Central Division opponents has been palpable, sure to heighten the rivalry once it resumes again next season.

The Wild have deftly avoided the penalty goading the Blues have tried, another sign of the confidence and discipline this team has displayed since their mid-January turnaround.

Jason Zucker, one of several Wild players Ott has tried to provoke in this series, irritated Shattenkirk with a mild whack at Allen as he skated by in the first period. Shattenkirk gave Zucker a light shove, and Zucker stuck his tongue out with a big, sarcastic smile.

Ott attempted a check on Jonas Brodin in front of the Wild bench in the second period, and Matt Dumba mischievously tugged on Ott's stick, riling up the veteran center as he returned to the play.

"We prepped for this, we expect it and I think our guys have done a good job of handling it so far," Yeo said.

Notes: This was the third playoff shutout in Wild history.  . . . Backes led the Blues with three shots on goal.  . . . Sean Bergenheim and Justin Fontaine replaced Jordan Schroeder and Matt Cooke on the Wild's ever-changing fourth line.  . . . The Blues most recently won in the playoffs on the road on April 19, 2012, at San Jose. They're 2-17 in their past 19 road playoff games.