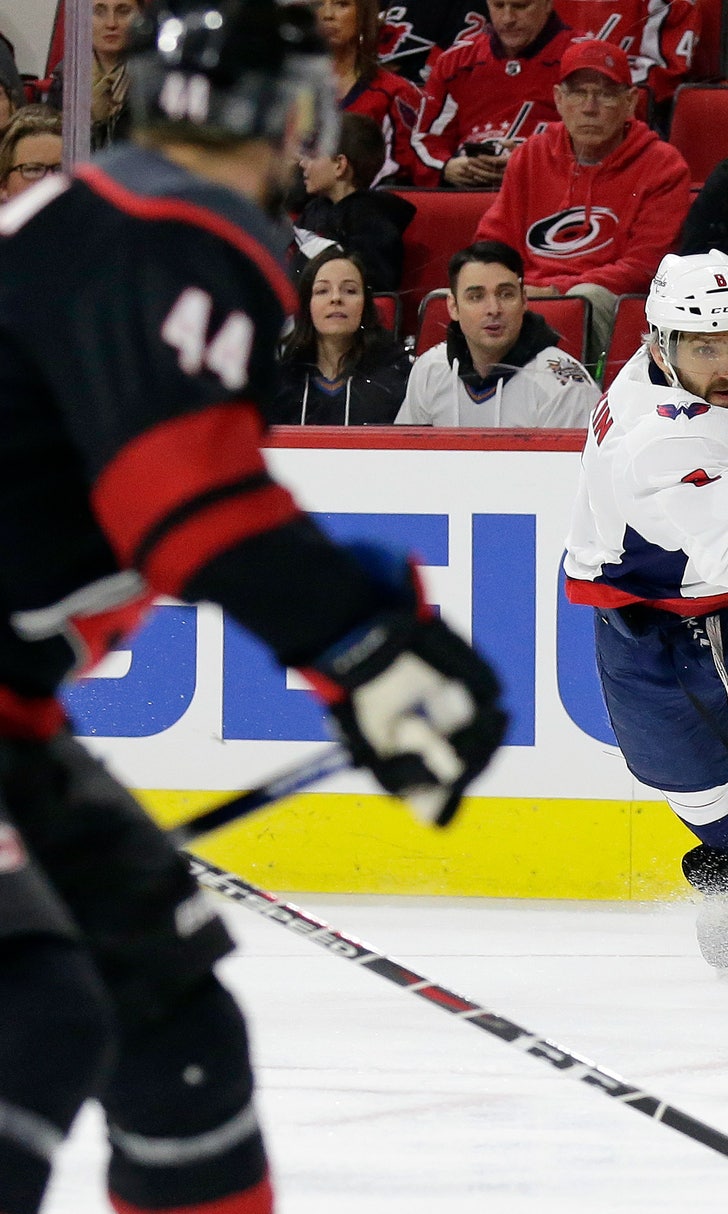 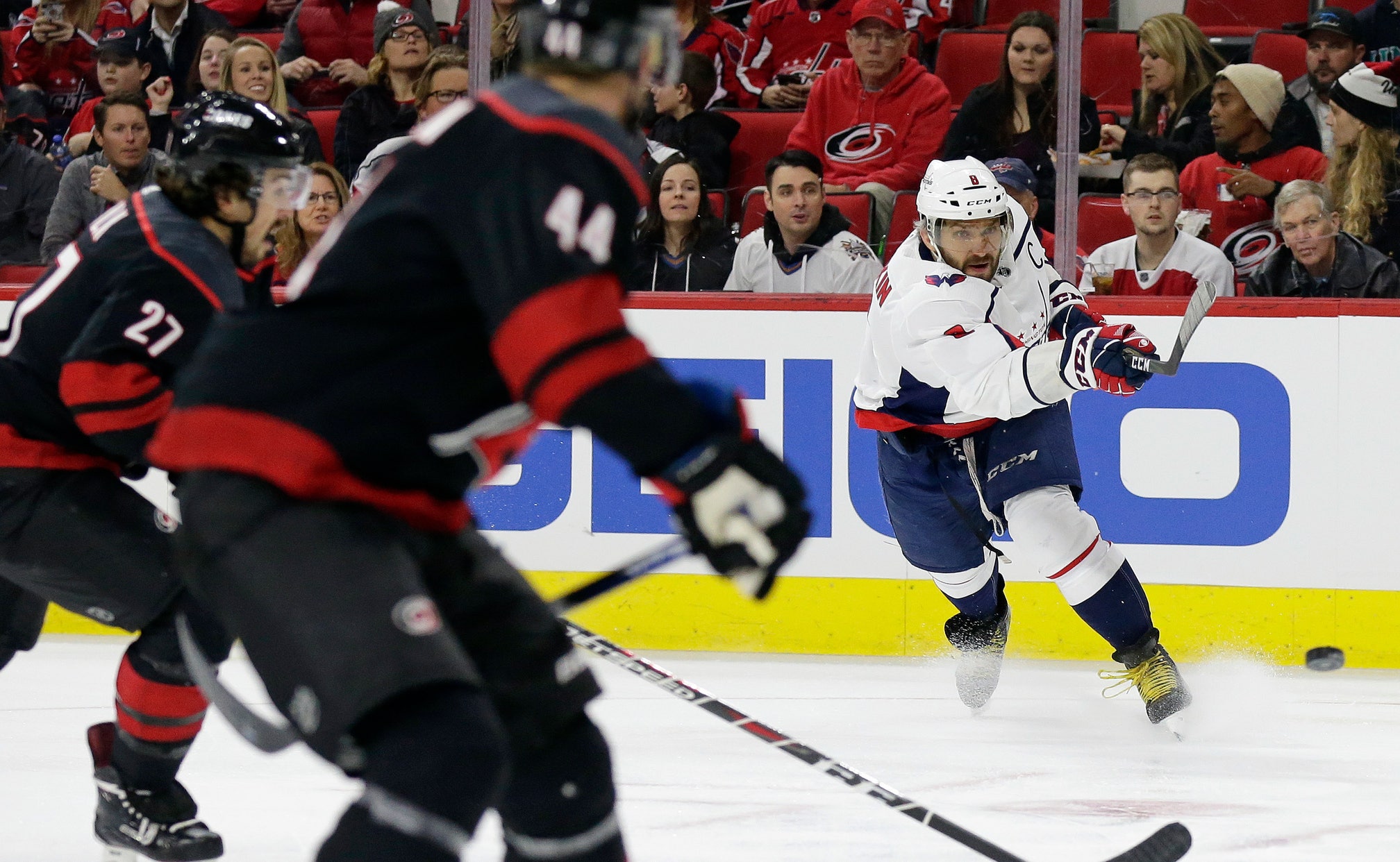 RALEIGH, N.C. (AP) — Alex Ovechkin scored goals in bunches once again — until the shootout. Then it was up to Jakub Vrana to clinch an important victory for the Washington Capitals.

The three-time MVP had his second consecutive hat trick, Vrana scored in the sixth round of the tiebreaker and the Capitals beat the Carolina Hurricanes 6-5 on Friday night.

Ovechkin's three goals gave him an NHL-best 28 this season and nine in his last five games. His 13-game point streak matched his career high set in 2006-07.

"I don't know what to say — I just try to do my job," Ovechkin said. "Everybody tries to score goals, everybody wants to score goals. In this league, it's hard to do that. I feel like I play with great players. They set me up, and I just have to do my job."

Tom Wilson and Travis Boyd also scored for the defending Stanley Cup champions, who have won 11 of 13. The Metropolitan Division leaders got three goals in a 5:42 span of the second to tie it at 4, a burst capped when Boyd redirected in John Carlson's shot with 1:41 left in the period. It was the Capitals' largest deficit overcome in a victory this season.

"You still have to figure out how you're going to win with the group that we presently have in the locker room, and obviously the majority of our roster was part of what we were able to accomplish last year, so you have a little bit of I'd say equity on that one," coach Todd Reirden said. "At the end of the day, you have to find ways to do it with a new group in there, and we're doing it with a four-line attack."

Justin Williams scored the tying goal with 6:12 remaining, and Sebastian Aho had two goals and two assists for Carolina.

Teuvo Teravainen had a goal and two assists and Jordan Martinook also scored for the Hurricanes, who had three power-play goals but have lost three straight and six of seven. They have allowed 15 goals — not including the tiebreaker in this one — during their last three losses.

Dougie Hamilton and Nicklas Backstrom both scored in the fourth round of the shootout. After Braden Holtby stopped Brock McGinn in the sixth round, Vrana ended it with a wrist shot to Scott Darling's glove side.

Holtby finished with 22 saves for the Capitals. Darling made 24 stops in his first start with Carolina since Nov. 24.

Ovechkin put Washington up 5-4 with 10:11 remaining, blasting a one-timer from the left circle past Darling on the power play, before his former teammate with the Capitals — Williams — tied it nearly four minutes later with a backhand.

Ovechkin also scored on Washington's first shot of the game, another one-timer from the circle at 3:56 of the first. His second goal came with some controversy, with the Hurricanes unsuccessfully clamoring for an interference penalty on Jonas Siegenthaler for his hit on Hamilton that cleared the way for the Capitals' captain.

"The game turned on that play," said Carolina coach Rod Brind'Amour, who said an official told him he didn't see interference. "Then the momentum got going, and they cranked it up."

Aho, who scored on a short-handed breakaway in the first, had his third career four-point game and extended his point streak to four games. He has 15 points (seven goals, eight assists) in nine career games against Washington, and he and Teravainen scored power-play goals 2:02 apart in the second period that seemingly put Carolina in control.

Aho scored his second goal on a one-time rocket that got by Holtby, making it 3-1 at 4:39, and Wilson — in his first game back from a concussion that cost him three games — took an interference penalty for blind-siding Andrei Svechnikov with his shoulder 24 seconds later. Teravainen then made it a three-goal game with his wrist shot from the circle at 6:41.

"We had plenty of time," Ovechkin said. "We just had to play our game."

NOTES: Washington C Nic Dowd had a career-high three assists, and Carlson had two. ... The Capitals have scored at least three goals in 13 straight games. ... Carolina has allowed at least four goals in four of its last five games. ... Wilson and Ovechkin both rang the post. ... Siegenthaler set up Ovechkin's first goal for his first NHL point.