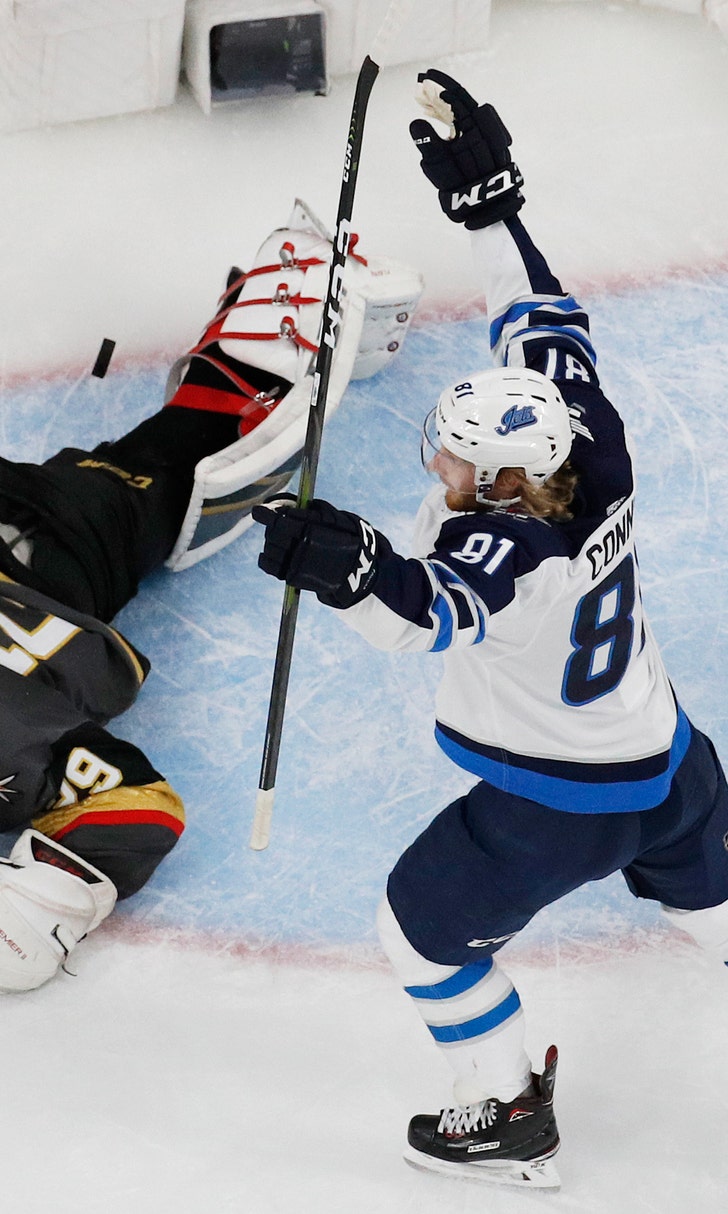 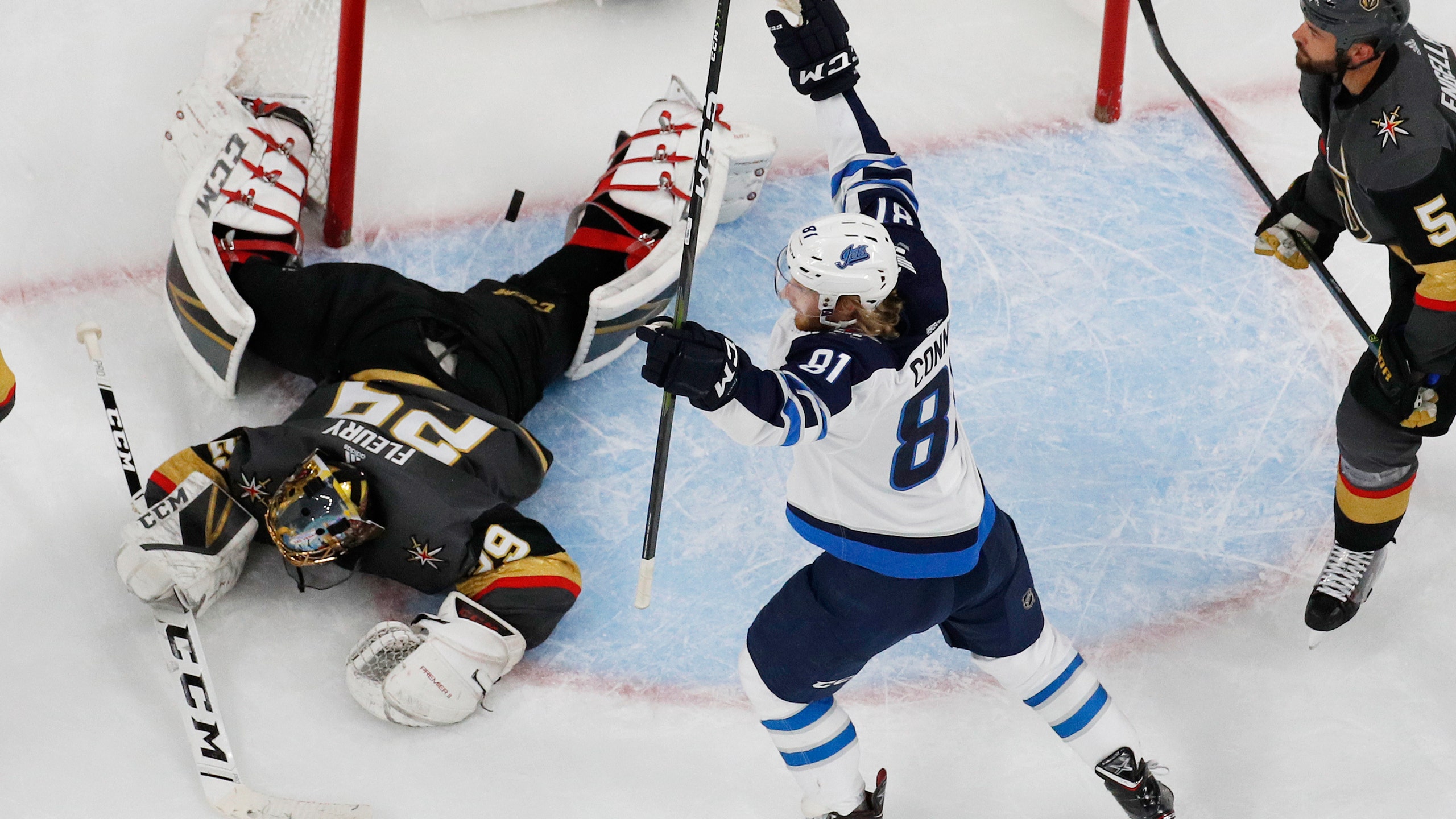 LAS VEGAS (AP) — Patrik Laine hadn't scored a goal for Winnipeg in 15 games. He ended that drought in a big way Friday night.

Laine contributed a pair of power-play goals and Connor Hellebuyck made 31 saves to lead Winnipeg to a 6-3 win over the Vegas Golden Knights, the team that eliminated the Jets from last season's Western Conference Final.

The Central Division leaders entered 2-4-2 in their previous eight games but rebounded from an embarrassing 7-1 loss at Colorado on Wednesday to improve to 12-3-2 against Pacific Division opponents this season.

"I think there's always (special) meanings when we're playing," said Laine, whose 27 goals rank second on the team. "But especially, we had to win these games. We lost a couple of huge games here last playoffs so we needed to kind of win this one. After the game in Colorado, we needed a good bounce-back and I think we did that."

The victory was Paul Maurice's 685th as an NHL coach. He passed Pat Quinn for sole possession of eighth place on the career list and is seven wins shy of tying Dick Irvin for seventh.

The high-flying Jets, who average 3.35 goals per game, sixth-best in the league, scored more than three for only the second time in nine games. Vegas, meanwhile, allowed three or more goals for the 14th time in 17 games.

Marc-Andre Fleury made 23 saves. He has lost five in a row and eight of his past 10 starts, allowing 24 goals over his last six games.

"We just don't play for 60 minutes. We don't work," Marchessault said. "Our power play's not working, and they cash in a couple of goals on their power play. Normally we always have more power plays because we work harder and we skate, we're faster, and that's not what's happening with us right now."

Winnipeg, which has the league's fourth-best power play, was 2 for 4 with extra men, converting 1 of 3 with a 5-on-4, and the lone time it had a 5-on-3 advantage. Vegas, which owns the league's second-best home penalty kill and ranks third in the NHL with just 7.05 penalty minutes per game, was 9 for 9 over the previous three games when down a man.

"There's no excuses (for) not working," Marchessault said. "Everybody has control of how you're going to work in a game. It's not only one or two guys, it's everybody. The only guy that probably works hard since the beginning of the year is Cody Eakin. Maybe we should learn a little bit more from him."

Ehlers wasted no time in his first game back after missing 20 with an upper-body injury, as he buried a rebound at the doorstep 56 seconds in to give Winnipeg the early lead.

Connor made it 2-0 just 32 seconds later when he beat Fleury top shelf with a quick shot over his left shoulder.

Bellemare's goal late in the first period gave Vegas some momentum heading to the dressing room, and Theodore tied it midway through the second.

But just as the Jets opened the game with two quick goals, they ended the second period with a pair in 27 seconds. Laine beat Fleury for a power-play goal and Lowry followed with 3.7 seconds left before the horn to give Winnipeg a 4-2 lead.

Marchessault's goal came eight seconds into the third to make it a one-goal game. But with the Jets enjoying a 5-on-3 power play, Wheeler fed Laine at the left circle for a one-timer to push Winnipeg's lead back to two.

"Team win. Everybody had a piece of that. Everyone did the right things when they needed to," Wheeler said. "We talked about it before the game — everyone was going to have a dirty job at some point in this game and when it's your turn you've got to step up and make the play. From the goaltender out, everyone had a piece of that one."

NOTES: The Jets played minus standout defenseman Dustin Byfuglien for the third consecutive game because of a lower-body injury. He will miss at least the rest of the road trip. ... Wheeler's assist on Laine's first goal gave him his fourth consecutive 70-point season. ... Vegas center Paul Stastny has a point in 17 of his last 24 games (five goals, 17 assists). ... Little's two assists gave him 300 for his career. ... Vegas wing Reilly Smith has a point in six of his last eight games (one goal, seven assists). ... The Jets are 22-4-4 in their last 30 games against Pacific Division foes since last season.

Jets: Play at Arizona on Sunday.