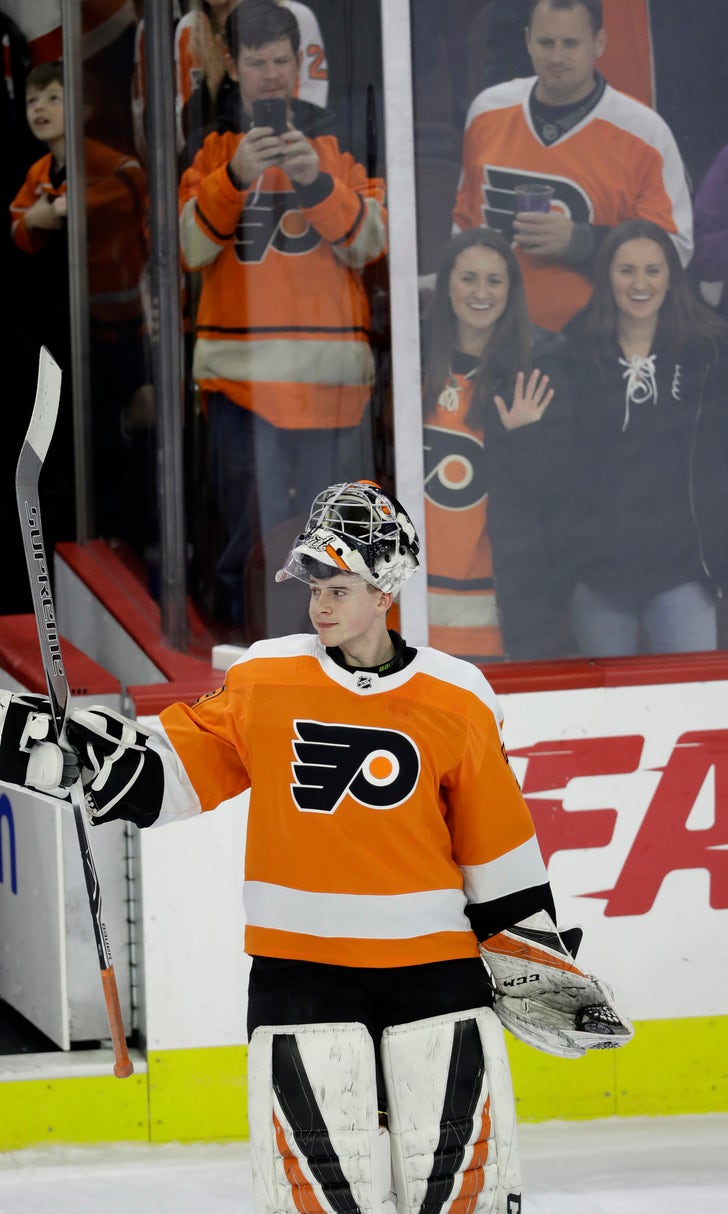 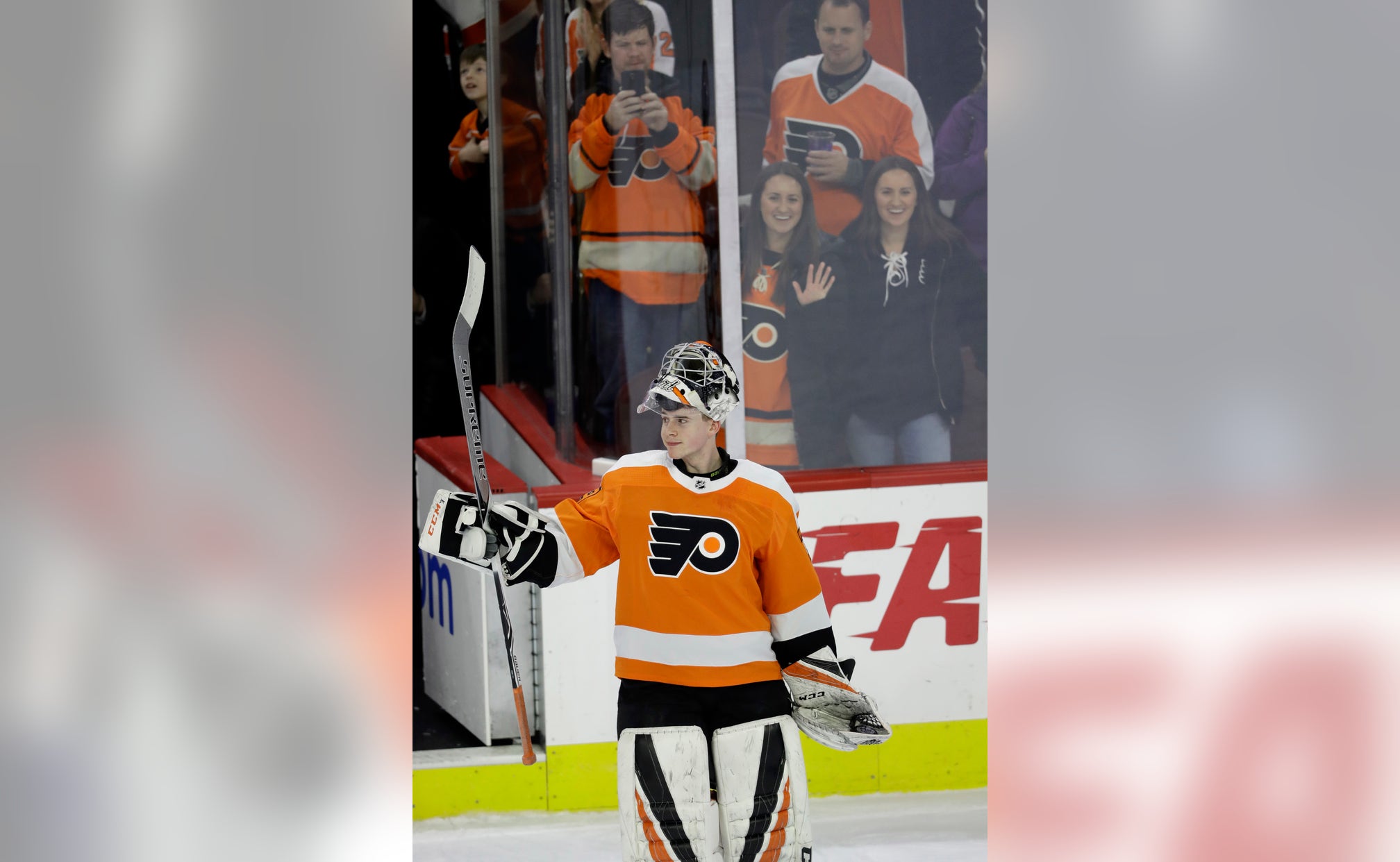 PHILADELPHIA (AP) — Carter Hart made 22 saves in his NHL debut and Shayne Gostisbehere and James van Riemsdyk each had a goal and an assist as the Philadelphia Flyers defeated the Detroit Red Wings 3-2 on Tuesday night and made interim coach Scott Gordon a winner in his first game.

The Flyers were playing their first game since head coach Dave Hakstol was fired on Monday, a more that capped a tumultuous few weeks. General manager Ron Hextall was fired last month and new GM Chuck Fletcher ended Hakstol's four-year tenure after a 1-4 road trip was punctuated by Saturday's 5-1 loss at Vancouver. The Flyers entered the game last in the Eastern Conference with 28 points.

Dennis Cholowski and Jacob de la Rose scored for Detroit, which has lost four in a row and five of six.

Frederik Andersen made 27 saves in winning for the second time in his last five starts.

Sami Vatanen and Nico Hischier scored for the struggling Devils, who are 3-6-6 in their last 15 games. Keith Kinkaid gave up five goals on 21 shots before being lifted with New Jersey down 5-1 after 40 minutes.

Troy Brouwer, Aleksander Barkov and Frank Vatrano also scored for the Panthers, who scored three goals in a span of 2:44 in the third period. Roberto Luongo made 30 saves.

Jeff Skinner and Rasmus Ristolainen scored for Buffalo, which lost to Florida for the seventh consecutive time. Carter Hutton made 30 saves.

Vladislav Namestnikov had a goal and two assists, and Filip Chytil added an empty-netter in the Rangers' three-goal third period. Alexandar Georgiev, called up on Sunday after a stint in the minors, stopped 14 shots to help New York win for the second time in eight games (2-3-3).

Pontus Aberg scored on a deflection in the second period for the Ducks, who had won nine of their previous 10 games. Chad Johnson, claimed off waivers from St. Louis on Dec. 11, finished with 21 saves in his Anaheim debut.

ST. PAUL, Minn. (AP) — Logan Couture scored twice and Martin Jones made 26 saves for his first shutout this season and the 20th of his career in San Jose's win over Minnesota.

Joe Pavelski added his 21st goal for San Jose, which has won five straight games and seven of eight. Sharks rookie Lukas Radil had an empty-net goal and one assist.

Devan Dubnyk stopped 21 shots for Minnesota, which has lost seven of 10.

CHICAGO (AP) — Cam Ward made 30 saves in his first start since Corey Crawford was sidelined by a concussion, helping Chicago top Nashville.

Defensemen Gustav Forsling and Erik Gustafsson scored for last-place Chicago, which had dropped 10 of 11. Patrick Kane picked up an assist on Gustafsson's tiebreaking goal in the second period, giving him at least one point in seven of his last eight games.

Kevin Fiala scored for the Predators, who dropped to 0-6-2 in their last eight road games. Pekka Rinne had 34 stops.

Jamie Benn and Radek Faksa scored for the Stars.

Bishop was injured with 6:23 remaining in the second period when Garnet Hathaway skated into him behind the net. Khudobin closed out the period with three saves, and Bishop returned for the third, when he made 12 of his 21 stops. Hathaway was penalized for goaltender interference.

Dallas returned from an 0-4 trip to win their fifth straight home game. The Flames had won three straight and eight of nine.

Arizona's Mario Kempe scored in the first period, but Joshua Ho-Sang answered and Brock Nelson put New York ahead with a goal early in the second.

Beauvillier made it a two-goal lead and Ryan Pulock had two assists for the Islanders, who withstood a late power play to win their third straight.

Darcy Kuemper stopped 29 shots for the Coyotes in their sixth loss in seven games since a four-game winning streak.

EDMONTON, Alberta (AP) — Pat Maroon was credited with the tiebreaking goal following a replay review early in the third period, and St. Louis went on to beat Edmonton.

David Perron, Vladimir Tarasenko and Jaden Schwartz also scored for the Blues, who have won three of four. Brayden Schenn had three assists.

Jesse Puljujarvi scored for the Oilers, who had won six straight home games.

Maroon's goal came 2:19 into the final period. Officials declared the puck crossed the line during a goal-mouth scramble, even though initially no goal was called on the ice.

VANCOUVER, British Columbia (AP) — Nikita Kucherov had a goal and an assist to reach 50 points this season and lead Tampa Bay.

A feisty Canucks squad kept pace with Tampa Bay in a heated game marked by a flurry of fights, but couldn't overpower the top team in the NHL.

Cedric Paquette, Adam Erne, Steven Stamkos and Ondrej Palat also scored for the Lightning (26-7-2). Tampa Bay has not lost in regulation since Nov. 27.

Anders Nilsson stopped 34 of 38 shots for Vancouver, and Andrei Vasilevskiy made 36 saves for Tampa Bay.

Alex Iafallo and Nate Thompson each had a goal and Jonathan Quick made 27 saves for the Kings, who ended Winnipeg's five-game winning streak.

Mathieu Perreault scored for the fifth straight game and Connor Hellebuyck stopped 27 shots as the Jets lost for only the second time in 11 games. Winnipeg also had won five in a row on the road.