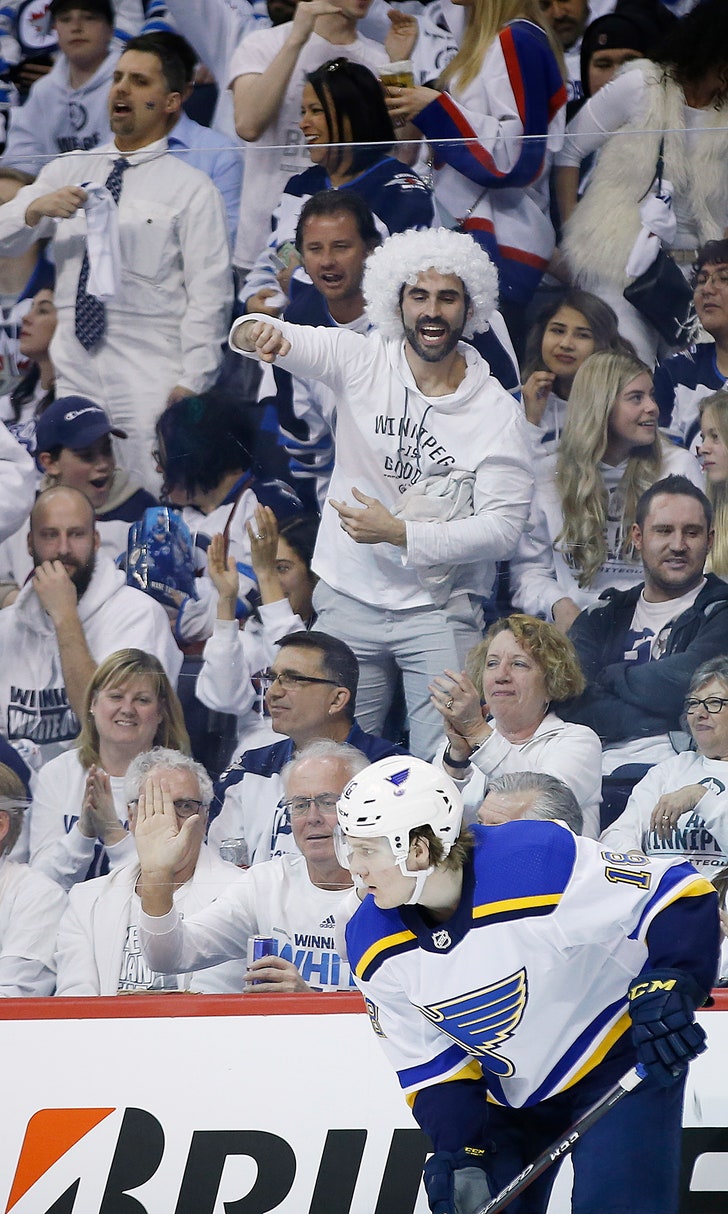 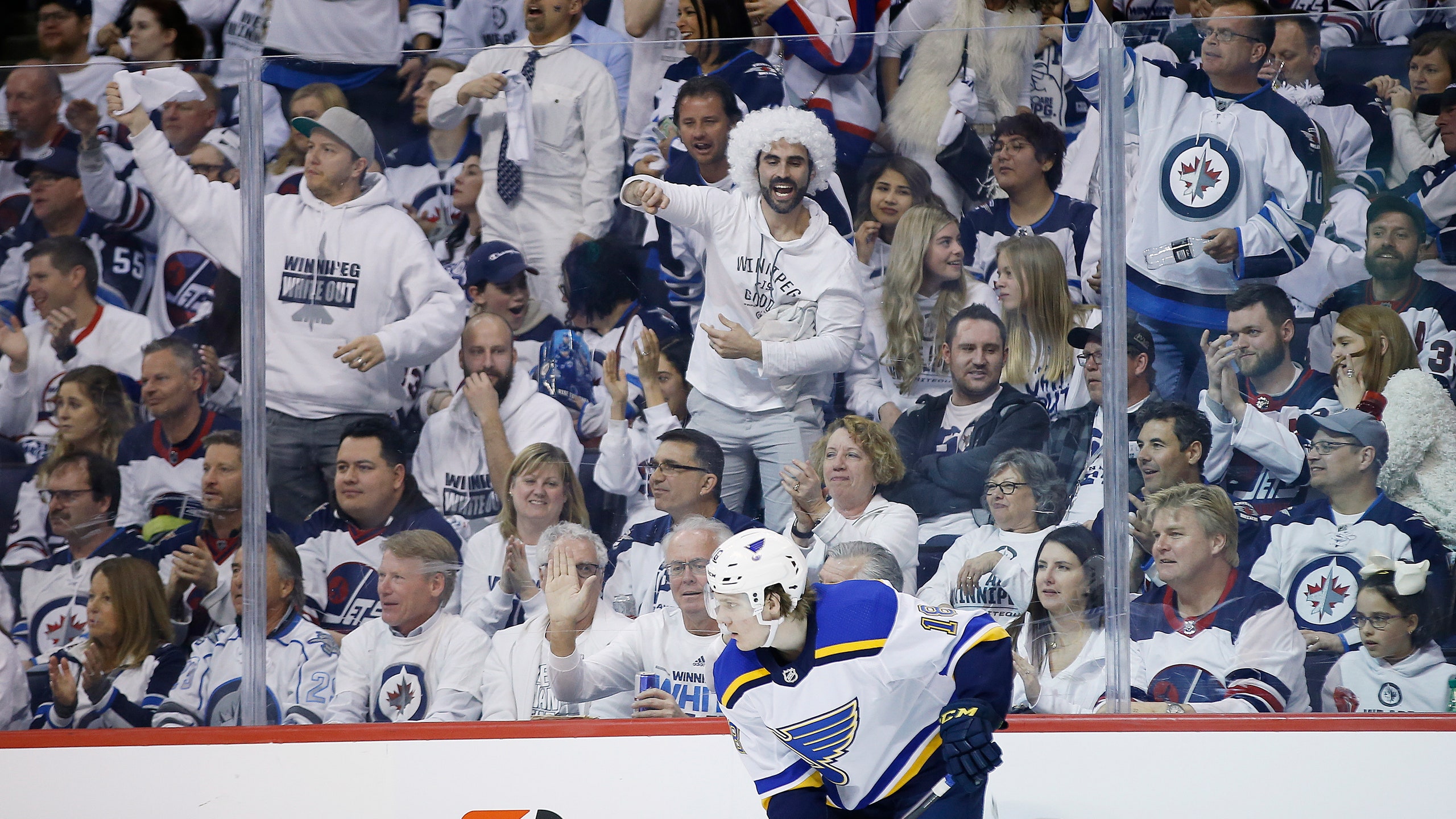 WINNIPEG, Manitoba (AP) — Pat Maroon set up the winning goal for the St. Louis Blues, and his thoughts immediately turned to his late grandfather.

Tyler Bozak scored with 2:05 left in the third period off Maroon's assist to give the Blues a 2-1 victory over the Winnipeg Jets on Wednesday night in Game 1 of their Western Conference opening-round playoff series.

"He was watching above," Maroon said of his grandfather, who died Tuesday at 95 years old. "So, obviously, that was for him."

Maroon sent a backhand pass from behind the net out to Bozak in the slot, and Bozak's quick shot went by Winnipeg's Connor Hellebuyck for the go-ahead goal.

"It's been emotional, tough days for me," said Maroon, who posted a tribute to his grandfather on Twitter. "But being with the guys and having them by my side has been really good."

David Perron also scored for St. Louis early in the third, and Jordan Binnington made 24 saves.

"I had a lot of chances tonight, so I knew the puck was kind of following me around a bit," Bozak said. "It's always fun when that happens, so after the few I missed it was definitely nice to get one in there."

Patrik Laine scored late in the first period and Hellebuyck stopped 24 shots for the Jets, who host Game 2 on Friday.

"Real tight, and that's what we expect," Jets captain Blake Wheeler said of the game. "We expect it's going to go seven, and seven real close games. It didn't go our way tonight."

The goalies played a big role in keeping the game tight, even though Binnington took an early tumble to the ice.

Winnipeg's Mark Scheifele was sent to the penalty box 34 seconds into the first period for interference. As he was skating to the back of the St. Louis net, he banged into Binnington, who was behind the net and returning to his crease. Blues forward Brayden Schenn shoved Scheifele hard in retaliation, but only drew boos from fans and not a penalty.

"It's playoff hockey," Binnington said. "I can take a hit."

Laine sent a blast from the high slot past Binnington at 13:38. The Finnish forward only had one goal in his last 19 games of the regular season.

"We've had a couple of those where they score the winning goal in the last two minutes," Laine said. "So it's always tough, but that's how it goes sometimes. We still had two minutes to tie the game, but couldn't do it. We've got to focus on the next game."

St. Louis outshot the Jets 8-7 in the opening frame, with Laine having two shots.

On the eve of the series, Laine said his confidence wasn't high and he planned to shoot every puck he could at Binnington to try to make the rookie nervous. The 20-year-old also said the Jets "have better players in this locker room than they have" and when they're on their game "we're just a better team."

Jets defenseman Dustin Byfuglien helped divert a St. Louis goal early in the second period. Vladimir Tarasenko fired a shot at Hellebuyck and the puck trickled out from under him toward the goal line, but Byfuglien swooped in and slapped it out of the crease.

Winnipeg's penalty kill worked twice more in the second period. Binnington then came up big on a backhand breakaway shot by Par Lindholm and a quick shot from Andrew Copp.

The Jets got their first power play of the game with 3:09 left in the middle frame. Byfuglien had his team's two shots with the man advantage — one was stopped and the other hit the post.

Laine rang a shot off the post just over one minute into the third, followed by Perron's point shot through traffic that went by Hellebuyck to tie it up at 4:05. The Winnipeg netminder blocked a Bozak shot late in the period and then couldn't stop the winner.

Hellebuyck was pulled right away for the extra attacker, but Binnington slid across his crease to make an impressive pad save on Scheifele's one-timer with under 12.4 seconds left.

"The mindset was just compete to the end and give the team a chance to win," Binnington said. "That buzzer couldn't have come sooner."

NOTES: Winnipeg (47-30-5) and St. Louis (45-28-9) tied for second in the Central Division with 99 points. The Jets earned home-ice advantage with three more combined regulation/overtime victories than the Blues. ... Last season, the Jets soared into the playoffs on a 9-1 run and made it to the Western Conference final, losing to Vegas in five games. The Blues missed the playoffs.

Game 2 of the series is Friday night in Winnipeg.