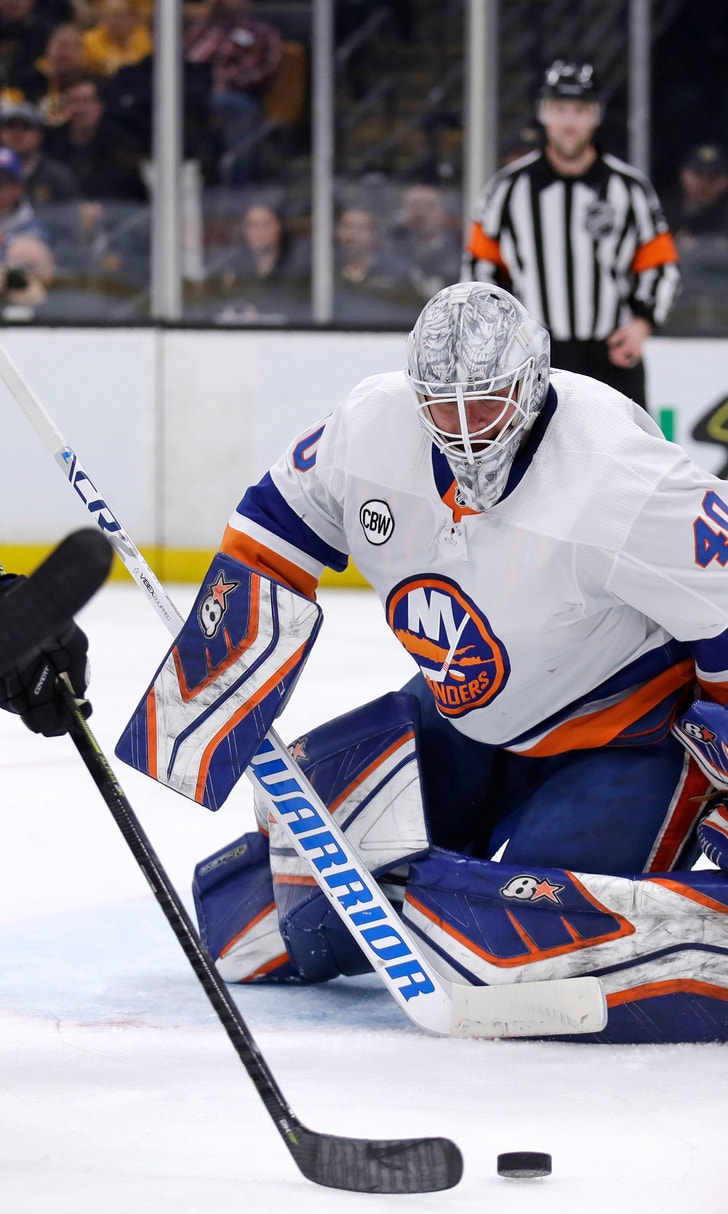 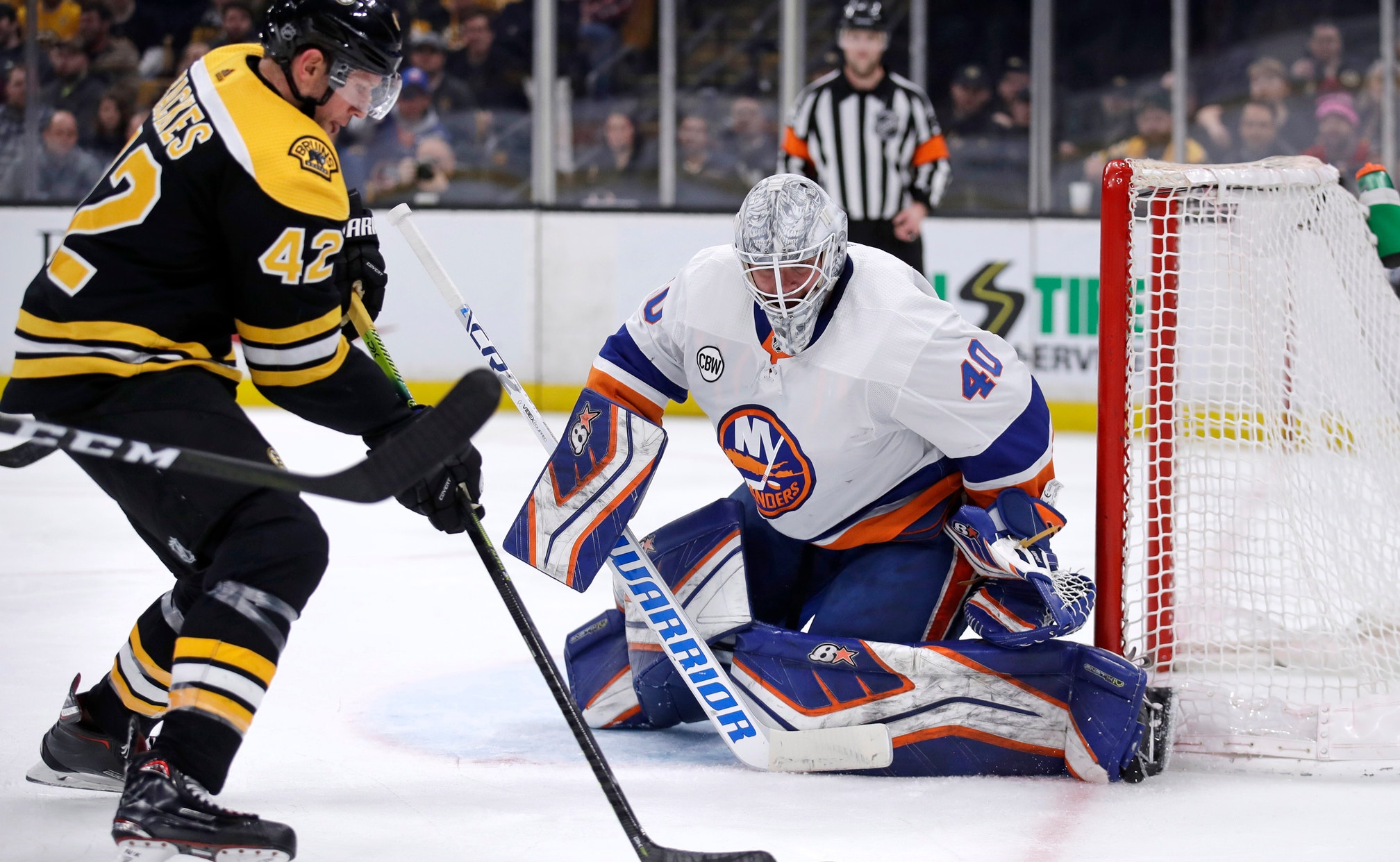 BOSTON (AP) — Patrice Bergeron celebrated his 1,000th career game with a pair of goals as the Boston Bruins beat the New York Islanders 3-1 on Tuesday night.

Bergeron, just the fifth player in Bruins' history to play 1,000 games with the club, scored early in the second period and added an empty-netter in the final minute.

Brad Marchand and David Pastrnak assisted on both of Bergeron's goals.

Jordan Eberle scored for the Islanders and Robin Lehner finished with 24 saves.

WASHINGTON (AP) — T.J. Oshie scored as part of a dominant performance, Braden Holtby made 30 saves and stopped a penalty shot, and Washington beat Vancouver in Jay Beagle's return to his old home arena.

Alex Ovechkin assisted on Oshie's 16th goal of the season to pick up his 1,180th career point and become NHL's career scoring leader among Russian players. Ovechkin went into the game tied atop that list with former teammate Sergei Fedorov.

Holtby made 13 saves and denied Bo Horvat on a penalty shot in a busy second period to help the struggling Capitals pick up two important points. Holtby was run over by Horvat prior to Elias Pettersson's goal with 7.6 seconds remaining and was attended to by a team athletic trainer before finishing the game.

Brett Connolly and Jakub Vrana scored third-period goals for the defending Stanley Cup champions, who had lost eight of their previous nine games.

Pavelski's 29th goal of the season came on a 2-on-1 with Brent Burns after a Winnipeg turnover, giving the Sharks a three-game winning streak to start off a four-game trip.

Blake Wheeler and Mathieu Perreault scored for the Jets, who had their three-game winning streak snapped and their run of seven consecutive victories at home ended. Connor Hellebuyck made 35 saves.

PITTSBURGH (AP) — Curtis McElhinney stopped 23 shots, Brett Pesce and Jordan Martinook scored from way out, and Michael Ferland and Andrei Svechnikov poured it on late as Carolina began a pivotal five-game trip with a victory over Pittsburgh.

McElhinney collected his first shutout of the season and ninth of his 11-year career by stuffing Jared McCann and Jake Guentzel with sprawling saves in the first period and never letting up as the Hurricanes picked up two big points as they try to stay in the mix for their first playoff berth in nearly a decade.

Matt Murray made 28 saves for the Penguins but lost for the third time in four starts since the All-Star break. Pittsburgh struggled to generate any consistent offensive pressure against McElhinney while playing without injured star Evgeni Malkin, who missed his third consecutive game with an upper-body injury.

TAMPA, Fla. (AP) — Alex Tuch scored the only goal in a shootout and Vegas halted a four-game losing streak with a victory over Tampa Bay.

Brayden Point and Mathieu Joseph scored for the NHL-leading Lightning, and Andrei Vasilevskiy made 35 saves. Steven Stamkos had two assists to give him 14 points over his last 10 games.

Toffoli, who had the overtime winner Monday against the Rangers, helped send the Kings to their third win in four games. Adrian Kempe, Dion Phaneuf and Ilya Kovalchuk also scored for Los Angeles. Jack Campbell made 29 saves and Anze Kopitar had three assists.

Jesperi Kotkaniemi and Phillip Danault also scored for the Canadiens, who improved to 7-1-1 in their last nine games. Jonathan Drouin had three assists. Carey Price made 24 saves for his sixth straight victory — his longest winning streak since the 2016-17 season.

Captain Ryan Getzlaf scored for the Ducks, who have lost five in a row. Chad Johnson stopped 28 shots.

Pekka Rinne made 24 saves as Nashville avoided being swept by Arizona this season, though the Coyotes did take the series 2-1.

Roman Josi scored an empty-net goal with 2:50 left and had two assists, Calle Jarnkrok had a goal, and Ellis also had an assist.

Reinhart also had a goal and an assist in regulation for the Sabres, who led by two in the second period before giving up Zach Parise's tying goal with 1:37 left in the third. Linus Ullmark stopped 41 shots through overtime in a game Buffalo never trailed.

EDMONTON, Alberta (AP) — Patrick Kane had a goal and an assist, and Chicago scored four goals in less than a three-minute span of the third period.

Leon Draisaitl scored both goals for Edmonton, which matched a season-high with its sixth-straight loss. Cam Talbot turned aside 23 of 27 shots before giving way to Mikko Koskinen, who made six saves.

Nikita Zadorov, Samuel Girard and defensemen Erik Johnson scored for Colorado, which dropped its fourth straight and fell to 3-12-2 since Dec. 21.

SUNRISE, Fla. (AP) — Vince Dunn scored with 3:53 left to cap a third-period rally from a two-goal deficit and lift St. Louis over Florida.