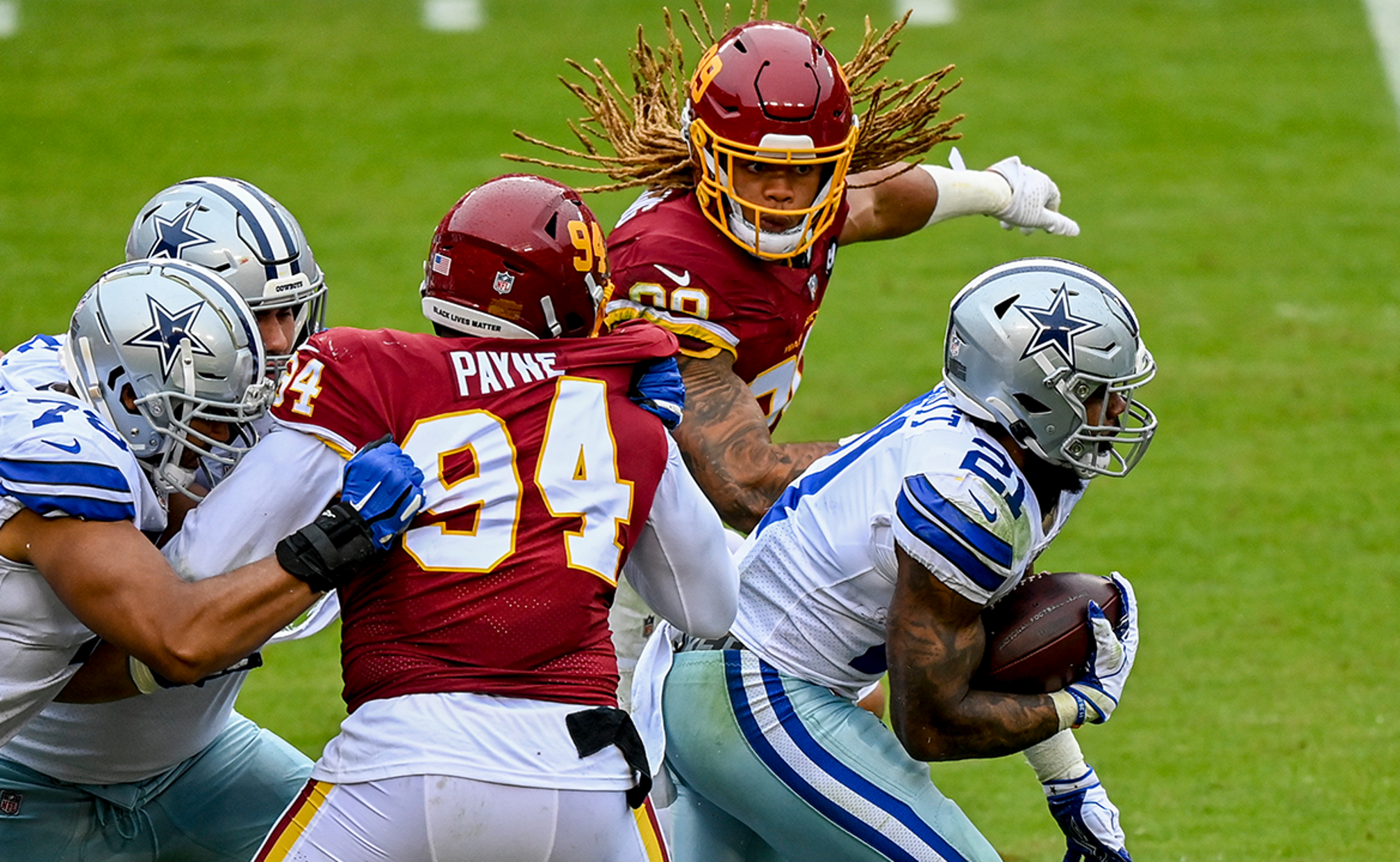 There’s a three-way tie for second place in the NFC East, and two of those teams – the Washington Football Team and Dallas Cowboys – will duel on Thanksgiving Thursday for sole possession of the lead.

You can add to the intrigue by entering the free-to-play Super 6 contest, answering the six questions below for the chance to win $50,000. Just click here to download the FOX Super 6 app!

1. What will the last scoring play of the first half be?

The options: Dallas TD, Dallas FG, Washington TD, Washington FG, any other score, or no score

Both teams featured drastically different offenses on Sunday, largely due to the two quarterbacks that have taken control. Alex Smith has the Washington offense back on track, while Andy Dalton’s return provided life to a Cowboys attack that had struggled since Dak Prescott went down with a season-ending injury.

2. How will the first touchdown of the third quarter be scored?

When these two met in Landover, Md. on Oct. 25, no touchdowns were scored in the second half. Washington dominated before the break and added on a field goal late en route to a 25-3 victory – that may have been the lowest point for the Cowboys this season.

But remember, these offenses looked vastly different. Another fact to keep in mind: Dallas’ defense has been much improved in recent weeks, especially against the run.

You can place a wager on the action with a bet on FOXBet.com – the best place to find the latest odds, prop bets and bet boosts. Check it out now for special promotions when you open an account. FOX Bet is available in Pennsylvania, New Jersey and Colorado through the FOX Bet app and online at FOXBet.com.

3. How many players will score a touchdown in the game?

Both teams are loaded with offensive weapons, especially Dallas who can run Ezekiel Elliott and Tony Pollard, or toss to Amari Cooper and CeeDee Lamb. So the number might be higher than you think with Andy Dalton effectively slinging the pigskin.

4. How many total points will be scored in the game?

Washington holds the defensive advantage with a strong defensive front lead by Ryan Kerrigan and Chase Young, which has become more and more of a factor each week. And the entire organization is continuing to improve under new leadership and coach Ron Rivera.

If Washington is going to win, the number total could be in that 40 to 45 range, while Dallas needs over 50 to win. In other words, this pick probably depends on the ultimate winner.

5. Who has the most total yards, and how many will they finish with?

This is where Dallas’ offense shines. While Dalton is not Prescott, he is still an experienced, veteran quarterback who has a roster loaded with talent. The question is: can the Dallas defense hold up its end of the bargain? They did on Sunday in Minnesota. Now, they have to do it again for the top spot in the NFC East.

6. Which team wins, and by how many points?

The Cowboys have been given a second life by the mediocrity of the struggling NFC East. But the Big D need to take advantage of the opportunity. Washington’s time may be coming, but Dallas needs this game now.

Lifting Their Voices
On Martin Luther King Jr. Day, Bubba Wallace and other athletes reflected on using their platforms for social justice.
25 mins ago

Going For Glory (And The Win)
Mahomes was out. But that didn't stop Andy Reid from laying it all on the line with Chad Henne, Charlotte Wilder writes.
1 hour ago

Who's to Credit?
Do the Bucs deserve praise, or is Drew Brees to blame for Tampa Bay's victory over New Orleans? The reactions are split.
2 hours ago