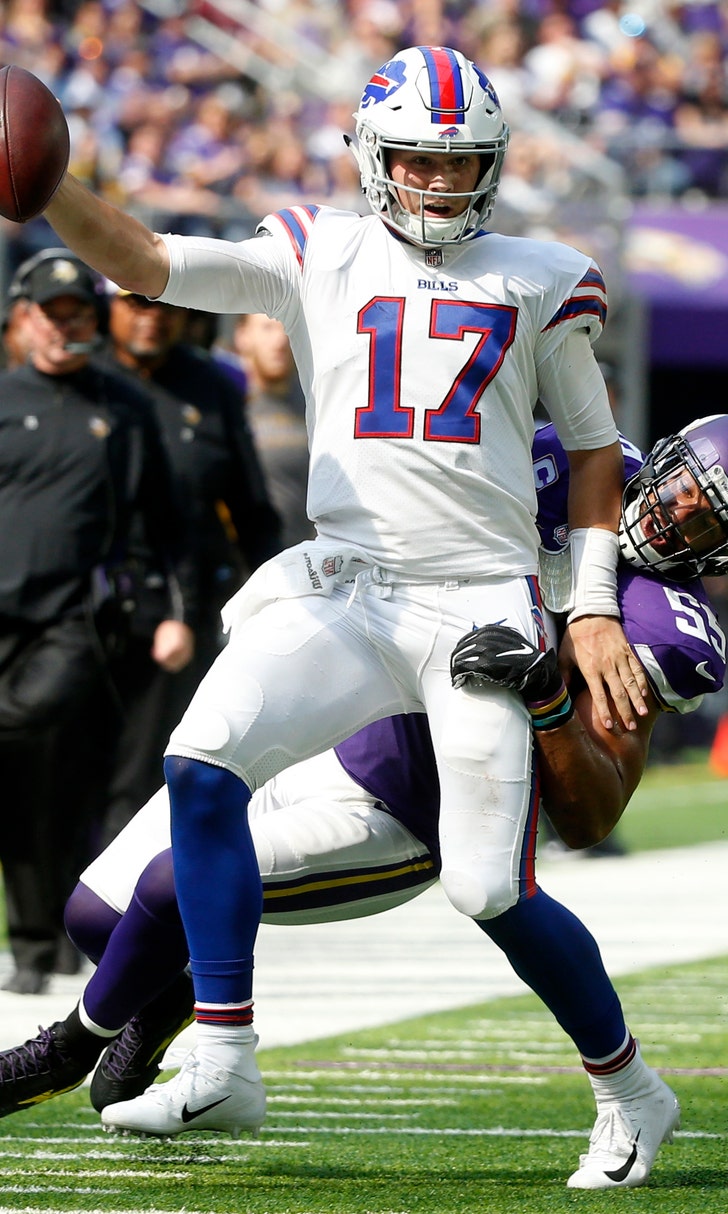 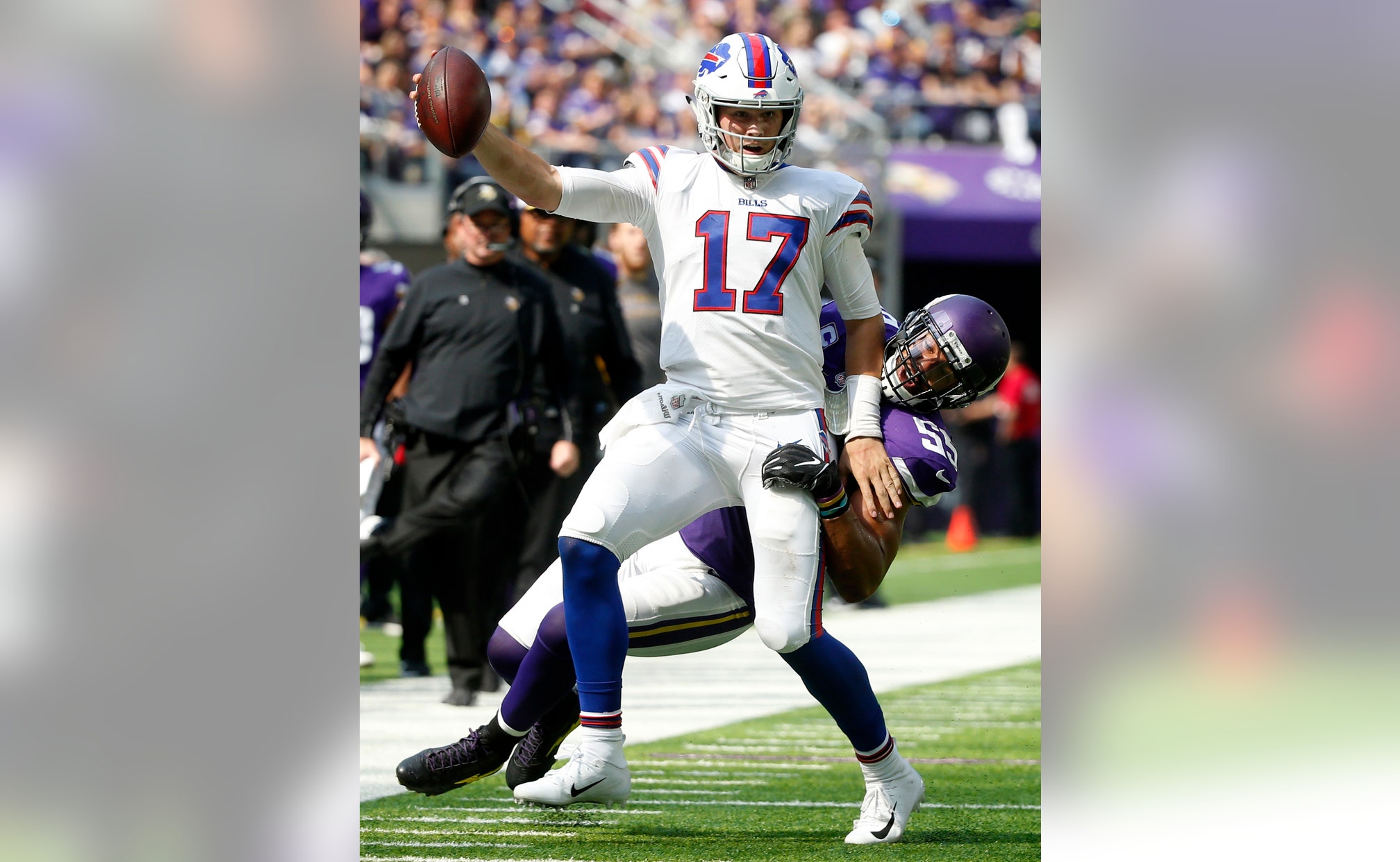 Underdog Bills unleash D on Cousins in 27-6 win vs. Vikings

MINNEAPOLIS (AP) — With Minnesota facing fourth-and-1 at the Buffalo 26, Kirk Cousins pivoted left and passed to fullback C.J. Ham in the flat near the first-down marker.

The throw early in the fourth quarter was on target as Ham began to head up the field, but safety Micah Hyde quickly closed in to take him down and knock the ball loose for an incompletion right in front of the Bills sideline.

Coaches and players jubilantly jumped to celebrate Hyde's play, as if the turnover on downs was a pivotal moment in a tight game. No, the Bills actually led 27-0 at that point. They were simply enjoying the spoils of a stunningly lopsided victory, after two rough games to start the season.

Josh Allen played with the poise of a well-seasoned quarterback by accounting for three touchdowns for the Bills in his first road start in the NFL , making Cousins look like the raw rookie in a 27-6 upset of the Vikings on Sunday afternoon.

"We've got a very talented group, a group that I trust, and I love these guys," Allen said. "I'm excited to keep moving forward with them."

Outscored 75-9 over their first six quarters while losing to Baltimore and bumbling through the first half against San Diego, the Bills have a 41-9 advantage over their last six periods. They scored on only five of 26 drives over their first two games. Against the Vikings (1-1-1), the Bills (1-2) turned each of their first five possessions into points and dominated so thoroughly that they finished with six straight punts and still never had the outcome even close to being in question.

All that in a game featuring the Vikings as a 16½-point favorite. The Bills became the first underdog in a betting spread of that size or bigger to win since Washington beat Dallas in 1995.

Welcome to the NFL.

"It doesn't matter what their record was or our record," Vikings running back Latavius Murray said. "None of that matters. Every week, you're going to get a team that's doing all they can to get it right. You have to give them credit."

Here are some other key developments from the game:

BALL IS LOOSE: After Cousins threw for three touchdowns in the fourth quarter last week at Green Bay to forge a tie and finish with 425 passing yards, the Bills brought a secondary that was ripe for picking on. With the sudden retirement of Vontae Davis and a dislocated elbow for Phillip Gaines, the Bills put Ryan Lewis in the starting lineup at cornerback in his NFL debut after a practice squad promotion.

The downfield coverage held up just fine, but Cousins didn't have much time to look anyway.

Cousins had three turnovers , including a third-down sack that resulted in a fumble to end each of Minnesota's first two drives. Trent Murphy had the first one as Cousins began to escape the collapsing pocket and tuck the ball to run, and Lorenzo Alexander recovered it. Jerry Hughes used a classic speed rush around the edge for the second one to beat left tackle Riley Reiff, whose blocking was briefly impeded by Murray's attempt to pick up a rusher, and Matt Milano fell on it.

Since Cousins became a full-time starter for Washington to begin the 2015 season, he has fumbled 33 times. That's one behind Seattle's Russell Wilson for the most in the NFL over that span. Cousins has lost 13 of 33 fumbles.

"Every week we try to emphasize to stretch for the ball, and we figure out who on their team has been loose with it, and he has been one of those guys," said Alexander, who helped the Bills raise their season total to three recovered fumbles. They went without one over the final eight games last season, including the playoffs.

NOT LIKE THAT: Bills cornerback Tre'Davious White yelled "You like that?" several times as he made his way to the locker room , a playful-but-frontal taunt at Cousins and the celebratory phrase he developed during his days with Washington and eventually had trademarked .

"That's pretty much the most common thing I hear on the field and when I play in the league. I hear that in offseason meetings," said Cousins, who finished 40 for 55 for 296 yards, an interception and a late touchdown to Kyle Rudolph .

ALLEN AIRBORNE: Allen joined Trent Edwards (Nov. 23, 2008 against Kansas City) as the only Bills quarterbacks to rush for two touchdowns in one game since the 1970 merger. He dived to finish a 10-yard run by beating Anthony Barr to the pylon for a touchdown at the end of their first possession. In the second quarter, Allen leaped over the goal line on fourth down for a 1-yard score. That drive was extended by his third-and-9 hurdle over Barr to land past the first-down marker.

GAME BALL: Bills head coach Sean McDermott gave the game ball to defensive coordinator Leslie Frazier , for his effort in the preparation and strategy after taking over play-calling duty at halftime last week with the Bills trailing 28-6. Frazier resumed the responsibility at Minnesota, though McDermott is a constant collaborator.

"Kudos to our team for not falling apart with everything that happened last week," Frazier said.

The only time the Vikings have beaten the Bills in five matchups since 2000 was at the Metrodome in 2010, a 38-14 victory that was Frazier's first home game as head coach after being promoted to replace the fired Brad Childress. The stadium roof caved in during a snowstorm the following weekend, when Brett Favre's consecutive games started streak also ended at 297 when the Vikings had to play their next home game in Detroit.

What You Need To Know To Win $100,000
NFL fans have a chance to win big absolutely for free this week. Jason McIntyre navigates a landscape full of backup QBs.
18 hours ago