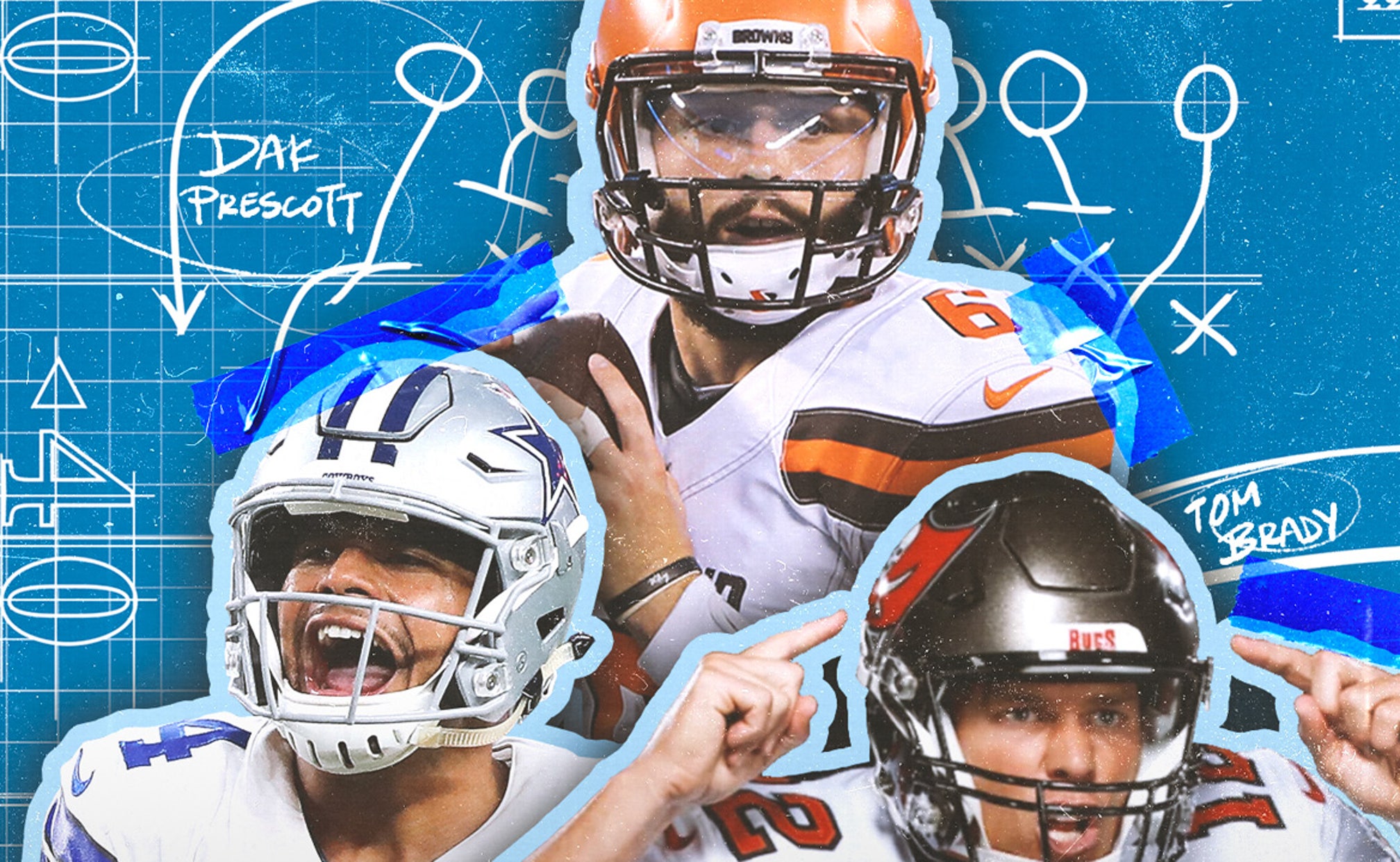 So, how did your Thursday night action go?

Hopefully, you took Patrick Mahomes and the Kansas City Chiefs as double-digit favorites in the opening game of an NFL season unlike any other, as the defending champs looked like they hadn't missed a beat against the Houston Texans.

But of course, that was just the start. This should be the greatest Fall in sports gambling history — the first one with an NBA postseason, golf majors pushed from summer to September and October, the Stanley Cup playoffs, soccer across the globe — and the NFL is the centerpiece.

SAY YES TO THE BUCS … SOMETIME IN OCTOBER

Signing Tom Brady and coaxing Rob Gronkowski out of retirement will erase the stench of a franchise that hasn’t won a playoff game in over 15 years.

But the over/under of 9.5 wins gives me pause. Greatest QB in NFL history, incredible pair of WRs, future HOF tight end, and a defense that was shockingly good (3rd in efficiency last year, including No. 1 against the run), but only 9.5? Smells like a trap — and I think it's because this team is going to take some time to gel early.

Most notably, there's reason to be concerned about whether Brady's arm is the right fit for a Bruce Arians offense: 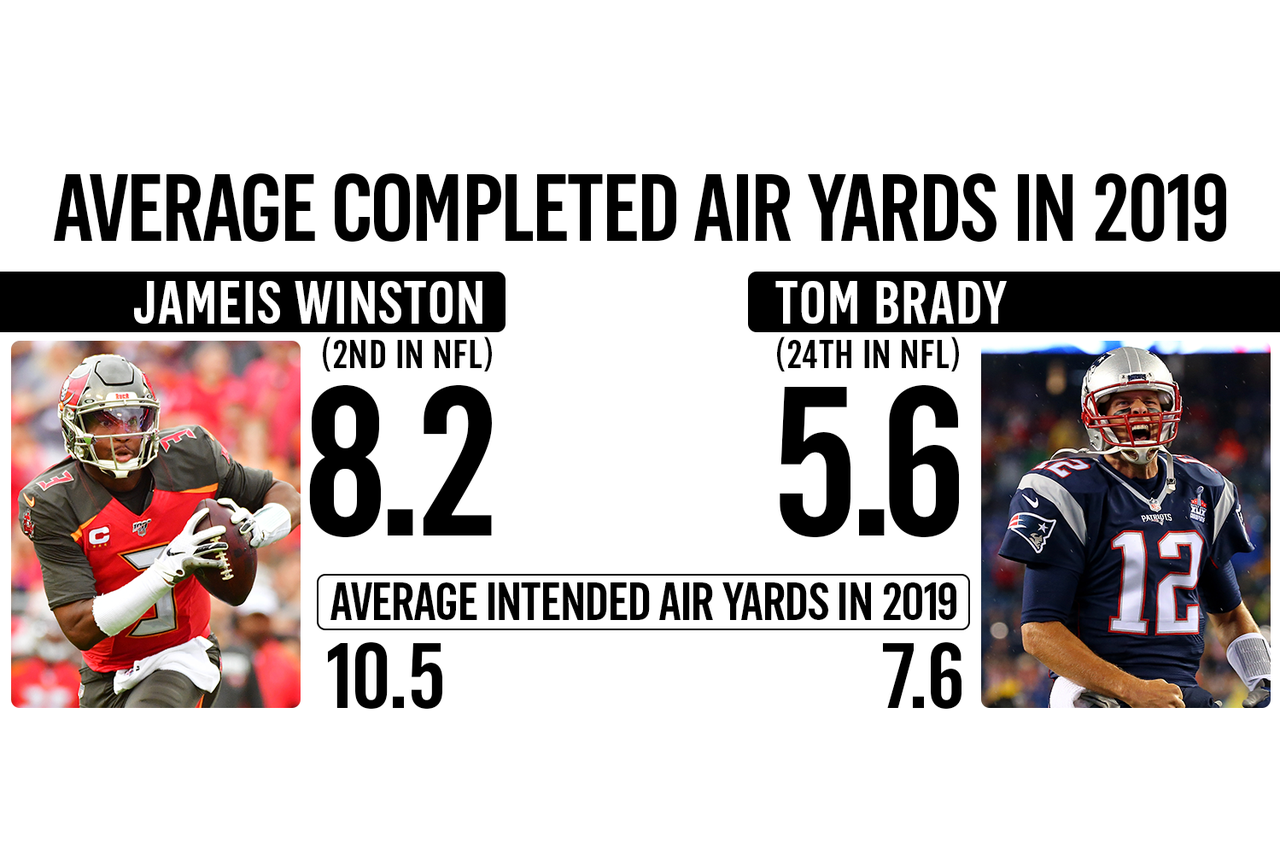 Yet the most important number for Brady this year might be six, as in no QB in the Super Bowl era has started more than six games at the age of 43 or older. Brady will likely buck that trend, but it is ominous.

Book it: A 1-2 start and an offense lacking cohesion in September, before the team starts to find its groove in month two.

Last year, the world loved the Browns. (Not I.) The bandwagon crashed in a 43-13 Week 1 loss to the Titans. Cleveland finished 5-10-1 against the spread, 3rd worst in the NFL.

Gamblers will avoid the Browns in 2020, but sign me up. New coach Kevin Stefanski is a massive upgrade over Freddie Kitchens, and the Browns' offensive pieces nicely mirror what the Vikings had in 2019. The Browns face *checks notes* zero non-conference pass defenses that ranked in the Top 15 last season.

A year after everyone loaded up on Baker and Odell futures, and tore up their tickets before Thanksgiving … this is the year you look to bet the Browns early before the market catches up.

LET’S PUMP THE BRAKES ON THE BRONCOS

From the offseason moves — CB AJ Bouye, RB Melvin Gordon and DT Jurrell Casey — to a home run draft offensively, I’m not sure if I was more pumped to see the Broncos or Christopher Nolan’s latest thriller, Tenet. (I’d watched the trailer multiple times and it still wasn't clear what is happening, which had me extremely intrigued. But I digress.)

That being said, a word of caution about Drew Lock, who has five games under his belt: His wins have come against some pretty poor competition. 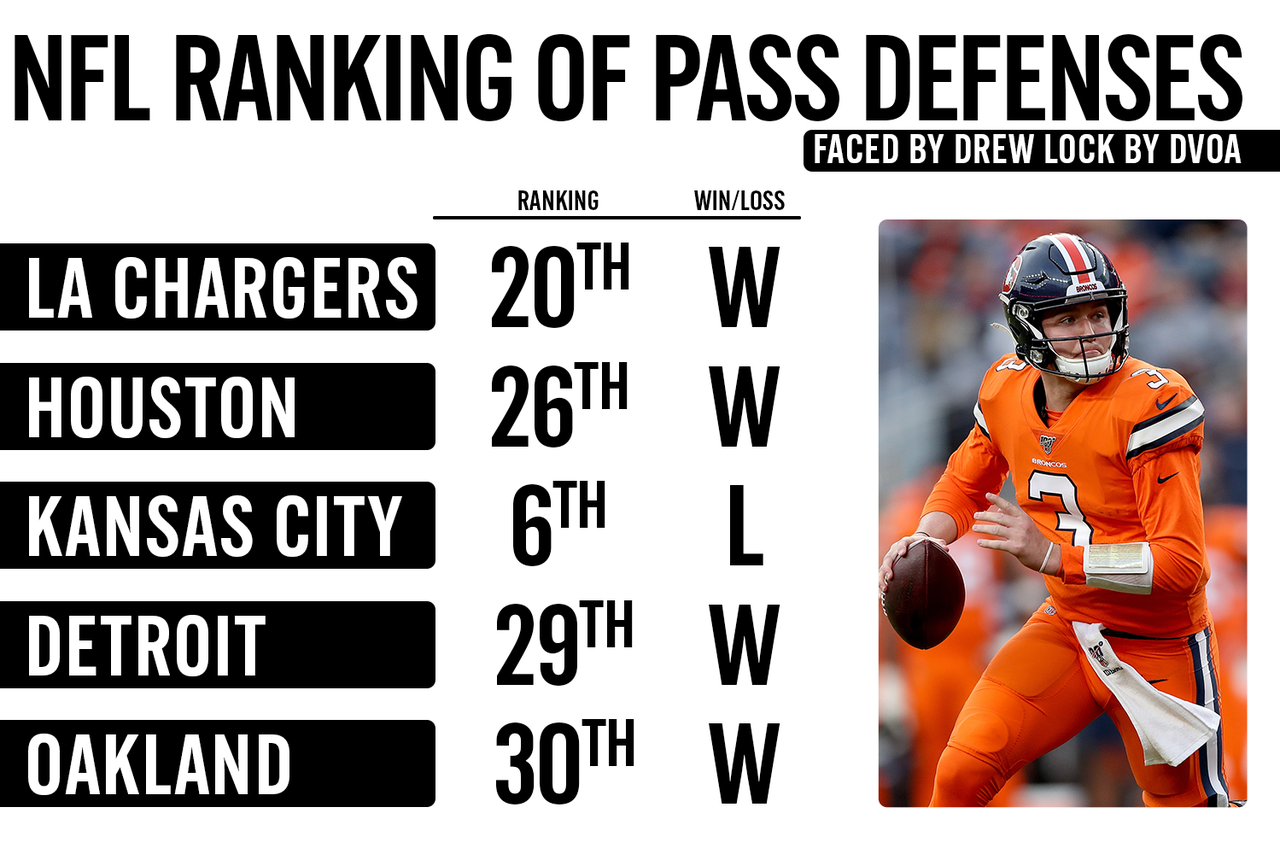 Lock is likely to exploit a bad pass defense (Titans, 21st) in the home opener on national TV, but there will be a huge opportunity to bet against them in the weeks that follow: at Steelers (3rd), vs Tampa (12th), at Jets (18th), at Patriots (1st).

And before you bet the season win total over, this November stretch is brutal:

A new play-caller, five new starters on offense, and the 5th toughest schedule in the NFL? Take the under.

NO, THIS ISN’T THE YEAR FOR THE ATLANTA FALCONS

Atlanta is another team that had a nice run late in 2019, and gamblers want to jump on board for 2020. But there’s no evidence of late season success carrying over into the next season. Not to mention: Using “opponent over/under win total,” the Falcons play the toughest schedule in the NFL.

If you make the mistake of betting the Falcons over 7.5 wins, just know that this is the gauntlet you’ll be rooting against down the stretch in December: 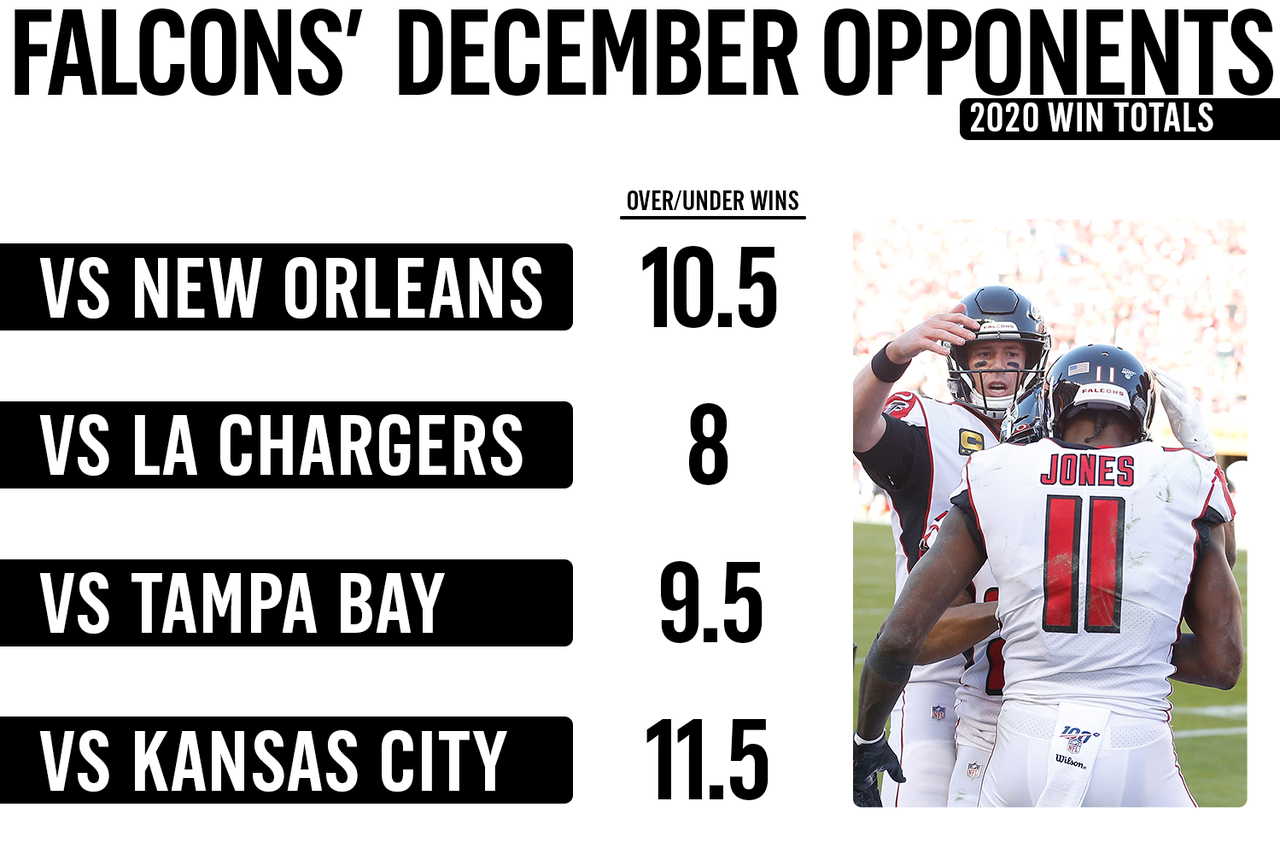 If I could ask Dan Quinn a question via Zoom: Why were the Falcons outscored by 73 points in the first half last season? That ranked 28th in the NFL. Matt Ryan had 10 TD passes in the 1st half all season; he had 11 TD passes in the 4th quarter.

Just as the public likes to lean into teams that finished the prior season strong, they love to avoid teams that limped to the finish line. What about one that added a washed-up, 38-year old QB who just threw 20 interceptions, the third highest total in the NFL?

Rivers will play behind the best offensive line in the NFL, and handing off to Marlon Mack and Jonathan Taylor is going to be a recipe for success. P.S. The Colts have the easiest schedule in the NFL.

Don’t freak out: The 49ers were 23rd in defensive efficiency in 2018. They added Nick Bosa in the draft, and Richard Sherman was healthy, and presto! The 49ers finished 2nd in defense in 2019. I don’t expect Washington to make an apples-to-apples leap, but drafting Chase Young 2nd overall to go with 3 other first-round picks on the line, plus the return of Kendall Fuller, plus a defensive-minded coach like Ron Rivera, has me giddy with optimism.

Sure, I’m nervous about a 2nd-year QB pairing with a new head coach and a new offensive coordinator coming out of a truncated offseason due to Coronavirus. And sure, the early schedule is brutal - four of their first five opponents have a season win total of eight or more.

But here I come again, Mr. Positivity! Look at how Haskins improved as the 2019 season came to a close: 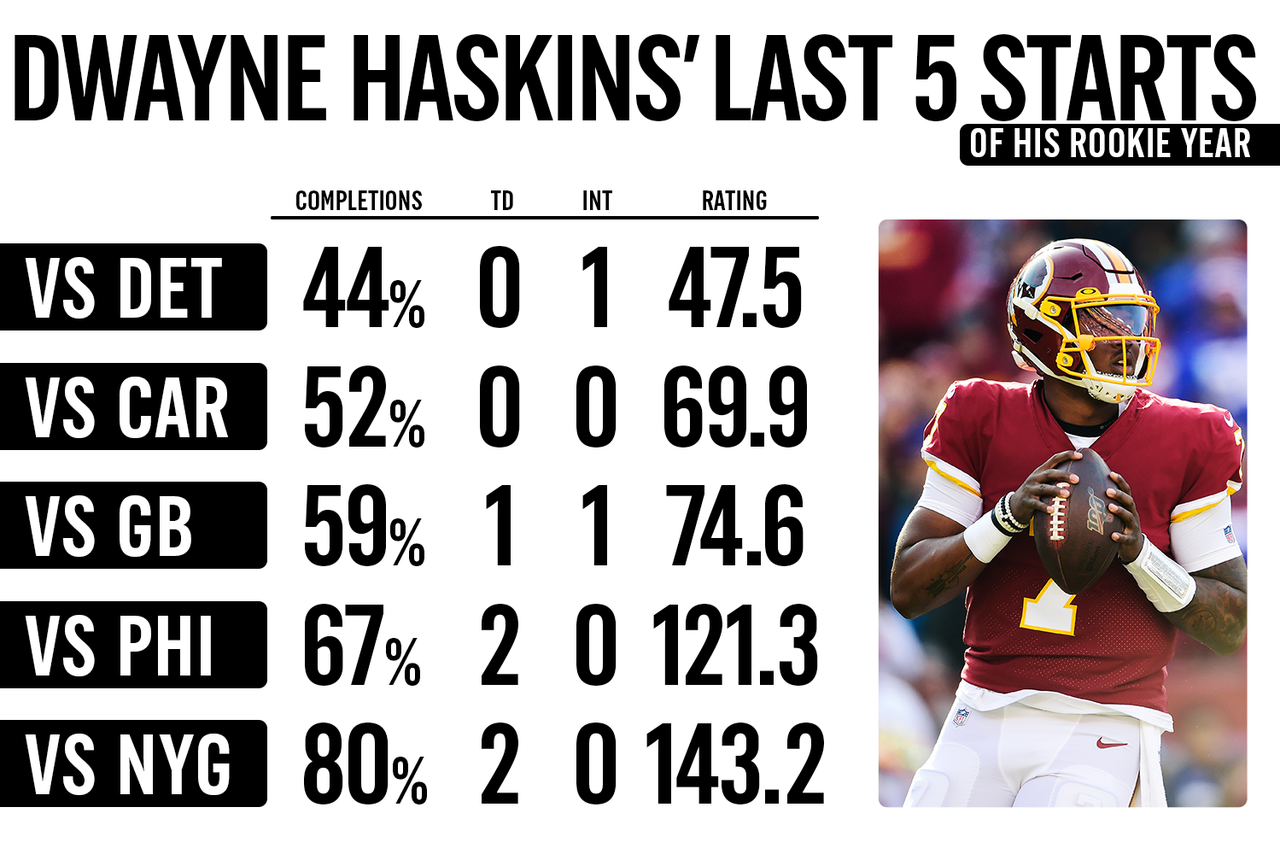 I like the over at 5.5 wins, and think there will be value betting the Redskins as dogs early.

The good: Derek Carr, thanks to some new toys, could return to 2016 form when he had 28 TDs and just six interceptions and was in the MVP discussion in December!

The bad: The offense can’t get much worse. They were last in 3rd quarter scoring in 2019 with just 27 points.

The good: The defense may have five new starters, including two expensive new linebackers and the return of 2019 1st round pick Johnathan Abram!

The bad: Last year, the defense was ghastly, giving up 30+ points five times.

After they start 1-4 and Marcus Mariota becomes the starter during the bye week, I’ll tail the Raiders as underdogs.

I’m just not ready to commit to the Cowboys, because the defense looks like an abject disaster. When you’re banking on the comebacks of Randy Gregory and Aldon Smith, you lost your best cornerback and could be starting a rookie vs. No. 1 receivers … you're in trouble.

Now, the good news — Dallas's offense should get to feast against defenses early: 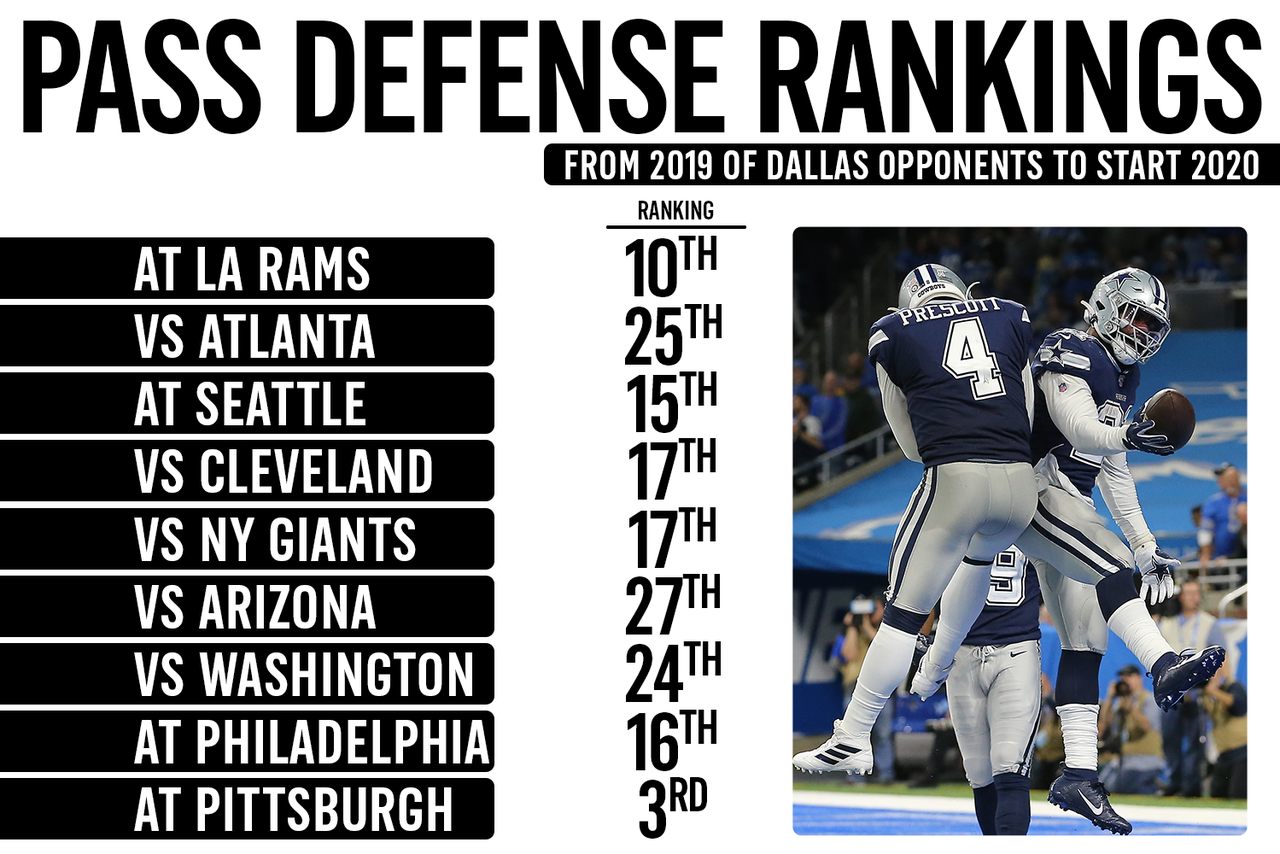 The Cowboys are too public for me, but I’ll look to back Dak Prescott against the NFC East, a division he’s dominated (17-7 ATS) — and I'll take all of your Dak futures, such as for MVP (+1400).

IF YOU’RE A SUCKER FOR STORYLINES, DREW BREES WINNING THE SUPER BOWL FEELS LIKE A LIFETIME MOVIE The Saints are +1200 to win the Super Bowl, and have a win total of 10.5. They added a very good receiver in Emmanuel Sanders and a veteran safety in Malcolm Jenkins. New Orleans was 11-5 ATS last year in the regular season (tops in the NFL), and 7-1 ATS on the road (also the best). Sean Payton has had some slow starts the last few years (0-5 ATS in last five home openers), but we’re talking about a franchise that has won 11+ games in three straight seasons.

I spent the quarantine looking, but couldn’t find one reason not to bet the Saints to win the Super Bowl.

With Tom Brady going South, the Dolphins perpetually rebuilding, and the Jets still the Jets, the Bills are going to roll in the AFC, right? Buffalo returns 10 of 11 starters on offense, added a Top 15 receiver in Stefon Diggs, and feature the 6th rated defense. Gamblers loved them, too — the Bills were 9-6-2 ATS last year, and 5-3-2 as underdogs.

So why in the name of Thurman Thomas is the Bills win total just 9? Something’s not adding up for me. Maybe it’s Josh Allen. I won’t pin blowing the entire 16-point lead in the playoff loss to Houston on Allen, but he was all sorts of awful. He was one of the worst downfield passers in the NFL, and if Diggs can’t help him, I’m not sure who can. 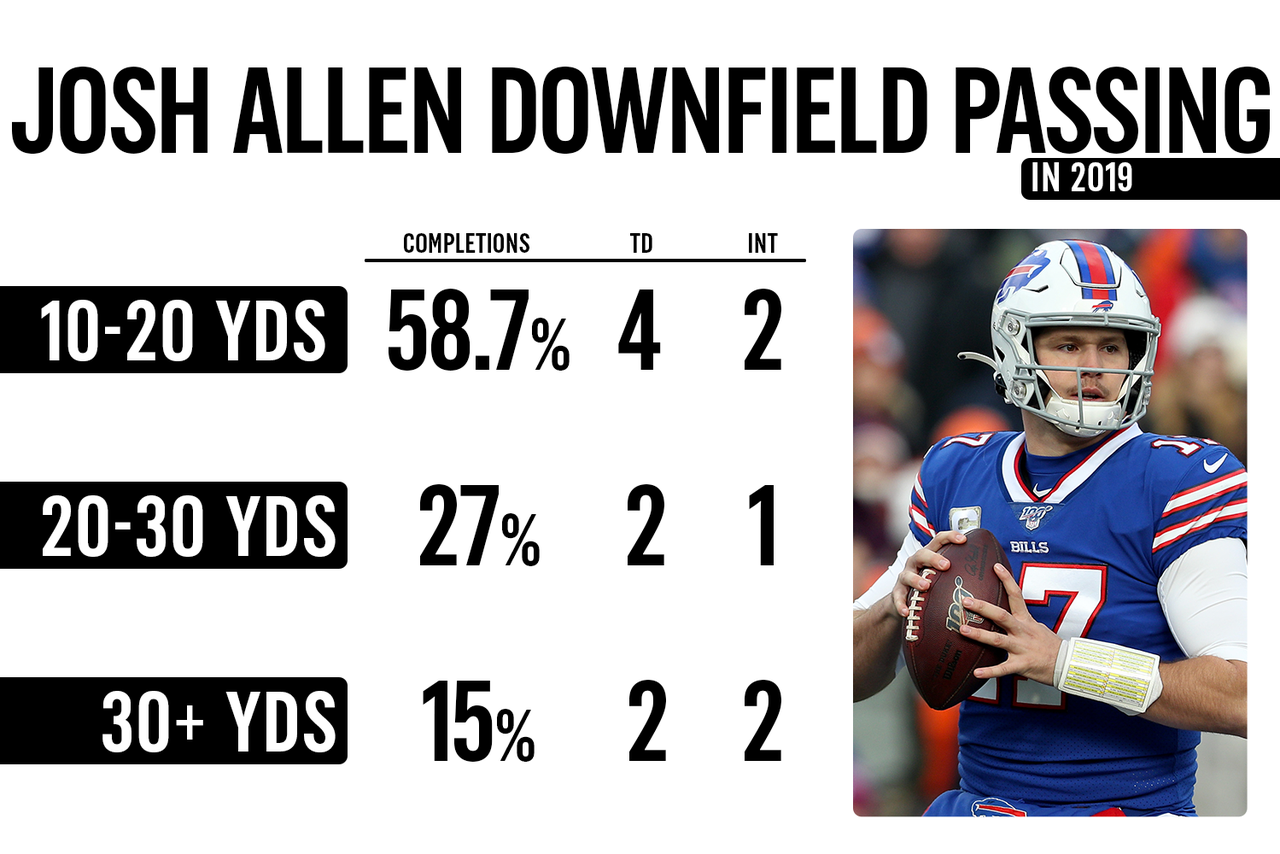 Superstar Wars
Bill Belichick has anointed a new star. And there's a chance that his powers have already surpassed those of his predecessor.
9 mins ago