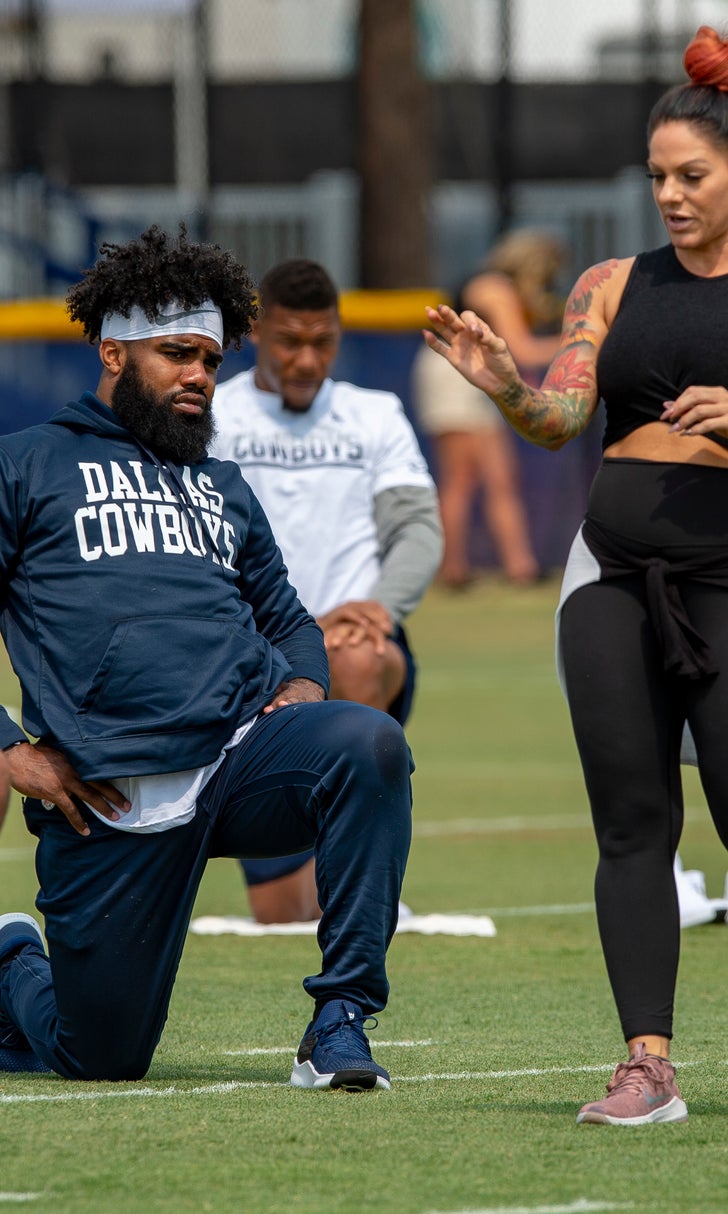 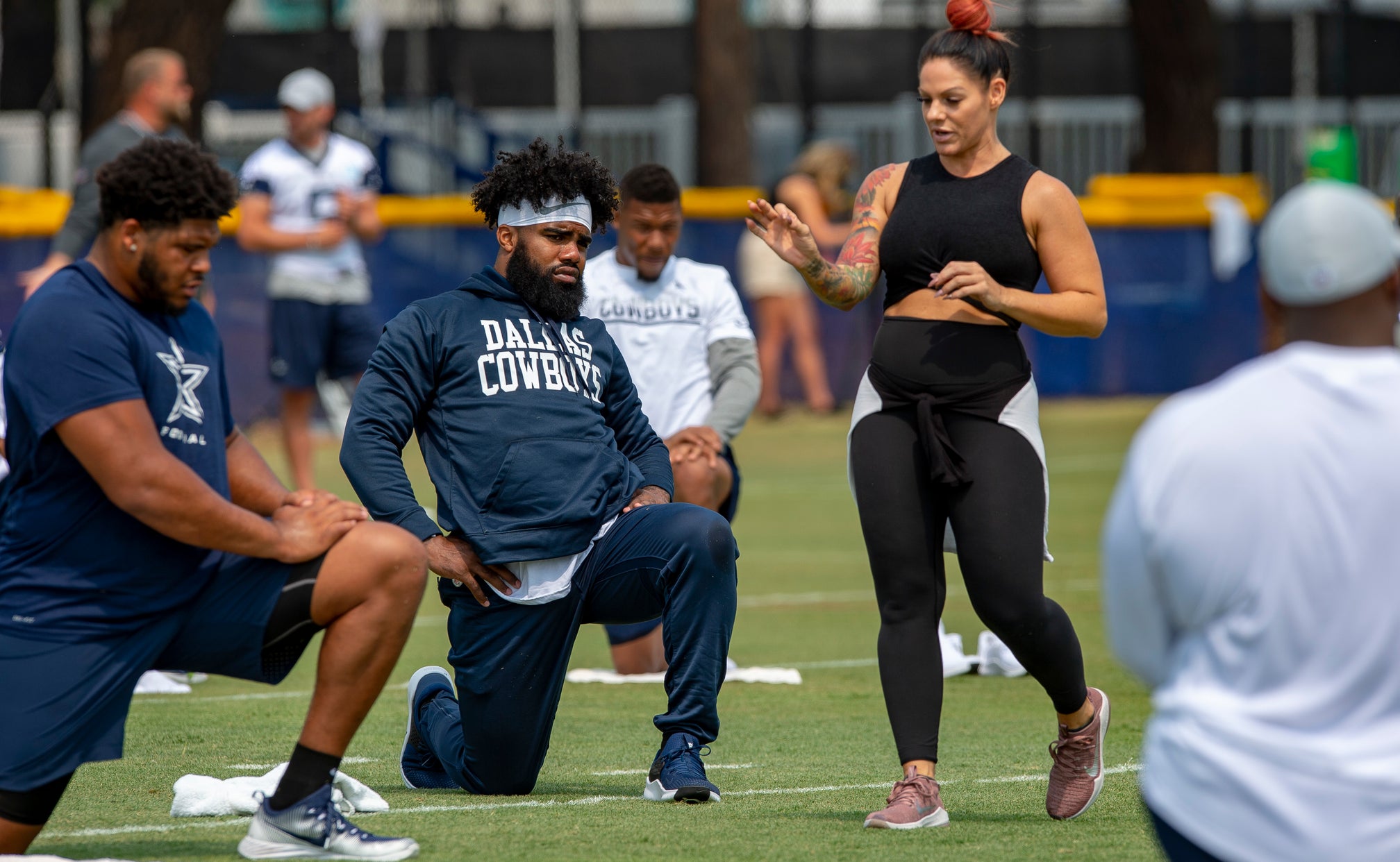 NEW YORK (AP) — Without stretching, New York Giants offensive lineman Chad Wheeler folds his 6-foot-7, 317-pound frame over far enough to place his palms flat on the ground. His knees are straight but not fully locked, because that's poor form, and he can comfortably hold himself there — he's that flexible.

That's nothing for Wheeler. Like many NFL players, he does yoga.

"It's funny doing it as a team because a lot of guys haven't done it," Wheeler said. "It makes me feel proud in a way. Like guys that are way more athletic than me, I can bend better than them in certain positions."

Football players don't fit the mold of a yogi , someone who regularly practices yoga. They're large athletes with sculpted muscles from countless hours of lifting and conditioning. Most do not look capable of the contortions required of the ancient discipline, such as standing on one foot with the other propped up on their knee in a tree pose for an extended period without falling over.

Yet in recent years, the presence of yoga has grown in the NFL. The fast-paced, hard-hitting sport has accepted the more calming practice that emphasizes conscious breathing and body flow. Much like yin and yang, the two complement each other both mentally and physically.

"Obviously (yoga) helps with flexibility, what we call join integrity, discipline, focus and balance," said Los Angeles Chargers Director of Football/Medical Services James Collins, an NFL athletic trainer for 31 years. "It has a lot of different entities to it. And one thing about professional football players is that if you explain something to them and give them the science and reasoning behind it, you can get them to buy into it."

The Giants, Jacksonville Jaguars, New Orleans Saints and Chicago Bears offer it to their players on recovery days. Others make it a team activity: the Chargers, Cleveland Browns and Dallas Cowboys.

"I was going into it expecting to tell them all the reasons why they should be practicing yoga and why it's so beneficial," said Kaleen Lugo, the Chargers' yoga instructor. "They're just like, 'You're preaching to the choir, girl. We know.'"

Getting ready in his pass-rush stance, New York Jets defensive lineman Leonard Williams has his legs spread, knees bent and feet staggered. He leans forward with a hand on the ground.

That's how he stays until the ball is snapped, holding his 6-5, 302-pound body in the three-point stance.

"For my position, you can get knocked off," Williams said. "When we're playing double teams, we got to stunt and do stuff, so it's like sometimes we have to be on one foot, plant and go somewhere. I feel like yoga helps with that, when we're doing one-legged poses and stuff like that. It helps with my balance ."

Yoga helps with so much more than balance, and flexibility.

Collins, who's also the Professional Football Athletic Trainers' Society president, said yoga is great for multidirectional joints such as the elbows, wrists, ankles, hips and shoulders. Regular stretching is linear and doesn't help strengthen those areas .

"At minimum, doing it helps maintain what you have," Collins said. "Especially as an athlete and a football player, as he's going through a season and his bodies getting beat up, everything starts to shut down — 'Boy, I feel stiff. I'm sore. I can't do this.' But if you're doing things throughout the season, like yoga, to help maintain what you've established with your body, that helps you get through the season, helps reduce your chance of injury and things of that nature."

Each player — position, really — is different, too.

Gwen Lawrence, founder of Power Yoga for Sport, has been teaching athlete-focused yoga for 25 years and taught the Giants for more than a decade under former head coach Tom Coughlin. While she would work on arm and spine strength — spinal rotation — for a quarterback, she would focus more on the neck, hips and wrists for a lineman.

It comes down to releasing tension and building strength in overworked parts of the body.

"I didn't realize once I got the hold of it how much stronger I felt," Giants linebacker Jordan Williams said. "I wasn't doing anything but using my body weight, and I felt so much stronger."

Bending to the side, Detroit Lions running back Ameer Abdullah reaches for a block on the floor . He then lifts his other legs straight out so he is parallel to the ground and extends his free arm upward.

Each limb is stretched out straight, as he breathes through the difficulty of holding yoga's half-moon pose.

That's where the mind-over-matter mentality comes in.

"They need to be trained when they're in a tough situation, they can't just bail," Lawrence said. "A lot of times they'll be like, 'Ah, this is too hard. This hurts,' and they'll jump out of that. You can't do that in a game, and you can't do that in yoga."

Mental toughness is one of the six facets Lawrence teaches in her yoga class, along with strength, flexibility, balance, focus and breath. But she also has a six-week mindfulness course Coughlin had the medical staff and players go through. The well-being of the mind is just as important as the well-being of body.

"We spend a lot of time paying attention to the psychology of the athlete," said National Athletic Trainers' Association president Tory Lindley, who's also the Senior Associate Athletic Director for Health, Safety and Performance and Director of Athletic Training Services at Northwestern University. "That mind-body connection is critical."

On the field and off it.

In 2003, Jacksonville Jaguars linebacker Keith Mitchell sustained a career-ending injury . It came after seven years in the NFL, mostly spent with the Saints. He was lost, saying he showed signed of depression and had suicidal thoughts, until he found yoga.

Mitchell credits meditation and conscious breathing for getting him through the tough time. Now, he's a yoga instructor and hopes the practice grows in the NFL because he wishes he had done it as a player.

"The game, I always say, is 80 percent mental," Mitchell said. "So anything we can do to reboot the mind — I call it a meditation and I teach it as a mind practice — that's just going to make you even more impactful, more effective on your endeavors."

Many players do it for the mental aspect alone, saying yoga gets their mind right and prevents overthinking. It forces them to be in the moment, otherwise there's no way they'd be able to accomplish some of the poses, which make them feel better physically.

One thing leads to another, much like the flow of a good sun salutation — moving from one pose to another.

"When you feel good, you play good," Lugo said. "When you play good, it's all good. They know that comes from so much more than just keeping your body in peak shape and condition."