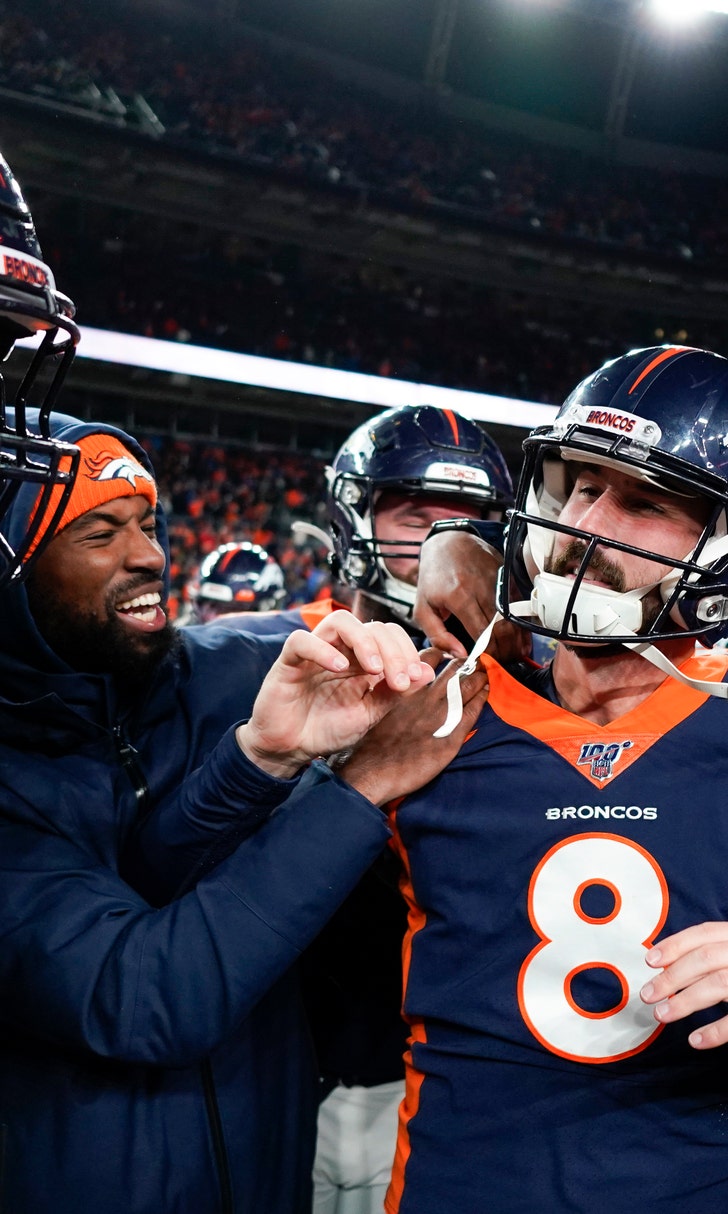 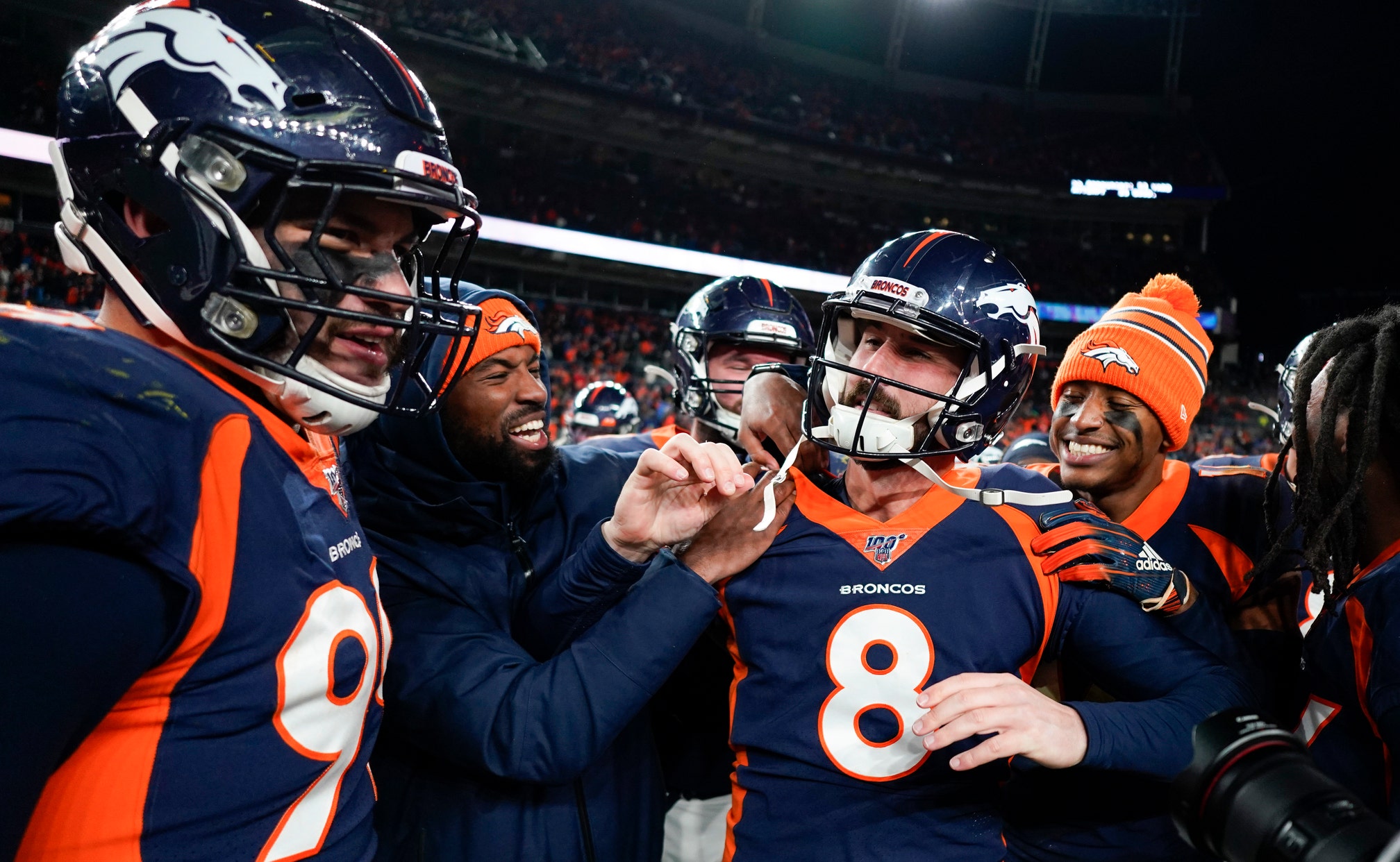 McManus furious he didn’t get shot at record field goal

DENVER (AP) — Brandon McManus looked up and saw the bright orange streamers atop the goal posts hugging the yellow uprights in the north end zone. Perfect, he thought. No wind. Thirty degrees. One second before halftime.

This was the moment he'd waited for, a shot at history.

As he mapped out his steps for the 65-yard field goal attempt and a chance to break former teammate Matt Prater's NFL record of 64 yards set six years earlier, he heard hollering from his sideline.

McManus was being summoned off the field.

Furious, McManus stormed back to the bench, ripping off his helmet as he reached the sideline and throwing it on the ground, not usually something a kicker does when his head coach makes a call he doesn't like.

The offense went back out and when Denver was whistled for a delay, backing the Broncos to their own 48, a Hail Mary by rookie quarterback Drew Lock was no longer going to happen. Instead, he threw a 33-yard pass over the middle to Courtland Sutton, who was tackled at the 20.

When McManus returned to the field just before the start of the second half, he lined up at his 45-yard line and nailed a practice 65-yarder just like he knew he would have had Fangio not folded 10 minutes earlier when Chargers return man Desmond King II lined up deep in case McManus' kick was short.

“I knew I could make it, they've seen me make it in practice and we're right at the line that I gave him," said McManus, who was good from 31, 52 and 53 yards Sunday, his last one clearing the uprights with no time left for a 23-20 Denver win.

Fangio said he decided against the 65-yard attempt because "at that point I didn't think it was desperation."

Besides, he said, "I've seen many times where guys go out there and try extra-long kicks. They alter the mechanics and it affects him the rest of the game. I'm going to say that that decision not to let him go out there for the 65-yarder led him to making the 52 and the 53-yarder."

McManus scoffed at the notion his extra oomph he would have had to use to clear the crossbar from that distance would have affected subsequent, shorter kicks.

"Does a Hail Mary change the way a quarterback throws the ball?" he asked.

Studies have shown a 65-yard field goal would require a foot speed of around 50 mph to generate enough power, plus hitting the sweet spot of the football about 2½ inches off the ground for an ideal launch angle of about 43 degrees to account for drag of a football flipping end over end.

Oh, and the margin for error from that distance is less than 6 degrees.

McManus might never find better conditions for an attempt at the record, but he'll have to have his coach willing to go through with it.

"I think we're two grown men and we understand the ebbs and flows of the game. He hasn't been here that long to see my total range in training camp over the years," McManus said of his first-year head coach.

His halftime practice kick was a message to his coach.

"Of course it is. Like I said, I know I can make the kick, and this is a storied game that I grew up watching. It was a dream of mine to play in this league and if I was able to have my name badge on the longest field goal in NFL history, I would love that," McManus said. "That's why I would have loved to kick that attempt."

McManus, however, hasn't been money like he was in the playoffs in 2015, when he set an NFL record by making all 10 of his field goal attempts on the Broncos' Super Bowl 50 championship run.

He had a streak of seven straight misses from 50-plus yards before making a 53-yarder against the Titans in Week 6, and he kicked the ground on an errant 43-yarder at Minnesota three weeks ago that played a crucial role in Denver's 27-23 loss to the Vikings.

On Sunday, he nailed his 52- and 53-yarder, the game-winner coming after he bounced a kick off the right upright and through the goal posts after Chargers coach Anthony Lynn called timeout to ice him.

"I don't think I've ever made one off the upright in my career in my six years, but any time it goes through, you're feeling confident about it," McManus said.

McManus explained that he, long-snapper Casey Kreiter and holder Colby Wadman have worked all season on going through with kicks when whistles are blown at the last split-second like Sunday so the ice-the-kicker strategy actually allows him to see what the conditions are like.

“I want a practice kick regardless of what happens because I want to see if the wind is moving it or if I miss it. I know I'm not going to miss the second one if I make it," McManus said. "I obviously feel confident about the kick."

So, are McManus and Fangio good?

"Yeah, 100 percent," McManus said. "Kicking is a completely mental game. You battle the struggles, the ebbs and flow of it, you know, head coaching, we deal with a lot of the same scrutiny. He has to make decisions and I have to make pressured kicks. At the end of the day, I'm mad because I didn't get to kick, and in his mind, he made the right decision for the team.

"I have no problem with that, but like I said, I would love to have my name in the history books." 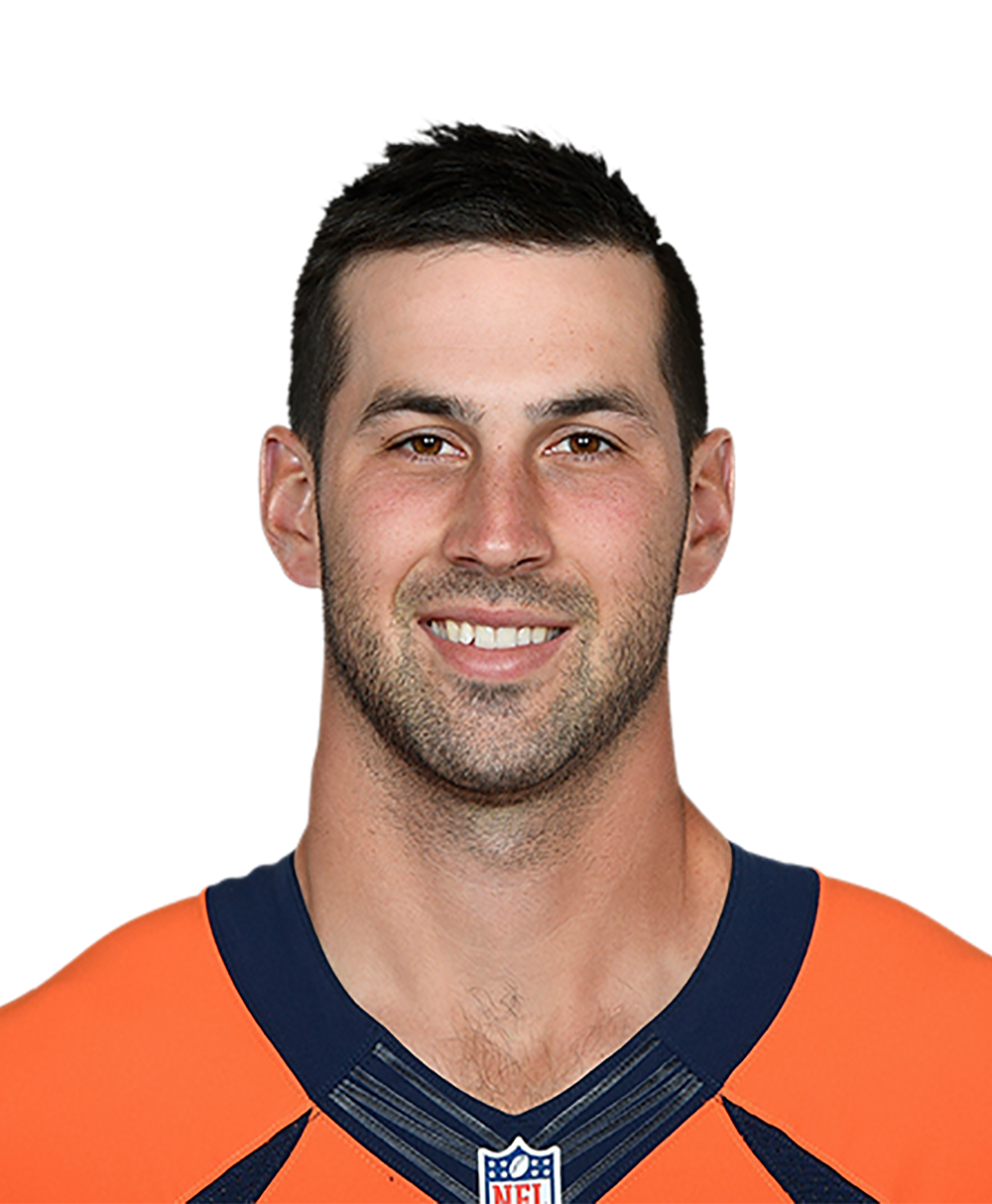