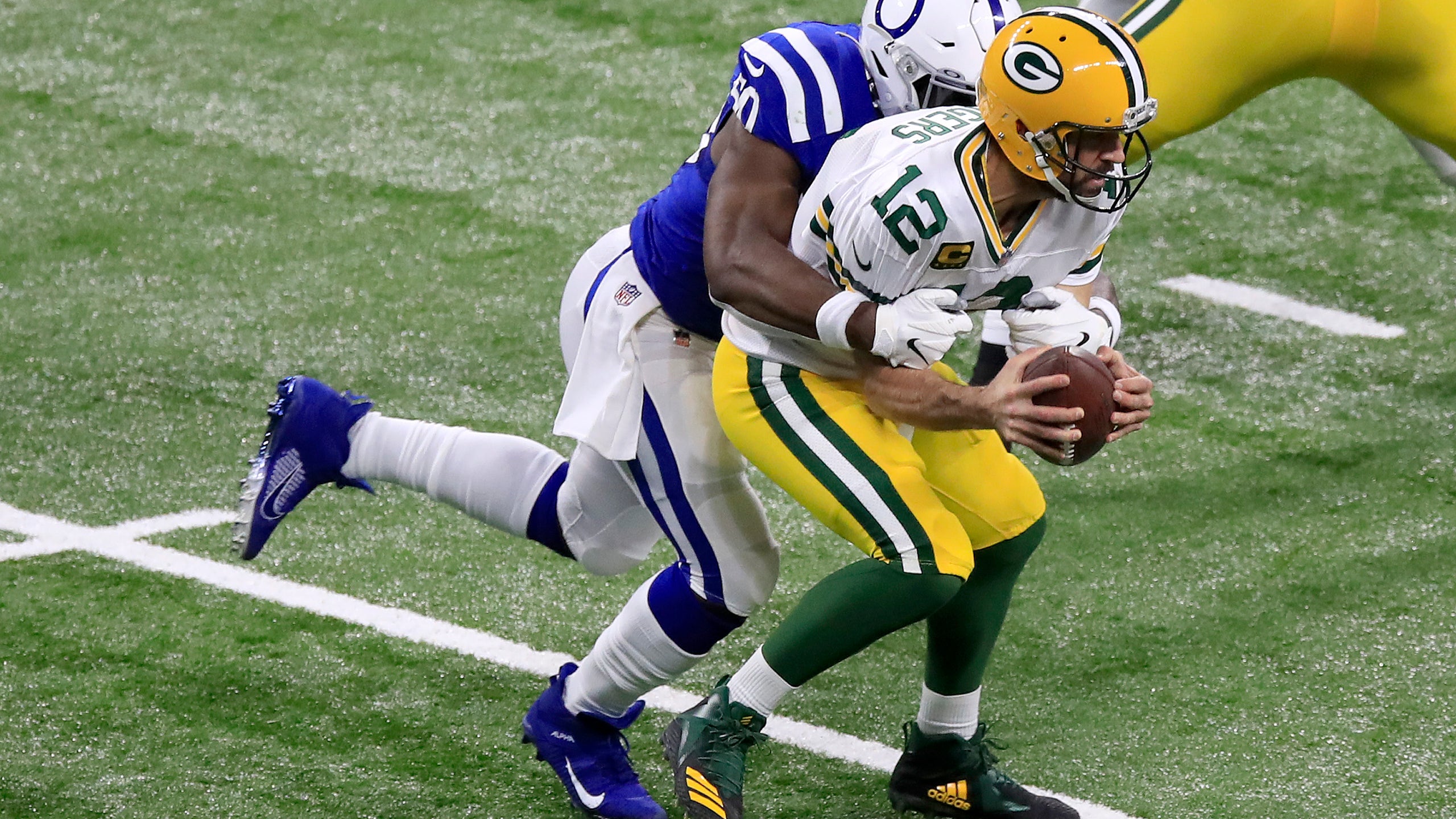 Now, fans have just been left hoping for some consistency.

Green Bay suffered its third defeat of the season on Sunday, a 34-31 overtime loss at Indianapolis in a game that the Packers led by 14 at halftime.

In fact, after scoring 28 points through the first 30 minutes, Green Bay was held to three points in the second half and overtime, while allowing 20, a disappointing outcome for a franchise with a "Super Bowl or bust" mentality.

Aaron Rodgers, like the Packers, was really, really good in the first half, throwing three touchdowns to three different receivers, including his top target Davante Adams, who finished the day with 106 receiving yards and the score.

Rodgers connected on 27 of 38 passes for 311 yards, and he only tossed a single pick alongside his three passing scores. But in the end, his counterpart, Philip Rivers, nearly matched him, going 24-for-36 for 288 yards, three touchdowns and a pick.

Despite allowing 28 points in the first half, the Colts won the game with their defense. Indianapolis forced four turnovers, including three fumbles.

The Colts also held the Packers to 66 yards rushing, while racking up 140 yards on the ground on offense.

Over the last two weeks, Indianapolis has allowed just a field goal in two consecutive second halves, after holding Tennessee scoreless in the final two quarters in Week 10.

While the Colts' defense was, and is, on fire, it can't be ignored that the Packers' offense had its way in Indianapolis in the first half before completely pulling a no-show in the second half.

And on Monday, Colin Cowherd had some strong words for Green Bay.

"Nobody looks better in better weather [than Green Bay]. They just scream country club livin'. But they've never been in a fight and won a fight in their lives ... The second half became a little bit of a fist fight, and Green Bay rolled over."

Green Bay remains atop the NFC North – holding a two-game lead over the Chicago Bears – and their 7-3 record is tied with Seattle and Tampa Bay, which plays the LA Rams on Monday night, for second best in the conference.

But when taking a deeper dive into their wins and losses, things aren't completely rosy for the Packers.

In light of a few alarming trends, Stephen A. Smith said Monday morning that Packers are struggling with a lack of weapons on the offensive side of the ball more than anything.

"I just look at Green Bay and I say to myself that yesterday was emblematic of what we're talking about. They jump out to a 28-14 lead, and between the next two quarters and overtime, you put up a grand total of three points ... I don't think that's good enough to win a Super Bowl."

Smith's co-host on First Take, Max Kellerman, was not ready to shut the door on the Packers' Super Bowl aspirations just yet, however, pointing out that the Colts enjoyed some good fortune in Sunday's overtime win.

"They've played three good teams this season, and they're 1-2. And they're a fumble away from being 2-1. The Bucs beat 'em up ... but the Packers beat the Saints early ... If not for a fumble, they beat the Colts yesterday."

Green Bay won the coin toss and received the ball first in overtime. However, their opening drive quickly came to an end after a Marquez Valdes-Scantling fumble and Indy recovery at the Green Bay 29-yard line, setting up the game-winning field goal for the Colts.

Unfortunately, Valdes-Scantling faced some harsh and dangerous criticism after the game.

Out-of-bounds fandom aside, the Packers have a favorable schedule down the homestretch, with only one matchup left against a team currently sporting a winning record, a home tilt against the Tennessee Titans in Week 16.

If the Packers can finish the season 6-0, they will match their win total from last season, and get near it even with a single loss. But regular season wins aren't what Green Bay is about, especially with its future Hall of Fame quarterback entering the twilight of his career.

Rodgers' star will have to burn brighter than ever to take the Packers to the Promised Land this season.

We'll see soon just how hot the veteran superstar can get.

Can Buffalo Shock The World?
The Bills are coming in hot, but can their defense find a way to stop Patrick Mahomes and Travis Kelce in Kansas City?
13 hours ago

The Most Significant QB Duel Of All Time?
Tom Brady & the Bucs take on Aaron Rodgers & the Packers in what could be the greatest NFL playoff QB duel we’ve ever seen.
13 hours ago

Colin's Blazin’ 5: Championship Sunday
Colin Cowherd is back with his favorite picks against the spread ahead of the NFL's championship weekend.
14 hours ago

Will The Mahomes News Move Lines?
Patrick Mahomes is set to play Sunday. Will the odds change? And how much are elite QBs worth to the spread? Sammy P explains.
18 hours ago