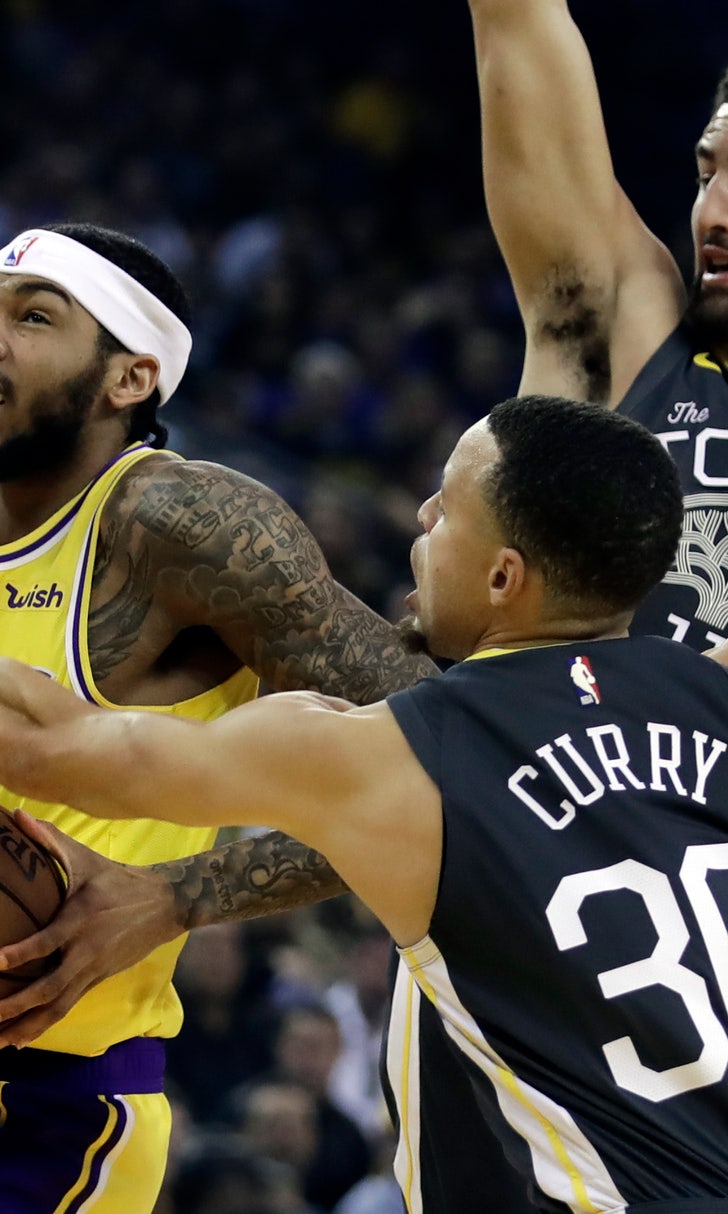 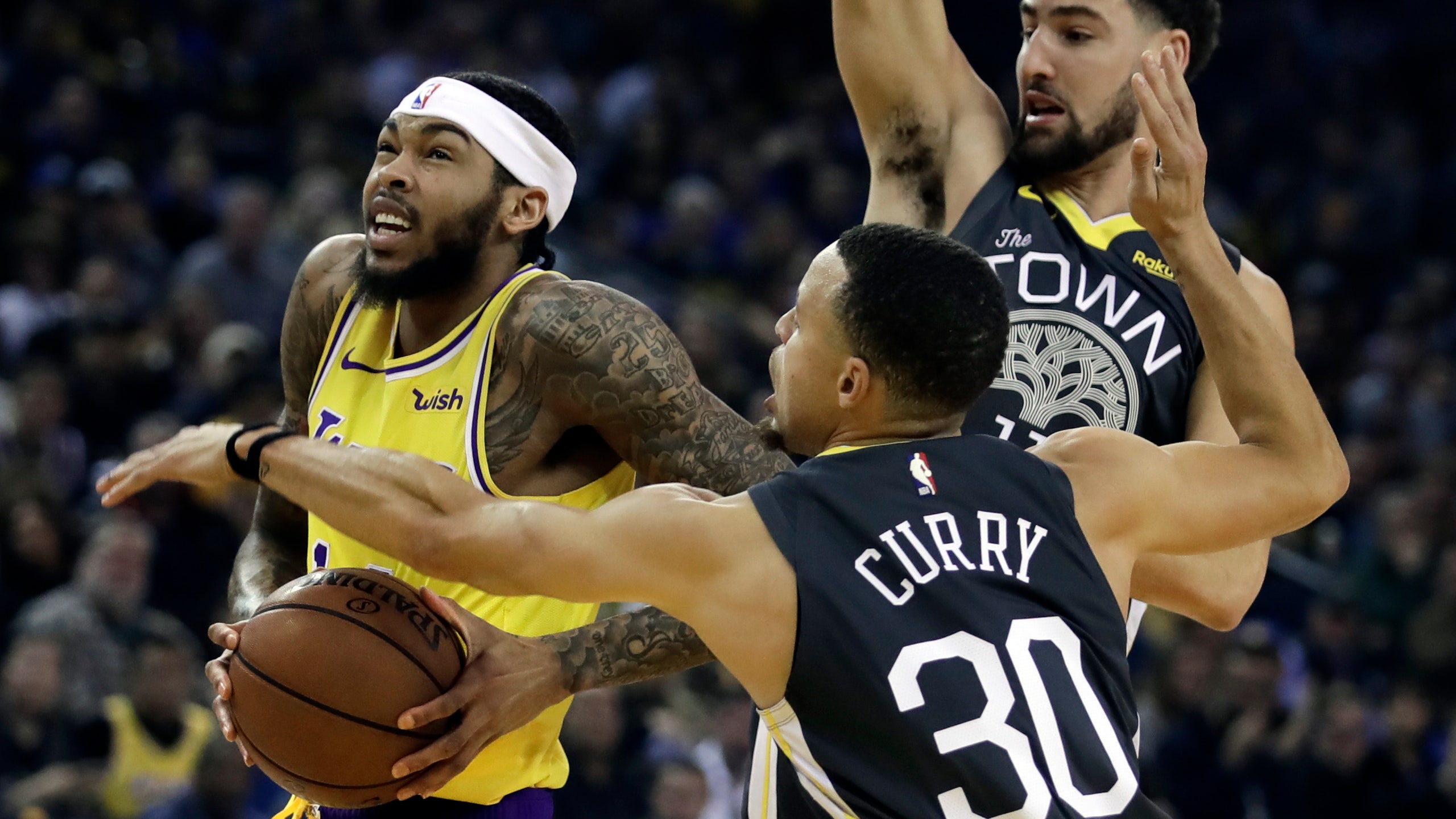 Thompson returns from illness to lead Warriors past Lakers

OAKLAND, Calif. (AP) — DeMarcus Cousins provided an emphatic dunk that might have been the timeliest play of the night and ignited the fiery big man's new home crowd. Klay Thompson's steady hand did much of the rest in a strange game when it took Stephen Curry more than 3 1/2 quarters to finally make a basket.

Thompson returned from a one-game absence with an illness to score 28 points and light up the Lakers for the second time in 13 days, leading the Golden State Warriors to a 115-101 victory Saturday over a Los Angeles team again missing LeBron James.

Curry missed his first eight shots before a layup with 6:20 remaining and still wound up with 14 points, two days after going off for 41 in a loss to the 76ers when he hit 10 3-pointers. The other Warriors picked up the slack.

Andre Iguodala hit a go-ahead 3 in the final minute of the third, two more early in the fourth as Golden State pulled away and finished with 17 points. Cousins contributed his first double-double with 18 points and 10 rebounds in his second home game and seventh in all since coming back from a nearly yearlong recovery from surgery for a ruptured left Achilles tendon.

Kevin Durant added 21 points and 11 of the Warriors' 31 assists.

The Lakers hung tough without James just as they did here in a 127-101 victory Christmas night. They lost James in the third quarter of that game to a strained left groin. He returned from a 17-game absence Thursday night against the Clippers only to sit again Saturday.

James' rest was for what coach Luke Walton called "load management." The four-time MVP had been set for his second game back but woke up Friday "very sore" after playing 40 minutes in the 123-120 overtime win against the Clippers. He finished with 24 points, 14 rebounds and nine assists.

"It took us some time to adjust to what the new game plan was," Walton said.

Cousins drove for a filthy one-handed slam against Kyle Kuzma at the 5:28 mark of the third then stared him down and trash-talked to pick up a technical.

"I thought his dunk brought the arena to life and brought the team to life," Warriors coach Steve Kerr said. "We were searching for energy and emotion up until that point. This was a typical game where you let your guard down a little because the other team's best player's not playing, so there was no life in the building and our guys weren't generating any energy. That play changed all of that."

Golden State had its 11-game winning streak, longest in the NBA this season, snapped with a 113-104 loss to the 76ers on Thursday night in Cousins' home debut. The Warriors missed Thompson in that one.

He connected on his first four shots Saturday with a 3 and finished 10 for 15.

Thompson doesn't worry a bit about Curry's shooting touch, impressed at how he keeps firing.

"The man is not immune from an off night, even though it's very, very rare," Thompson said. "Even when he's 0 for 8 he's going to have that gunner mentality, and I think he's earned that over his career."

Warriors: Durant notched his fourth points-assists double-double of the season. ... Upon learning Nuggets coach Michael Malone would coach the West All-Stars with Denver's 107-106 win at Minnesota, a beaming, laughing and fist-pumping Kerr said leaving the postgame interview room, "Take care, guys, have fun in Charlotte." ... Draymond Green had seven more assists to give him 75 in his past eight games.

Ex-Warriors center JaVale McGee received his championship ring at last. He had been sick and didn't travel with the team to the Bay Area for the Christmas game.

McGee received his ring from Iguodala, who initially presented his former teammate with an empty box as a joke. McGee then held the ring to either side of the court and waved during a rousing ovation for the big man who spent two seasons in the Bay Area.

"JaVale was a big part of the last two championships," Kerr said. "It's only right to honor him and present him his ring and give him his moment in front of our fans for them to say thank you."

Lakers fans way up in the rafters chanted "We want Thompson! We want Thompson!" — he becomes a free agent this summer — as he shot free throws in the second quarter. His father, Mychal, was a star for Los Angeles.

"They should want Klay," Kerr quipped. "If I were sitting with them I'd chant the same thing."

Lakers: At Indiana on Tuesday.

Warriors: Host the Spurs on Wednesday.