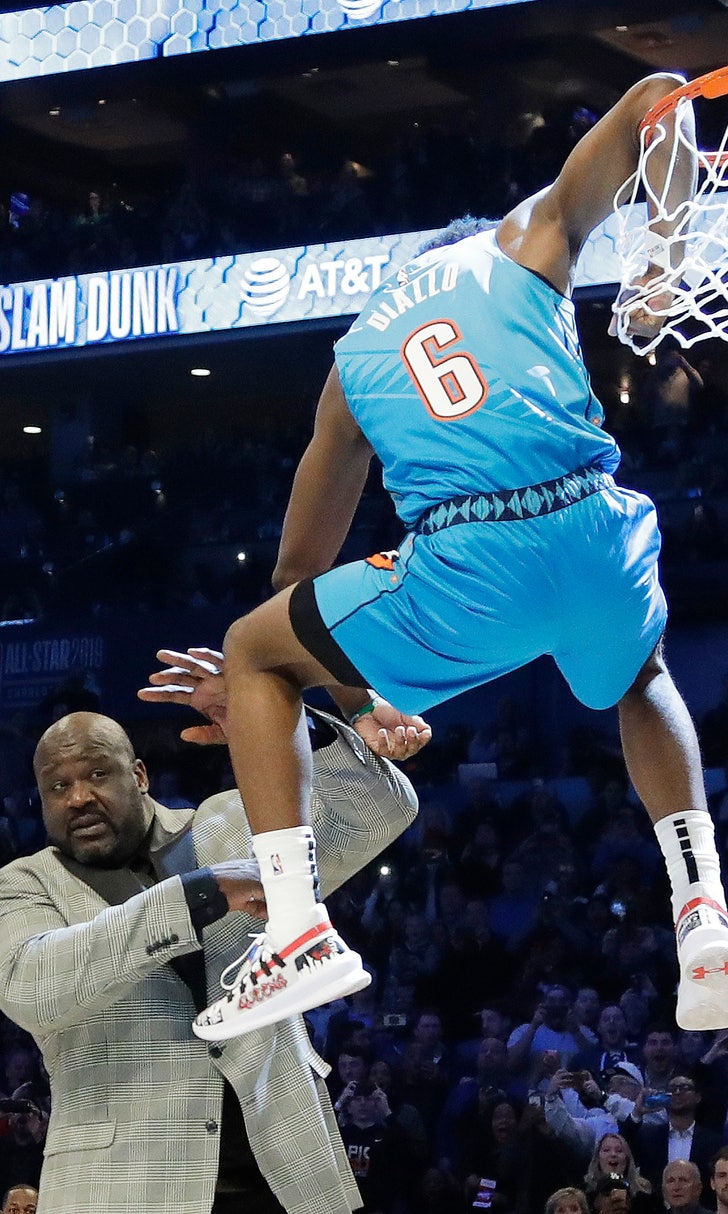 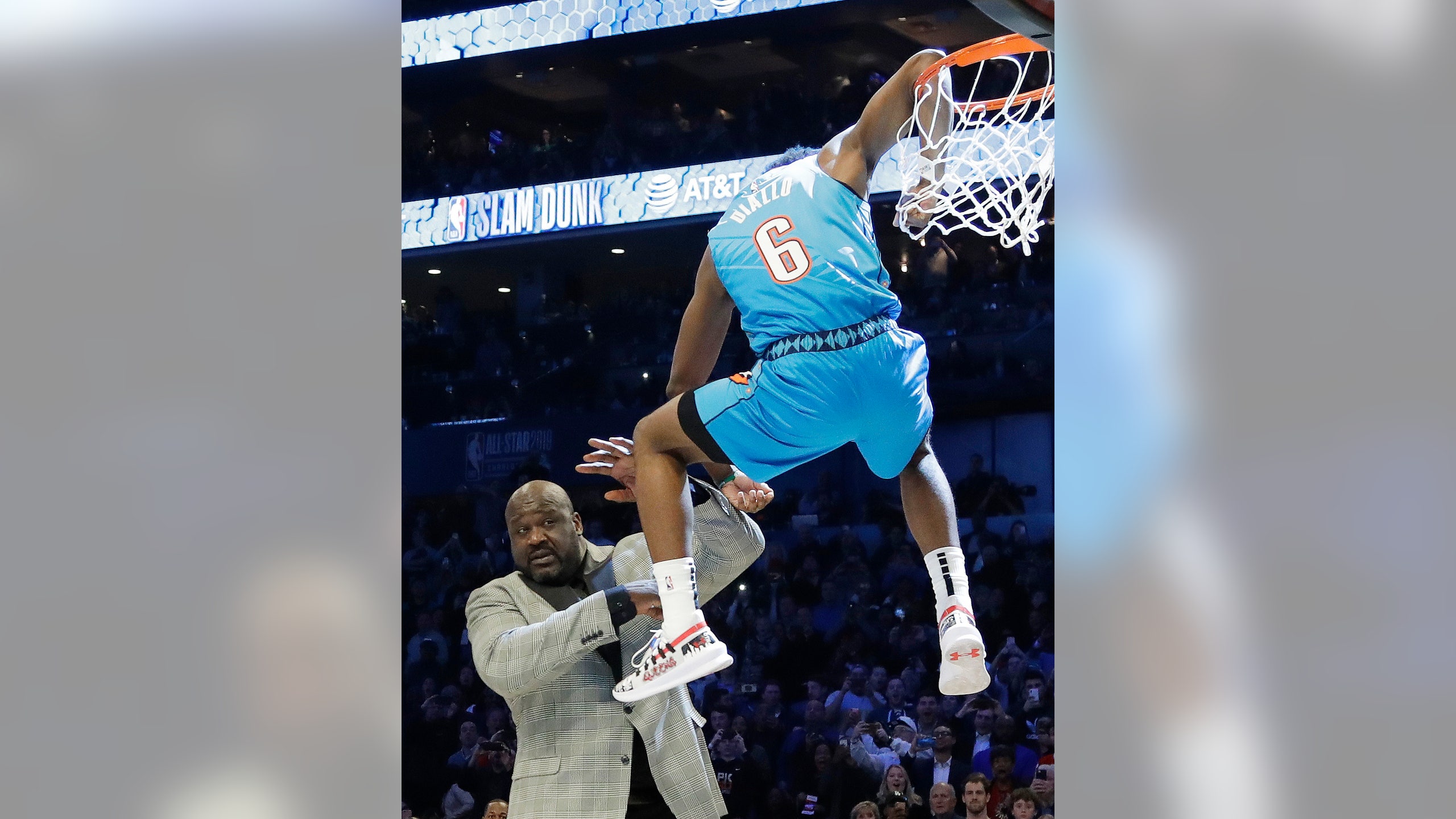 CHARLOTTE, N.C. (AP) — Boston's Jayson Tatum got his gamewinner from midcourt. Oklahoma City's Hamidou Diallo went over Shaquille O'Neal to help win his trophy. And Brooklyn's Joe Harris made all the shots at all the right times to deny Golden State's Stephen Curry a storybook ending in his hometown.

Say this for All-Star Saturday Night: It had flair.

Tatum won the skills competition, Diallo put on a show for the league's annual slam dunk title, and in easily the most anticipated part of the night Harris held off the Warriors' shooting star for the win in the 3-point contest.

Harris made 12 straight shots in the final round and went a staggering 15 for 18 on moneyballs — the shots worth the most — to win the 3-point title. He finished with 26 of a possible 34 points in the final round, beating Curry by two. Sacramento's Buddy Hield was third with 19 final-round points.

"Obviously, it's incredible," Harris said. "Steph is the greatest shooter of all time. But, again, shooting off of the rack for a minute is not indicative of being a better shooter than Steph Curry. I don't want anybody to get it twisted at all."

And the runner-up left a winner, too.

Stephen Curry and his brother Seth Curry of the Portland Trail Blazers had a bet where the winner of the 3-point contest — they were both entrants — would have to pay for tickets for the family over the rest of their careers.

Seth Curry didn't get out of the first round. He said that even though his brother didn't win, he'd pay up.

"It stands. He got that 27 in Round One and that's impressive," Seth Curry said. "He deserved to win the bet and I have to do what I got to do."

Stephen Curry won the first round with 27 points, making his last 10 shots. Hield was second with 26 points, and Harris finished with 25 to grab the last spot in the finals. And in a weekend where the Curry family — Dell Curry is a former Charlotte star, Steph is a three-time NBA champion, Seth is in the league and mother Sonya beat them all by making an underhand half-court shot Friday — was celebrated, the trophy finish didn't happen.

"I would have loved the storybook ending — Steph comes home and wins in his native Charlotte," Stephen Curry said. "That's how I had it in my head anyway."

Stephen Curry went a combined 37 for 50 in the two rounds, the best of anyone in the event. But Harris' timely makes of the moneyballs put him over the top.

"It's been an honor for me to be here, for me to participate in this weekend," Harris said. "And it's certainly something that I'll remember for a long time."

The night started with the skills challenge, and Tatum edged Atlanta rookie Trae Young in the final by making a shot from just past the midcourt stripe. Young was ahead of Tatum in the competition where players have to execute some passes, a layup and then a 3-pointer. So fearing that Young would make his 3 before Tatum could even get one off, he let it fly from about 50 feet.

"I didn't want to give Trae a chance," Tatum said. "I honestly didn't know I was going to hit the shot, but I had to give myself a chance and throw it up there. It worked out for the best."

When the skills challenge and 3-point contest cleared the floor, that left the dunkers. The slam dunk contest field of four — New York's Dennis Smith Jr., Oklahoma City's Hamidou Diallo, Charlotte's Miles Bridges and Atlanta's John Collins — was pared to Diallo and Smith for the final.

Diallo pulled off a dunk that will be talked about for years in the first round — dunking over Shaquille O'Neal, hanging on the rim by his elbow, then tearing open his jersey to reveal a "Superman" shirt underneath. And his first dunk of the final round had the top of his head at basically rim level, putting him in control after Smith failed to make a dunk in his debut try of the final.

Smith leapfrogged Miami's Dwyane Wade and took a lob from Stephen Curry to give himself a chance with his last dunk, getting a perfect score from the judges — and a round of boos from the crowd, many of whom weren't that impressed.

That left Diallo as the night's final participant. Diallo got rapper Quavo out of the crowd, put the ball in his hands, then grabbed it as he went airborne for the slam that sealed the title.

"Atmosphere was great," Diallo said. "Just came out and gave the crowd what it was looking for."

Why Pop and Kerr Spoke Out
Gregg Popovich and Steve Kerr aren't afraid to discuss social justice. Melissa Rohlin explains their desire to speak up.
14 hours ago