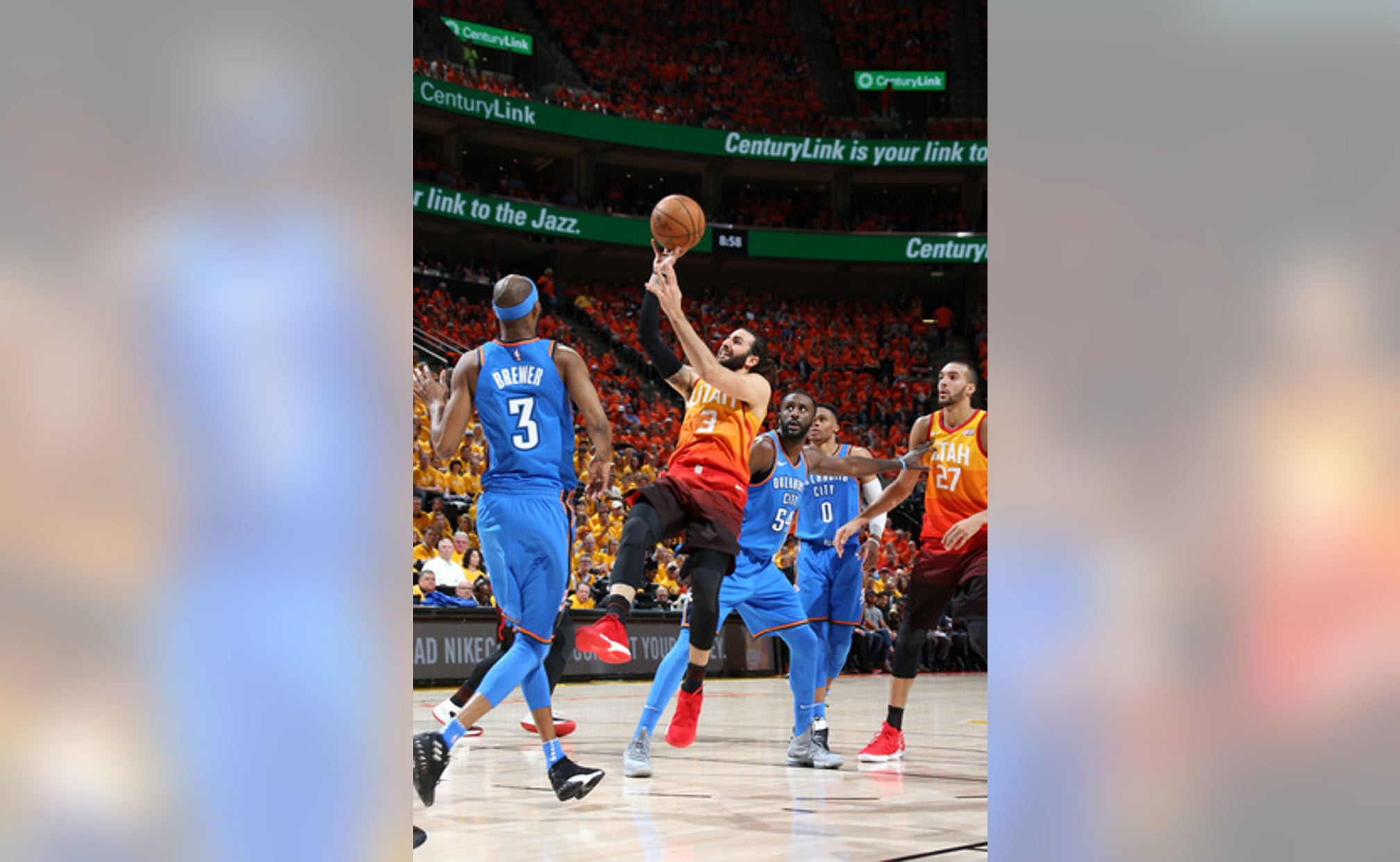 Rubio, who never reached the playoffs in his first six seasons with Minnesota, had 26 points, 11 rebounds and 10 assists for Utah's first playoff triple-double in 17 years to help lead the Jazz to a 115-102 win over the Oklahoma City Thunder on Saturday night.

''We were down by 10 ... and I just changed my mentality, trying to be more aggressive and make some shots,'' Rubio said. ''We made a run and it helps a lot when you're making shots and it felt great.''

At one point, Rubio walked toward half-court with his arms outstretched, drinking in the deafening roar and subsequent ''RU-BI-O! RU-BI-O!'' chants from the fans.

Donovan Mitchell added 22 points for Utah, which took a 2-1 lead in its first-round series with Oklahoma City.

Rubio has never been known as a knockdown shooter, but his recent accuracy has opened new opportunities for his playmaking.

''Ricky attacked,'' Utah coach Quin Snyder. ''He attacked, but with poise and he was making some shots. I thought he took good shots and it really stabilized our group.''

The Spaniard has previously recorded five triple-doubles in his career and has played in big EuroLeague and Olympic games, but different than the energy and pressure of the NBA playoffs.

Joe Ingles, who had 21 points, made two 3-pointers around two free throws to spark a 13-0 surge that ended on Mitchell's 3 to put Utah up by 20 points in the fourth quarter. The big run was just par for the course in a series characterized by large runs by one team, then countered by the other.

Rubio's triple-double was the first by a Jazz player in the postseason since John Stockton in the 2001 playoffs against Dallas.

''Having my name next to his name is an honor,'' Rubio said of joining the Hall of Famer in making franchise history. ''I have huge respect for him.''

Paul George scored 23 points and Carmelo Anthony, Russell Westbrook and Raymond Felton each had 14 for the Thunder. Westbrook also had 11 rebounds and nine assists, just missing his ninth playoff triple-double but also had eight turnovers and shot 5 for 17.

Rudy Gobert's dunk and pair of free throws capped a 9-0 run in the third quarter to give Utah an 84-70 lead. Minutes later, Rubio hit a running 28-foot 3-pointer to make it 89-75 entering the final period.

The Jazz changed coverages on Westbrook throughout the game and surprised the perennial All-Star with different players in his expected passing lanes.

Utah also outrebounded the Thunder 48-33 and seemed much quicker to the loose balls in the midst of a charged atmosphere. The Jazz's hustle plays energized the packed arena festooned in the colors of Southern Utah - red, orange and yellow.

Rubio, playing just his third playoff game in his seven-year NBA career, had 19 at the half and the Jazz led 58-53.

Asked if the Rubio might have an encore in Game 4, Westbrook defiantly declared that he would shut down any chance of that happening.

Thunder: Oklahoma City was outscored 30-14 after Adams sat down with his third foul early in the second quarter. ... Both Adams and Mitchell picked up their fourth fouls in the first half of the third quarter. ... Adams finished with two rebounds. ... The Thunder shot 14 for 28 from 3-point range.

Jazz: Utah started the game by converting nine of its first 10 shots, then missed eight of the next nine. ... Royce O'Neale and George each got technicals for some pushing and words early in the fourth quarter. ... Carlos Boozer had the last triple-double for the Jazz in 2008, but it came in the regular season. ... Utah had 19 second-chance points to the Thunder's eight.

Ingles, who was a primary cog in Utah's offense as the Jazz got better and better throughout the season, was nearly invisible in the first two games against the defense of George. After only 16 total points and three assists in Oklahoma City, Ingles provided the offensive firepower down the stretch. ''I thought Joe just had a more aggressive mindset tonight,'' Snyder said. ''Joe just threw himself into the defensive end as well. When you do that, your offense kind of comes more naturally.''

WESTBROOK OUT OF SORTS?

Westbrook didn't take a shot in the fourth quarter, but said he doesn't have any specific physical injury. Some of his eight turnovers happened when he was headed to the rim with Gobert looming. ''I'm getting in trouble jumping in the air and getting caught,'' he said. Perhaps Gobert's defensive presence is making one of the game's most instinctive players think twice. ''I just try to make them think. Everyone in the league knows that I protect the rim. I know that they know,'' Gobert said.

Rubio arrived at the arena Saturday wearing a sweatshirt with the `Friends' sitcom logo. A team that emphasizes ''connectivity'', the Jazz moved in concert on offense and passes - even long skip passes - arrived in shooters' sweet spots ready for launch. In the postgame press conference, Rubio joked that he knew he was close to a triple-double, but Ingles missed a layup on purpose to thwart his effort. ''Luckily, I have Rudy Gobert on my team, too, and he made his shot,'' Rubio said.

Hollywood Headscratcher
Paul George's postseason play was shockingly uneven, creating question marks as to how he and his LA teammates move forward.
13 hours ago