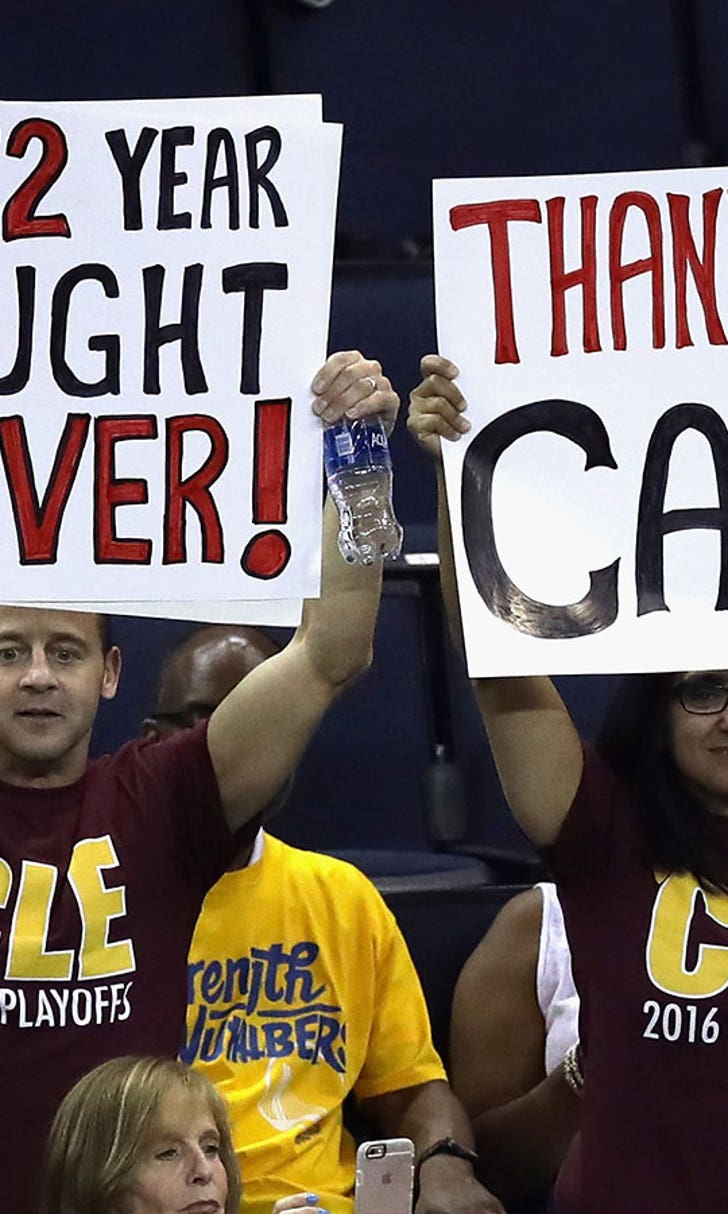 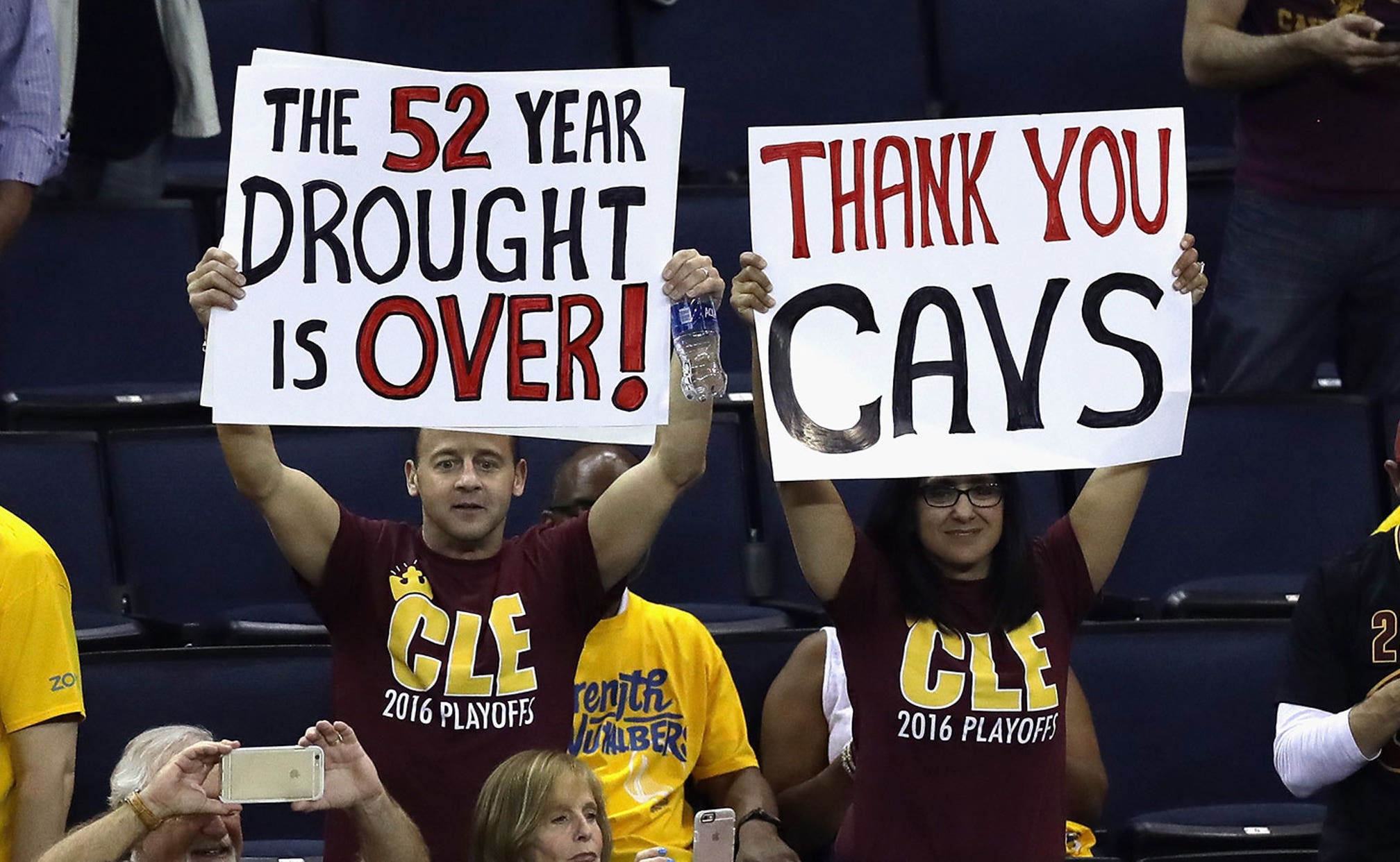 After a 52-year wait, Cleveland got the best kind of championship 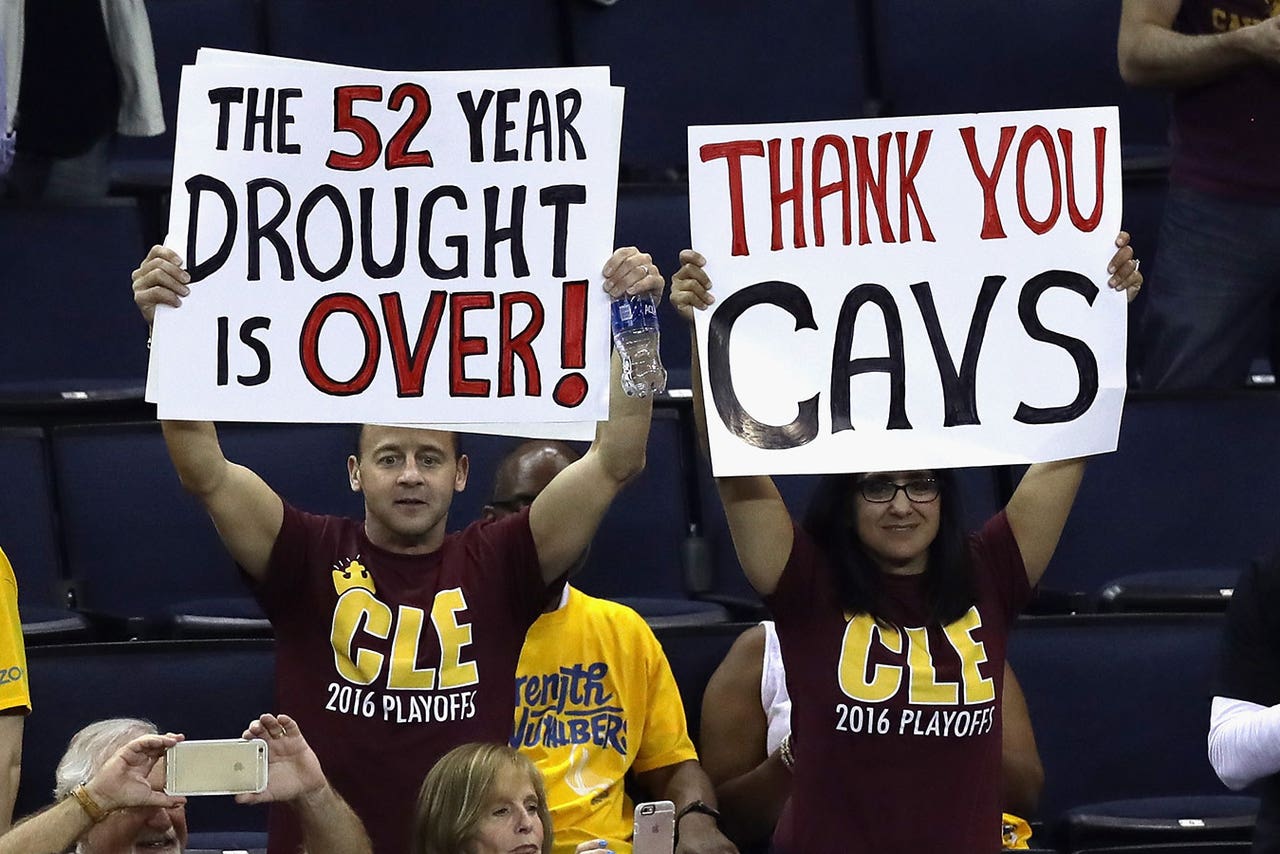 Follow the cues of your victorious 2016 world champion Cavaliers, who spent Sunday night in an Oracle Arena locker room dousing each other with bottles of Moet & Chandon, lighting up cigars and hugging family members -- jubilant but also visibly relieved.

"We're going to have to think of a better word for it," said an exhausted but beaming Iman Shumpert following his team's thrilling 93-89 Game 7 win over the Warriors.

There's no template for what ending a city's 52-year championship drought should look like, but surely this would not be it. Not with LeBron James and the Cavs becoming the first team in NBA Finals history to rally from a 3-1 deficit. Not by winning twice on the road against the most dominant regular-season team in NBA history, the 73-9 Golden State Warriors. 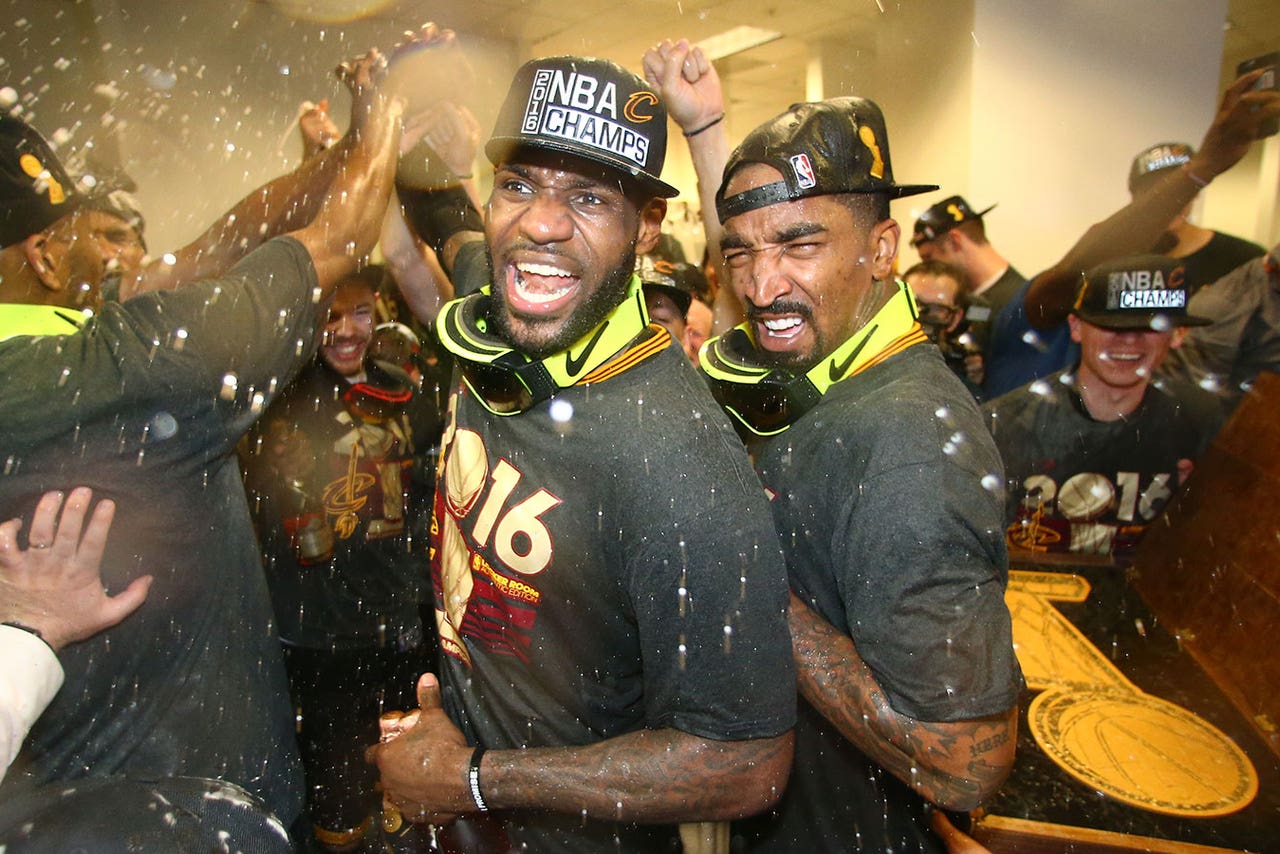 LeBron James and JR Smith were both overcome with emotion in the aftermath of the Cavs' Game 7 win.

The only way the basketball gods could have made this a taller task would be to import the '96 Bulls to the present and make Cleveland beat them, too.

"Anything can be done, man," Shumpert said. "Can't listen to the media, the social media -- it's not real. ... Nobody knew what we went through last year (losing 4-2 to the Warriors). They weren't in here. We know how you have to will yourself through this. This was two years of work with these guys."

A series with more twists and turns than a Cedar Point roller coaster -- Kevin Love's concussion, Draymond Green's suspension, Stephen Curry's mouthpiece toss, just to name a few -- culminated with a Game 7 for the ages. There would be 20 lead changes and 11 ties, a monstrous 32-point, 15-rebound performance by Green, and counterpunch after counterpunch from the indefatigable James.

When Curry hit a 27-foot three from the top of the key to tie it at 83-83 with 6:57 left, followed by Splash Brother Klay Thompson draining a long go-ahead jumper less than a minute later, the Oracle crowd could smell blood. Surely this would be the moment the home team finally squelched its pesky opponent.

But back came James, first with an and-one, then with a three, and now it was tied yet again, 89-89.

Four minutes to decide a championship. Who would flinch first?

Bucking a half-century of history -- not the team from Cleveland.

With 53 seconds left, Kyrie Irving rose up over Curry and drained what would be the game-winning three. Shortly thereafter, a team that left Oakland down 2-0 and looking completely outmatched two weeks earlier was improbably hoisting a trophy on the same court.

"I just remember when we were down 3-1, I think it was a 92 percent chance for Golden State to win it and 8 percent for us," said Irving. "Then it goes 3-2, then it goes 3-3, and now the odds change completely.

"I'm glad it happened this way. I'm really thankful that we got to play against a great team like the Golden State Warriors, that I can tell my daughter or I can tell my friends, my brothers, that we accomplished something that no other team has accomplished against a team that is star-studded that I have nothing but respect for." 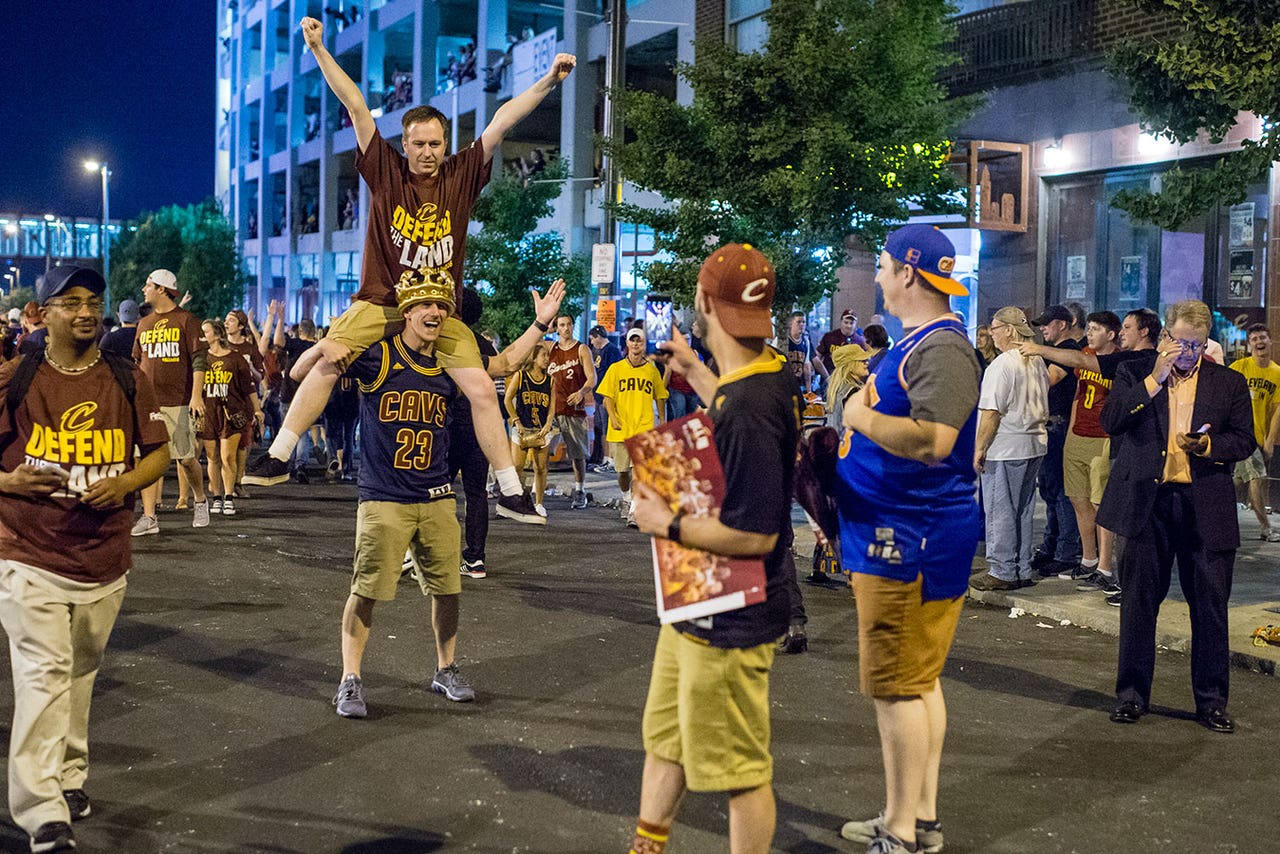 It's been a long time since Cleveland fans have been able to celebrate.

The road to the Cavs' historic triumph began long before this series started back on June 2. Arguably it dates to a TV interview six years earlier, the moment hometown hero James took his talents to South Beach and the city of Cleveland all but disowned him. Four dismal seasons followed before the King returned with his two newly earned rings and a heavy burden to land Cleveland one of its own.

"Not many people in the history of sports have said, 'Everyone get on my back. The city, state, organization, team, get on my back. If we win or fail I'll take the blame, but I'm going to lead you,'" Cavs forward Richard Jefferson said of his polarizing teammate.

Right up until a week ago, it looked like James would be taking more blame. Last year he got credit for even reaching the Finals with a short-handed team that lost 4-2 to the Warriors. He still might have gotten off easy this year, what with the acknowledgement that Oakland's team was even better than the year before.

But then came two lopsided Warriors victories to start the series, ones that seemed to expose the fundamental makeup of James' team, with Kevin Love's defensive shortcomings and J.R. Smith's questionable shot-taking. It was going to take a Herculean performance to lift the Cavs out of their 3-1 hole.

And that's exactly what happened. James delivered back-to-back 41-point masterpieces in Games 5 and 6 and would wind up leading both teams in points, rebounds, assists, steals and blocks over the course of the series. Irving scored 41 in Game 5, 23 in Game 6 and 26 in Game 7.

But this was always James' team, and Game 7 saw him deliver yet another masterpiece with 27 points, 11 assists, 10 rebounds, three blocks and two steals. The image of him surging from behind the play to deliver a monstrous block of Andre Iguodala with 1:50 remaining perfectly embodied the extent to which he dominated the last three games of the series.

"I thought he brought more force to the last three games than he did the first four," said Warriors coach Steve Kerr. "But he's one of the great players of all time and obviously was the key to the turnaround and had a great series."

Conversely, Warriors two-time MVP Curry rarely seemed like himself, no more so than late in Game 6 when James goaded him into a sixth foul, prompting the now-infamous mouthguard toss. It was as if the King was reclaiming his throne from the upstart who stole much of his spotlight the past two seasons.

In many minds, order was presumably restored with James supplanting Curry. Except that Cleveland winning a championship is the farthest thing from order. Not since the Browns won the 1964 NFL title (pre-Super Bowl) has the city been able to claim superiority in a major sport, and James, the prodigal son of Northeast Ohio, recited that history after Sunday's game.

"You could look back to the Earnest Byner fumble, (John) Elway going 99 yards, to Jose Mesa not being able to close out in the bottom of the ninth, to the Cavs -- I was on that team, in 2007, us getting swept, and then last year us losing 4- 2. And so many more stories," he said. "... For us to be able to end this, end this drought, our fans deserve it. They deserve it. And it was for them."

With that, the drought is no longer a story, The Decision a finally forgotten moment. James is now a three-time NBA champion who at 31 is making a strong case for GOAT, Irving a 24-year-old superstar who's only getting started. It feels like the beginning of a new, more joyous era for the city of Cleveland.

And all it took was a historic comeback against an all-time great team to get here.

Celtics Live To Fight Another Day
Jayson Tatum is building quite a reputation, while the Heat officially have a problem. Here's what happened in Game 5.
8 hours ago

Locked in the King's Castle
Defense wins championships. And on Thursday, The King proved to the world that he wants to win a title now more than ever.
17 hours ago

The Man, The Myth, The Legend
Chris Broussard can't say enough about the dominance of Wilt Chamberlain in the latest edition of "You Kids Don't Know."
20 hours ago

The Kentucky Effect
The final four NBA teams have one thing in common. And it's a great sign for supporters of Big Blue Nation.
20 hours ago