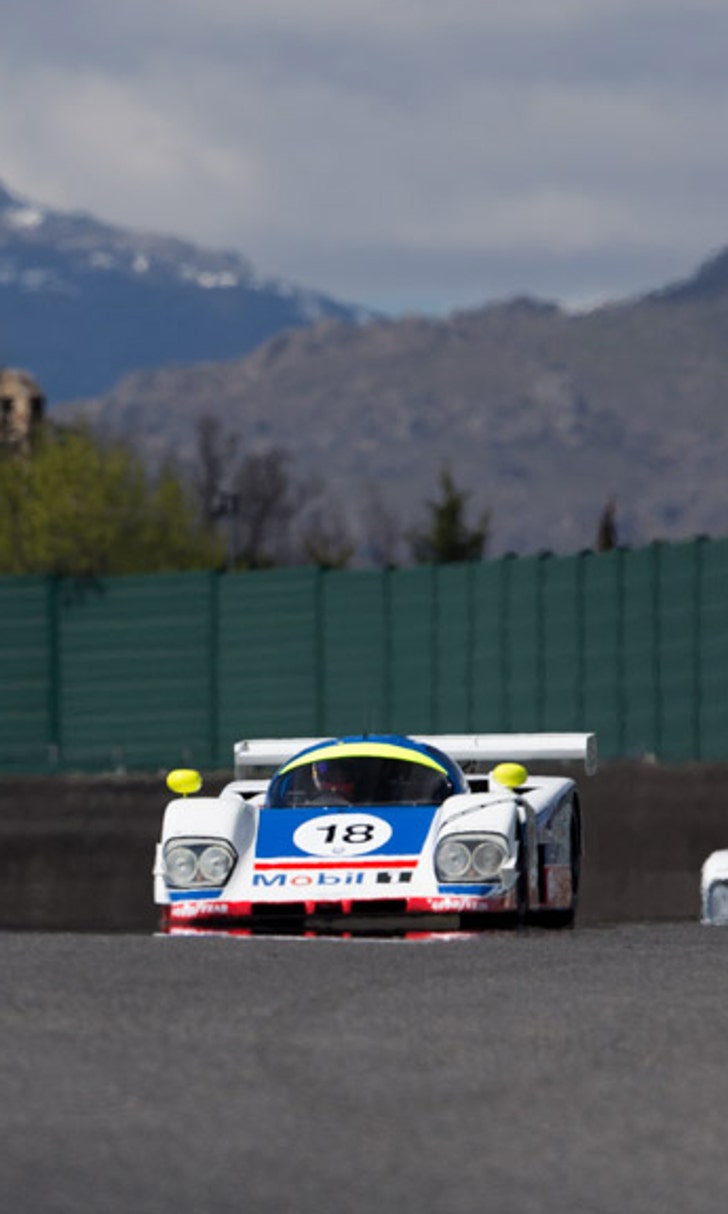 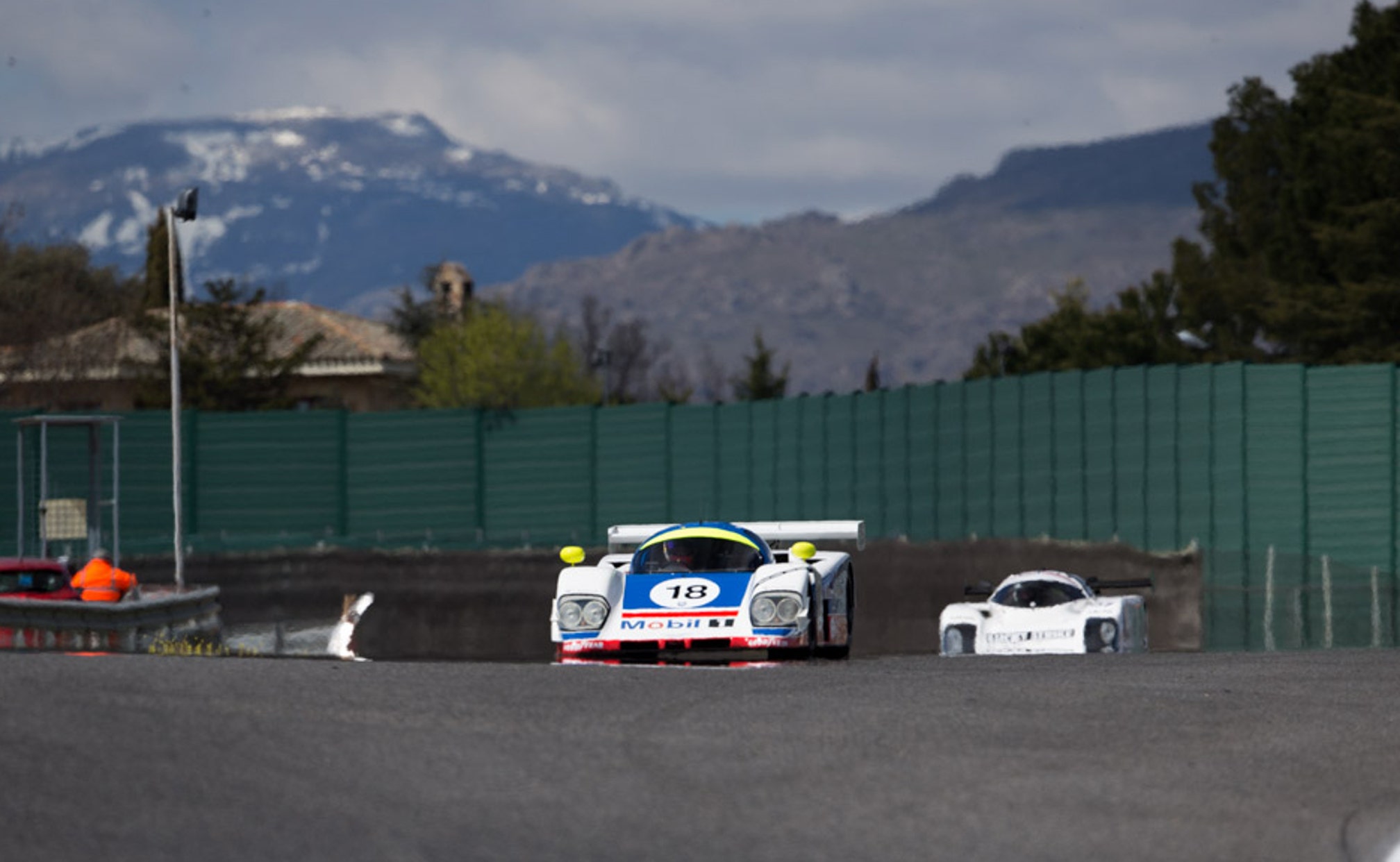 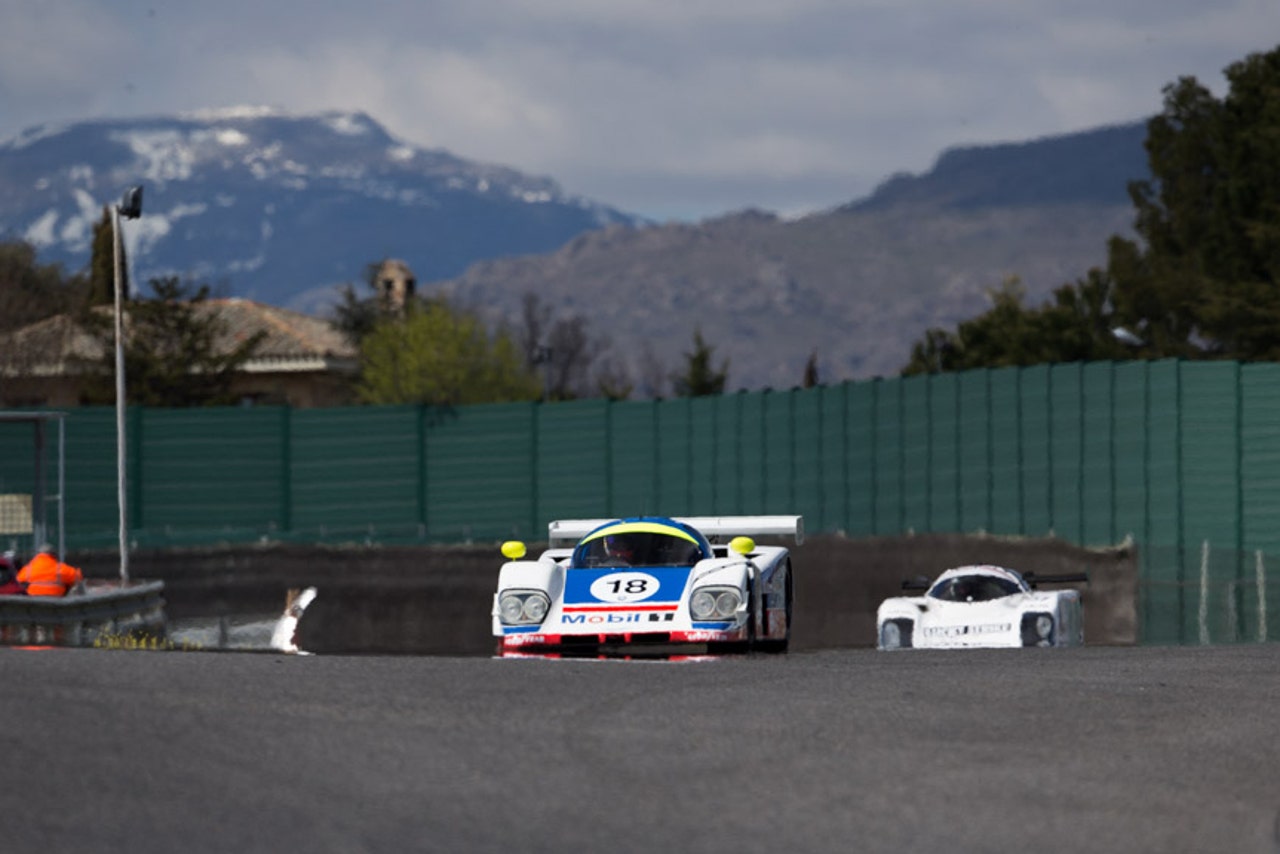 Adding a local touch to the Jarama Classic was the Iberian Historic Endurance grid, which featured two 50-minute races. Run on some of the most exciting tracks in Southern Europe, this group provides enthusiasts a relatively easy entry into historic racing. The very diverse grid featured anything from a proper Ford GT40 to a very wild looking Opel GT and a pair of Datsuns. The Iberian Historic Endurance regulars were joined by several eligible entrants from the Classic Endurance Racing 1 grid, including a Porsche 911 Carrera RSR 3.0 and the DeTomaso Pantera shared by Ralf Kelleners and Detlef von der Lieck. The German Pantera proved fastest of all and Kelleners charged away in the first of the two races before his car broke down just before the halfway mark. This allowed the Portuguese pairing of the Jose and Francisco Alburquerque to claim the overall victory in their ASM Team entered Ford GT40. The second race concluded the weekend's proceedings and once again saw the two Alburquerques take the victory in what was easily the most valuable machine in the field. 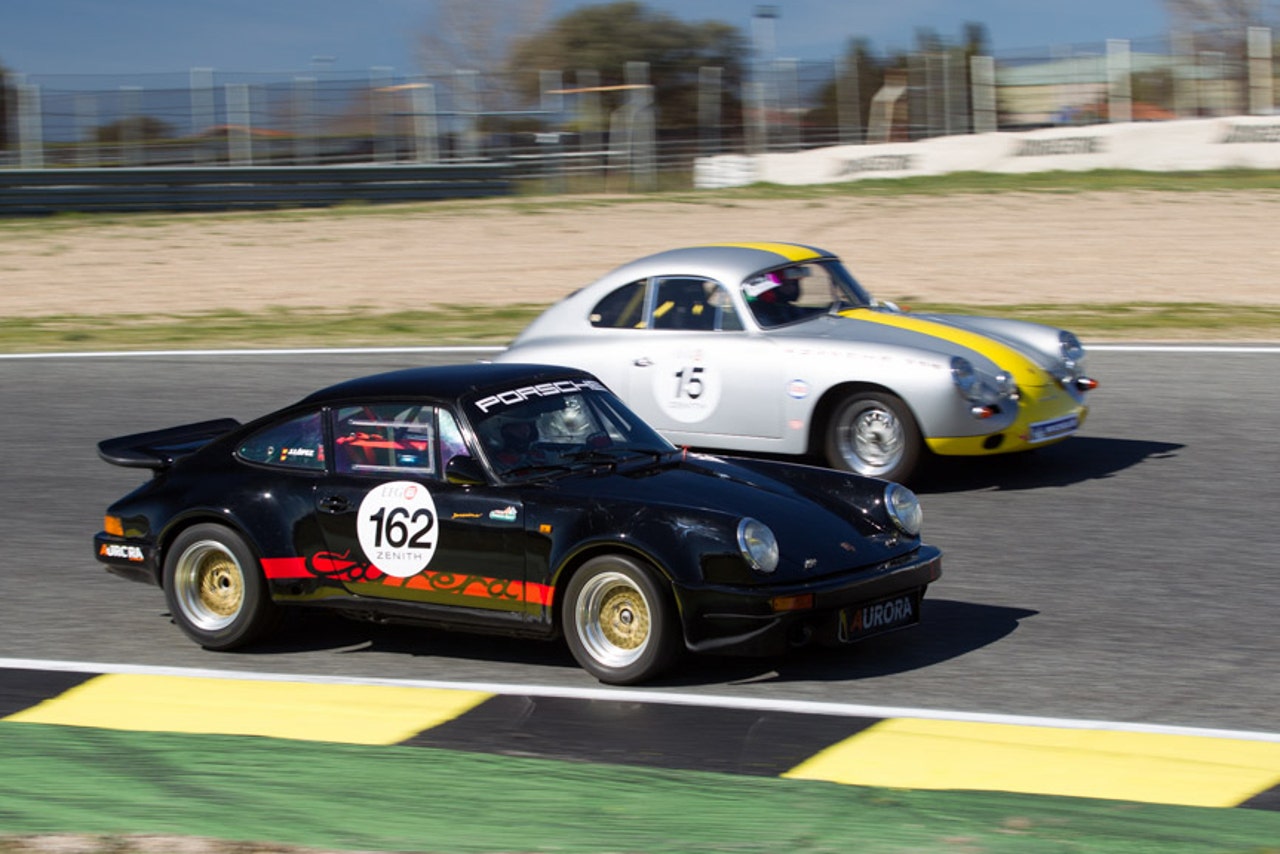 A traditional highlight of the Peter Auto events is the two-hour Sixties' Endurance event. With well over three dozen entries, it was also the largest field of the weekend and included anything from a fleet of Cobras to rarer machinery like a Lister Jaguar, a pair of 26R Lotus Elans and one of only three Morgan SLRs. Clinching pole position was the AC Shelby Cobra of Ludovic Caron and he also grabbed an early lead ahead of the similar machine shared by father and son France. Beautifully pacing the field, Caron was in control of the race until he lost all drive, forcing him to retire his Cobra. The Frances inherited the lead and, by the time Erwin handed the car to his father Pierre-Alain, there was a safe cushion. Running second was the Cobra started by Christophe van Riet despite having had to make an unscheduled pit-stop to fix a faulty plug lead. When car owner Christian Dumolin finally took over, there was a chance that Andrew Beverley in his Cobra could make up the deficit after a very solid drive from 10th on the grid, but a safety car and ultimately a red flag ended Beverley's charge. This saw the race finish with three Cobras on the podium despite the organizers’ attempts to slow them down through tighter regulations. 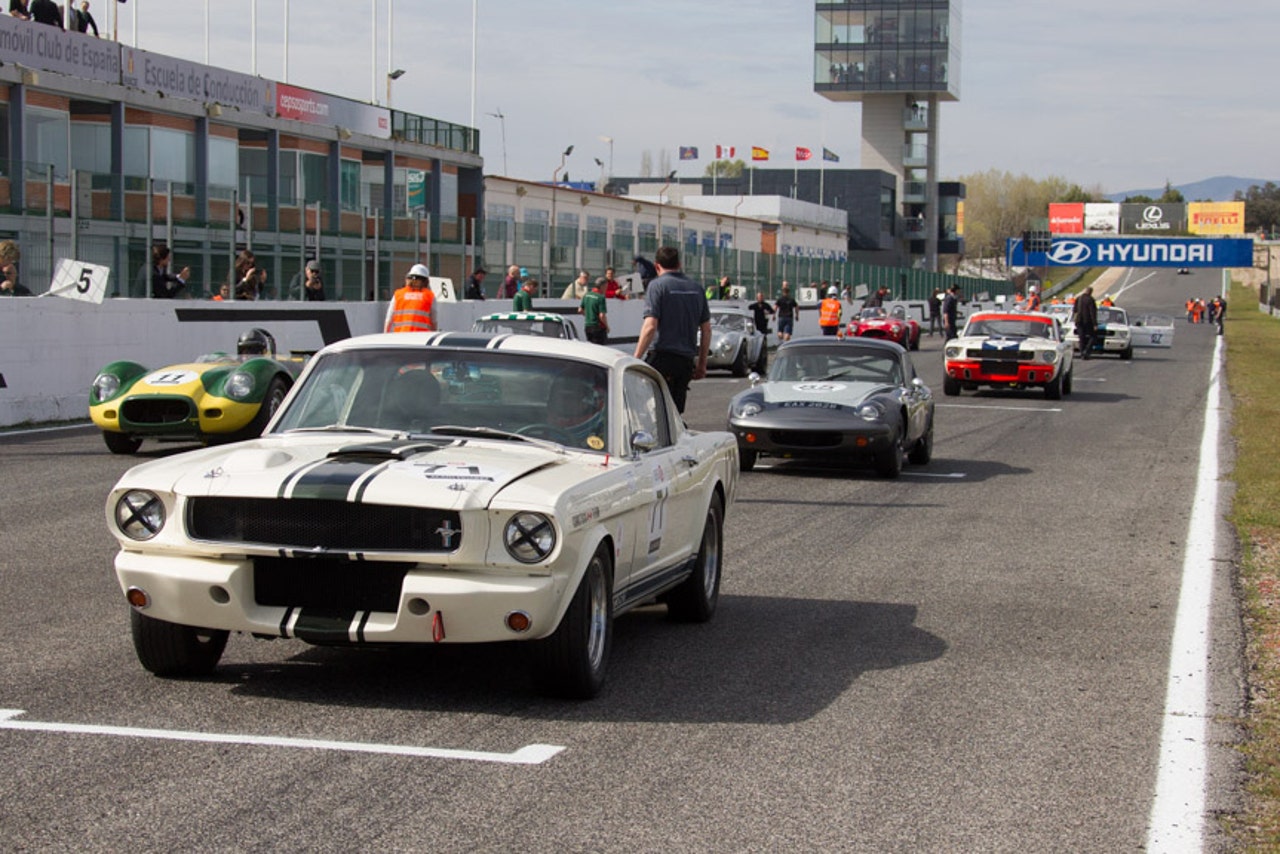 Claude Nahum and Bernard Thuner's Ford Shelby Mustang GT350R sits ahead of other cars on the grid ahead of the Sixties' Endurance race.

Open to some of the most evocative cars, the Trofeo Nastro Rosso has great potential but also often struggles to attract a large enough grid. Some of the entrants' concerns were addressed by reducing the two races from 45 to 35 minutes but nevertheless only 11 cars lined up for the Trofeo Nastro Rosso at the Jarama Classic. What the grid lacked in quantity was nevertheless made up by quality as the field boasted several Ferrari 250 GT SWBs, including the one-off Breadvan, a Ferrari 250 LM, a Porsche 356 Carrera Abarth and a Maserati Tipo 60 Birdcage that was new to the championship. The latter was most likely fitted with the larger, 2.8-liter engine from the Tipo 61 Birdcage as driver Guillermo Fierro actually managed to challenge Carlos Monteverde in the Ferrari 250 LM. No doubt helped by local knowledge, the Spaniard actually qualified on pole for the first race. After a close fight, Monteverde nevertheless charged through to claim victory in his bright yellow LM. Eager to do one better, Fierro made a jump start and received a 60-second penalty after the race. He need not have worried as Monteverde retired from the race after just six laps. With 60 seconds added to his time, Fierro was eventually classified sixth. Claiming a surprise win was Martin Halusa, who had looked quick all weekend with his 250 GT SWB Breadvan. 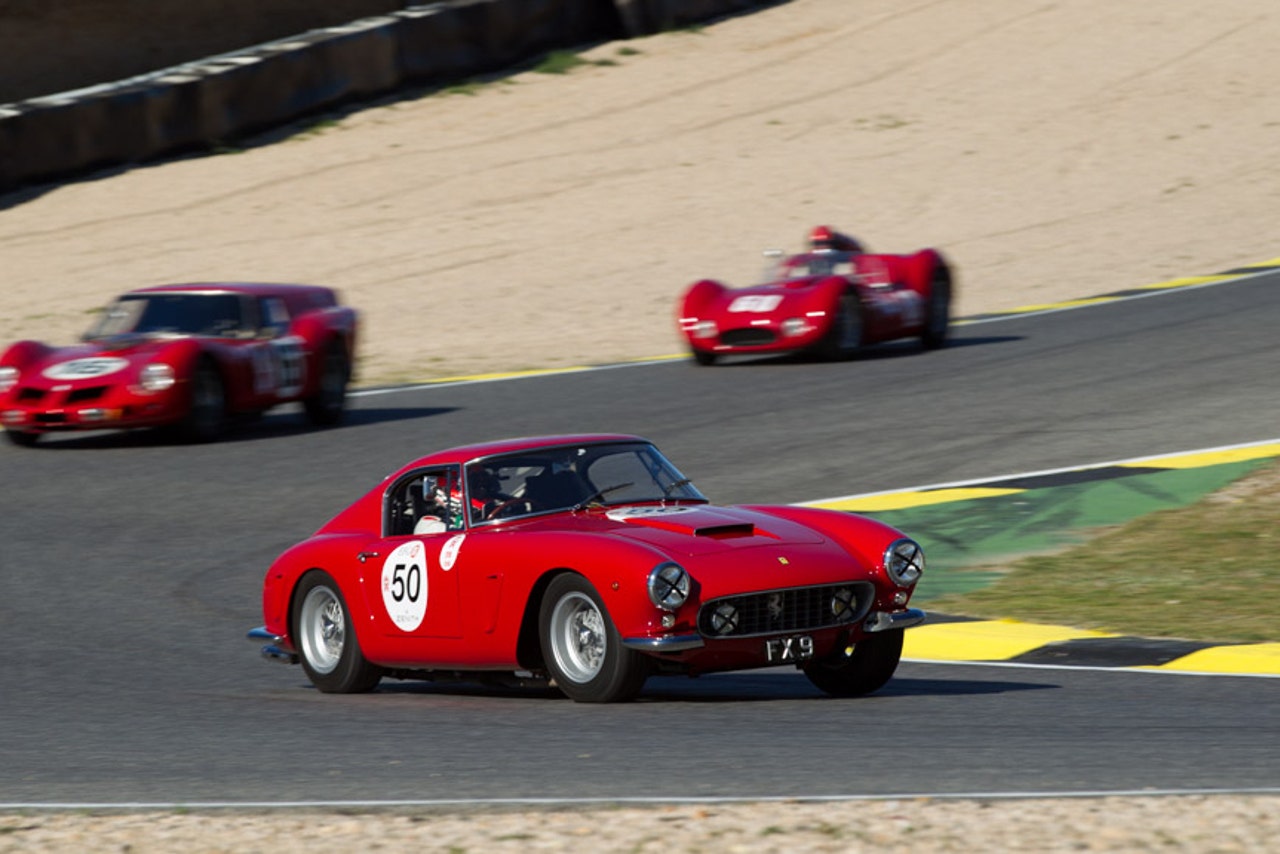 A colorful mix made up the grid for the Heritage Touring Cup for 1970s and 1980s touring cars. Among the many striking liveries was the red and yellow 'Ripolin' Ford Capri of Yves Scemama and the ex-Gerhard Berger, Marlboro backed BMW 635 CSi entered by Richard Hope and Geoff Steele. Also new to the field was the Capri built to the ultimate 24-valve configuration, campaigned by Carlos Monteverde and Gary Pearson. It proved fast, grabbing the lead briefly at the start of the one-hour race, but also fragile with a fuel pump failure prompting an early retirement. By that time, 2015 champion Steve Dance, in his Ford Capri, had already built up a comfortable lead and he did not falter when a brief shower towards the end made for a very slippery track. It was particularly great to see Yves Scemama in his Capri and Ben Gill in his lovely Ford Escort slice their way through the field. The former had not set a lap time in qualifying, so had to start from the back, while Gill made a mistake in the first corner, which forced him to let the entire field through. Their charges were in the awarded with a second and fourth respectively. 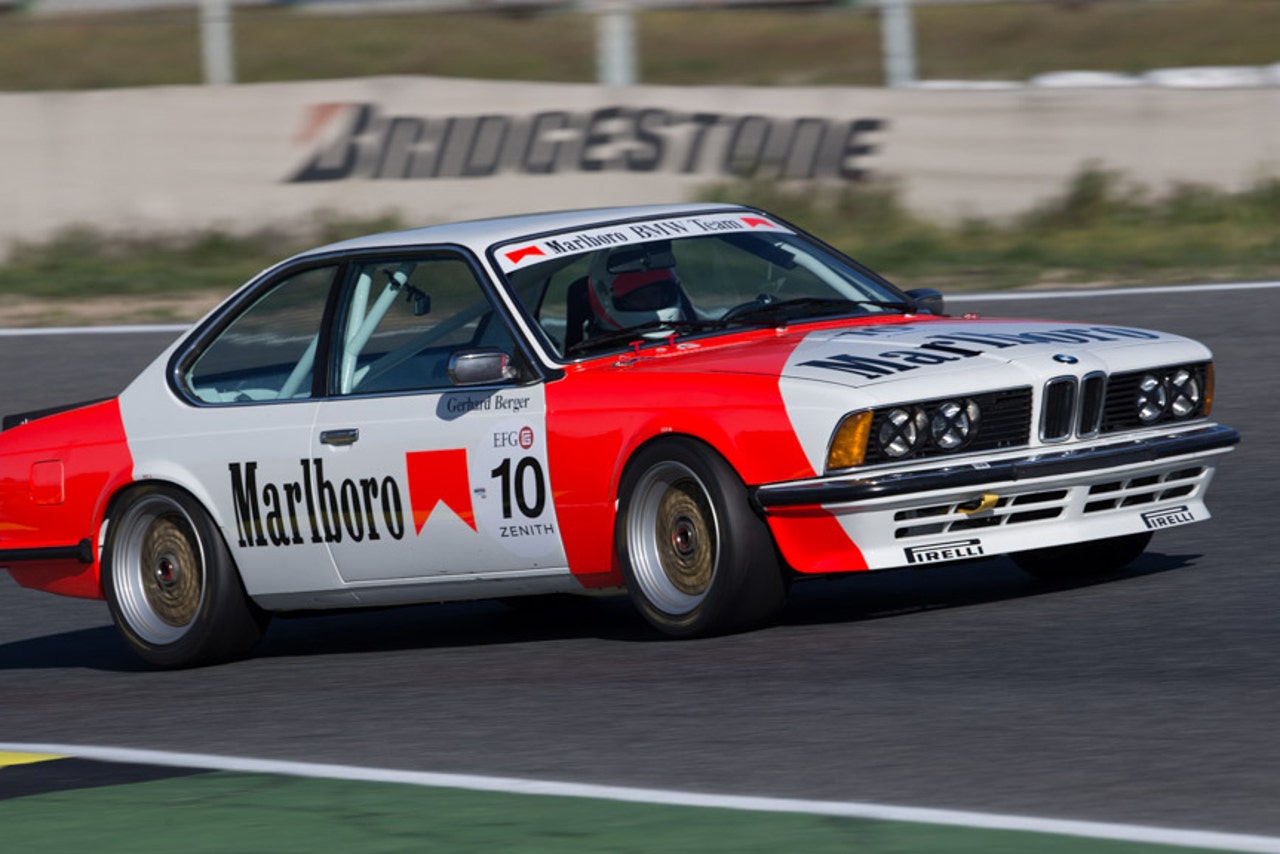 Richard Hope and Geoff Steel took turns behind the wheel of this BMW 635 CSi during the HTC event.

One of our absolute favorites, the Classic Endurance Racing 1 field, features prototypes from 1966 through to 1971 and GT cars through to 1974. Many of the cars entered were familiar but there are always a few new gems. At Jarama, these included the freshly restored and achingly beautiful Ford F3L shared by Claude Nahum and Bernard Thuner and the 1975 GT class winning 911 Carrera RSR 3.0 raced for the first time by Porsche aficionado Claudio Roddaro. At the sharp end of the field, however, it was business as usual with Martin O'Connell clinching pole position in Sandy Watson's Chevron B19, narrowly beating the Lola T70 Mk3b shared by Dickie Meaden and owner Grant Tromans. O'Connell grabbed the early lead and, instead of charging through on the straights in the more powerful T70, Meaden opted to stay behind the blue and DayGlo orange Chevron in an attempt to build up a large enough lead over the rest of the field before handing over to Tromans. The tactic proved quite successful and after a solid drive, Tromans only had to let Pedro Macedo Silva through in his open T70. As was so often the case in period, the GT podium was an all Porsche 911 affair with Raymond Narac and Michel Lecourt clinching the victory. 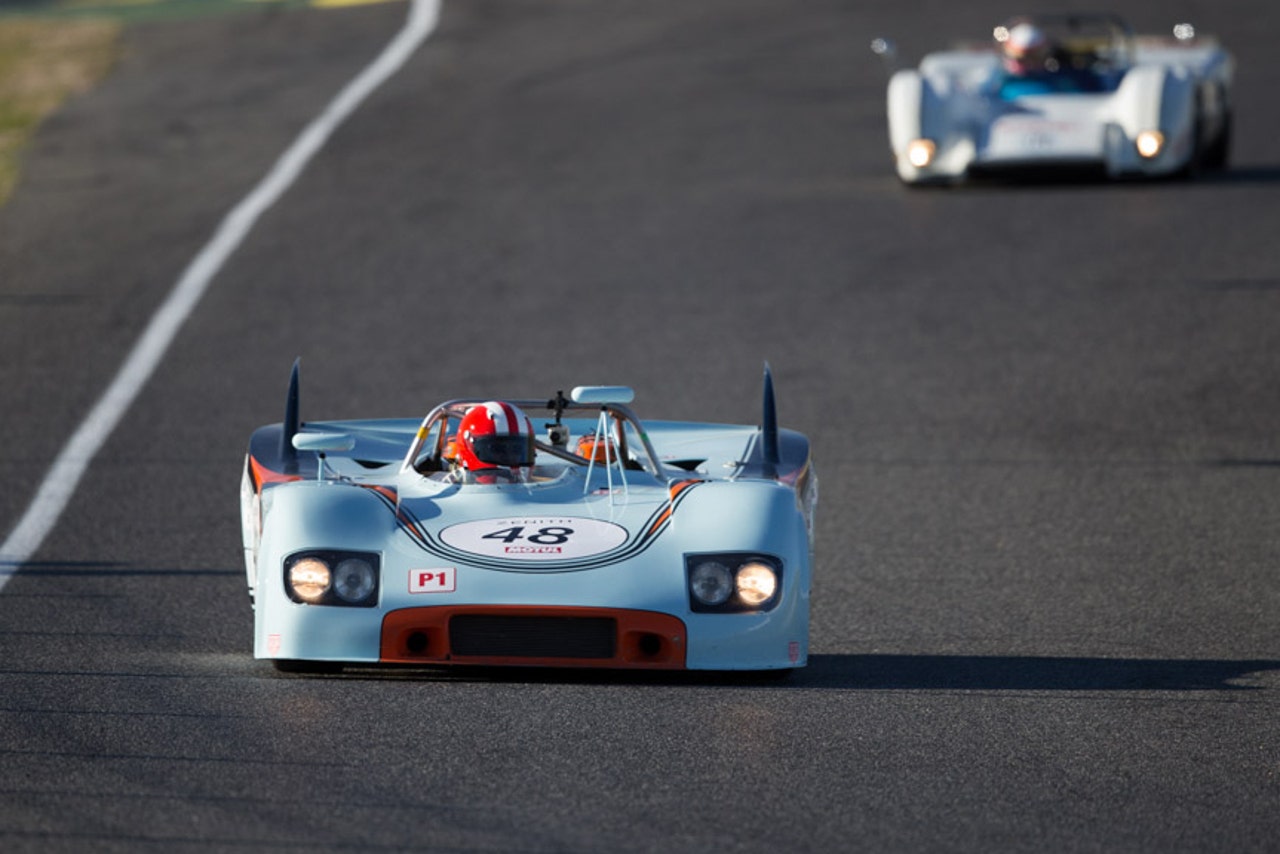 One of the smaller fields of the weekend lined up for the Classic Endurance Racing 2 on Sunday afternoon. Among the cars that did not make it to the grid was Franco Meiners' exquisite Group 5 Lancia Beta Montecarlo, as he opted to run his Lola T280 instead. The Lancia had just been restored and the Italian struggled to get heat into the one compound of rubber available for the unusual 19-inch wheels that were originally fitted to the Lancia. He did give it a proper try during qualifying but a broken gearshift lever made the decision to race his Lola instead easy. It was not without success as he would fight throughout the race with Dominique Guenat in his slightly later Lola T286 for what would be second and third. They changed order several times but ultimately, the tight race was settled in Guenat's favor after Meiners was nudged by a back-marker. Several seconds up the road, the race was won by Yves Scemama in his TOJ after pole-man Martin O'Connell suffered from reliability woes with his unique DFV-engined Chevron B23. Finishing fifth overall and first in the GT class was Belgian racer Christian Bouriez in his howling Ferrari 512 BBLM. 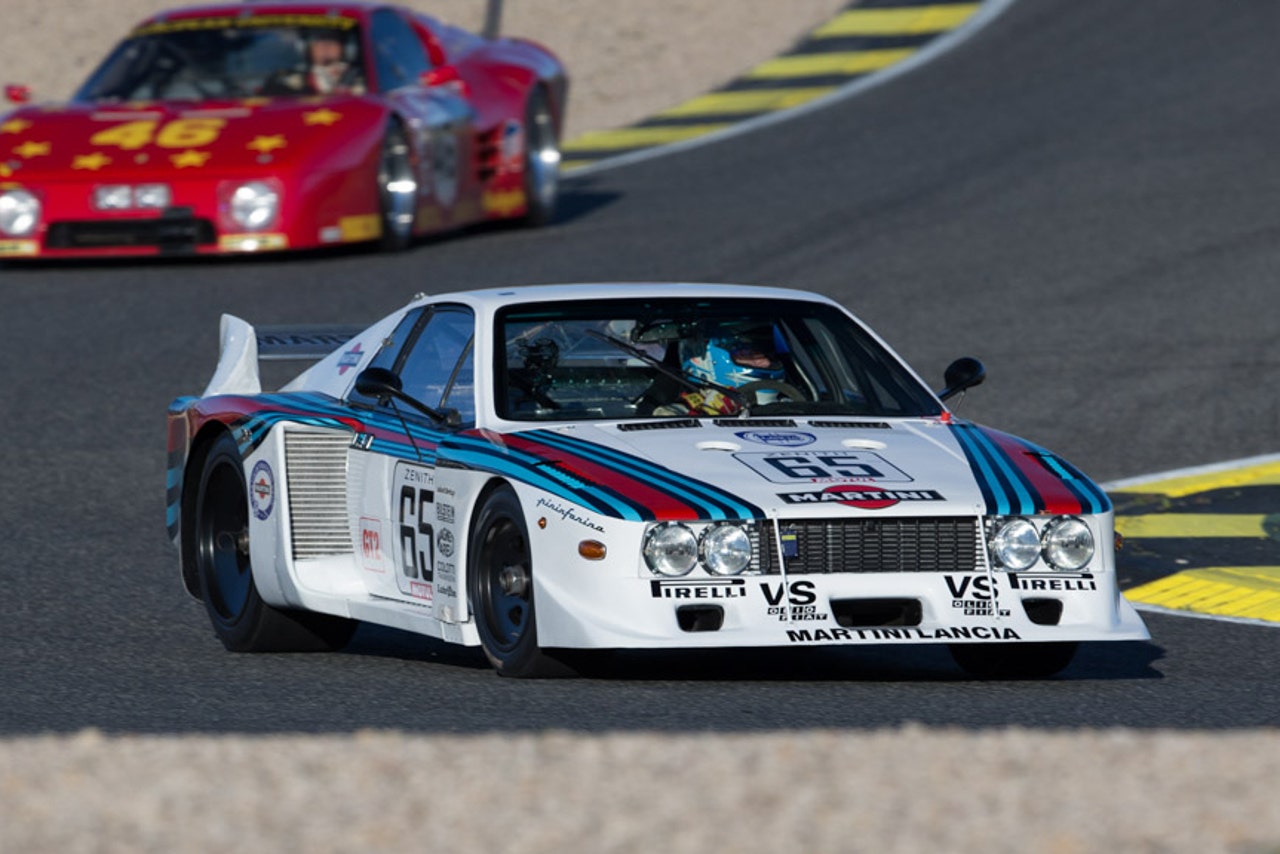 New to the Peter Auto fold, the Group C race was highly anticipated. Although a field of 40 cars is promised at the Le Mans Classic later this year, now only 14 cars lined up for the Jarama Classic. Fortunately, as with the Trofeo Nastro Rosso, the quality of the cars present was very high with the likes of a Peugeot 905, Aston Martin AMR1, Jaguar XJR-16 and several Porsche 962Cs all making an appearance. Perhaps the most significant and certainly the oldest car on the grid was the Rondeau shared by Mr. John of B. and David Ferrer. Completed early in 1982, it won that year's Monza 1000 km outright, which was the first ever race run under the newly introduced Group C regulations. Although driven well by its two owners, it was not surprising to see the Rondeau have no chance against the more modern machinery. In the two races, there was very little the rest could do to challenge the very quick Michael Lyons in the unique Cosworth DFZ-engined Gebhardt GTP car. In the first race Steve Tandy was second in his GTP Spice while Dominque Guenat finished third in the fabulous Peugeot. Perhaps tired after the exhausting battle with Meiners earlier in the day, Guenat sat out the second race, which saw Tandy finish second again, ahead of the Porsche 962 of father and son France, which had been delayed in race one. 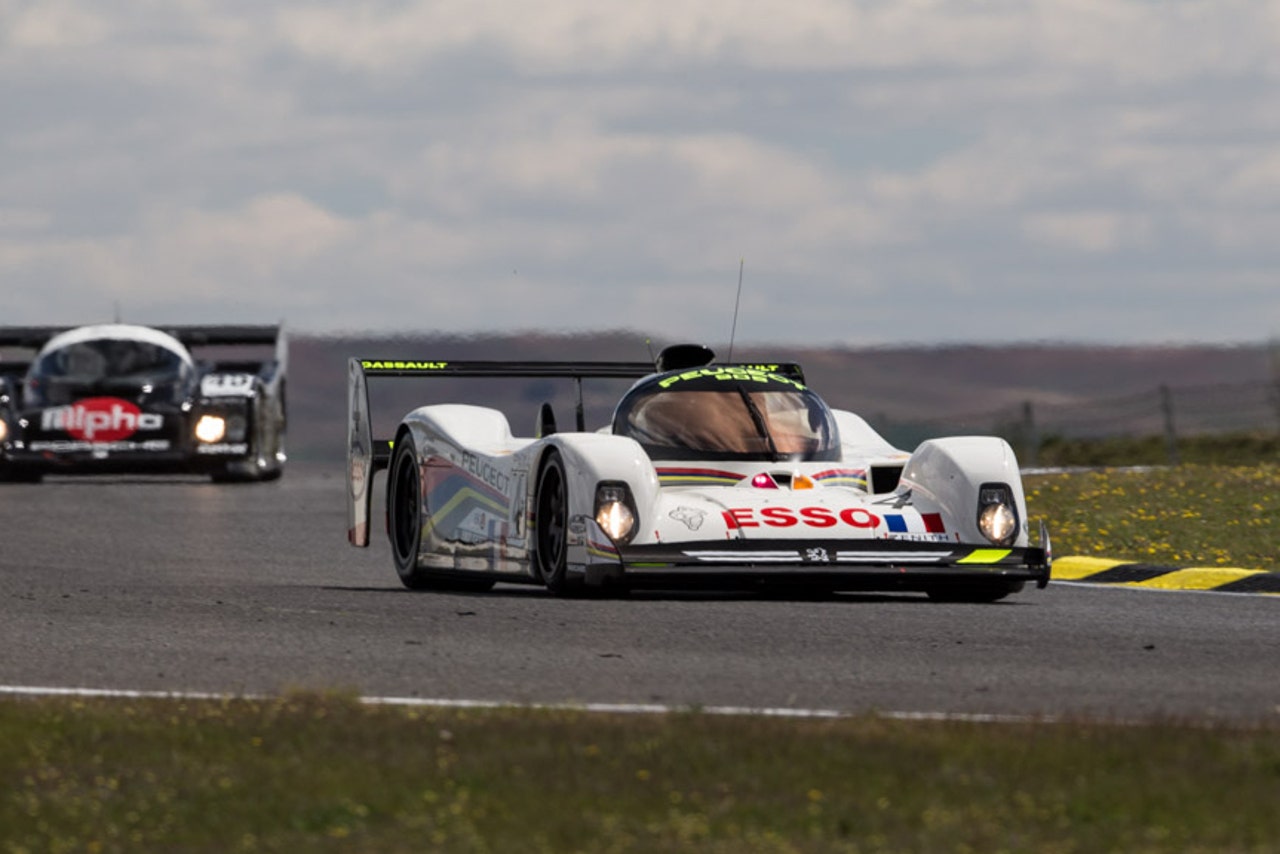 Dominique Guenat drives a Peugeot 905 during the Group C event.

For the enthusiasts from the Madrid area, the Jarama Classic provided a very rare opportunity to witness some of the continent's finest historic racing in the flesh. Some 10,000 of them did so and they were certainly treated to some excellent racing and superb machinery. The event was only let down by the slightly smaller grids but this is traditionally the case with the far away season opener, and this year the various turmoil in central Europe also made travelling difficult. As can be seen in this 240-shot gallery, there was still plenty of excitement to keep drivers and spectators alike very happy.