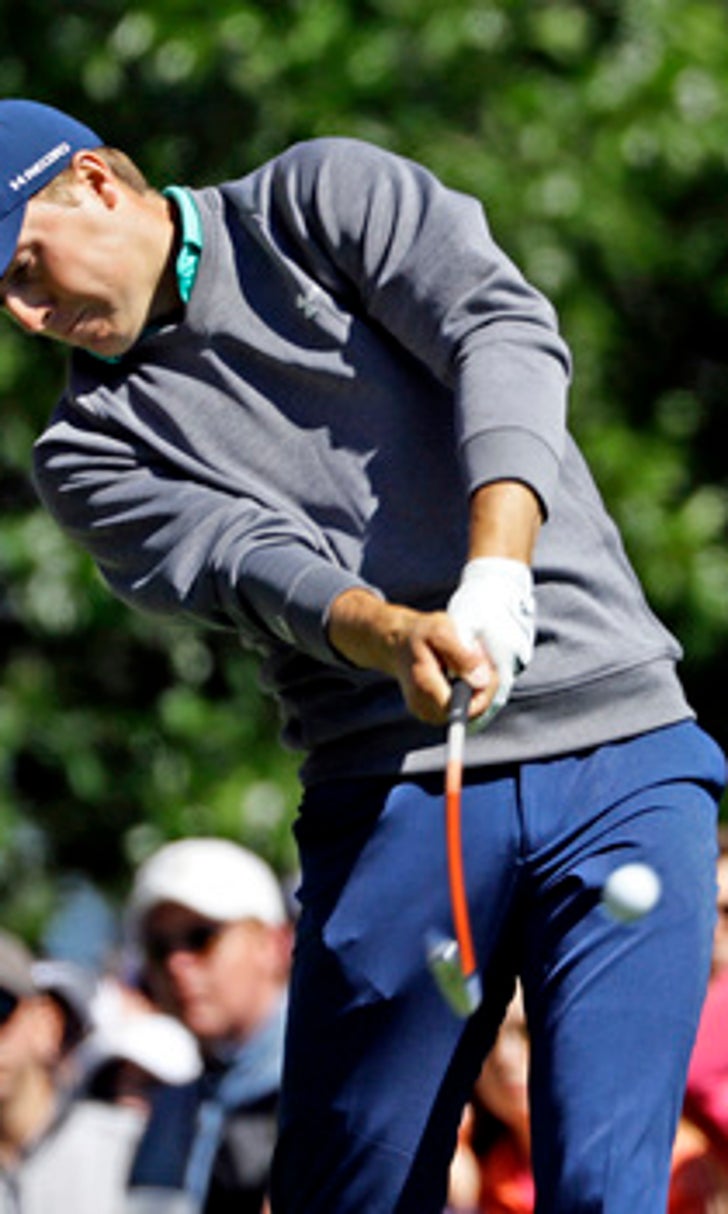 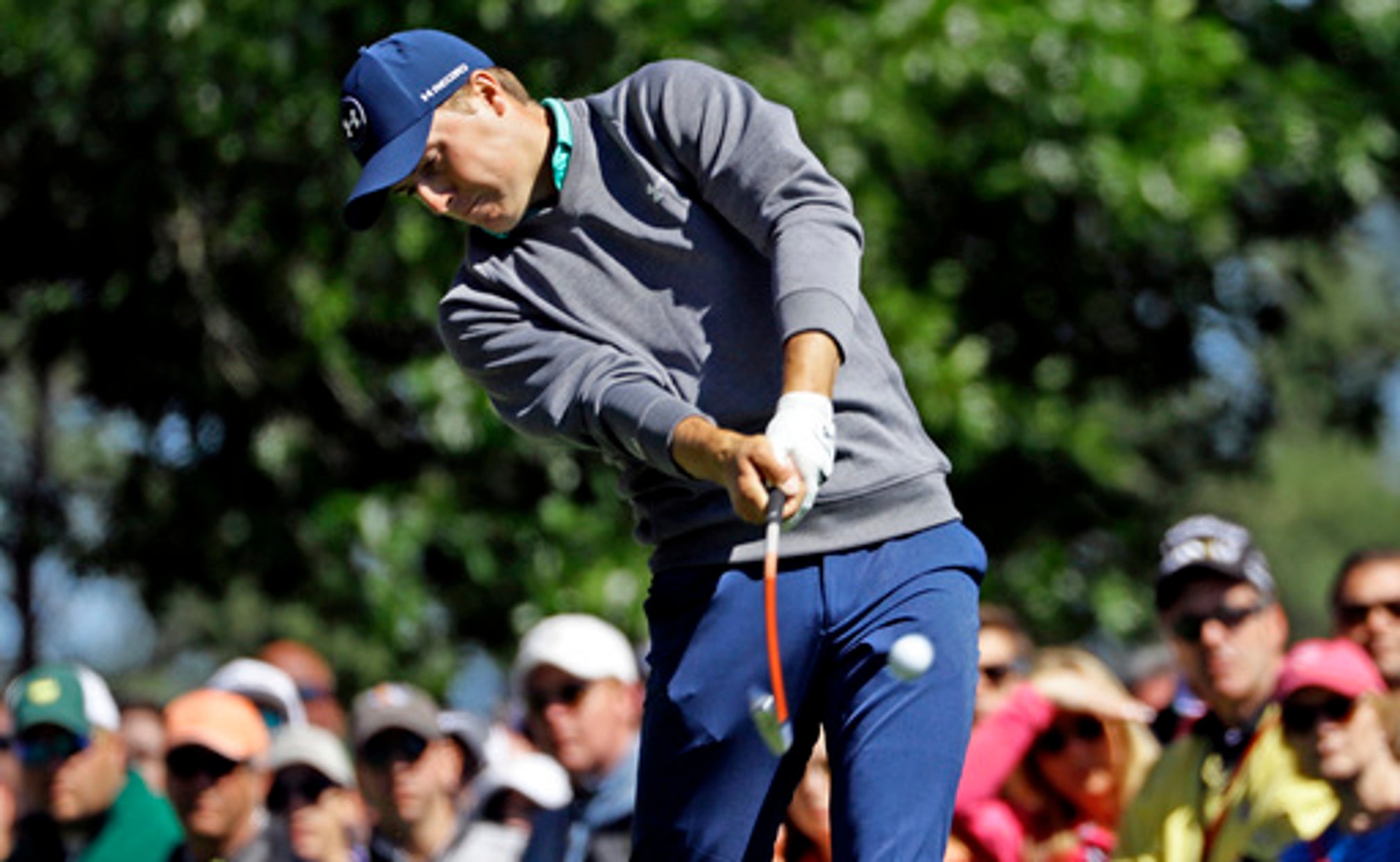 The Latest: Wind blasts Horschel's ball into water on 15 AUGUSTA, Ga. (AP) The Latest from the third round of the Masters on Saturday (all times local):

A sudden blast of wind turned Billy Horschel's birdie shot into a bogey after a gust pushed his ball into the water.

Horschel had marked his ball on the 15th green and then was preparing for the putt when it started rolling toward a slope and dropped into the water while he watched helplessly.

''It's just an unfortunate situation where a big ole gust came through,'' he said. ''I was a foot or two from a false front. It started rolling and the wind kept pushing it to the false front and it went in the water.

That was perhaps the most telling example of how the 20-mph hour winds, and powerful gusts, have affected players in the first three rounds.

Horschel said he expressed frustrations to the rules officials, noting he reframed from cursing at them, knowing it was nobody's fault. He says he can't remember anything like that happening to him before.

Leader Jordan Spieth took advantage of a favorable bounce at No. 4 to keep Rory McIlroy at bay and remain one of the few golfers in the third round at par or better.

Spieth saved par with an 8-footer at No. 4 after banging his tee shot off the grandstand to the left of the par-3 green. On the previous hole, the Texan made a 7-foot birdie putt to push his lead over McIlroy to three strokes.

Only three of the 57 players who made the cut are under par. In addition to Spieth, Hideki Matsuyama, and Louis Oosthuizen - the only player whose round is finished - are in the red.

Jordan Spieth and Rory McIlroy both have parred the first hole.

The day's final pairing teed off with Spieth holding a one-stroke lead over McIlroy, who's seeking to complete the career Grand Slam.

Spieth is already the first player at Augusta National to have the outright lead in six straight rounds. He's aiming to make it seven.

Scott Piercy and Brandt Snedeker are both two shots back at 2 under.

It's sunny and 66 degrees at Augusta National, where winds are approaching 20-mph with gusts closer to 30.

Bernhard Langer is the oldest player still competing at the Masters this weekend, and at the moment he's also the hottest.

The 58-year-old Langer is 2 under through five holes. Only three other players are under par in the round so far.

The two-time Masters champion birdied the second and fifth holes to move to within three strokes of leader Jordan Spieth.

Langer is one of three 50-somethings who made the cut, joining 57-year-old Larry Mize and 51-year-old Davis Love III.

The first player off on a cool morning and paired with a marker, Watson struggled to a 4-over 76 in the breezy conditions. That left him at 10-over 226 for the tournament and on pace for his worst performance in eight Master appearances.

Watson says ''the golf course beat me this year, so I've just got to improve, try to get better around this place.''

How tough are conditions at Augusta National? The players on the course are a cumulative 56-over par in the third round.

Looking more like a British Open, even on a sunny day with temperatures in the 60s, the Masters is posing quite a test for those who made it to the weekend. The wind is blowing at close to 20 mph, with gusts approaching 30 mph.

At the moment, only two players are under par: Justin Rose and Jamie Donaldson at 1 under.

The conditions could get a bit easier for those teeing off in the afternoon, though the baked-out greens will make putting treacherous for everyone. The forecast calls for the winds to decrease late in the day.

It's been quite a wild ride for 57-year-old Larry Mize in the third round of the Masters.

The 1987 Masters winner got started with three straight birdies, despite the howling wind at Augusta National. Then, reality set in. Mize bogeyed the next four holes, pushing his score back over par for the round.

Mize finally made his first par of the day at No. 8.

There are three 50-year-olds playing on the weekend. Mize is joined by 58-year-old Bernhard Langer and 51-year-old Larry Mize.

The wind is really howling at Augusta National.

Look for another day of high scores in the third round of the Masters.

With the wind blowing at 22 mph and gusting much higher, the flags are flapping and the patrons are all bundled up on a sunny Saturday, even with temperatures climbing into the mid-60s.

On Friday, no one broke 70 in a round for the first time since 2007. In fact, only four players managed to get under par.

The tough conditions didn't seem to bother 57-year-old Larry Mize, one of three 50-year-olds to make the cut. The 1987 Masters champion started the third round with three straight birdies.

Jordan Spieth and Rory McIlroy tee off in the final group of the day at 2:50 p.m. Spieth, the defending Masters champion, has a one-stroke lead on McIlroy, who is looking to complete the career Grand Slam.

The third round of the Masters is underway, though the leaders don't tee off until Saturday afternoon.

Two-time champion Bubba Watson, who needed a Jordan Spieth bogey to make it to the weekend, was the first to start after making the cut with a 6 over 150. He parred the first two holes.

Spieth, the leader and defending champ, hits the course with Rory McIlroy at 2:50 p.m.

The temperatures were in the upper 50s in the morning. The forecast calls for sunny skies and a sustained breeze of 20 mph, still calmer than the 30 mph gusts in the second round

Only four players broke par and no one broke 70 for the first time since the third round of the frigid 2007 tournament.

Maybe one of these days someone other than Jordan Spieth will sit atop the leaderboard.

The 22-year-old Texan battled through blustery conditions Friday to take a one-stroke edge over Rory McIlroy, making Spieth the first player in the history of Augusta National to have the lead all to himself in six straight rounds.

He was on top from wire to wire a year ago, capturing his first green jacket in romp, and he's held the top spot through the first 36 holes this year.

Spieth says, ''I have two more days to give it everything I have, and that's what we'll do, just to try to keep myself right on top.''