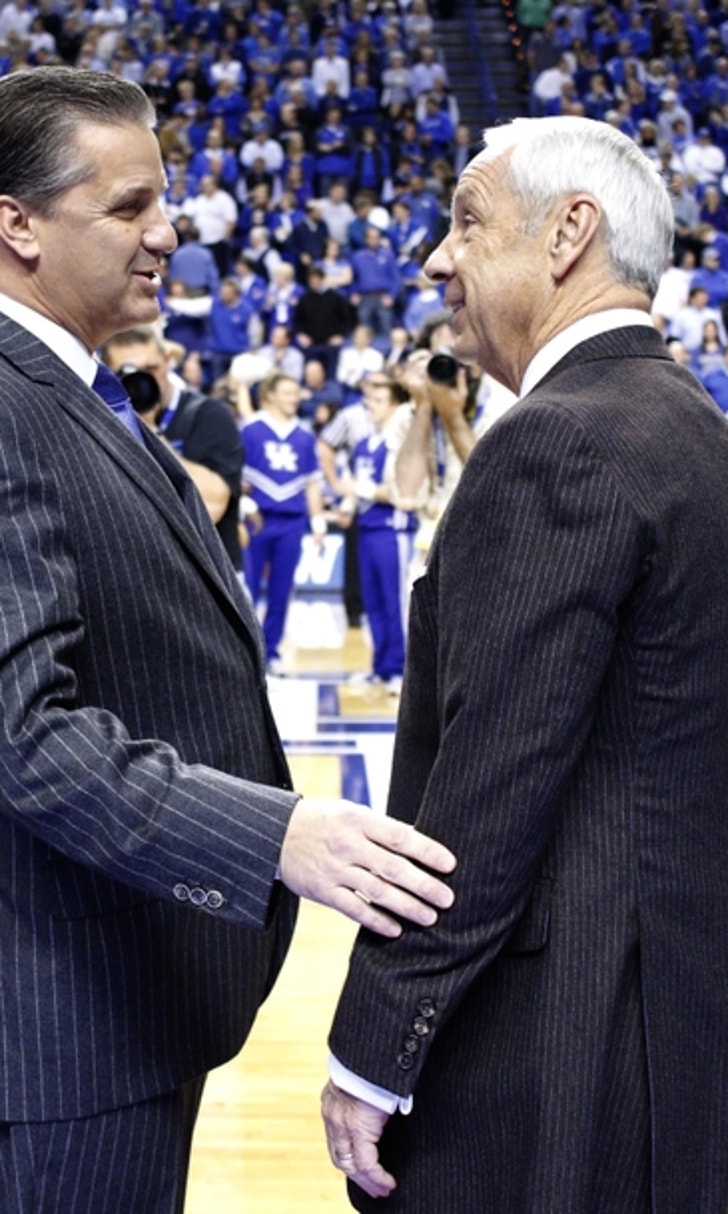 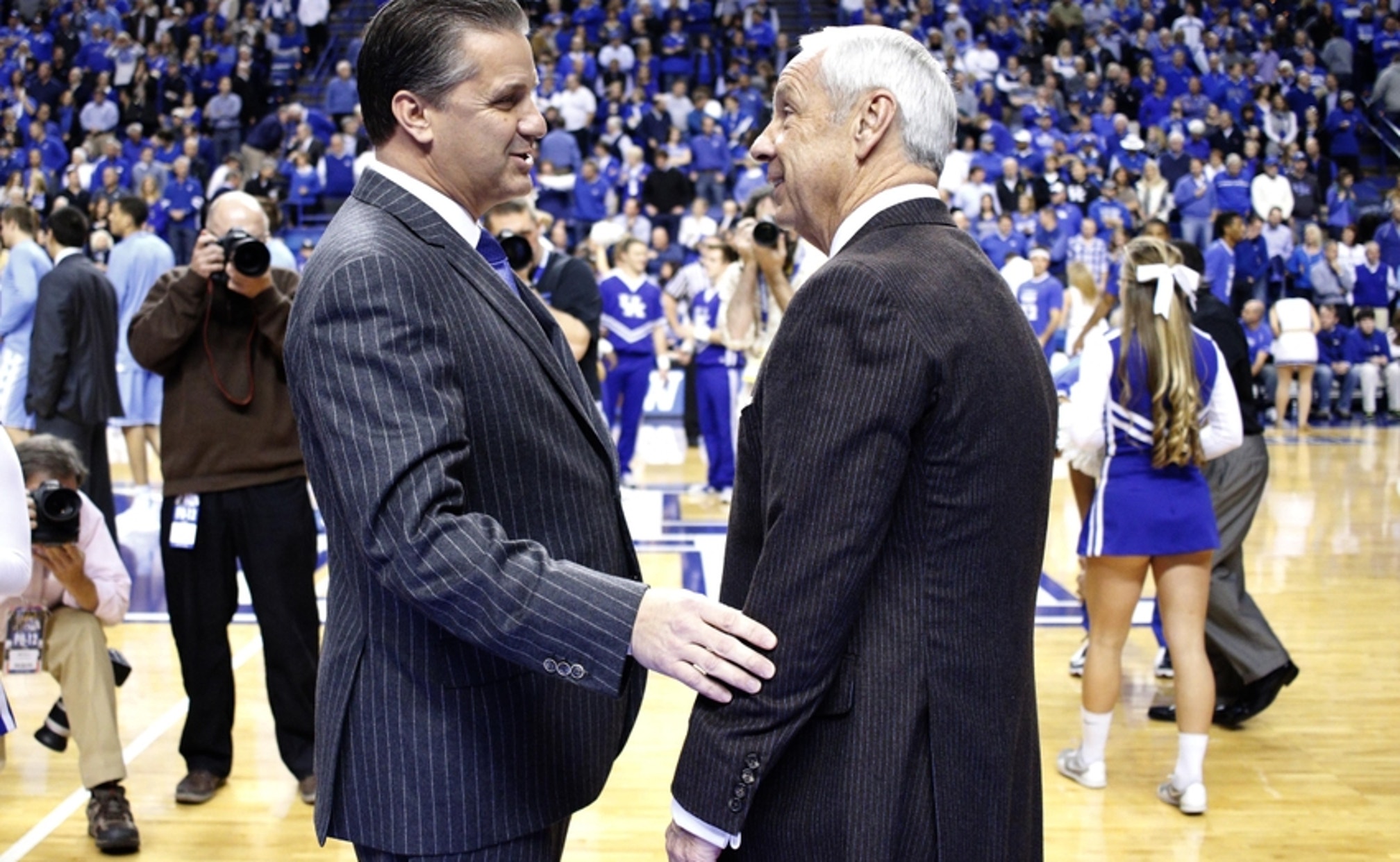 Roy Williams vs John Calipari: Who Has the Better Resume?

BY Fansided and Bryson Gordon/FanSided via Keeping It Heel • December 15, 2016
share

In this era of great college coaches, John Calipari and Roy Williams stand near the top. But who has the better resume?

Anytime the top coaches in college basketball are ranked, it is very likely to see Roy Williams, and John Calipari in the top ten, and in most cases, in the top five.

While these coaches are separated by nine years of age, in terms of head coaching years, coach Williams has only coached one more season than Calipari has. Had Calipari not been an NBA assistant for one season with the Philadelphia 76ers in 1999, they would be equal.

Calipari has made many stops along the way, beginning as a head coach at UMass in 1988.

Coach Cal has been at the helm of three college programs, and one NBA team. Calipari’s coaching stops go in order of UMass for eight seasons, the New Jersey Nets for three seasons, Memphis for nine seasons, and now Calipari has just begun his eighth season as the head coach of the Kentucky Wildcats.

While Calipari has had many of controversies along the way, it is awfully hard to dispute his good record as a college head coach.

As for Roy Williams, his head coaching career has only consisted of two schools, both of which are blue blood programs, the University of North Carolina, and Kansas University.

Coach Williams spent 15 seasons at Kansas and is currently on his 14th season as the head coach of the Tar Heels.

Many people have clamored that Roy Williams is extremely overrated over time, but his resume speaks for itself, prior to winning his first national title, Williams was harshly criticized for not being able to win “The Big One”, having lost the National Title game twice at Kansas.

The major comparisons include, overall record, conference titles and NCAA tournament appearances, Sweet 16’s, Elite 8’s, Final Fours, National Championships, and players in the NBA. Click on over to the next slide for the first comparison!

Roy Williams: Coach Williams has been a model of consistency. Since his first season in 1988, he has only had two seasons under twenty wins.

Williams will have a shot at matching that win total next season, staying on pace with his Kansas career. Over his career, Coach Williams has 793 wins, ranking him eighth all time.

His win percentage over his career is .790, which equates to 9th all time.

John Calipari:  Calipari also has only had two seasons under twenty wins, excluding the vacated season at Memphis.

Both of those seasons came in his first two seasons as a head coach at UMass.

While at UMass, even after struggling the first two seasons, Calipari racked up 189 wins, with a .730 win percentage. His eight seasons at UMass have been his statistically worst stop along the way.

At Memphis, Calipari had an incredible resume 214 wins, with a .759 win percentage over nine seasons. Calipari really made a name for himself while at Memphis. Kentucky has been an incredible success for John Calipari. In seven full seasons, and what has been played this year, Calipari has racked up 220 wins already. Coach Cal has 624 career wins to date, over 25 seasons.

Advantage: While both coaches have been extremely successful in all their stops, Roy Williams has been slightly better. If you adjust Calipari’s 25 seasons to the same amount of Williams 29 seasons, Coach Roy still would have a few more wins than Calipari.

Also Coach Williams win percentage is slightly better giving him the edge in this category.

Williams won nine in the Big 12, and the other seven in the ACC. Coach Roy has stated on many occasions that the regular season titles are important to him, despite how other coaches feel about them.

Advantage: This category goes to Coach Cal. Cal has done an incredible job over the years of keeping his players from playing down to their opponents level. In the A-10 it is hard to make the NCAA Tournament without a conference title, and Calipari’s teams left no doubt while at UMass.

Roy Williams: Coach Williams has done an incredible job navigating the madness that is the NCAA tournament. Coach Roy has managed to avoid the first round upset over his entire career, which is crazy to think about in this time of March Madness.

Williams has won two games, to get to the Sweet 16 seventeen times in his career. Coach Roy has also been to eight Final Fours, which is fourth all time.

And of course how could all Tar Heel fans forget the two national titles that Williams has won with UNC, which are his only two titles.

Many people criticize Calipari due to his inability to get his great teams to win the national title, but Coach Cal still has one title.

The glaring mistake on Calipari’s postseason resume is the inability to coach the 38-1 Kentucky team to win the national title two years ago.

Had Calipari won with that team, he would have had an undefeated national champion, which is something that is hard to deny.

Advantage: This category goes to Coach Williams, and it is not really close on this one. Maybe if Calipari had the undefeated title it would be close, but with only four Final Fours, compared to Williams’ eight, Coach Roy takes the cake on this one.

Roy Williams: Roy Williams has always been a top tier recruiter since his days at Kansas. He has proven his ability to bring in big time talent, even if the state of the program is bleak.

While at first glance, it may look like Williams has struggled, he has still gotten players into UNC that can contribute big time. In the 2016 class, he signed a consensus five-star Tony Bradley, and a couple of four stars in Seventh Woods, and Brandon Robinson, both of which have shown they can be big time players for the Heels, in the not too distant future.

In 2017, he already has five-star Jalek Felton, and is in the running for Kevin Knox, and Jarred Vandebilt, who are five-stars in their own right. Williams has pulled in at least one five-star player, in all but three years since he has been at UNC.

Williams, despite the circumstances over the last few seasons, has pulled in enough talent to keep the Heels in the top ten in the Country. If anything, something must be said about Coach Roy’s eye for good talent, not just his ability to recruit.

John Calipari: Many people in basketball circles believe John Calipari to be the best recruiter that college basketball has ever seen. Calipari’s salesman-like personality fits the recruiting trail perfectly. He is a coach that has reeled in talent no matter his location.

At UMass, he got the best player in Connecticut at the time, a household name to many basketball fans, Marcus Camby. While Camby brought much attention to UMass, and Calipari, most of which was negative, there was no disputing his playing ability.

While at Memphis, Calipari continued to recruit well. He brought in Derrick Rose, who was one of the most-highly touted players of his class, and turned him into a number one pick in the draft.

Rose also brought trouble to Memphis, but like Camby, he was hard to stop on the basketball court.

Kentucky has been Calipari’s strongest display of recruiting. While at Kentucky he has had players like Anthony Davis, Karl Anthony-Towns, Julius Randle, and John Wall.

According to 247Sports, Kentucky has had the number one recruiting class all but two seasons since Calipari has been at UK. He has also never been outside of the top two classes. His class ranking average has been 1.25!

Advantage: John Calipari takes this category, based off his success at not just Kentucky, but really every where he has been. While Memphis is no slight of a program, his last year at Memphis he had the second best recruiting class, according to 247Sports.com.

While one can question his X’s and O’s, there is no debating Calipari’s ranking among college hoops recruiters. Do not be surprised when Calipari retires to see him coming to your front porch to sell you something. He would probably thrive at that also!

Players in the NBA

Roy Williams: Williams has had twenty players drafted in his time at UNC, and sixteen at Kansas, bringing his total to 36 players drafted. Williams’ best player in the NBA is Paul Pierce, who won a championship with the Boston Celtics.

Several others have won an NBA championship including Danny Green, Harrison Barnes, and James Michael McAdoo. Williams has had a player drafted all but three of his seasons at UNC.

Apr 4, 2015; Indianapolis, IN, USA; Kentucky Wildcats head coach John Calipari on the court during the second half of the 2015 NCAA Men

John Calipari: Calipari is extremely heralded for being able to send players to the NBA. Calipari had three guys drafted while at UMass.

His total is at 39 players over all his years, which is solid for being at UMass, and Memphis for a lot of those years. Calipari’s best NBA player, while up for discussion, is probably Anthony Davis, who has been a young catalyst for the New Orleans Pelicans so far.

Advantage: Based off recent success, Calipari has the edge in this category. He is most likely to get even more players drafted this season. Whether you like his one and done style or not, there is no denying his ability to produce NBA talent.

He has also won a total of nine conference Coach of the Year award, seven with the Big 12, and two with the ACC. Also in 2006 he was inducted into the College Basketball Hall of Fame, and in 2007 he was inducted in the Naismith Hall of Fame. Coach Williams has rightfully racked up many awards, none of which amount to the endorsement of his mentor, and long time friend, the late Dean Smith.

In 2015, Coach Cal finally added the tag “Hall of Famer” to his name. While his brash style turns many people off, Calipari has rightfully deserved his title of a top five coach in the game.

Over their entire body of work, Roy Williams gets the nod as the better coach. Williams resume is extremely long and accomplished, and he has the two national titles that speak for themselves.

While Calipari is not that far off of Coach Roy’s resume, he has a little more catching up to do. Calipari will have plenty of time to do that, seeing as how he is nine years younger than Coach Williams.