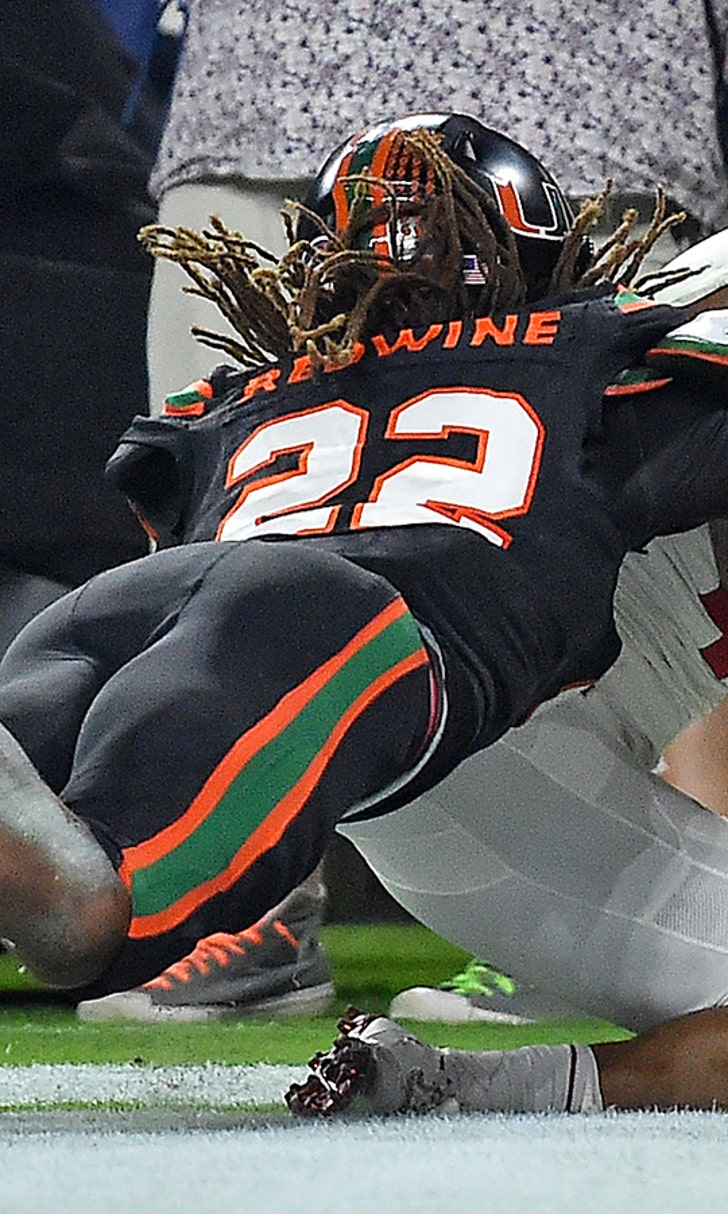 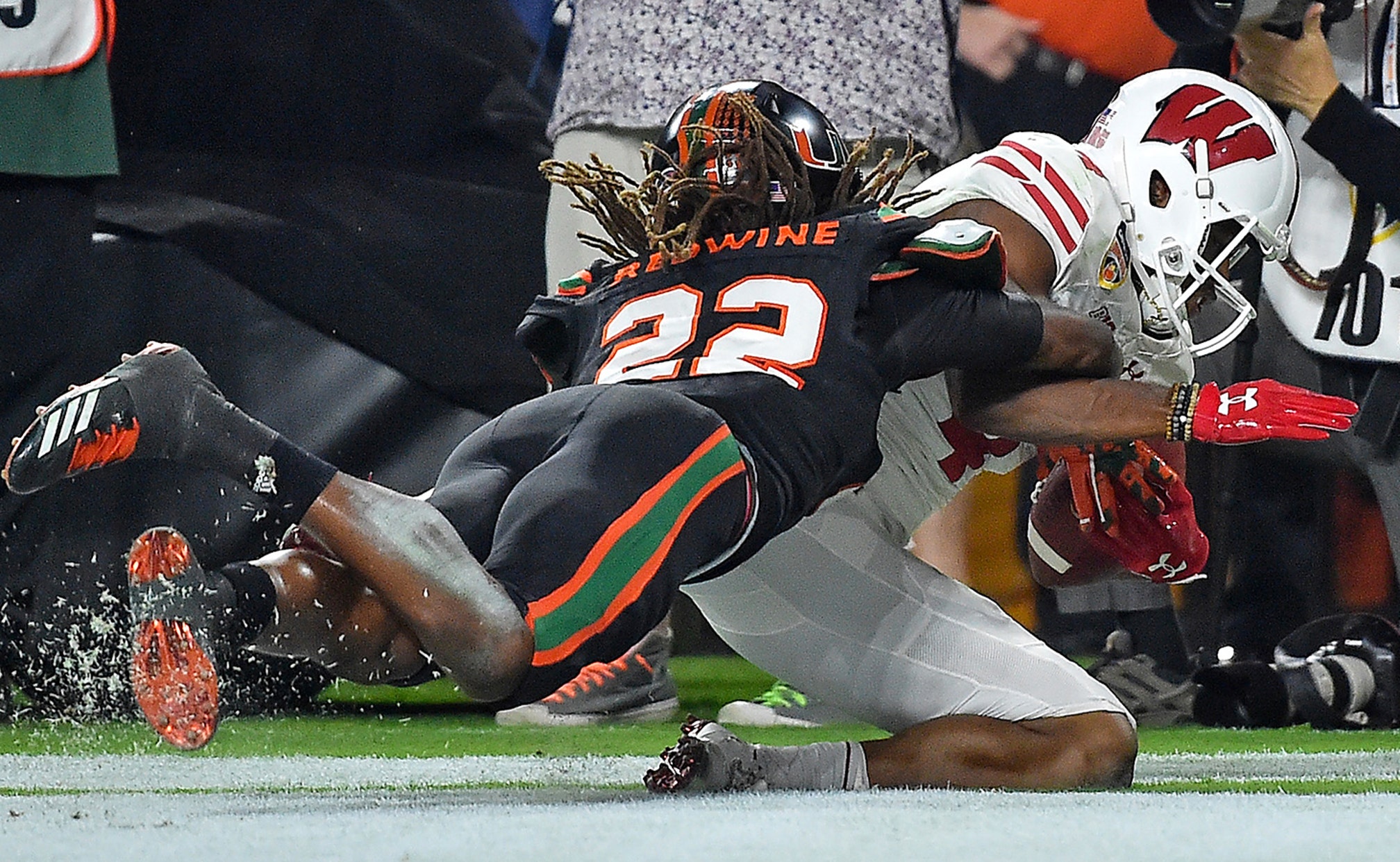 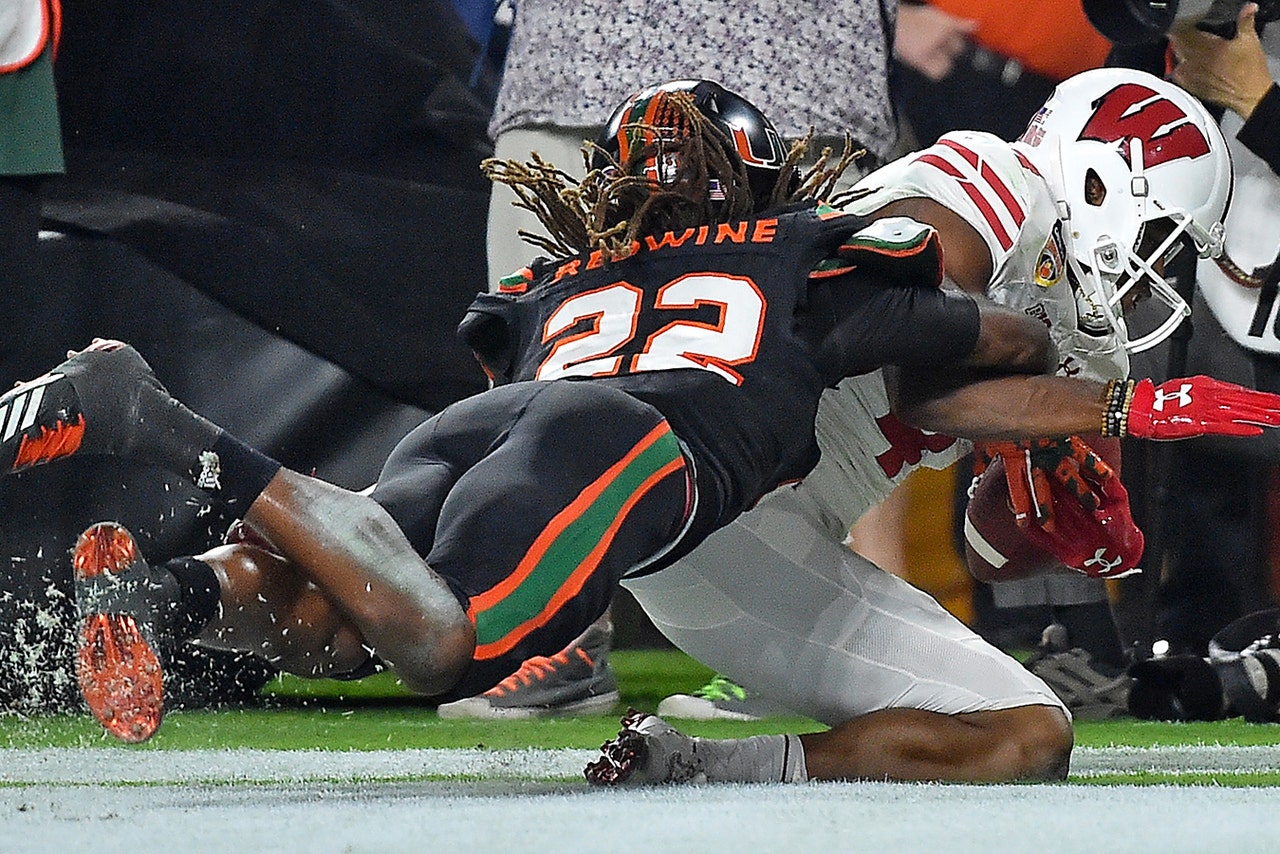 MIAMI GARDENS, Fla. (AP) -- Alex Hornibrook's first pass of the night was a wobbler, one that seemed to slip out of his hand.

Nearly everything else he threw was just about perfect.

Hornibrook threw four touchdown passes, three to Danny Davis, and No. 6 Wisconsin capped off the winningest season in school history by topping No. 11 Miami 34-24 in the Orange Bowl on Saturday night.

"We were pretty relaxed," Hornibrook said. "We knew we had what it takes to win this game."

And the Big Ten -- shut out of the College Football Playoff after Wisconsin lost to Ohio State in the conference title game -- moved to 7-0 in bowls this season.

"You play the whole season and you earn what you get and I'm proud of this team," Wisconsin coach Paul Chryst said. "They can call themselves Orange Bowl champions. That's pretty big."

Jonathan Taylor ran for 130 yards on 26 carries for the Badgers (13-1), who rallied from an early 14-3 deficit. Taylor finished the year with an FBS-freshman-record 1,977 yards. A.J. Taylor also had a scoring catch for Wisconsin.

"I take as much responsibility as anybody, actually more because I'm in charge of everything," Richt said. "I didn't coach good enough and we will get better. I can promise you that."

The Badgers dominated time of possession, holding the ball for nearly 40 minutes. Hornibrook completed 23 of 34 passes for 258 yards, going 20 for 25 in the final three quarters.

Travis Homer and Deejay Dallas had rushing scores for Miami (10-3), which lost on its home field for the first time in 2017. Lawrence Cager had a touchdown catch for the Hurricanes, while quarterback Malik Rosier was 11 for 26 passing for 203 yards -- with three interceptions.

The Hurricanes had a chance to get within a touchdown midway through the fourth, but Michael Badgley's chip-shot field goal went off the right upright. By the time Miami got the ball back, most of their fans were gone and only 1:37 remained. Rosier was picked off for the third time 18 seconds later, and the Badgers ran out the clock.

"They did a really good job making me throw balls into tight coverage," Rosier said.

Homer went in from 5 yards out to give Miami the early lead, and Dallas' 39-yard scamper for a score out of the wildcat formation pushed the Hurricanes' edge to 14-3 late in the first quarter.

Rosier's pass was intercepted by Wisconsin's Andrew Van Ginkel on the first play of the second quarter, and the game quickly changed. Hornibrook threw touchdown passes on three consecutive possessions -- two to Davis, one to A.J. Taylor -- and the Badgers held the ball for more than 11 minutes in that quarter alone on the way to taking a 24-14 lead into the half.

Richt was flagged for unsportsmanlike conduct just before the third of those scores, after losing his cool while arguing with officials about what replays showed was a missed holding call that would have pushed Wisconsin back. He grabbed at head linesman Gus Morris -- part of the SEC crew on the game -- while pleading his case, as Miami security personnel unsuccessfully tried to keep him calm.

"Apologies to anyone who can read lips," Richt said.

The Hurricanes got within three points twice in the second half, the first coming when Rosier bought some time and lobbed the ball to a wide-open Cager for a 38-yard score. Rosier tried to connect with Cager again later in the third, but got intercepted again on a play where the Hurricanes thought Cager got held as he neared the end zone.

Hornibrook and Davis connected on a scoring play for the third time with 7:44 left, the Badgers weren't threatened again, and started talking about a title run in 2018 right afterward.

"We're all coming back," Hornibrook said. "But nothing is going to happen if we don't put in the work."

Wisconsin: Hornibrook became just the third Badgers quarterback in the last 15 years to have multiple games with at least four touchdown passes in the same season. Scott Tolzien had a pair of four-TD games in 2009, and Jim Sorgi had games of four and five TDs in consecutive weeks back in 2003. From 2012 through 2016, the Badgers never had a quarterback throw for four scores in a game.

Miami: The Hurricanes were on a four-game losing streak last season, then started what became a 15-game winning streak that ended in the regular-season finale against Pitt, and now will take a three-game slide into 2018. The four touchdown passes allowed matched the most allowed by Miami in any game since Oklahoma threw for six TDs in a 2007 romp over the Hurricanes.

Rosier's third-quarter touchdown pass to Cager was the 31st touchdown he's accounted for this season, a Miami single-season record. The previous mark was 30, set by Vinny Testaverde in 1986.

Hornibrook is the great-nephew of former Miami quarterback John Hornibrook, who was under center for a memorable play in Hurricanes history. John Hornibook ran in for a touchdown against Florida in 1971, on a play dubbed the Gator Flop -- one where every Florida defender fell to the ground in order to let Miami score and get the ball back so Gators quarterback John Reaves could break the NCAA career passing record. The ploy worked.