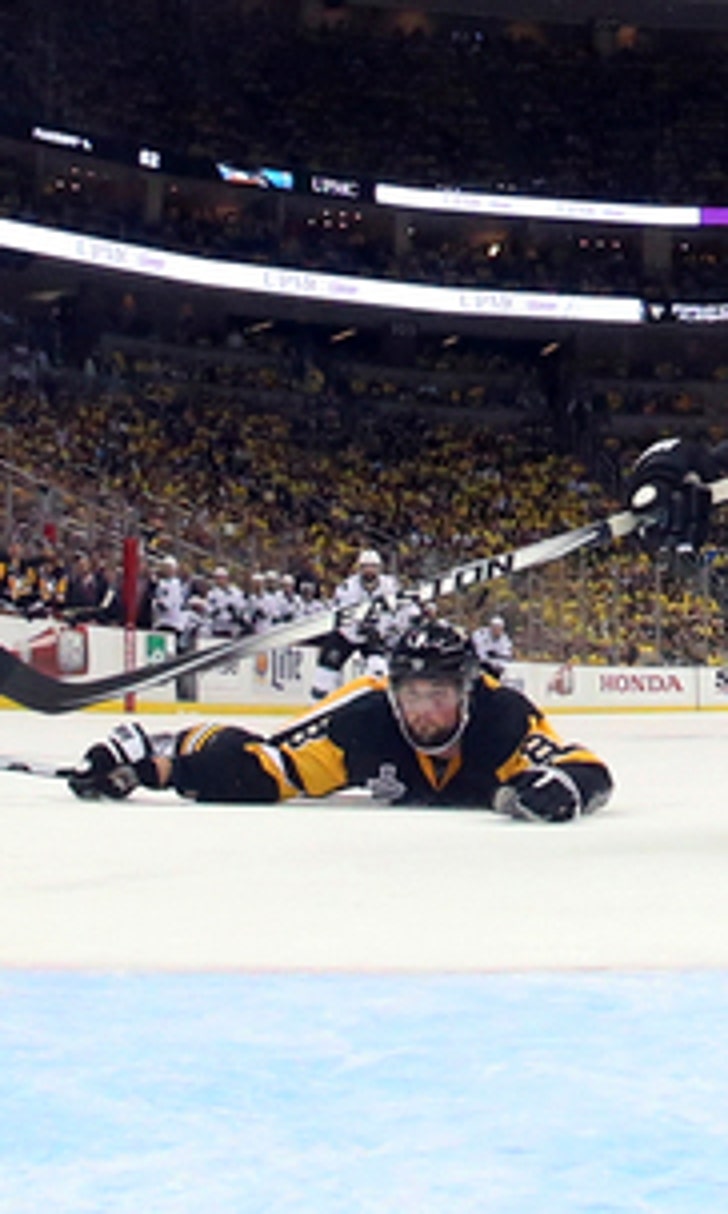 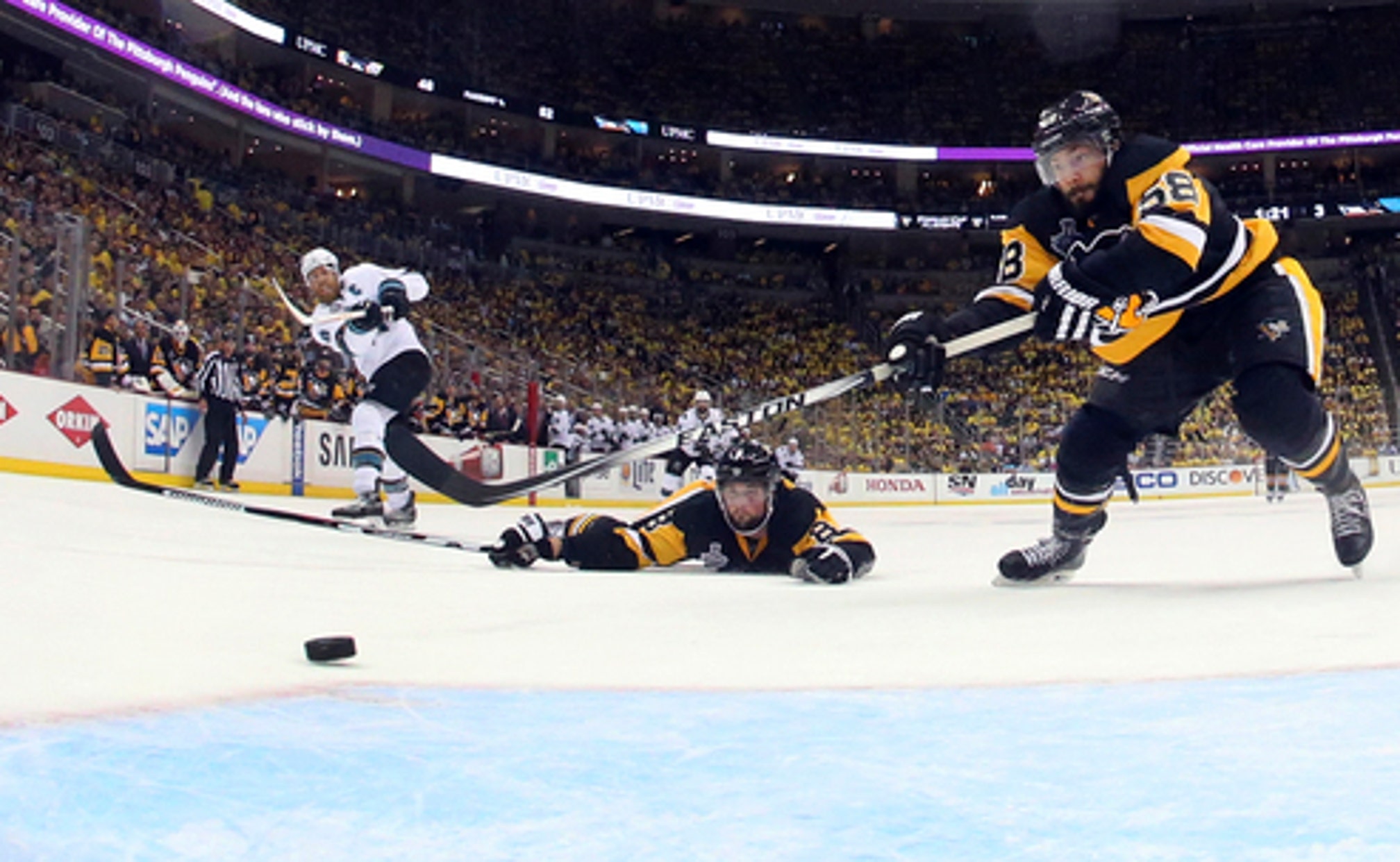 The Latest: Sharks and Penguins open Game 6 with a slash 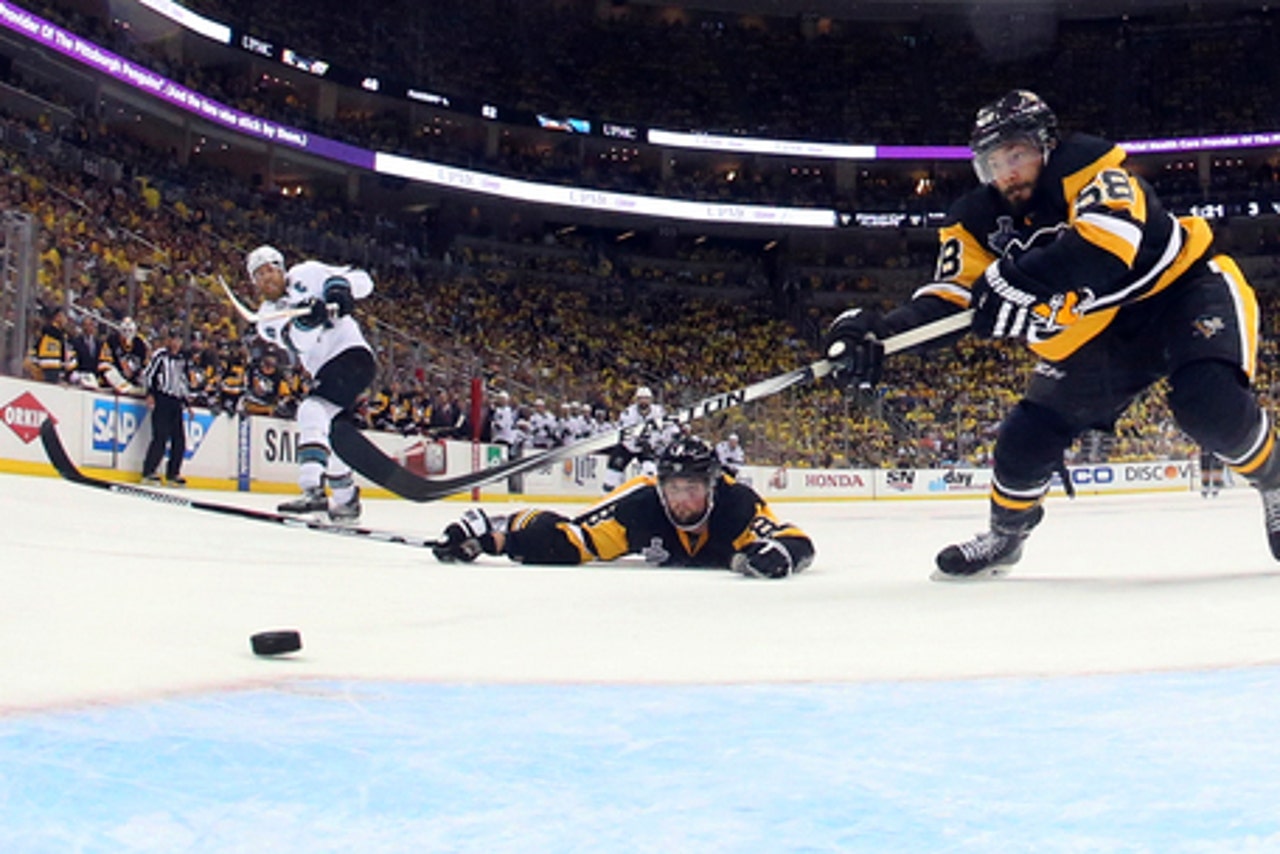 SAN JOSE, Calif. (AP) The Latest on Game 6 the Stanley Cup Final between the Pittsburgh Penguins and the San Jose Sharks. The Penguins lead the series 3-2 (all times PDT):

The puck has been dropped for Game 6 of the Stanley Cup Final. The Penguins are trying to win their fourth Cup in franchise history.

San Jose's Joe Thornton won the opening faceoff against Pittsburgh captain Sidney Crosby. Then Crosby slashed Thornton and the two got into it in the first few seconds.

Before the game started, public address announcer Danny Miller offered condolences to the victims of the nightclub shooting in Orlando on behalf of the Sharks, Penguins and the NHL. Fans at SAP Center observed a moment of silence.

A tribute to Gordie Howe, who died Friday at age 88, was expected to occur before the second period.

Martin Jones and Matt Murray have led the San Jose Sharks and Pittsburgh Penguins onto the ice at SAP Center for pregame warm-ups for Game 6 of the Stanley Cup Final.

Murray is one victory away from tying Patrick Roy, Ron Hextall and Cam Ward for the most victories by one goaltender in a single postseason. Murray has 14 of Pittsburgh's 15 victories so far, after Jeff Zatkoff started the playoffs.

Two days after the death of Gordie Howe, ''Mr. Hockey'' is being honored at Game 6 of the Stanley Cup Final.

Howe's No. 9 was displayed with a series of teal and white shirts at SAP Center on Sunday. Several current players have said they wear No. 9 because of Howe, who died Friday at age 88.

The San Jose Sharks and Pittsburgh Penguins will wear Howe decals on their helmets during pregame warmups. The red decals say, ''Gordie Howe, Mr. Hockey,'' with the No. 9 and the Detroit Red Wings logo.

The Pittsburgh Penguins will try to wrap up the fourth Stanley Cup in franchise history on the seventh anniversary of their last championship.

After missing their first opportunity at home Thursday, the Penguins are up 3-2 in the Stanley Cup Final and can finish off the San Jose Sharks on the road in Game 6 on Sunday night. Seven years ago, Sidney Crosby, Evgeni Malkin and Co. beat the Detroit Red Wings in Game 7.

Defenseman Ben Lovejoy was on the roster in 2008-09 but didn't participate in the playoffs.

Crosby, Malkin, forward Chris Kunitz, defenseman Kris Letang and goaltender Marc-Andre Fleury are the only Penguins players left from that Cup team. Fleury has spent this series backing up 22-year-old rookie Matt Murray, who has a .916 save percentage in the series.

Coach Peter DeBoer said the Sharks will be without forward Tomas Hertl for the fourth consecutive game. Hertl has an undisclosed injury.

San Jose is trying to become the seventh team in 33 chances to force a Game 7 when down 3-1 in the Cup Final. Only the Toronto Maple Leafs in 1942 went on to win the series.