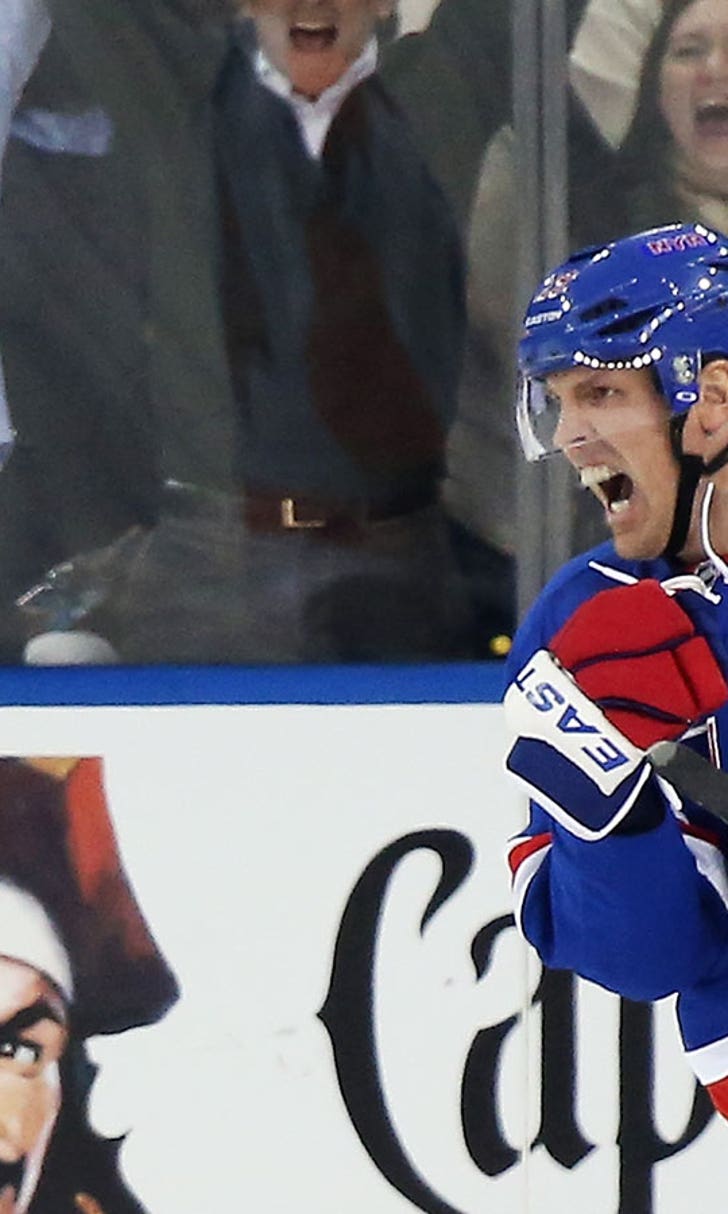 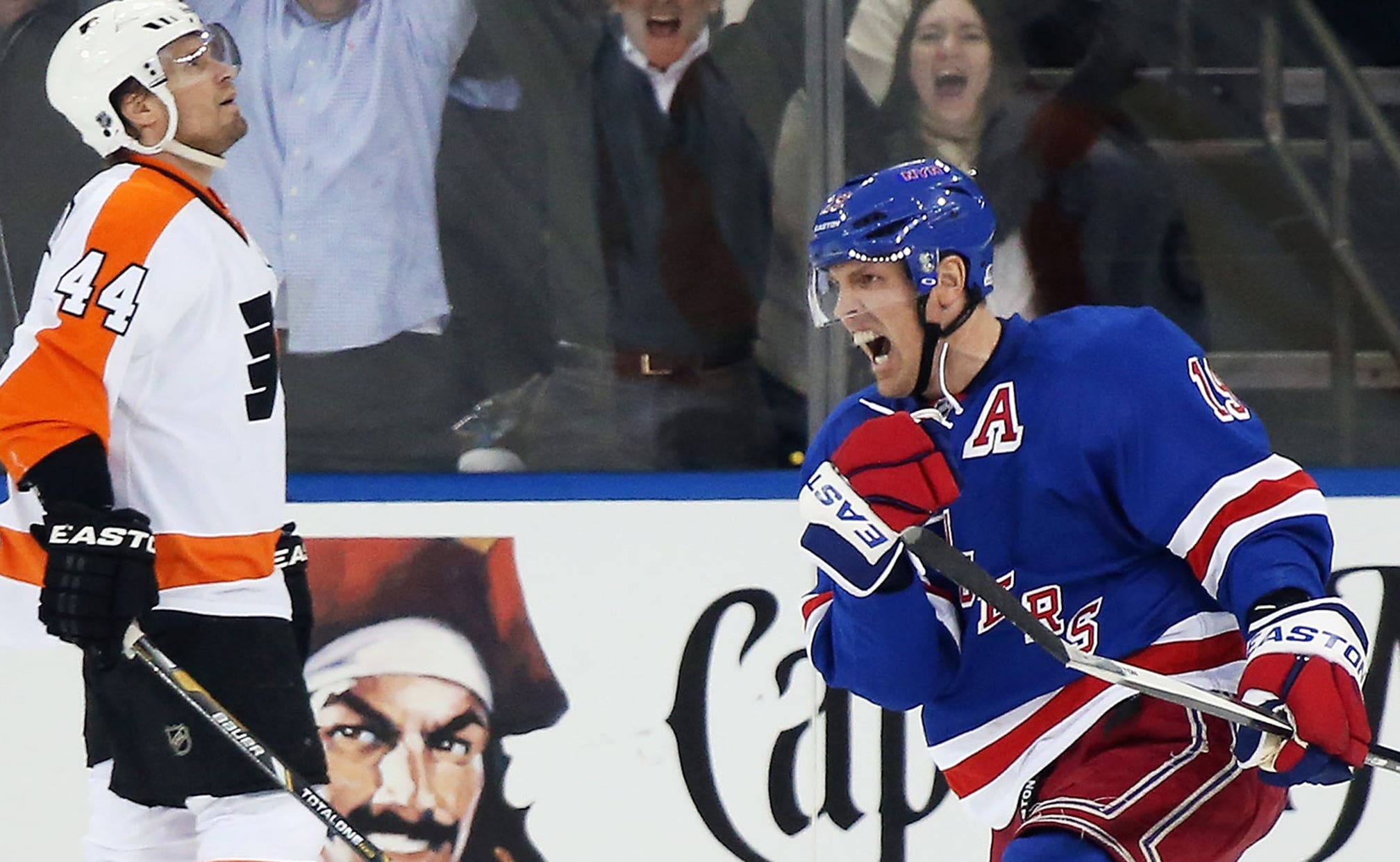 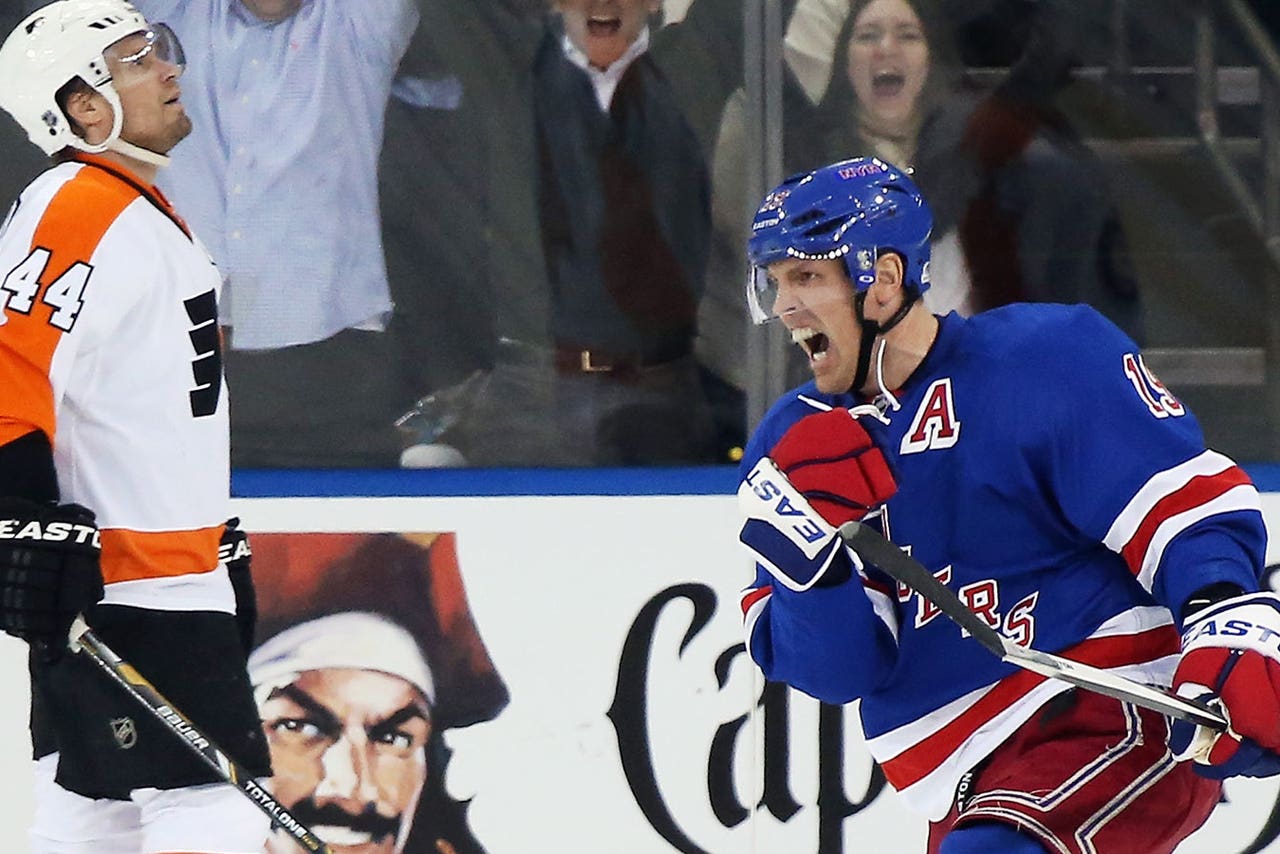 Carl Hagelin's contribution to the New York Rangers' playoff-opening win was etched all over his busted-up mouth.

Some efforts don't directly show up on the score sheet.

Hagelin took a high stick from Philadelphia's Jason Akeson with 7:35 left, and had his mouth cut open. That gave the Rangers a four-minute power play, and they made the most of it.

Brad Richards and Derek Stepan scored 47 seconds apart, and the Rangers beat the Flyers 4-1 on Thursday night to stretch their home-winning streak over rival Philadelphia to nine games.

"He got me pretty good, but I will take that," Hagelin said with a smile through his injured mouth. "Anytime that happens, you're ready to take one for the team, especially on a day like this when it's tied."

Hagelin said the double penalty was called when the referee saw he was bleeding a lot. No stitches were required to close the wound.

The effect on Akeson remains to be seen. The 23-year-old forward was called up for the Flyers' final game of the regular season for the second straight year. He has played in only three career NHL games.

"I went to hit him, and my back leg swung out and my stick came up," Akeson said. "It was unfortunate. It's not like I went out there trying to take a four-minute penalty. It was a sick feeling watching them score."

Richards gave the Rangers their first lead when a rebound of Martin St. Louis' shot came to him, and he fired it in from the right circle, punctuating the moment with an emphatic fist pump at 8:22.

Richards and St. Louis hooked up again to help set up Stepan's insurance goal. New York worked the puck around the Philadelphia end, and Richards faked a drive. He instead sent a hard pass to Stepan for a shot into the open left side.

"If you don't score or don't get momentum there, it can go the other way pretty quickly, and they can build off that," Richards said. "One was huge, but to be able to go back out there and get the other one, obviously that won us the game."

Defenseman Andrew MacDonald had given the Flyers a 1-0 lead in the first, but the Rangers answered with Mats Zuccarello's goal.

Hagelin pushed New York's edge to 4-1 with 4:08 left off another assist from Richards.

Henrik Lundqvist made 14 saves for the win. Ray Emery, subbing for injured No. 1 goalie Steve Mason, stopped 32 shots in the loss. The Flyers had one shot in the third period.

"I thought we were in good position tied going into the third, and obviously we would like to have a better third period, but it's a long series," Emery said. "We came in here for two games, we have to get one.

"We would like to get one. We thought it might be that one, but I guess it will be the next one."

Game 2 of the best-of-seven series is Sunday in New York.

The Rangers haven't lost to Philadelphia at Madison Square Garden since March 6, 2011, outscoring the Flyers 35-10 in that span.

The Flyers took the lead on their first shot, after allowing four, following a big hit by Scott Hartnell on defenseman Ryan McDonagh to free the puck in the offensive zone.

MacDonald, a trade deadline acquisition from the New York Islanders, wound up for a slap shot on the playoffs logo and sent the puck sailing past Lundqvist after it hit St. Louis in flight at 7:28.

As the shot flew past him, McDonagh -- who struggled with the puck several times in the opening period in his first game in April 1 -- hit Claude Giroux in the side with his stick, sending the Flyers captain to the ice. Giroux was down on all fours before gingerly skating to the bench. He returned to action.

"I was not myself, and just couldn't get a good grip on the puck, couldn't feel my skates," said McDonagh, who missed five games because of an injured shoulder. "The guys stayed positive with me and I found a way to contribute."

The Rangers got even with 9:07 left on a strong, determined effort by Zuccarello. Benoit Pouliot skated in search of space and lost the puck off his stick in the left circle. Zuccarello swooped in, got the puck and fired a hard shot that Emery blocked away. While in stride, Zuccarello got the puck back and deftly slipped in a backhand for his second career NHL playoff goal.

Rick Nash had five of New York's 14 shots in the first, mostly from long range, and nearly matched Philadelphia's total of six in the frame.

Both teams generated chances in the second period, but no goals. The Rangers again led in shots, but by a slight 9-8 margin.

NOTES: Mason showed more improvement Thursday and was in attendance for the game. Flyers coach Craig Berube said he doesn't know if Mason will play in Game 2 on Sunday. ... The Flyers had their fewest shots in a playoff game since recording 14 against Montreal on April 28, 2008.