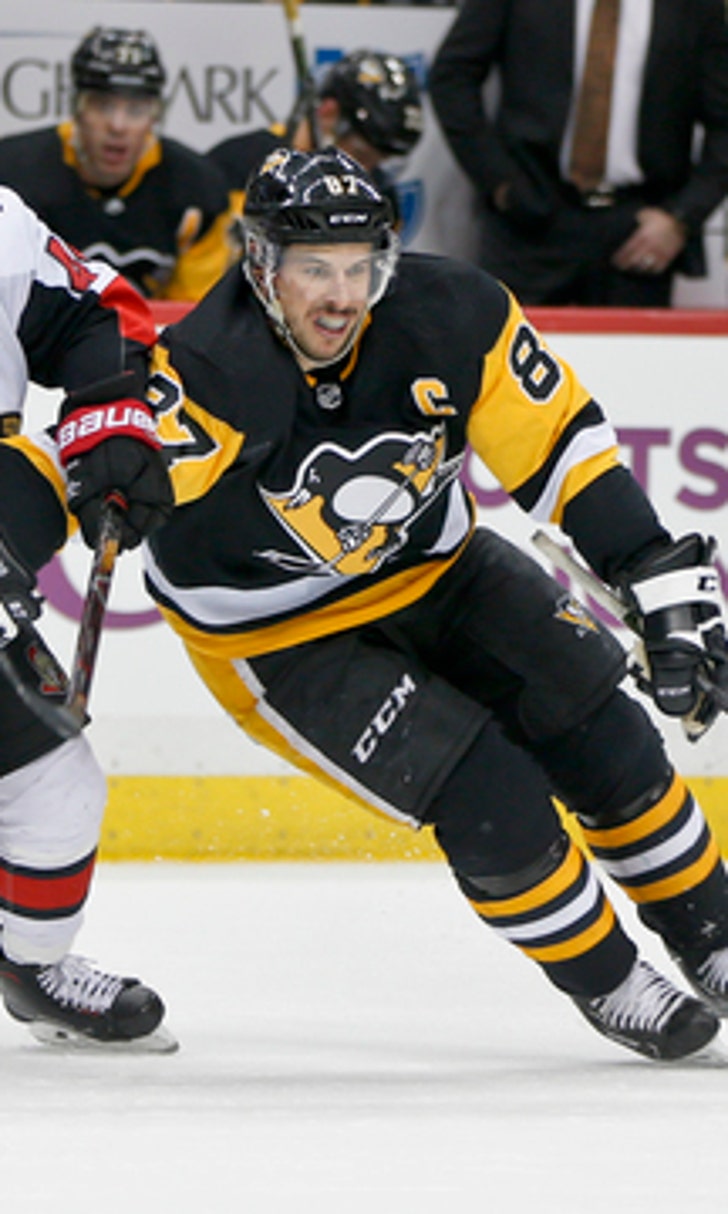 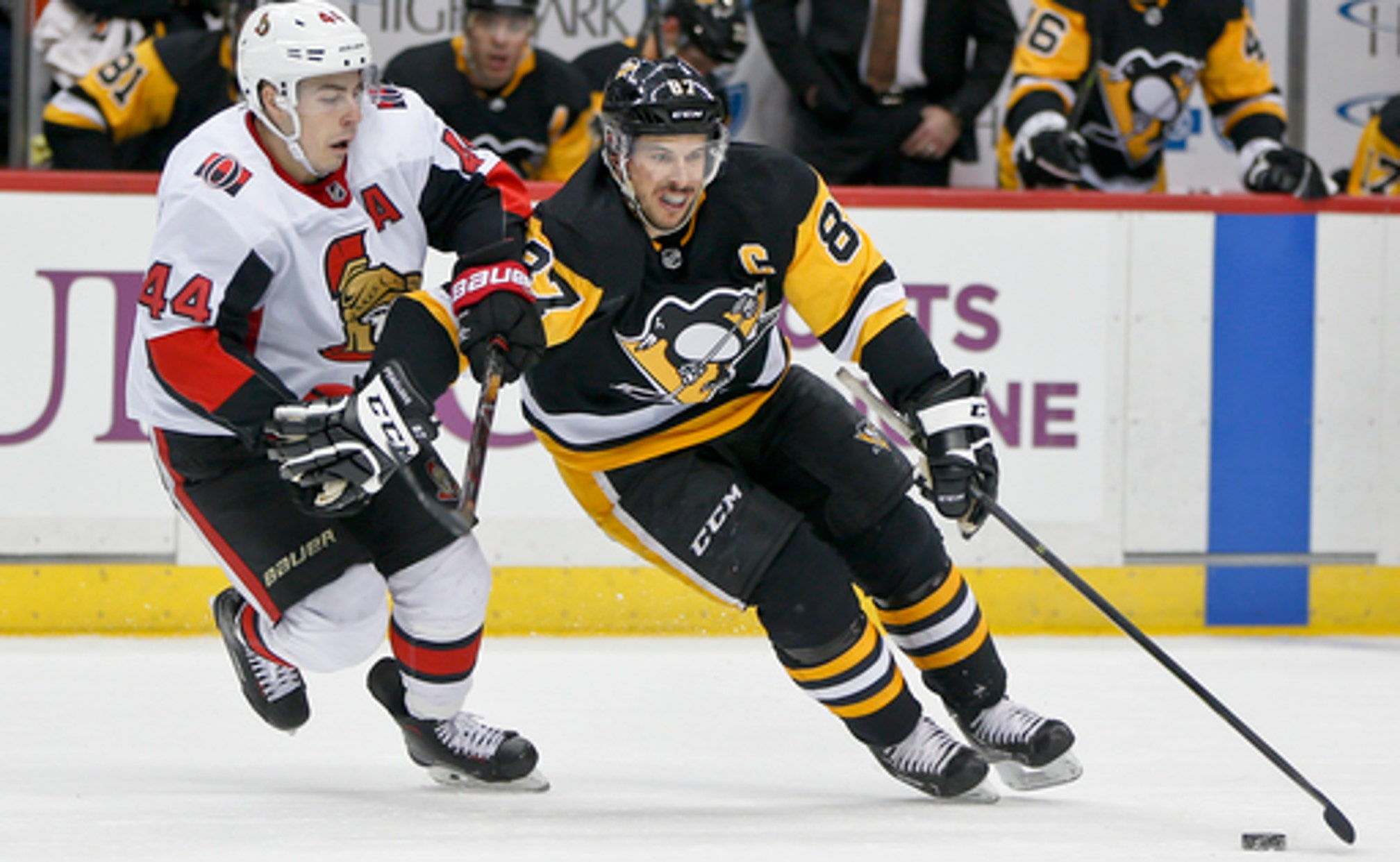 PITTSBURGH (AP) The Pittsburgh Penguins can admit it now. The regular season is kind of a drag.

Being the two-time defending Stanley Cup champions creates a target on your back that's impossible to shake. An NHL-high 19 back-to-backs left them spent. A sluggish first half forced them to focus.

No matter. The Penguins survived. And now they're heading to the playoffs with momentum and home-ice advantage in the opening round. A legitimate shot at a Stanley Cup three-peat awaits.

Sidney Crosby and Jake Guentzel banked in goals off Craig Anderson minutes apart in the second period, Casey DeSmith stopped 34 shots and the Penguins beat the Ottawa Senators 4-0 on Friday night to clinch second place in the Metropolitan Division. Pittsburgh will begin its quest to become the first team in 35 years to win three consecutive Cups at home next week against Columbus, New Jersey or Philadelphia.

''I think down the stretch we had to play in some big games,'' said Crosby, who played in all 82 games for the first time in his career. ''I think that mentality and things like that prepare you for the playoffs. I think we did a good job, won some close games and got some important points.''

Phil Kessel got his 34th goal and Patric Hornqvist pushed his career-high to 29 when he beat Anderson late in the third period for the Penguins, who reached the 100-point plateau for the third straight year and ninth time in 11 seasons.

Not bad for a team that found itself in 10th place in the Eastern Conference in early January.

''This has been a challenging year for us in a lot of ways,'' Penguins coach Mike Sullivan said. ''What I love about this group is when the stakes get high, we play at our best.''

Anderson finished with 19 saves but was beaten twice from behind the goal line in the second period as the Senators lost for the ninth time in 11 games.

Crosby was standing just off the right post when he fired a shot that smacked off Anderson's left pad and into the net 1:25 into the second period. The move is becoming a signature for the two-time MVP.

''Unfortunate, but we've seen him do that before,'' Ottawa defenseman Cody Ceci said. ''He's a skilled player and can make that play from behind the net.''

Guentzel scored from nearly the same spot just over six minutes later, flicking a rebound off the end boards that hit Anderson's left leg and skittered in for his 22nd of the season.

That was more than enough for DeSmith, given the start a night after top goaltender Matt Murray played in a draining overtime victory over the Blue Jackets. DeSmith was sharp throughout while picking up his first career shutout, and by the time Kessel took a slick feed from Riley Sheahan and fired it into the open net 6:55 into the third the Penguins could turn their attention to the postseason.

''If we can play that kind of defense in the playoffs, we'll win a lot of games,'' DeSmith said. ''Hopefully it carries over.''

Ottawa and Pittsburgh met in the Eastern Conference finals 10 months ago, with the Penguins winning on an overtime goal in Game 7 before going on to beat Nashville for the franchise's fifth Cup. The Senators hoped it would be a springboard to becoming perennial contenders. Instead they will miss the postseason for the third time in five years.

''''It's tough right now with the guys we're missing, but it just allows other guys to step up and fill in,'' Ceci said. ''It's a great opportunity for them.''

While Ottawa will head home for the spring and summer this weekend, the Penguins will take aim at history now that the long six-month slog of the regular season is behind them.

''We're looking forward to the fun part of the season,'' defenseman Justin Schultz said. ''We're ready to make another run at it.''

NOTES: Both the Senators and Penguins wore a butterfly decal with the initials ''JP'' on the back of their helmets to honor an Ottawa-area teen and longtime Senators fan who died this week due to a rare and debilitating skin condition. Jonathan Pitre, 17, was nicknamed ''''Butterfly Boy'' and developed a close relationship with the team after sharing his battle with epidermolysis bullosa. ... Kessel played in all 82 games this season and has played in 692 consecutive games, the third-longest active ironman streak in the league. ... The victory was head coach Mike Sullivan's 200th in the NHL. ... The Penguins finished the regular season 68 for 260 on the power play (26.2 percent). The percentage was the best in franchise history, passing the 26.0 percent mark set in 1995-96.

Senators: Finish up the season in Boston on Saturday.

Penguins: The first round of the playoffs next week. Pittsburgh has won at least one playoff series in four of the last five seasons.